How Important is the Last Saturday of Early Voting in NC?

With the recent bill in the North Carolina General Assembly making changes to the 'absentee by mail' process of voting in North Carolina, a provision was inserted that garnered bi-partisan support to include the last Saturday before Election Day as an 'early voting' day. The provision was likely in response to a lawsuit, filed by national and state Democrats, seeking to have the last Saturday included in the state's early voting period. The Saturday before Election Day had typically been the last day of early voting in the state.

In looking at the past four general elections (2012, 2014, 2016, and 2018), the early voting period saw the largest percentages of votes being cast by "absentee onestop," otherwise known as 'absentee in-person'; the other method of 'early voting' in North Carolina is absentee by mail. But how great a role has the last Saturday of in-person early voting played in these past elections, and in particular, what kind of impact has black/African American voters had in utilizing this form of convenience voting? 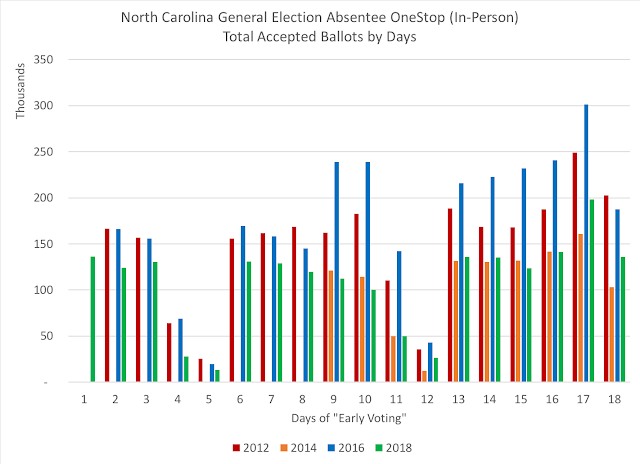 Total Numbers of Daily Absentee OneStop (Early In-Person) Ballots Accepted,
based on Days Counting Down in the Early Voting Period
(Data from NC State Board of Elections)

As noted in the chart above, the greatest number of in-person absentee ballots usually was on the last Friday of the early voting period: anywhere from 10 percent to 15 percent of the total ballots cast were done so on that Friday before Election Day in the four general elections.

Saturdays usually saw anywhere from 6 percent (in 2016) to 9 percent (in 2014) of the total ballots for absentee onestop voting. This may have been due to the limited hours that the last day of early voting had over the elections, something that the bill addresses and expands the polling hours from 8 AM until 3:00 PM (corrected from 7:30 PM).

Democratic state senator Floyd McKissick noted the popularity of the final Saturday for early voting, and some contend that for Black/African American voters, the day was the most popular of the voting days. The following chart shows that most black voters, however, preferred the last Friday over the Saturday to cast early ballots. 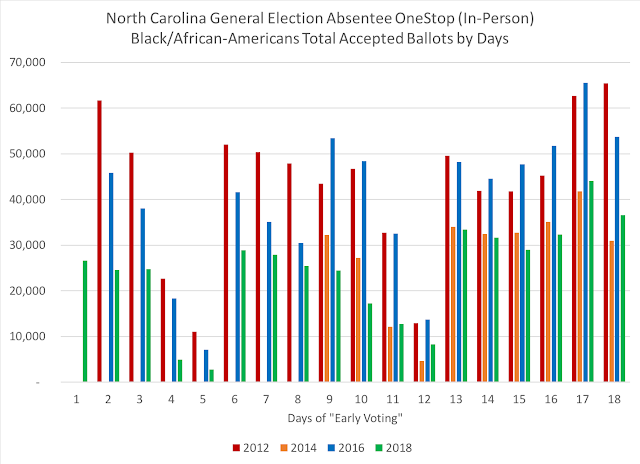 In only one election, 2012, did the number of black voters on the last Saturday exceed the numbers on the preceding Friday; for 2014 through 2018, the last Friday saw the greatest number of votes come in from African Americans.

In looking at the racial composition of daily early voting for the past four elections, black voters have seen their overall percentage of early voters decline, due to the rising popularity of early voting in the state.

In 2012, black voters were 29 percent of the total early voters, with weekend early voting seeing greater percentages than on the weekdays. 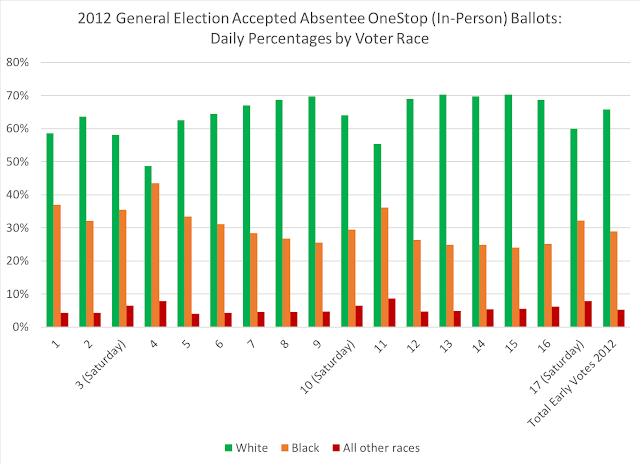 In 2012, the "Souls to the Polls" efforts increased black daily percentages to 43 and 36 percent on each of the Sundays in the early voting periods. On the final Saturday of early voting, over 65,000 black voters cast their early ballots, compared to over 62,000 who did so on the final Friday of the early voting period. Interestingly, the third highest day of black voting was on the first day, at over 61,000. However, of the past four general elections, 2012 was the only election year where the final Saturday's total exceeded the final Friday total for black voters.

In 2014, with a reduced number of days and only one Sunday, black early voters ended up being 26 percent of the total ballots cast, but again, the Sunday effort showed a significant shift in that day's voters, with 38 percent of that one Sunday's early votes coming from black voters. 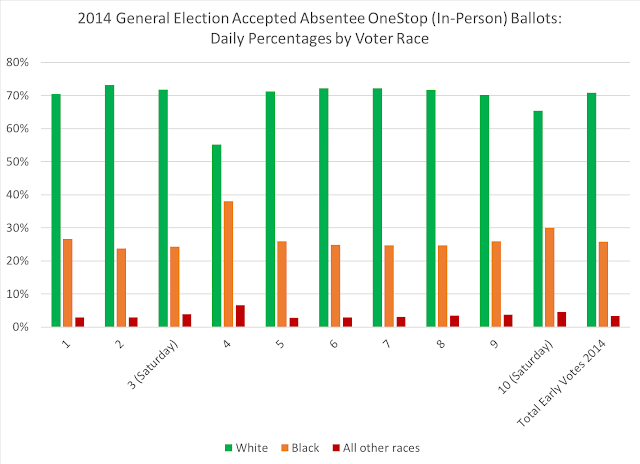 In 2016, the percentage of black early votes was 23 percent of the total absentee onestop ballots cast: 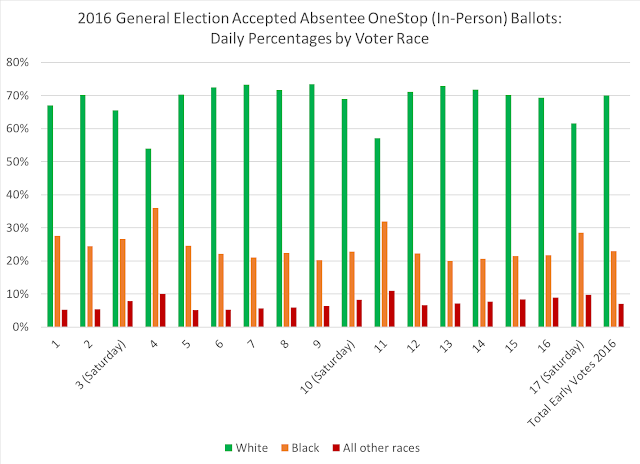 In 2018, black voters were down to 22 percent of the early votes cast in this blue-moon election (no major state-wide race, such as US Senate or gubernatorial contest). 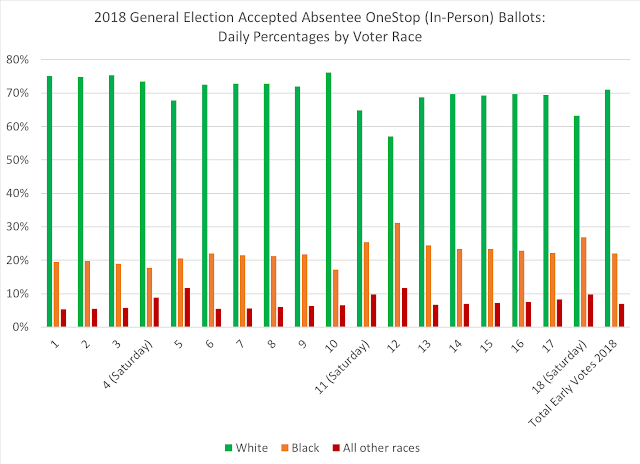 In numbers, slightly over 44,000 black voters cast early ballots on the last Friday, while 36,600 cast on the last Saturday of early voting.

With the restoration of the final Saturday before Election Day for the 2020 general election's early voting period, along with the increased polling hours, it will be noteworthy to see if the final day of voting matches or exceeds the Friday numbers, in what many will consider to be a high turnout election next year.