While the summer news has been dominated by events outside of North Carolina (well, unless you count a recent presidential rally in Greenville), the Ninth Congressional District general election, featuring Democrat Dan McCready against Republican Dan Bishop, has been steadily marching on its own path towards the finish line of the September 10th general election.

However, this race may be nationalized by events outside of the district, most notably the recent presidential feud with "The Squad" and the horrific mass shootings in both El Paso, Texas, and Dayton, Ohio.

One of the ramifications already pontificated about from these events is the impact on the 2020 election, most notably some political observers suggesting that Trump's racism and rhetorical alignment with white nationalism and supremacy and his insensitivity regarding the mass shootings may continue to push suburban voters away from the President. Amy Walter of the Cook Political Report tweeted that: 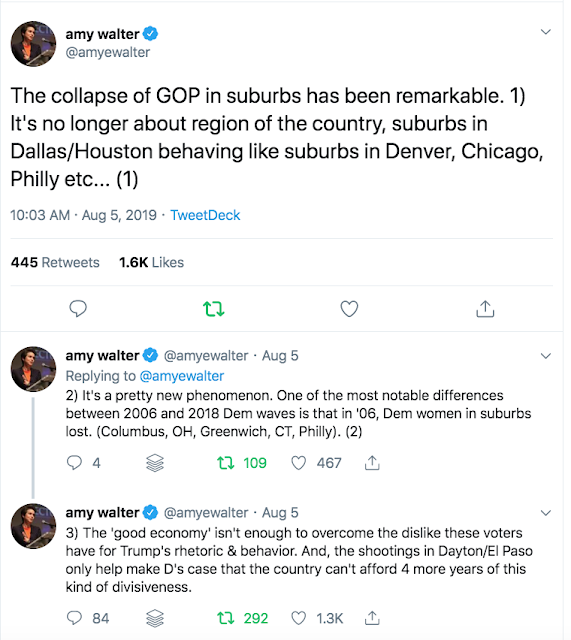 The Washington Post's Robert Costa observed that suburban voters, once reliably Republican, are now "afraid" of the President's actions in a multitude of areas, writing that:

"Trump’s incessant feuds, his hard-line position on immigration — including federal raids that left children without their parents — and the stock market’s tumult amid his trade standoff with China threaten to further alienate suburban voters ahead of the 2020 campaign, even in states that have traditionally elected Republicans."

Could the North Carolina Ninth be a potential test case for this possible suburban alienation from the president and the GOP?

In the Old North State, surrounding suburban counties to urban counties are among the most reliable Republican voting areas in the state, more so than rural counties. In fact, in 2016, all three 'regions' went further to their party allegiances than in 2012, both in total votes and in the party vote percentages: 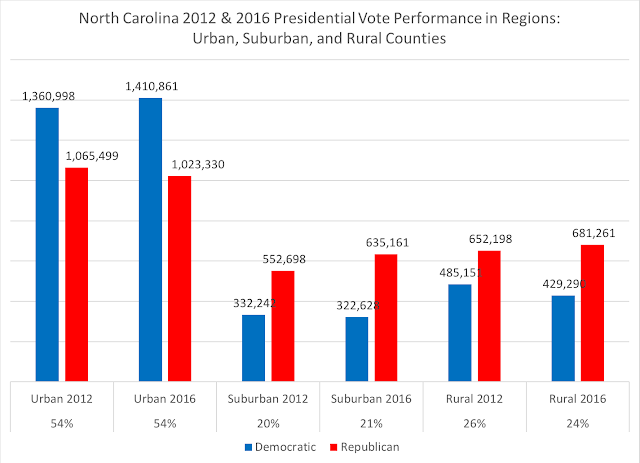 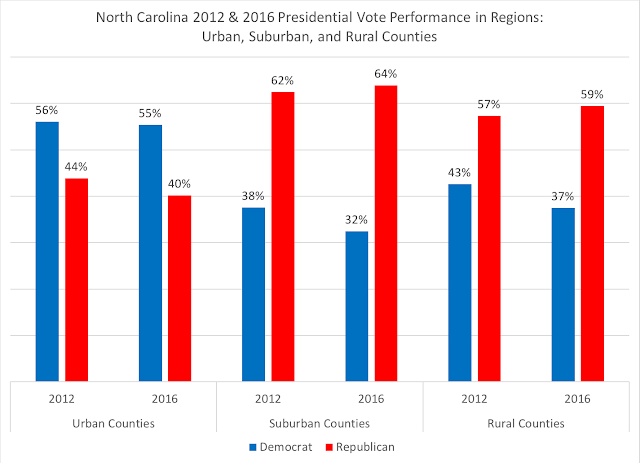 If North Carolina suburbs are transitioning from a solid Republican base to a more 'competitive' region (more likely 'leanish' Republican in my estimation), then the Ninth Congressional District may be a potential test case for whether this gives any indication as to the reaction by suburban voters to the President's actions over the past few weeks.

What the Ninth specifically provides is a test case comparison to how both Dan Bishop, an incumbent 2018 state senate Republican candidate, and Mark Harris, the 2018 Republican congressional candidate, did in overlapping precincts for both contests in south Charlotte (the traditional home base of the Republican Party in the Queen City) and the outlying 'suburban' precincts within Mecklenburg, but outside of the Charlotte city limits.

As a note, the Republican areas of south Charlotte have been significantly transitioning in their voter loyalties since 2004. The following maps give a sense of how each Mecklenburg precinct compared to the state performance of presidential candidates (the deeper the blues or reds, the greater the difference between the precinct and the state performance of a party's presidential candidate; the green precincts indicated 'toss-up'/competitive precincts): 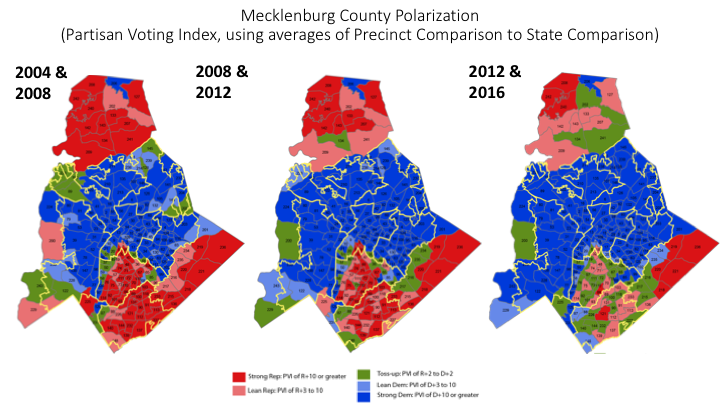 The yellow lines on each map represent the city council districts, with the bottom two in the southern Republican "wedge"/"pie slice" being the two current Republican districts (5 and 6).

In going from the 2004/2008 averaged map analysis to the 2012/2016 map, one can see a definitive trend from solid/strong Republican precincts to many more competitive precincts, some light blue precincts (lean Democratic), and some light red precincts (lean Republican). This transformation, accompanied with the "spreading" of strong Democratic precincts in the rest of Charlotte, is indicative of how hard it is now for Republicans to win city-wide.

The Ninth Congressional District has its western-most portion housed in south Mecklenburg and Charlotte: 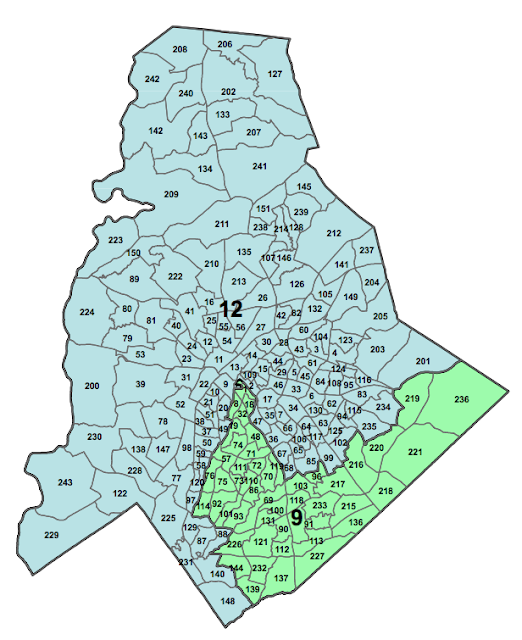 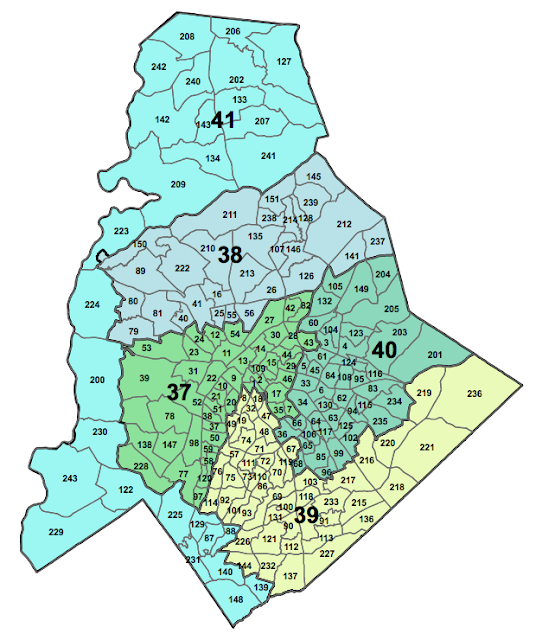 In lining up the two Republican candidate's 2018 precinct votes against one another, there is a fairly strong association (adjusted r-squared of 0.62) between the vote for Mark Harris and the vote for Dan Bishop: 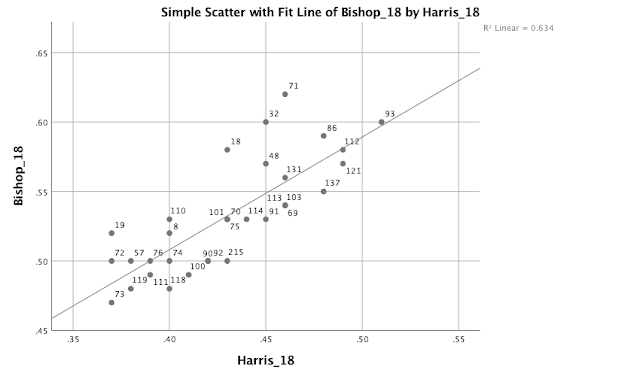 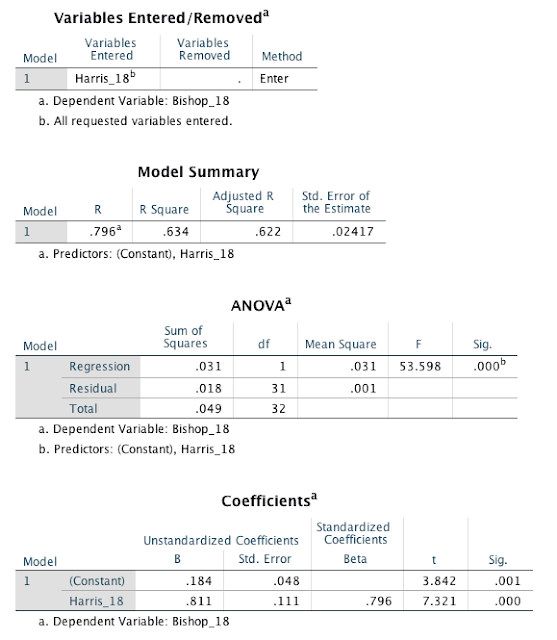 Not surprisingly, the Harris vote is statistically significant in predicting the Bishop vote in Mecklenburg County precincts for 2018's general election. The question for 2019's election then becomes: if the environment continues to move against Trump and the Republicans as a whole, what will be the impact on Bishop's 'home turf' when Mecklenburg County delivered the largest percentage (34 percent) of the Ninth Congressional District's 2018 vote total?

The district's second largest county (with 30 percent of the 2018 election vote total in the Ninth) is neighboring Union County, considered a suburb of the Charlotte metropolitan region. Union's western portion adjoins Mecklenburg County, with many commuters living in Union and working in Charlotte.

Union fits the overall NC dynamic of suburban Republican counties, with Harris garnering 59 percent of the 2018 general election vote to McCready's 39 percent. In looking at 2018's electoral performances in Union's precincts, the precincts next to Mecklenburg County went for Harris by the county total (59 percent), while the next western band of precincts went 58 percent for the Republican.

Union County will likely be the battleground county for the September 10th general election, since many of the Mecklenburg precincts will also be voting in the Democratic primaries for Charlotte city council and mayoral contests. Beyond the first question that I posed about Mecklenburg (can Bishop remain competitive in his own turf), the other major question that I have is: do we see any sign of Republican wariness towards Trump in a staunch GOP county as Union, and does Bishop suffer as a proxy vote regarding the president?

With a month to go before the September general (which won't see voter turnout at the 53 percent level that 2018's general election did), and early voting starting on August 21, the Ninth Congressional District may not necessarily attract the kind of attention it has had over the past two years, but some observers may be watching for other factors that may influence not just who wins the Ninth, but what the environment could be like in 2020 for a battleground state.
By OldNorthStatePolitics.com - August 09, 2019