For each of the congressional districts, what we have seen is a fairly even distribution of votes across the 13 districts, with the 11th and the 4th leading at 8.9 percent of all the state absentee accepted ballots cast, while the 13th and 5th has 7.4 percent of the accepted absentee (in-person and mail) ballots. First, the raw numbers of votes by voter party registration in each of the districts: 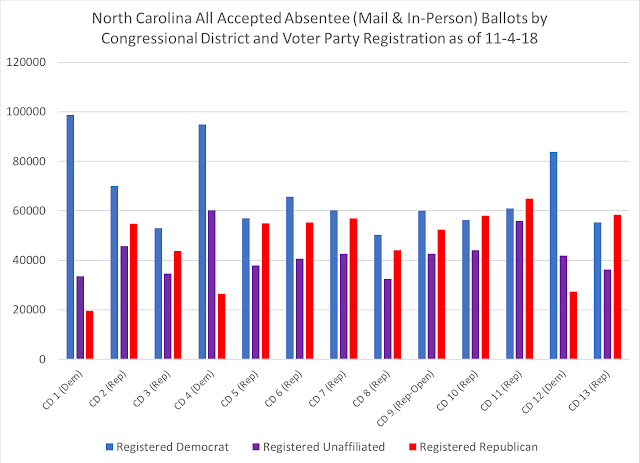 Then, by percentages of voter party registration within the district: 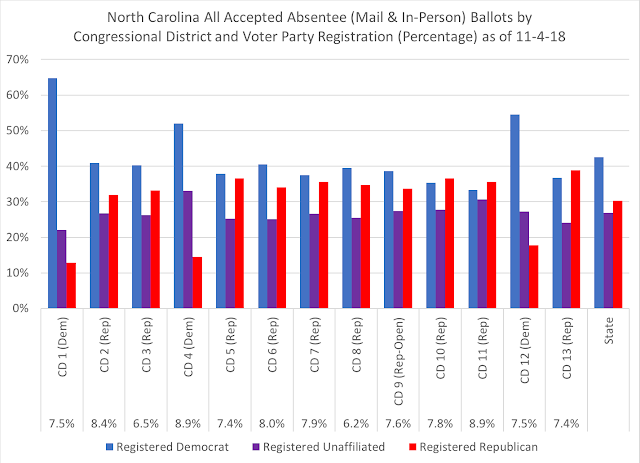 With an impressive early vote of 2 million for North Carolina's 2018 mid-term already in the bank and awaiting counting, here are some descriptive analyses of the early voters in the three competitive districts--the 2nd, 9th, and 13th--which normally would be considered safe GOP seats.

First, a look at how each of the three districts have performed in terms of voter party registration and turnout so far. First, a comparison of party registration among early voters to the district's 11-3-18 total registered voter pool (eligible voters who could participate in the electorate): 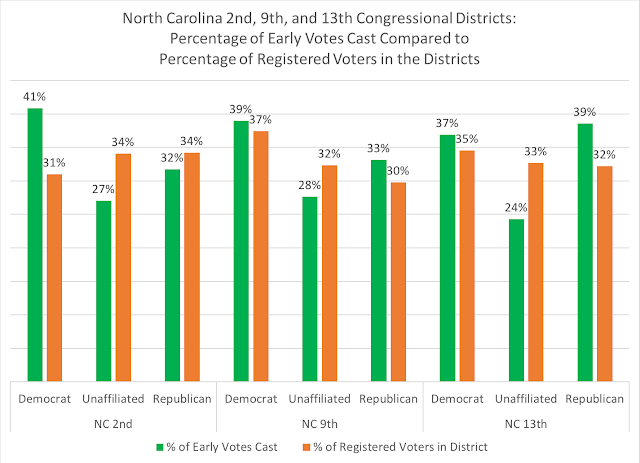 And now, by turnout rate of party registration and district total: 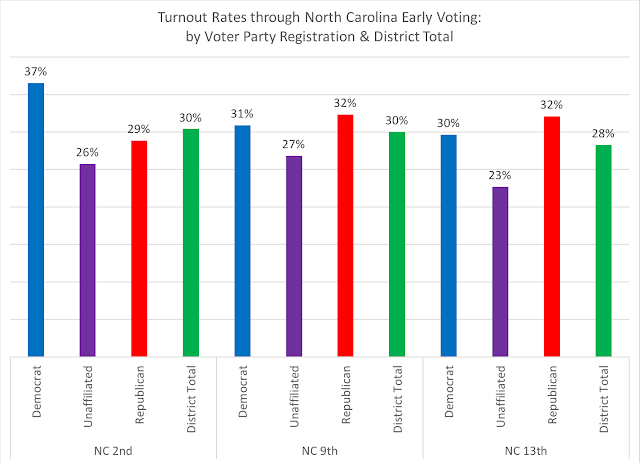 Next, looking at both early vote electorates and the district's voter pool and turnout after early voting, by voter race: 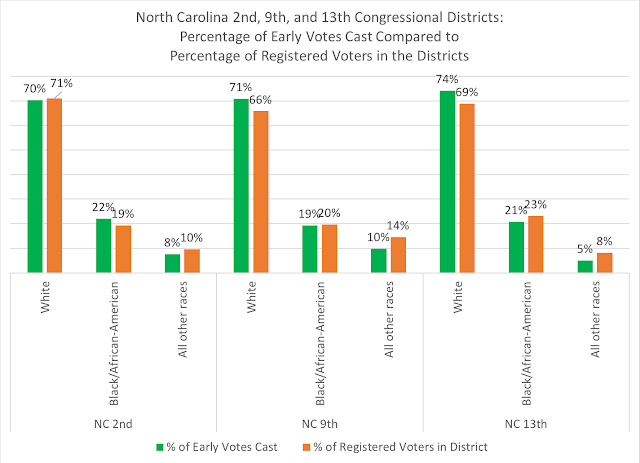 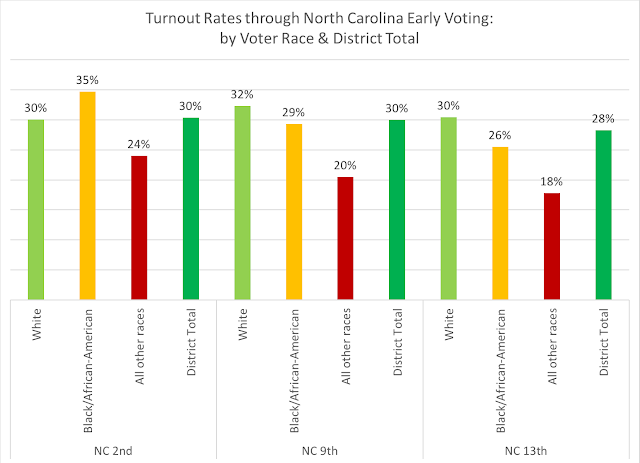 One of the key mid-term electoral dynamics may be the battle for the suburban voter, and in North Carolina, surrounding suburban counties to urban counties are more Republican in voting patterns than in rural counties. In looking at each of the three competitive districts, I broke them into "regions," based on voters inside a central city of an urban county (Raleigh inside Wake County, Charlotte inside Mecklenburg, and Greensboro inside Guilford), suburban voters inside the urban county (those voters who live outside of Raleigh but inside Wake, and so forth), and then surrounding suburban county voters, along with rural county voters.

First, the comparison to who showed up to cast early votes from the different regions in comparison to the region's percentages within the district: 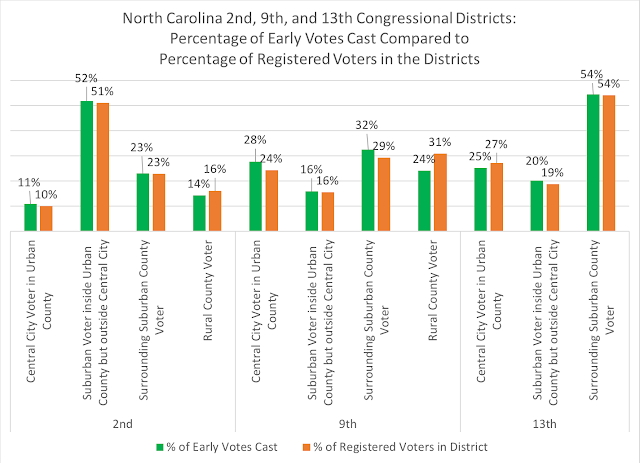 And then by turnout within each region and district: 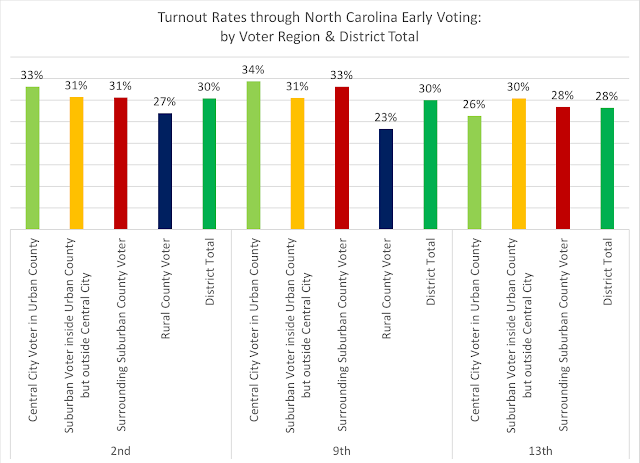 In the 2nd, urban voters (those who live in Raleigh) had the highest turnout rate in early voting, but overperformed their district percentage by only one point. In the 9th, Charlotte city voters and voters in surrounding suburban counties had higher than average turnout in early voting, and both overperformed their district percentages by 4 and 3 points, respectively. In the 13th, suburban voters in Guilford (Greensboro) county had the highest turnout rate for early voting of the three regional groups.

Finally, I looked at the age distributions for both those voters who have cast ballots in the 2nd, 9th, and 13th, versus the remaining potential 'electorate' of registered voters who didn't cast early ballots: 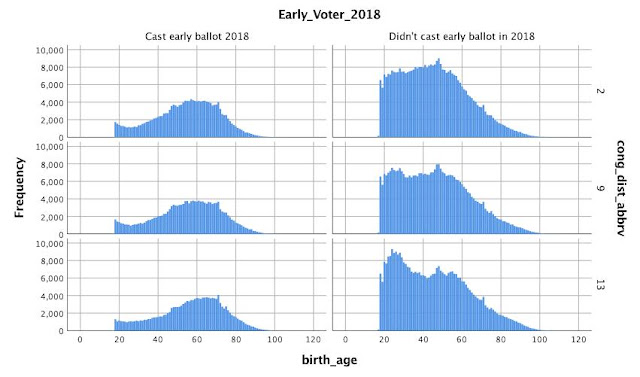 As is the case state-wide, the early votes in North Carolina skewed older: in the 2nd, the average age of early voters was 54 years old, in the 9th it was 55, and in the 13th it was 57 years old.

It should be noted that it is hard to use early votes to predict anything, other than who was interested and energized to show up to cast an early ballot. But after Tuesday's polls close, we may get a sense of how these congressional elections play out in terms of what the national and North Carolina dynamics are like in urban/suburban dominated districts, if the national narrative of the suburban voter being key in this year's mid-terms dominates in this election.
By OldNorthStatePolitics.com - November 05, 2018