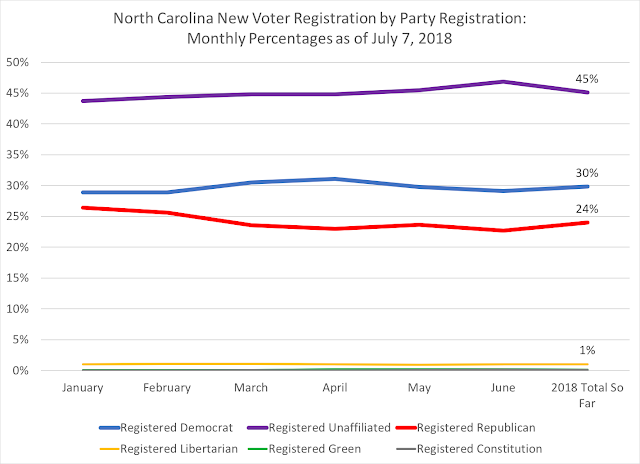 
In terms of race, North Carolina's voter pool continues to diversify, with less than 70 percent of the voters indicating that they are white: 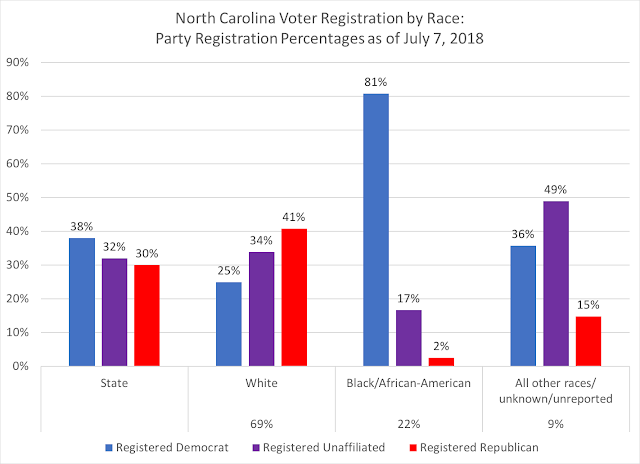 With a plurality (41 percent) of white voters registered as Republican, Democratic registration continues to dominate among black/African-American voters (81 percent), while almost a majority (49 percent) of voters of all other races (Asian, Native Indian, multi-racial, other, and unknown/unreported) registered as unaffiliated.

Among the generational cohorts, there is a distinct pattern when it comes to the younger generations and their party affiliation, or lack thereof: 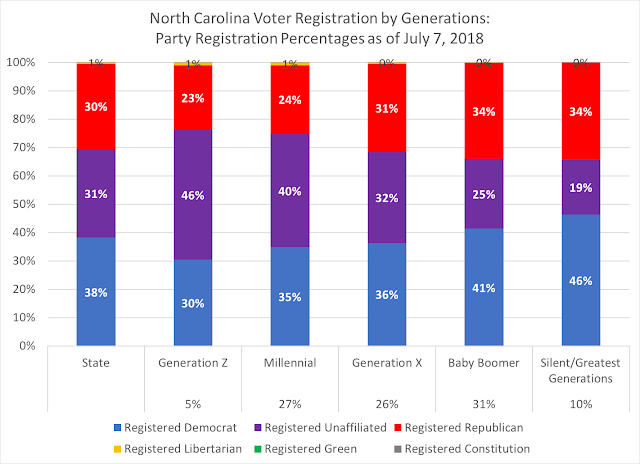 With 32 percent of the nearly 7 million registered North Carolina voters under the age of 37 years old (and thus members of the Millennial (22-37 years old) and Generation Z (18-22 years old), the rise of the unaffiliated voter can be traced back to the fact that over 40 percent of both generations have registered with neither major party. Since the beginning of 2018, these two generations have dominated the new registrations, with 57 percent of voters in the first six months of the year belonging to either the Gen Z or Millennial cohorts. 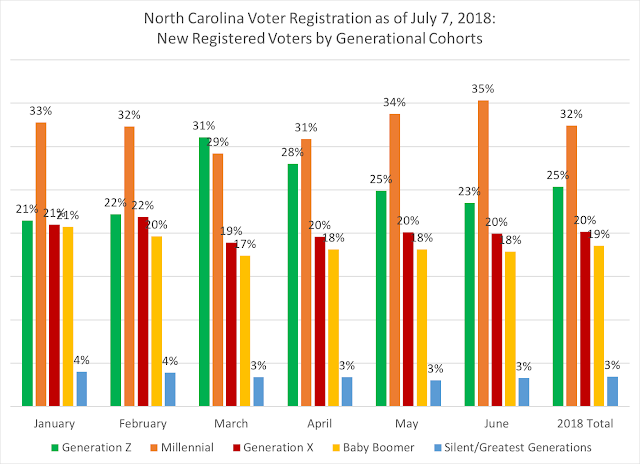 When you combine the racial and generational dynamics together, patterns emerge that help illustrate the impact of these dynamics on the voter registration pool; starting with white registered voters: 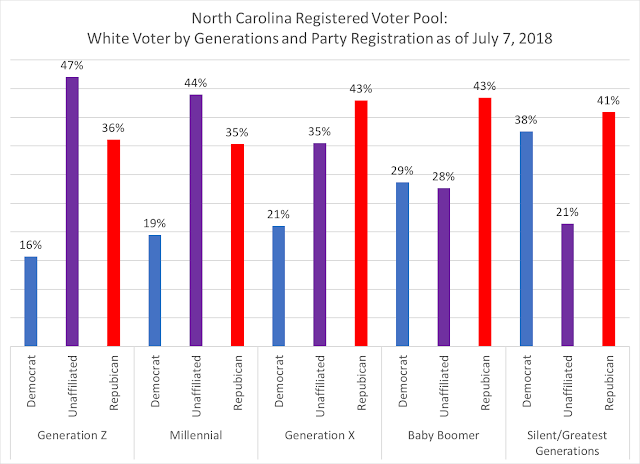 Among black/African-American voters, the potential loyalty of Democratic dominance may be waning, especially among younger black voters: 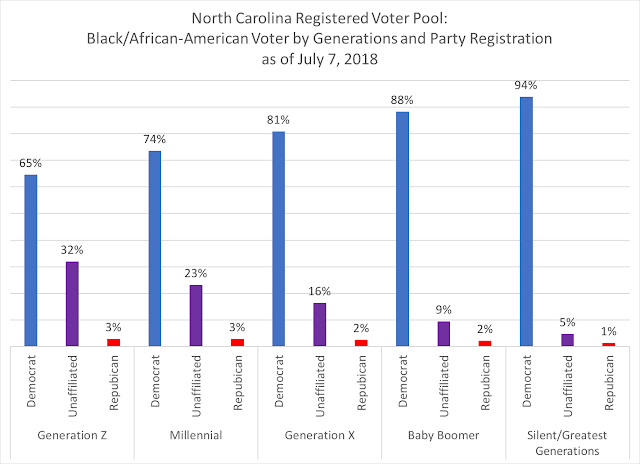 With only two-thirds of Gen Z black voters registering Democratic, this trend towards unaffiliated status may just be an undercurrent, since voting tendencies tends to still be overwhelming Democratic when it comes to black ballots.

Among all other races (and those unreported by NC voters) by generations, the downward trends among registered partisans, with the corresponding unaffiliated rise, is very clear: 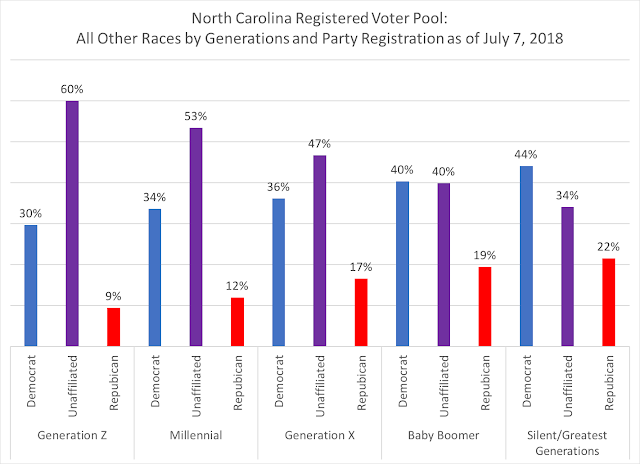 Next, the breakdown by gender of NC's registered voter pool shows an almost even match among male voters, while female voters have a distinct Democratic advantage: 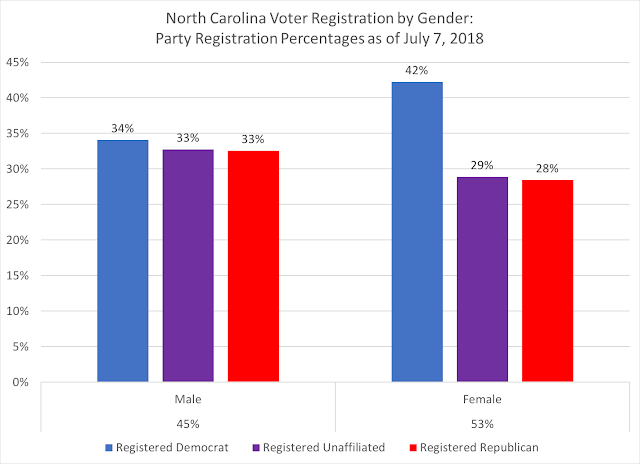 Finally, in looking at North Carolina through a urban/suburban/rural perspective, there are notable pluralities in all three regions, but one must be careful in assuming that party registration, especially in rural counties, helps one party over the other: 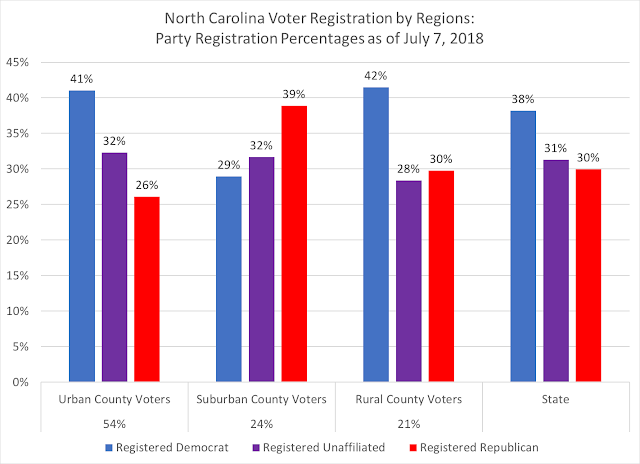 The Democratic plurality in rural counties is aided, in part, by the fact that there are two significant regions of minority-majority counties (one near the Virginia border and the other hugging the South Carolina border), along with the fact that many older white voters in rural counties may be registered Democratic, but are in fact Republican voters. To give a clearer sense of the voting patterns in these three regions, compare the 2012 and 2016 vote performances of these three groups for president: 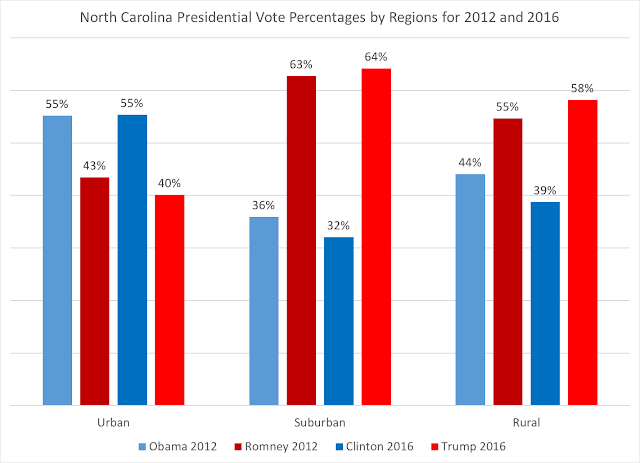 While urban counties continue their Democratic trends, Republicans dominant in both rural and, more so, in suburban NC counties. 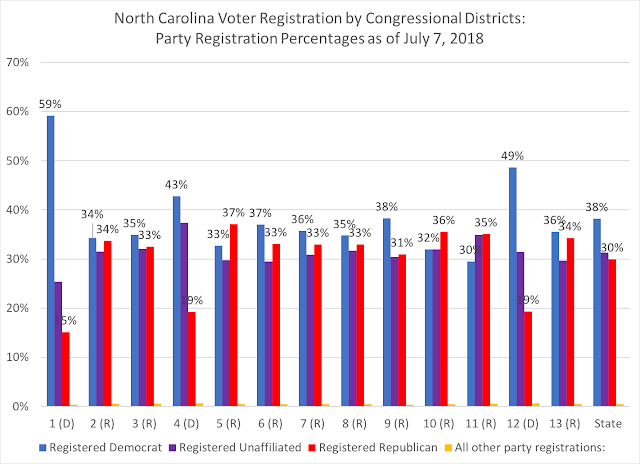 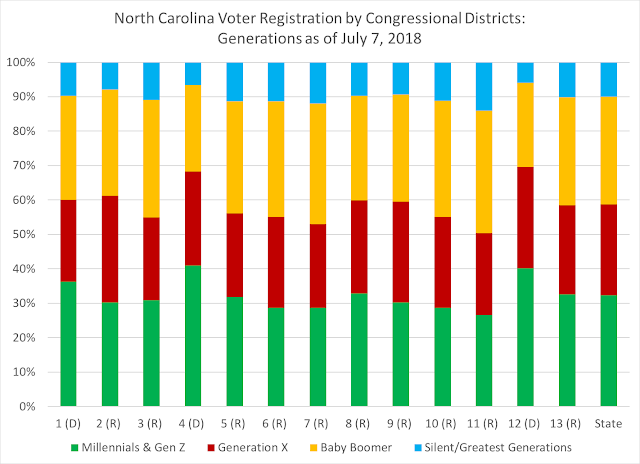 For the time being, the congressional districts with the most interest are the 9th and 13th Congressional Districts, both currently held by Republicans. In looking at the 9th, the Republican party registration number is at 31 percent, which is the lowest percentage for a Republican-held district in the state. A recently released Civitas Poll shows a significant gender gap between Democrat Dan McCready and Republican Mark Harris, and this gender difference is also evident in the district's voter registration numbers as well: 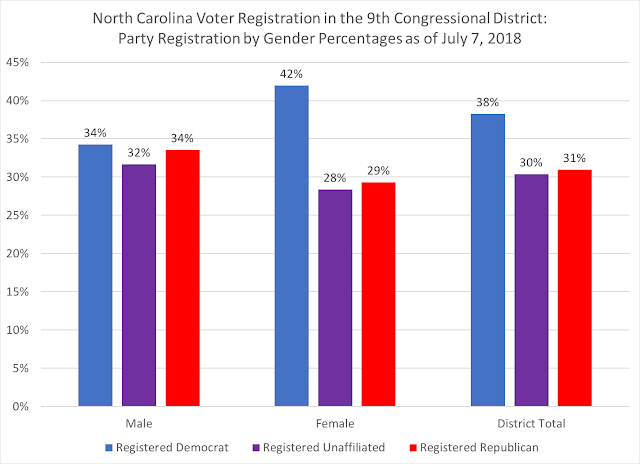 The 13th district has an overall GOP percentage of 34, which is the fourth highest percentage of all the districts, but the gender partisan difference is again like the 9th district: 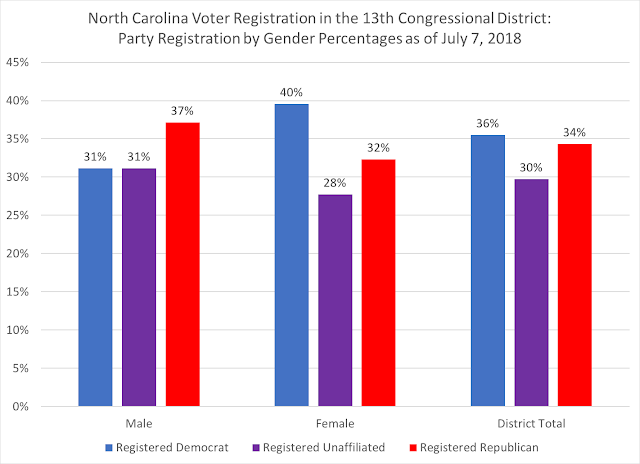 While men in the 13th are more Republican than in the 9th (37 percent to 34 percent, respectively), the Democratic plurality (40 percent) among women is slightly less than in the 9th (42 percent).

As noted in a previous post, North Carolina's mid-term elections tend to have a higher registered Republican turnout rate than in presidential election years, but with the potential for a Democratic wave, all bets may be off with this fall's campaign; therefore, watching the dynamic of registered voters and who actually shows up will be important to gauge how much North Carolina's congressional districts may be in play.
By OldNorthStatePolitics.com - July 12, 2018