Some thoughts on Tuesday's primary election in the Old North State:

The 9th Congressional District Republican contest lived up to the belief that it would be another competitive rematch between incumbent Robert Pittenger and Rev. Mark Harris. In 2016, when Pittenger secured the nomination with a 134 vote win over second-place Harris, there was a viable third candidate, Johnson, whose base was in, and he subsequently won, Union County. This year's contest did have a third candidate, but one who only generated 1,862 total votes, so the match was definitely between Pittenger and Harris.


In the end, 814 votes determined 2018's winner of the GOP contest, with Harris keeping Pittenger's percentage in Mecklenburg County (both Harris' and Pittenger's home county) close to his 2016 numbers: Pittenger won Mecklenburg with 48 percent of the vote in 2016, and carried Mecklenburg with only 51 percent. But the key difference was again Union County: while Pittenger improved substantially on his 27 percent in 2016 in the county to 43 percent in 2018, Harris went from 36 percent in 2016's three-way contest in Union to 55 percent this year. The following graphs compare 2016 to 2018 vote totals for Pittenger, Harris, the third GOP candidates, and then a direct comparison between Pittenger and Harris for 2016 and 2018 in the district's counties: 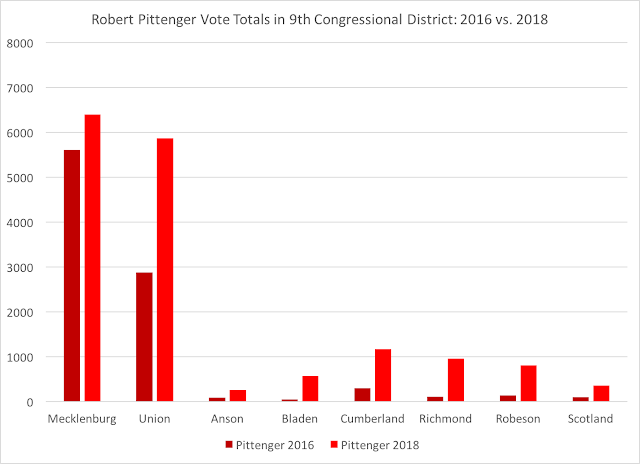 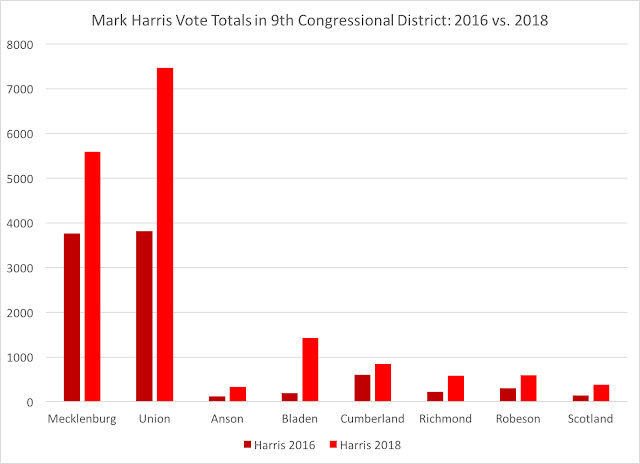 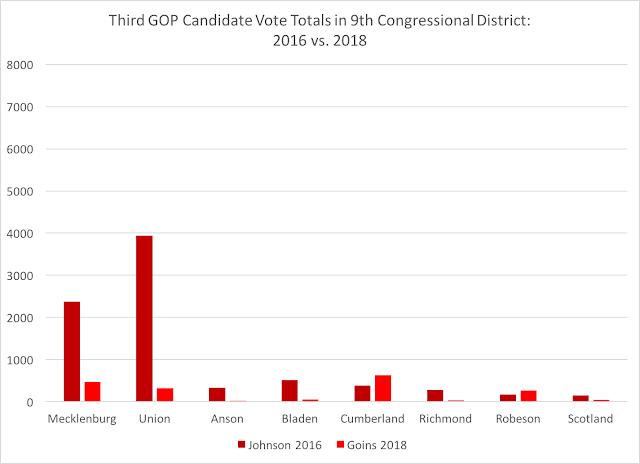 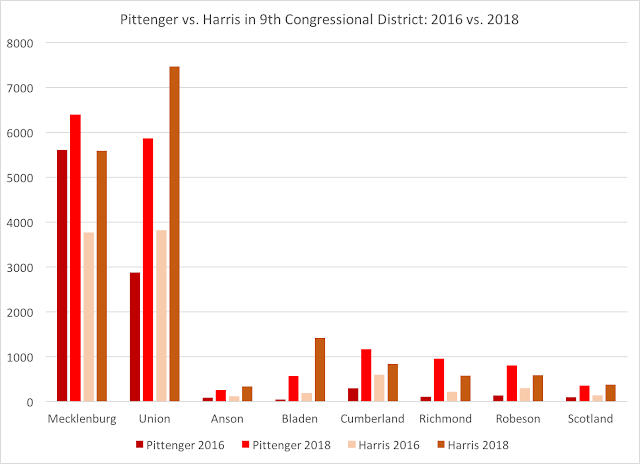 As I've talked with reporters following the fall-out of the first Republican incumbent to Congress being denied renomination in this election cycle, the typical reasons for incumbents not regaining their party's nomination is typically due to a significant scandal, loss of trust among the partisan base voters, or being in their first term and seeking their first nomination. The "first re-election" bid reason is typically the most vulnerable for first-term officials, and this was probably the case in point. It could also be due to the fact that the party's base, so closely aligned to the Trump "outsider to D.C." philosophy, may have played a role as well in this incumbent defeat.

The second observation, staying at the NC congressional level, is the strength of Democratic primary candidates who won, especially Dan McCready in the 9th Congressional District. While we don't have a clear platform to assess the Democratic "wave" that many are expecting, it is notably that in the 9th, both Republican Pittenger and Harris had a lower combined vote total than did McCready, and that more voters in the 9th took the Democratic ballot than the Republican ballot.

The other Democratic primary winner of the night was the 13th's Kathy Manning, who secured 70 percent of her primary vote to face Republican incumbent and first-term Ted Budd. The 9th and the 13th are looking to be the marquee congressional races in the Old North State come this fall, due to the sense of ideal Democratic candidates for the district and their proven fundraising prowess so far.

The third observation to Tuesday's primaries: the localized losses of state legislative incumbents. Two state Democratic incumbents and five state Republican incumbents to the NC General Assembly lost their renomination bids. The likelihood is that many of these defeats were very localized, but it is striking that incumbency was not as safe a bet as it has been in the past.

Finally, Tuesday's voter turnout--or more realistically, the lack thereof. In 2014's mid-term election, a state-wide voter turnout rate was 15.79 percent, with a highly competitive Republican U.S. Senate nomination battle between Thom Tillis and Mark Harris, among others. This primary saw a voter turnout of 14.25 percent, which was around the "15-ish" percent that I had thought we would see. Now, some would argue, hey, that's pretty good considering that there wasn't a state-wide race this primary and you almost matched 2014's number. Yes, but still: for many offices, this election was the final/general election because of the lack of an opposing candidate for the fall's general election. So, 85 percent of North Carolina's 6.9 million voters stayed home, went to work, and did something other than cast their voice and vote in determining who would represent them. In other words, the voice and vote of the 15 percent who did show up was a lot louder and more powerful.
By OldNorthStatePolitics.com - May 09, 2018