After Sunday's "Souls to the Polls," NC Absentee Ballots Stand at 1.75M

Following the traditional Sunday organization drive known as "Souls to the Polls," a little under 50,000 North Carolina's absentee ballots were added yesterday, putting the grand total of absentee ballots (both mail-in and in-person) at 1,750,510:

Compared to 2012's cumulative total of absentee ballots (both mail-in & in-person), 2016 is currently running ahead by 7.3 percent: 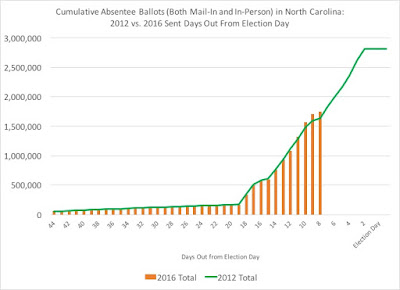 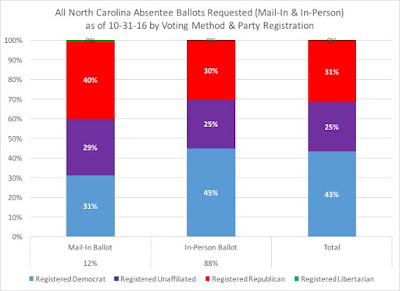 Compared to 2012's same day totals for each party registration, registered Democrats have made up some of their deficit; they are down 3.7 percent. Registered Republicans, however, are up 5.1 percent, and registered unaffiliated voters are up 37.3 percent in comparison to their same day totals from four years ago. 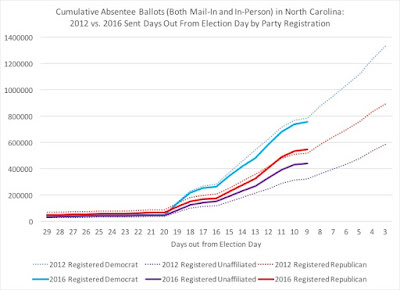 Following Sunday's voting, which is traditionally dominated by black voters in past general elections, the needle hasn't moved very much though in the break down by race within all absentee ballots: 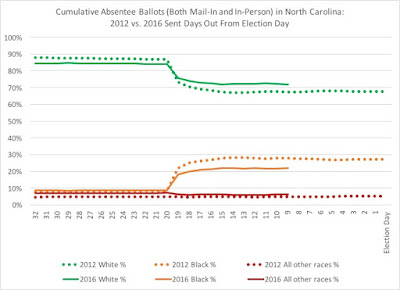 White voters are still 72 percent of the overall absentee ballots, with black voters at 22 and all other races at 6 percent. Yesterday did see a greater percentage of black voters casting ballots (28 percent) of the total daily, with white voters down at 67 percent.

Female voters are still leading in absentee voting, with 56 percent of the ballots requested so far. 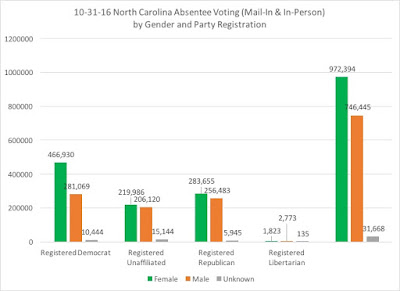 Finally, the return status of the different voting methods (in-person versus mail-in) indicates 1,647,312 ballots have been accepted among the two voting methods: 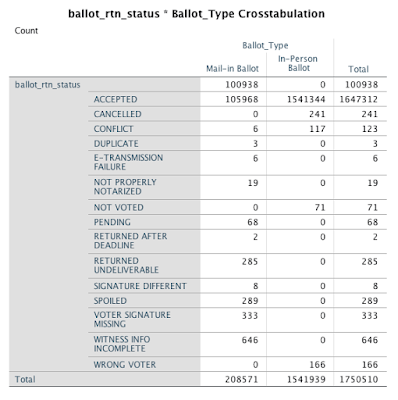 Among the accepted ballots by both delivery methods & party registration: 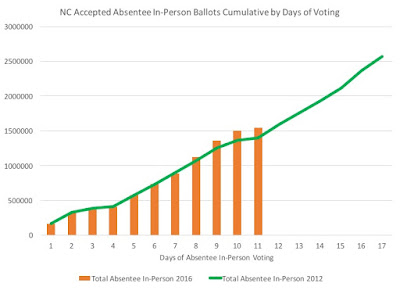 Among the party registration break down: 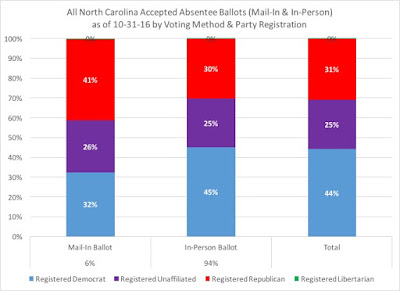 The return status by party registration is:

Among the in-person ballots accepted and compared against 2012's same day numbers: 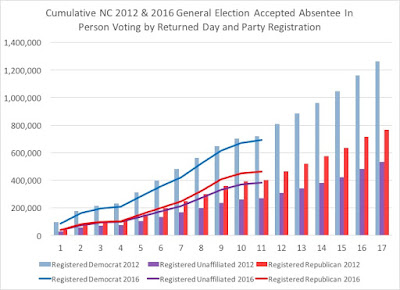 Overall, registered Democrats are 4 percent behind their same-day totals from 2012, registered Republicans are 15 percent ahead, and registered unaffiliated voters are 41 percent ahead of where they stood four years ago on the same day.

The daily percentages as we enter the final week of absentee in-person voting: 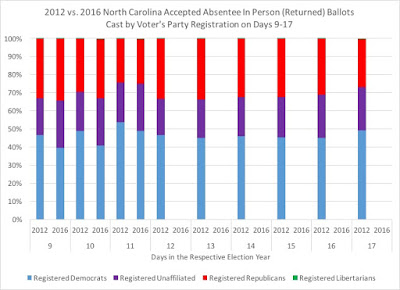 In terms of race among the party registration for in-person accepted absentee ballots: 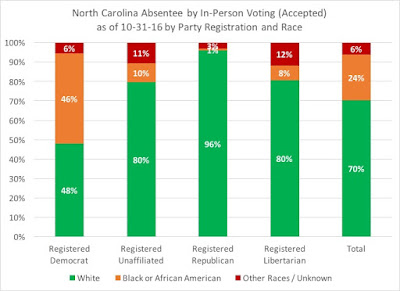 The key component of this is the notable drop from four years ago among black voters, who are strongly registered Democrats in the voter pool.

The daily percentages by race in absentee in-person ballots did show a spike up for the Sunday "Souls to the Polls" drive, but not matching the same percentage from four years ago: 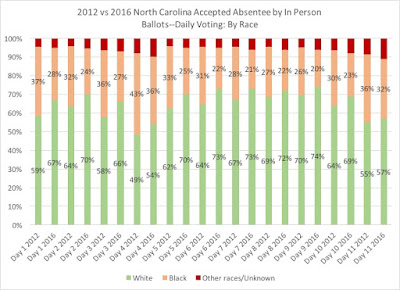 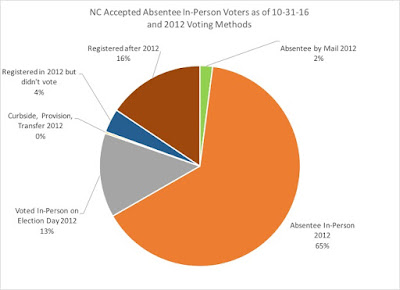 Finally, looking at the in-person accepted absentee ballots by region, generation, and native born versus born out of North Carolina, by party registration: 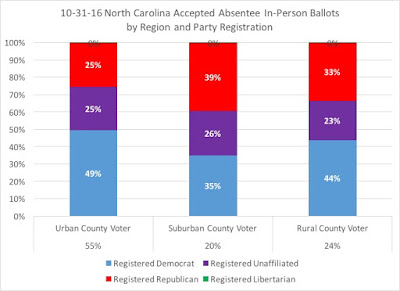 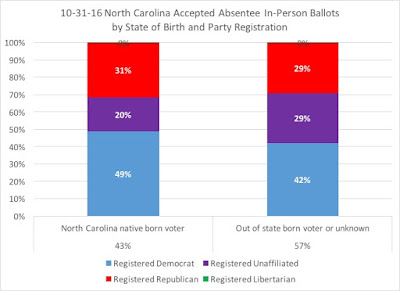 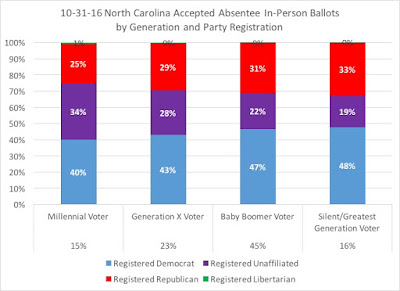 In terms of the 105,000 absentee mail-in ballots returned and accepted so far, only a little over 300 ballots were accepted yesterday, with very little movement in the percentages and trend lines in comparison to 2012's same day totals. 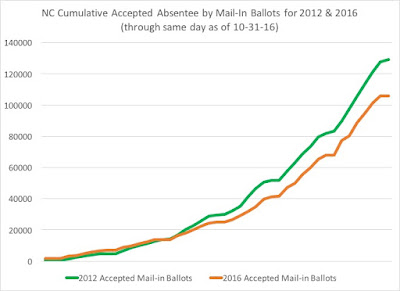 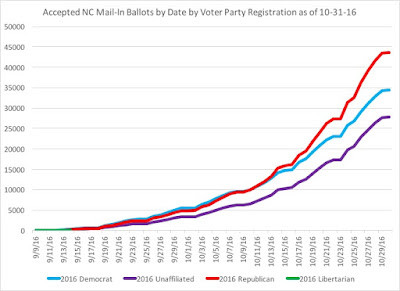 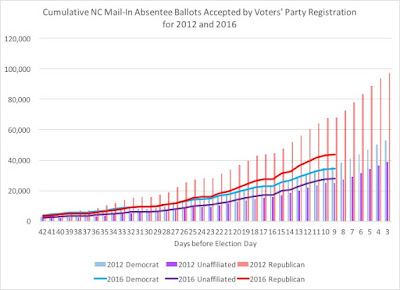 This year's mail-in ballots seem to be behind 2012's, and further investigation is needed to see if 2012 mail-in voters are voting in-person absentee. Overall, this year's mail-in ballots are only 82 percent of where things stood this time four years ago, with Republicans at 64 percent, Democrats 96 percent, and unaffiliated voters at 110 percent. 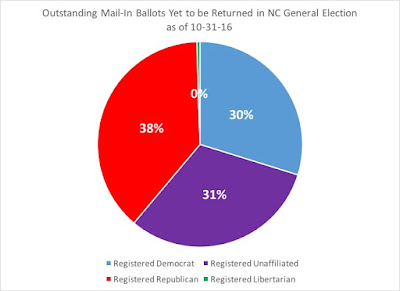