In a recent Pew Research report, Millennials (those born in 1981 up to the beginning of the new millennium) will overtake Baby Boomers (those born from 1945 to 1965, generally) as the nation’s largest living generation.  And, to quote a famous line drummed into history about the baby boomers, the torch is finally being passed to a new generation.

There is no doubt that the Millennials’ rise, as a techno-savvy, diverse, and highly educated generation, will impact the nation in a variety of ways, most notably through its politics. Some doubt the real impact of Millennials, however; Philip Bump, writing for the Washington Post’s Wonkblog, says that Millennials won’t matter very much in American politics until they get older.

But in North Carolina, at least, the impact of the Millennial generation is being felt in the pool of potential voters, but not in the composition of voters casting ballots—at least, not yet.

In the database of registered North Carolina voters from the NC State Board of Elections and matching up records of those who cast ballots with their basic demographic information, the most interesting trend since 2000 has been the growing percentage of Millennials in the registered voter pool. 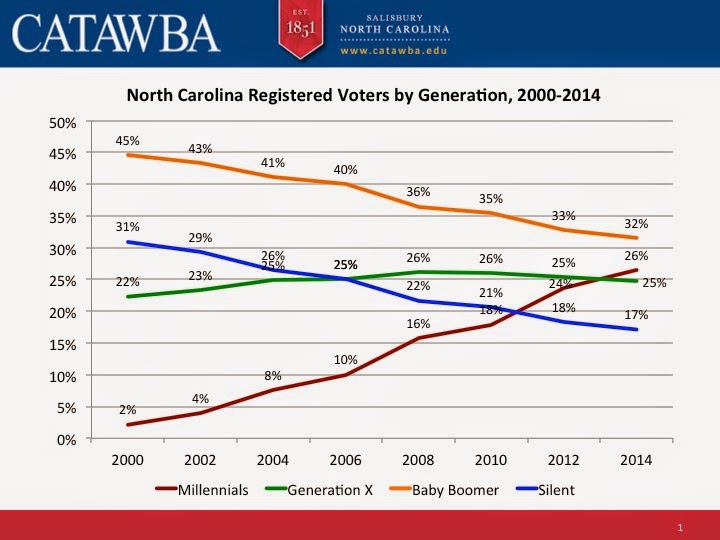 Since the beginning of the 21st Century, North Carolina voters in the Millennial generation have gone from 2 percent of the registered voter pool to 26 percent in 2014, while Baby Boomers have seen their proportion of the pool shrink from 45 percent down to 32 percent over the same time period.

The past trends suggest that between presidential elections in North Carolina, the percentage of the pool of registered Millennial voters increases 8 percent, with the percentage of the pool increasing 2 percent between presidential and mid-term election years. If these trends hold, then Millennial registered voters will go from 24 percent in 2012 to 32 percent in 2016, matching that year’s likely proportion of Baby Boomers in the state's eligible voter pool.

With nearly a third of the registered voters and many of them maturing into political participation, Millennials will begin to impact the state’s politics; and, in fact, they already are.

But as Bump noted, in the past two presidential and mid-term elections, Millennials have not shown up at comparable levels to their registration percentages. 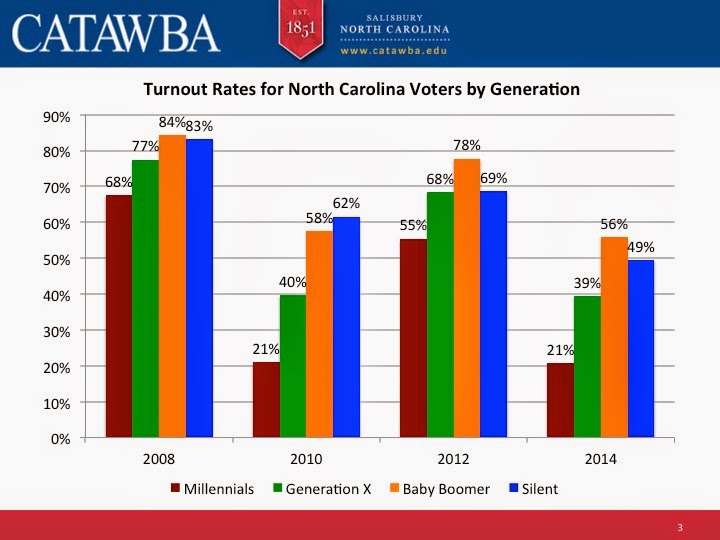 In both the 2008 and 2012 presidential elections, 68 percent and 55 percent of Millennials cast ballots; however, in comparison, all other generations had higher percentages showing up, with Baby Boomers at 84 percent and 78 percent in 2008 and 2012, respectively. 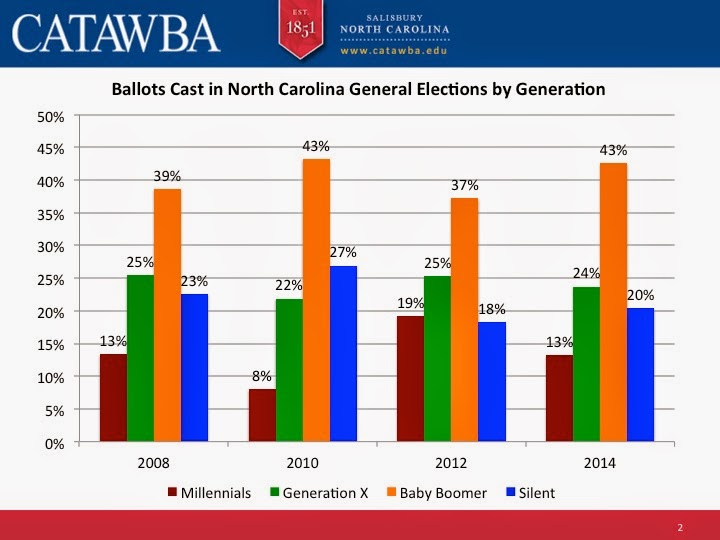 With the lower turnout rates, Millennials were only 13 and 19 percent in the 2008 and 2012 electorates, respectively, while Baby Boomers were 39 and 43 percent of the presidential elections.  This isn’t unheard of, since younger voters, no matter the generation, typically do not show up at the ballot box until they hold steady jobs, have families, and are more grounded in the economic and political system.

So while the Millennial generation’s overall numbers are signaling the critical shift in voter registration, that is the first sign of their growing level of importance. Whether one party, or both, recognizes the future wave of Millennials coming through the political system and respond will be the key test to see how much their generation begins to shape not just North Carolina, but the nation as a whole.
By OldNorthStatePolitics.com - January 25, 2015