How Polarized Are We? A Look At Some Numbers

This is a reprint from WFAE's The Party Line blog:

As the game of gridlock "chicken" in Washington continues to march on, commentators are trying to explain 'how did we get to this point of polarization?"

Recently, long-time DC observer Dan Balz of the Washington Post offered his explanation of the roots of the government shutdown as being “deeply embedded divisions in America’s politics.”

Among the factors, Balz contends, underlying the division is the fact that the congressional parties have separated themselves and increased the level of polarization, especially in the U.S. House of Representatives.

As one of the leading scholars tracking this trend described it, the post-Civil War period of Reconstruction was “a highly polarized time,” but today’s levels “are far worse than we observed then.”  In fact, some of the measures are close to going off the charts.

Another factor that Balz cites is that the parties have become much more homogenous, especially due to the realignment of the South from the Democratic Party to the Republican Party and the demise of the Northeast and Midwest liberal wing of the Republican Party.

This realignment has sparked questions about how deep it went in terms of actual voters.  Some scholars contend that it is only the elites of society that are polarized; one of the leading proponents of this view, Morris Fiorina, argues that the sensationalism created by the media over red states versus blue states is exaggerated.

One way to measure this possible polarization in the public is to look at how the public classifies themselves by both political party and ideology.

One great wealth of data is from the American National Election Studies, which has surveyed citizens since the mid-20th Century and allows scholars and researchers to explore a host of different questions on the nation’s political environment.

One basic way of looking at the political landscape is to classify the survey’s respondents by their self-identified partisan affiliation, going from “strong Democrats” to “pure independent” to “strong Republicans.”  In addition, the surveys asked respondents to classify themselves into different categories based on their ideology, from “extremely liberal” to “moderate, middle of the road” to “extremely conservative.”

Going back 40 years to 1972, we find a general mix among partisans when it comes to their ideology, or “their vision of how they see the world.” 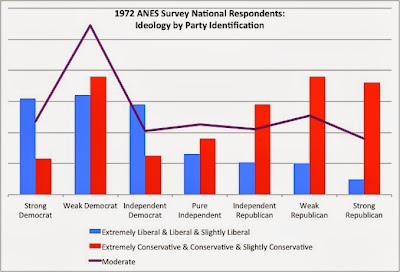 While one can see a concentration of liberals (extremely to slightly liberal) across the range of politicial party affiliation, conservatives were present in the Democratic affiliations.  Moderates appear to classify themselves more heavily within the Democratic ranks, but were distributed even along the independents to strong Republicans.

Flash forward to 2012, and a different picture emerges of the country.  Now, the ideological partisans have “sorted” themselves between the two parties, with the range of liberals camping out within the Democratic Party, while conservatives have fully migrated into the GOP. 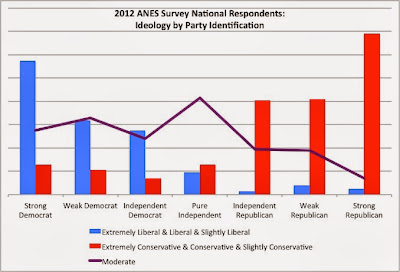 Interestingly, modern-day moderates have adjusted themselves more into the middle as “pure independents,” with an alignment to the Democratic party over the GOP.

In fact, when you look at just “pure independents” who don’t see themselves aligned to either of the two major parties, you find a pretty stable distribution in 1972 across the ideological spectrum. 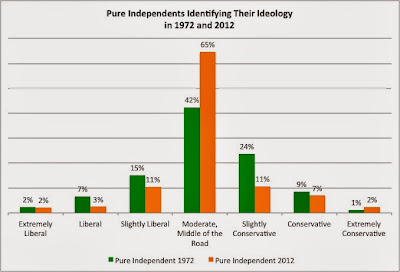 In today’s environment, there’s an even larger alignment to the “moderate, middle of the road” among pure independents.

Unfortunately, in 2012, only 14% of the respondents said they were a pure independent.  With 86% of public aligning themselves with one of the two major parties, and voting at least 85% of the time for their party’s candidate, is it any wonder that it’s not just the political elites in government, but the rest of us who can’t seem to understand the other political side?
By OldNorthStatePolitics.com - October 10, 2013