The Need for Independent Redistricting in North Carolina

A bi-partisan bill has been introduced into the N.C. House of Representatives to hand over the redistricting process in the state to an independent commission, and thus give up one of the most important powers that any majority party has: pre-determining which party will win each district through political gerrymandering.

The legislation would charge the Legislative Services Office with drawing congressional and legislative districts without the use of “political affiliations of registered voters, previous election returns, [or] demographic information, other than population head counts.”

In addition, the bill states that no district “shall be drawn for the purpose of favoring a political party, incumbent legislator, or member of Congress, or other person or group, or for the purpose of augmenting or diluting the voting strength of a language or racial minority group,” along with barring the use “of any of the addresses or geographic locations of incumbents.”

In the game of politics, this would be a radical departure for the next round of redistricting in the state in 2021—but one that would probably earn the legislators some form of public admiration, because the parties would be giving up their power over the voters.

In looking at the consequences of the most recent redistricting done by Republicans in 2011, we can see what the “victors” do with their spoils in winning control of the redrawing process.

In the 2012 election under the new legislative maps, Republicans created safe districts for both themselves and for Democrats—but created disportionately more districts for the GOP than the opposition.

In the state senate, six contests out of fifty could be considered “competitive” (meaning that the winner received less than 55% of the vote).  In fact, three times as many seats (18) had no opposition contesting the election.

If all of the state senate votes for Democratic and Republican candidates were added up respectively across the state, Democratics garnered 47% to Republican’s 53%.  But Republicans ended up with 66% of the seats to Democrats’ 34%, creating a disproportionate advantage for the Republican party.

In the state house, a similar pattern emerged: Republican candidates garnered 51% of the total state-wide vote, but won 64% of the seats in the chamber.

In fact, nearly half of the 120 seats in the house went uncontested (27 automatically went to Republicans, while 28 went to Democrats).  A little over ten percent (14 seats) could be considered “competitive” in terms of the winner securing less than 55% of the vote.

So it appears that political gerrymandering seems to exist in the North Carolina General Assembly districts.

Another way to look at this gerrymandering is to explore the relationship between presidential voting in the district and the voting for the district’s legislative candidates. If the district was “competitive,” then there could be districts that, for example, voted for Obama while, at the same time, voted for a Republican for the state house.

In only ten percent of the 120 state house seats did the presidential candidate of one party win in the same district as the opposition party’s legislative candidate.  For example, in District 92, Obama carried the district with 54% of the vote while the Republican state house candidate won with 51% of the vote.

With so few districts having ‘split-ticket voting’ patterns, it is notable that the Romney vote in a district has a strong correlation to the vote cast for the Republican House candidate. 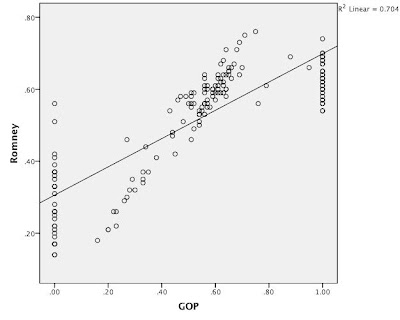 In the upper chamber, only two districts out of 50 saw the two parties split the contests at the presidential and state senate.

One could attribute the strong correlation in both chambers between the presidential and state legislative races to the drawing of district lines that favor one party over another from the top of the ballot down.

But if the districts were drawn without regards to party affiliation, past election results, and ignorance of an incumbent’s address, the legislative races in North Carolina might reflect a long-held belief of American democracy: that the voters should pick the candidates, rather than the candidates picking the voters.