This piece appears at WFAE's The Party Line under the title "Kabuki Dance Underway Amid Fiscal Cliff" and is reprinted here.

The Fiscal Cliff. Fiscal Armageddon. The Thelma and Louise Fiscal Calamity. It may go by many names, but since the election is over and the status quo has been returned to Washington, the nation’s great debate turns to the fiscal and budgetary matters that are ticking down faster than the Mayan predictions of the end of the world.

In short, we hear of this great economic catastrophe the country faces, more probably accurately named the Fiscal Perfect Storm.

The first whammy: the tax rate reductions put into effect in the first two years of the George W. Bush administration are set to expire, with rates returning to what they were in the Clinton administration.

The second whammy: “sequestration” due to the lack of Congressional will to come up with their own spending reduction plan.  Since Congress couldn’t trust itself to come up with spending cuts on their own, they took the political courage to impose automatic cuts across the board through the Budget Control Act of 2012.

These cuts affect both defense and domestic discretionary spending and are across the board.  The federal budget is made up of two basic components: mandatory spending (on things that are out of year-to-year control of Congress, such as Social Security, Medicare, Medicaid, and other spending that is set by law that must be spent), and discretionary spending, which includes defense spending and all domestic spending that we typically associate with the federal government.

And so, with the elections in the rear-view mirror now, the country is getting once again close to its credit card limit.

With these three whammies—tax rates returning to pre-2001 & 2003 levels, spending cuts across the board, and the nation’s credit card being maxed out—it’s more than just a cliff we seem to be heading towards, but rather a perfect economic storm.

Demonocracy.info presents a “visualization” of many issues, especially economic perspectives, and has a great resource on the implications of what we are facing at the end of the year.

So, how do we get past this storm? The election really didn’t send a clear signal other than both Democrats and Republicans were returned to office—and the sense from the electorate was, “work together.”

But can both sides really work together when they have such fundamentally different views?

One of the key reasons that we are in the midst of the kabuki theater antics of both political sides is because there is no political “middle.”

Two political scientists, lead by Dr. Keith Poole at The University of Georgia, has developed a measure to compare individual members of Congress (MoCs) to their colleagues when it comes to voting on economic issues.

Using an assumption that a “moderate middle” is between -0.25 and 0.25, we can map out where most members fall on this spectrum for both parties. 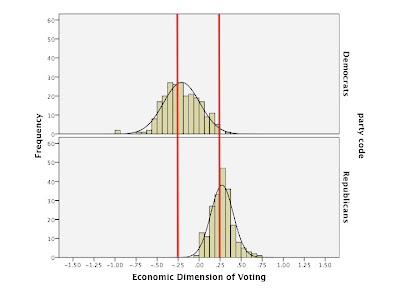 The 84th House of Representatives (1955-56): Frequency of
Democrats and Republicans based on Economic Dimension of Voting

In addition, both parties had significant numbers of members in the “middle” range (-0.25 to 0.25), meaning that these moderate members between the two red lines shared similar ideas on economic issues when it came to casting their votes on bills.

Fast forward to the 111th House of Representatives (we’re currently in the 112th, but the preliminary measures aren’t that far off from what we see currently) and there is a very different set of parties. 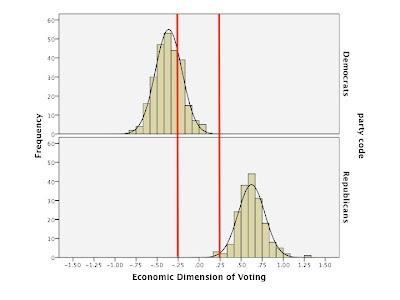 The 111th House of Representatives (2009-2010): Frequency of
Democrats and Republicans based on Economic Dimension of Voting

In our modern House of Representatives, the moderates are non-existent and the parties have moved increasingly to their polarized ends of the spectrum.

The U.S. Senate, the body once described as the “saucer” to cool the passion of the “cup” that is the House by our nation’s first president,” has experienced a similar movement from the political parties of the 1950s to today.

So where is the group who will make the compromise between the two parties, especially in the House?

And by all indications, the majority of the GOP majority are not budging.

Some would argue that with what the country is facing long term, the jump off the cliff may not necessarily be the worst thing. But what the private markets (i.e., Wall Street) hate is uncertainity, and what politicians and the general public hate is a Wall Street roller-coaster ride; we may see a short-term solution after both sides are done with their kabuki dance.

But dark clouds are still gathering when there isn’t some longer-term solution to our fiscal storm.