Continuing our weekly update of absentee by mail ballots coming into North Carolina for the November 8th General Election, here is the October 5, 2022 data for both requests and returned & accepted ABM ballots.

Of the 99 (out of 100) counties reporting requests for an absentee by mail ballot, 134,148 North Carolina voters have submitted an ABM ballot. The party registration continues a distinct Democratic advantage, followed by a slightly growing percentage from Unaffiliated registered voters, with registered Republicans at 14 percent. 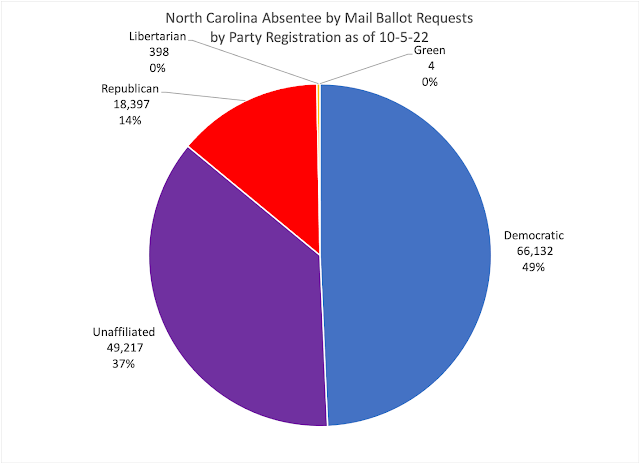 One key demographic analysis is the gender percentage of these requests: so far, female voters account for 55 percent of the requests, with registered Democratic women a significant bulk. 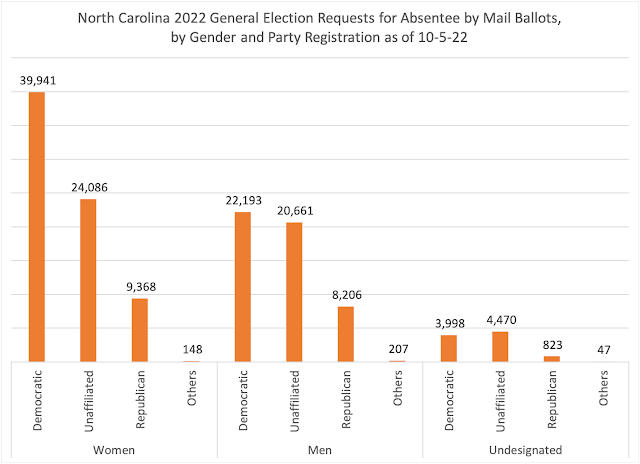 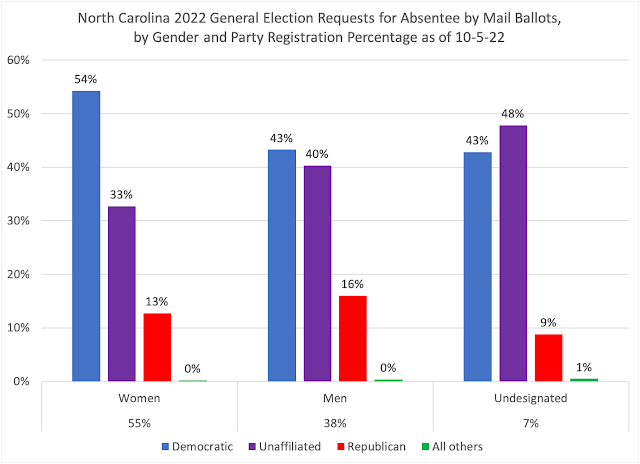 Men are seeing about an even split between registered Democratic and Unaffiliated status, with slightly more registered Republican men requesting ballots than the state-wide percentage.

Among the returned and accepted (cured) ballots that have been processed by 95 counties so far, 16,736 ballots are submitted and 'banked' for the November 8th election, representing 12.5 percent of the requested ballots so far.

Compared to 2018's same-day totals, 2022 is roughly 6.5 times ahead of what we saw in the last mid-term election; by comparison (unfairly, of course, due to COVID and a presidential year), 2022's numbers are 6 percent of what North Carolina had already banked in ABMs at this same point before the general election. 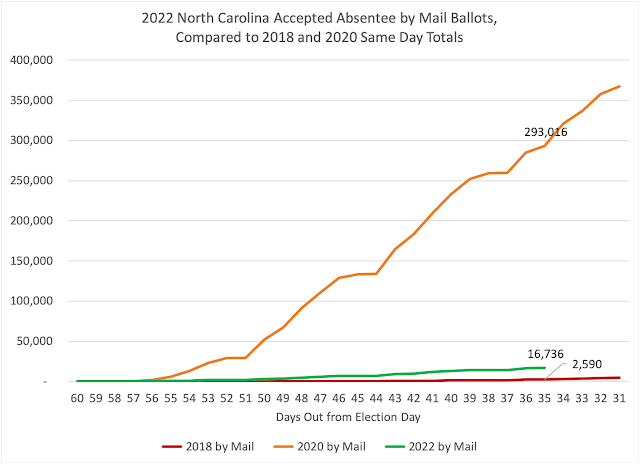 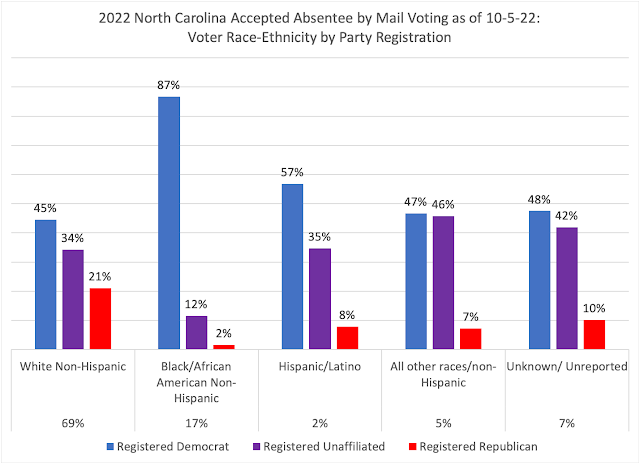 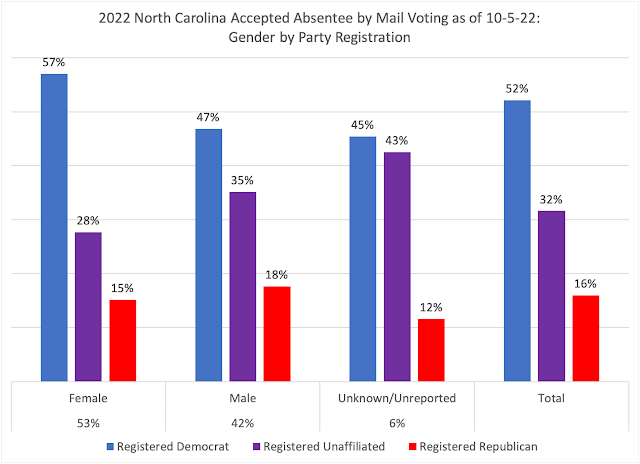 Not surprisingly, the mean age for a returned NC absentee by mail ballot is 62 years old, as demonstrated by the frequency histogram of voter age. 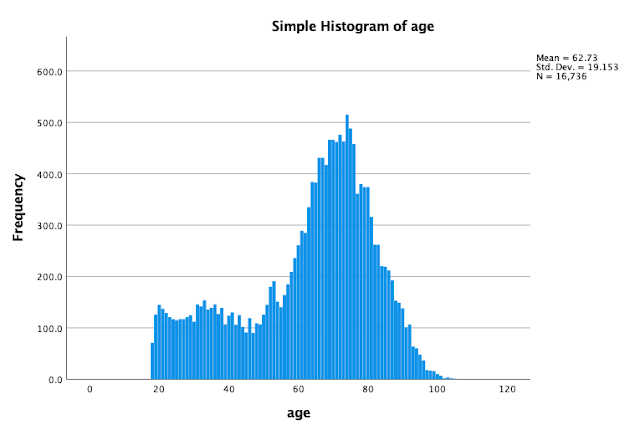 Breaking the returned and accepted ballots into generational cohorts, Boomers are a significant plurality of the ballots, with another quarter coming from the oldest generations. 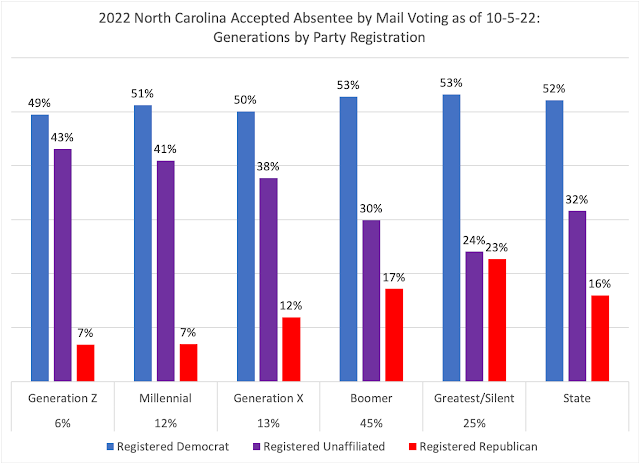 This vote method (absentee by mail) is traditionally the method used by the oldest voters, so when in-person voting begins (for early, on October 20, and then on Election Day), the age 'skew' should shift considerably.

In speaking of other vote methods, the following chart shows what vote methods of 2022's early by mail voters used back in both 2018 and 2020. 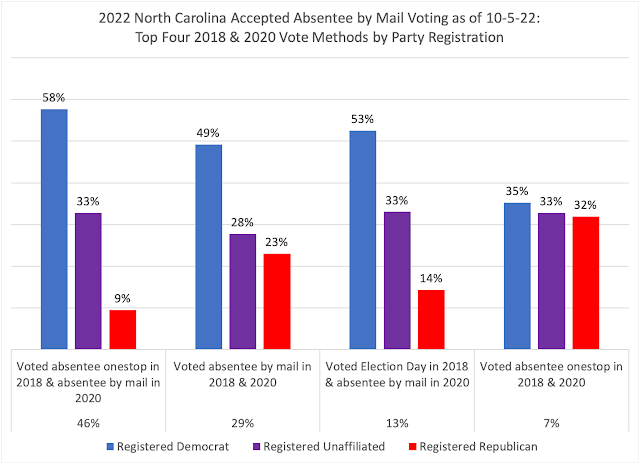 Nearly 60 percent of this year's mail-in voters voted in-person in 2018, but then switched to voting by mail, with another 30 percent having consistently voted by mail in 2018, 2020, and now in 2022. If this trend of adopting a vote method in the previous election year continues, we may see a significant shift in the composition of mail-in voting from past historic trends (pre-2020, it was registered Republicans who dominated NC's mail-in voting method).

As my colleague Chris Cooper noted in last week's post in his analysis:

we do not see any substantive and unanticipated changes in mail voting in North Carolina. In terms of turnout, 2022 falls somewhere in between 2020 and 2018, albeit closer to 2018.

This week's trends continue that same conclusion, though I would remind folks a key fact: these 16K+ voters (and more in the coming weeks) have 'banked' their ballots, so they are done with the 2022 general election, five week prior to Election Day.

Overall, the rise of ballots compared to 2018's numbers are impressive so far. But, as is always the case in North Carolina, stay tuned.