After 35 days of early voting in 2022, the song remains (mostly) the same as it was during the last three weeks of updates. The volume of requested and returned mail ballots remains above 2018 and below 2020, Democrats continue to dominate mail voting, and the demographics are shifting slightly from recent years.

Want details? Of course you do.

The Volume of Accepted Ballots.

This is what most observers expected. 2020 was an anomaly and we will likely never see mail voting numbers that high. At the same time, many people likely tried mail voting for the first time in 2020 and liked it, hence the higher mail voting compared to 2018.

If we continue to track along similar numbers (~4x 2018), then we will see about 390,000 mail ballots accepted in North Carolina for this election. Some back of the envelope math: if we get 60% overall voter turnout (a high end estimate) & 390,000 mail ballots, that would mean that ~9% of all ballots would be cast by mail in 2022. While I think those are reasonable guesses, they are just guesses and are worth about what you are paying to access this blog. 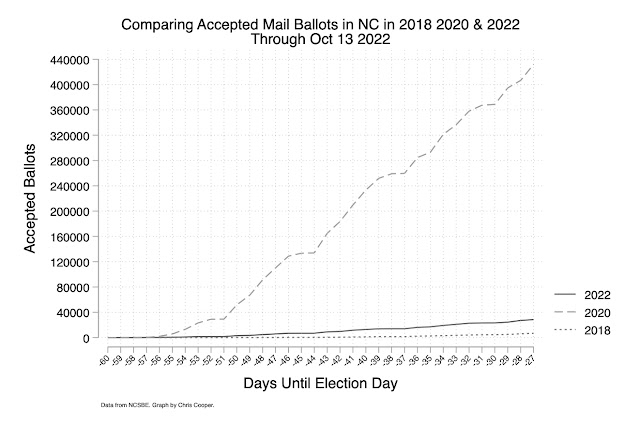 No Evidence (Thus Far) of a "Dobbs Effect" in Mail Voting

After the Dobbs decision, many speculated that we might see an increase in female voter turnout. Thus far, we have not.

As you can see below in the figure below, self-identified females make up about the same percentage of mail voters as they did in 2020. And female mail voting turnout may even be down a few percentage points from 2016 and 2018.

There are a number of possible explains for this. Perhaps there will be a "delayed wave" of female voters who will cast votes in higher than normal proportions in the coming weeks. Perhaps the "Dobbs effect" won't be evident in North Carolina, but will be more apparent in states where abortion legislation passed in the wake of Dobbs. It's also possible that the Dobbs ruling occurred far enough in advance of election day that its electoral effects will be muted. Finally, because the primary predictor of opinion on abortion is party identification, not gender, perhaps the effects of Dobbs won't be evident in analysis of female voting patterns, but will be evident elsewhere. 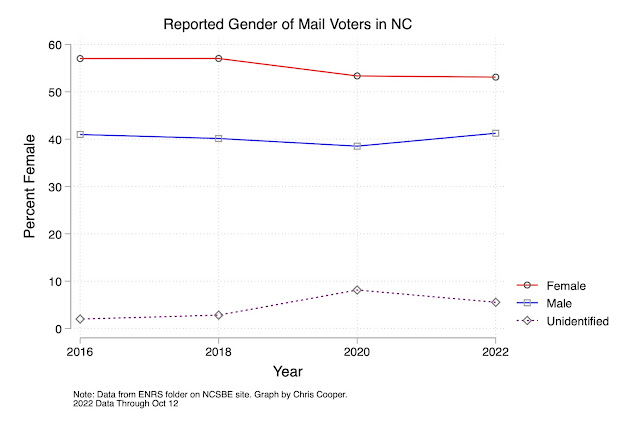 Similar to last week and the week before, Democrats are making up a much larger proportion of the mail voting electorate than Republicans. My assumption is that this is not a sign of a blue wave coming, but rather a continuation of the increasing partisan polarization of mail voting.

For context, take a look at the graph below. In 2016 Republicans made up the plurality of mail voters in North Carolina. That started to change in 2018 (pre-pandemic) and then accellerated in 2020. The trend line is continuing thus far in 2022. 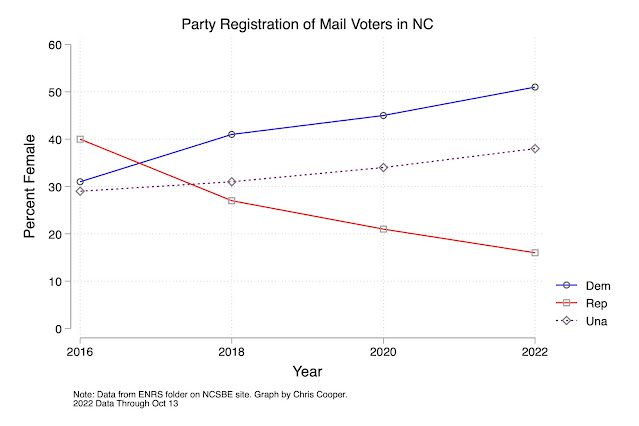 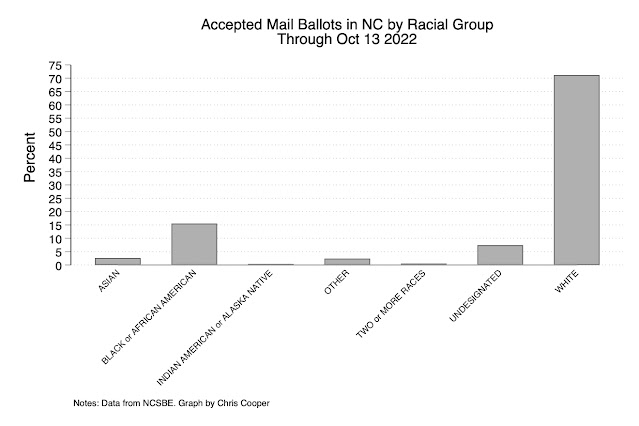 Thus far, the mail voting electorate in NC is slightly older than we have seen in recent years. The average age thus far is 63, compared to 52 in 2020, 55 in 2018 and 55 in 2016. I'll be watching these numbers in coming weeks to see if this is an anomaly of the early mail voting period, or if is signifies a change.

And, just because I can, here are the patterns in terms of congressional district. 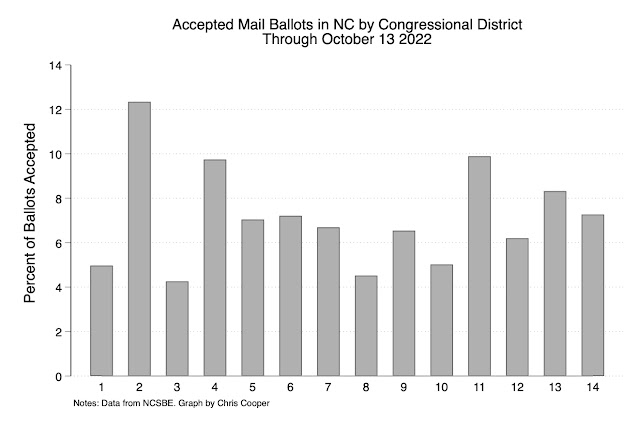 All of the caveats apply here. It's early (even for mail voting), and we don't know if the patterns we are seeing are reflective of mail voting, or of the electorate as a whole. Luckily, we will begin to know more as in-person early voting starts late next week.

Michael Bitzer will be back in this space next week to review what we know about mail voting on the eve of in person voting commencing, and I'll be back the following week with with an update that will include both mail and in-person early.

Chris Cooper is Madison Distinguished Professor of Political Science and Public Affairs at Western Carolina University. He tweets at @chriscooperwcu.