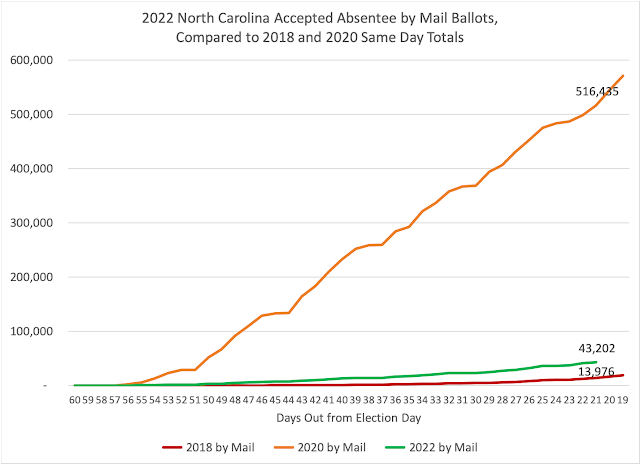 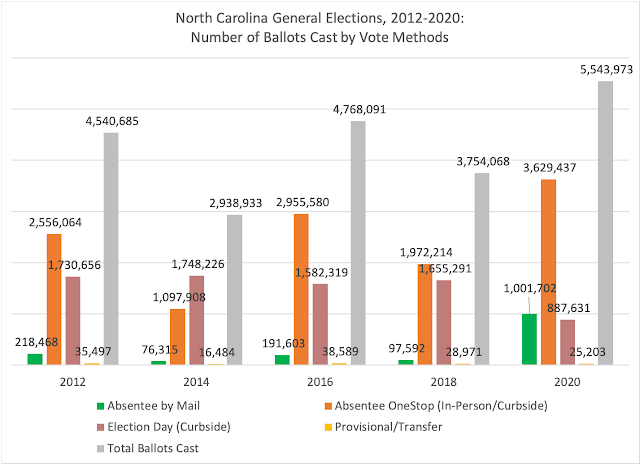 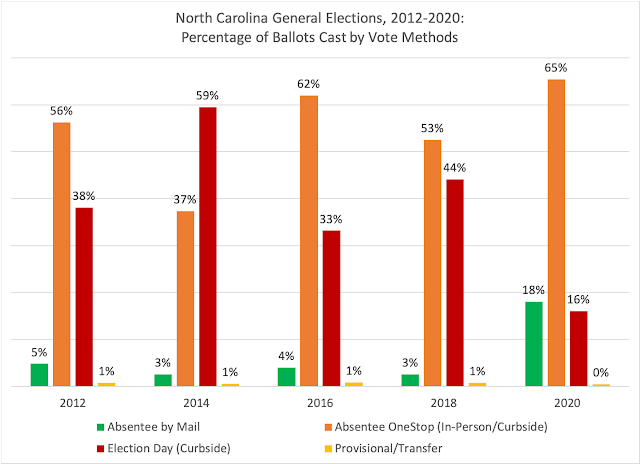 Data for both charts from the NC State Board of Election's "Voter History" File compiled by Michael Bitzer
As you can tell from the first chart, since the 2012 election North Carolina continues to see increased voter participation, through ballots being cast, in the two main general elections: presidential and mid-terms. In presidential years, over 4.5 million ballots were cast in 2012, rising to 4.7 million in 2016, and then hitting a new record of 5.5 million in 2020. The past two mid-terms have also seen election-to-election increases in ballots cast, going from 2.9 million in 2014 (with a competitive U.S. Senate election at the top of the ballot) to 3.7 million in 2018 (the blue-moon election where there was no U.S. Senate election to garner the voter's interest).

As Chris noted in his post last week, the state's turnout rates have steadily risen as well, and the likelihood (and that I agree with him) is that we could see in the neighborhood of 60 percent of North Carolina's 7.4 million registered voters cast a ballot this year--a level that would rival the 1990 mid-term year that saw Republican Jesse Helms and Democrat Harvey Gantt fight it out at the polls.

What might account for this increase over time? From a political scientist point of view: partisan polarization. The deep divisions in this state is giving us a benefit, at least, in terms of turnout. To have the 2020 general election see 3 out of 4 registered voters participate below all estimates out of the water, I think, and this year's divisions are mirroring the environment from just two years ago. Anything above 60 percent would be another astounding feat, but again, something we'll have to see how in-person early voting goes and the ultimate numbers come the close of the polls at 7:30 PM on November 8.

This Week in Mail-In Balloting

Now, to return to the matter at hand: this week's absentee by mail ballots: as I alluded to in the introduction, another week, another increase, but the same general tune.

Among the requested and subsequently returned and processed mail-in ballots, registered Democrats continue to lead in both categories. Among requested ballots processed from the 99 counties, Democrats are 47 percent, down from their majority status early on, but still a commanding lead over the number two group, registered Unaffiliated voters, having inched up to 37 percent. 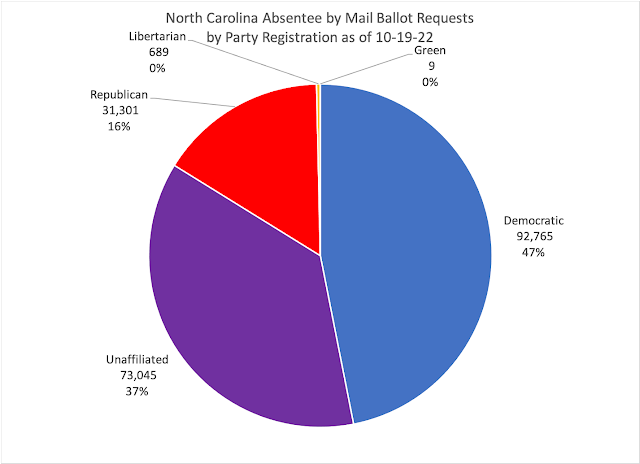 Now, the obligatory "note of caution": what this means for November 8th's final results is anybody's guess. If we only looked at the 2020 mail-in votes, Joe Biden would have won North Carolina 70-30. That didn't happen, so there's no point in trying to decipher the tea leaves other than, Democrats and Unaffiliateds are 'banking their ballots' with three weeks left in the run-up to November.

In terms of a 'return rate' (those ballots requested versus those returned and accepted and reported), both partisan registrations have the highest percentage: 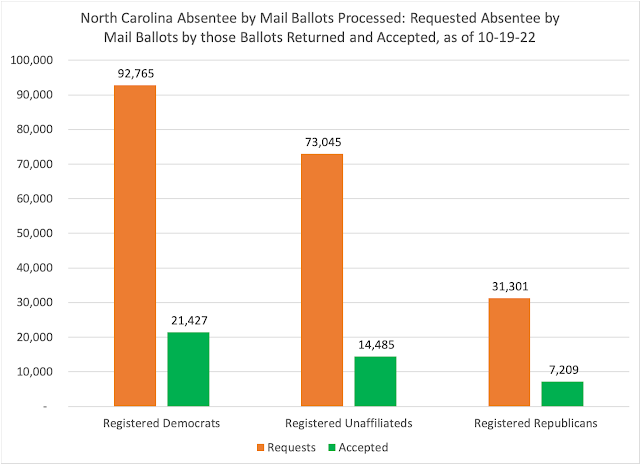 Registered Democrats and Republicans have a 23 percent return rate, while Unaffiliated voters are at 20 percent, for an overall state-wide percentage of 22 percent.

In breaking down the requests by gender and party registration, women continue to be the substantial majority of requests for absentee by mail ballots, with registered Democrats and Unaffiliated female voters dominating. 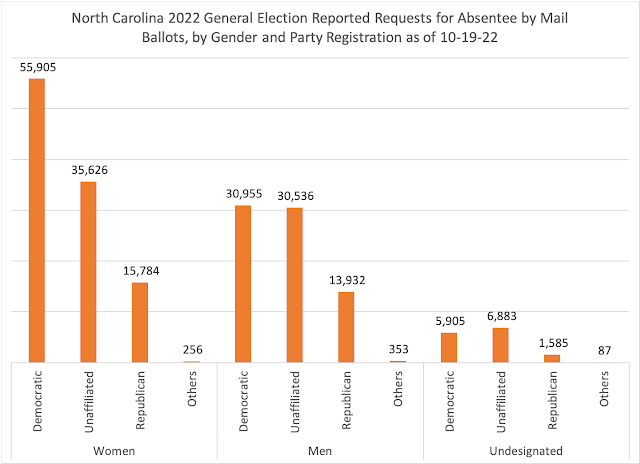 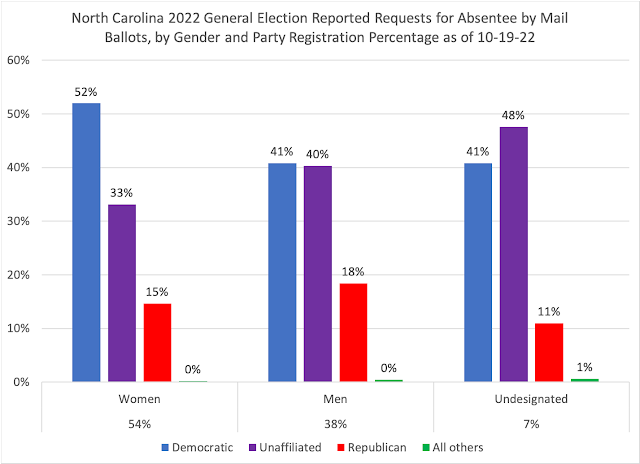 Men are almost evenly divided between registered Democrats and Unaffiliateds, with Republican men being slightly higher than the state-wide average in requested absentee by mail ballots.

Among the returned, accepted, and reported mail-in ballots, women are also the lead category. 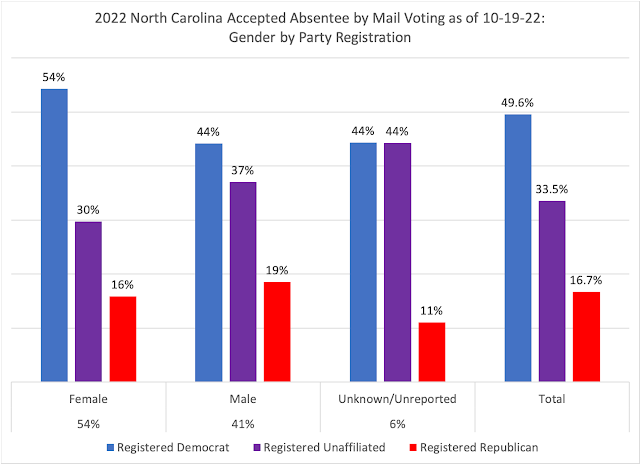 Among race-ethnic groups, White non-Hispanic/Latino voters are over-performing their voter registration percentage (71 percent to 64 percent), while Black/African American non-Hispanic voters are underperforming (17 percent to 20 percent of the voter pool). 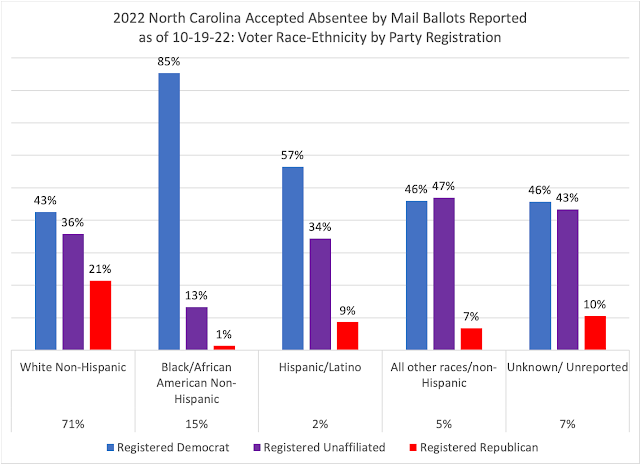 Among generations and voter age, the mean age of a North Carolina absentee by mail voter is nearly 63 years old, with older voters showing a greater frequency of participating so far, as demonstrated by this frequency histogram of voter age: 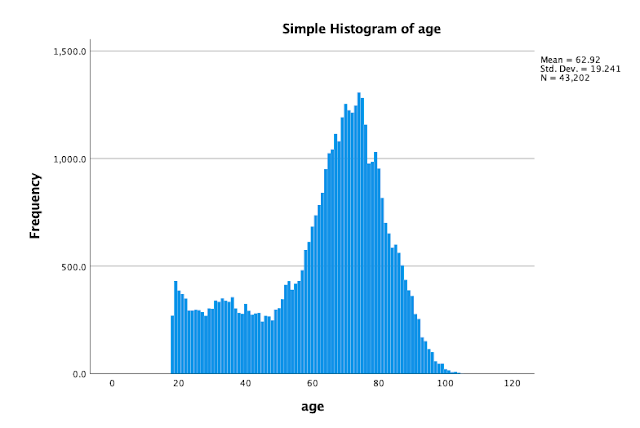 This is common for mail-in ballots to skew older, as also reflected in the generation cohort breakdowns, and by party in this next chart: 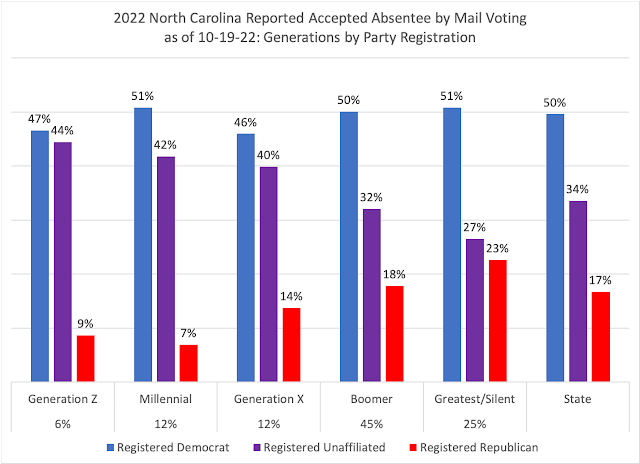 Among NC's voter pool, voters under the age of 41 years old (Millennials and Generation Z) account for a plurality of registered voters, but older voters (Boomers and Greatest/Silent) are currently 70 percent of the early mail-in ballots submitted, accepted, and reported so far.

Among the congressional districts, the Second Congressional District (most of Wake County) has nearly 12 percent of the total returned/accepted/reported absentee by mail ballots, with the mountain's Eleventh District in second place at nearly 10 percent.

Finally, looking at the past vote methods used by 2022's early mail-in voters so far, we continue to see a distinct trend from the 2018 and 2020 elections.

So far, 64 percent of this year's mail-in voters participated in both the 2018 and 2020 general elections, and the vast majority of them voted using mail-in ballots in 2020. 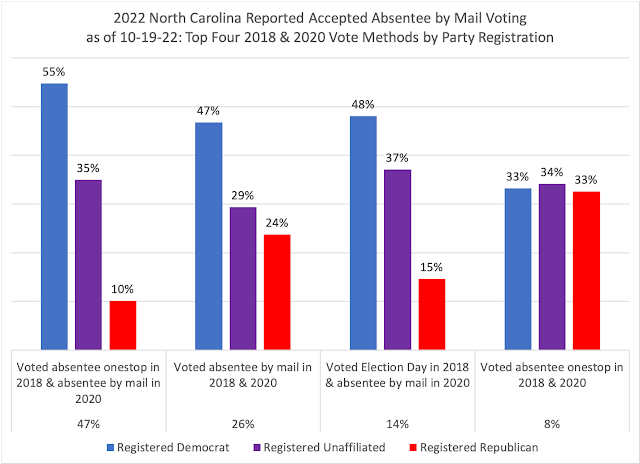 To conclude, and return to the early note made in this post, absentee onestop voting (early in-person) starts tomorrow, and will likely dwarf the absentee by mail numbers in the reporting data files from here until November 6. The key question to ask is, while absentee by mail ballots return to their historic 3-4 percent of the total ballots cast, or could they be a slightly higher percentage than in past elections?

Nobody expects this year to rival 2020's 18 percent (1 million) mail-in ballots, but one interesting dynamic (for those of us who study voting trends) will be, how many 2020 mail-in voters continue to use that method, or do they revert back to voting in-person, either early or on Election Day?

More questions to answer in future blog posts, when the data allows.