North Carolina's "None" Voters: The Growing Non-Reporting of Race, Ethnicity, and Gender

The Increasing Relevance of a Footnote

Both of us spend a lot of time with the North Carolina voter registration and voter history files. When we present data, evidence, and analyses from these files, we usually provide a small footnote that indicates something like “*we exclude a small number of voters for which demographic data are not available” or acknowledge that a portion of voters don’t report their classification. Over the past few months, however, we both have begun to question how small of a number these "no label" voters really represents. In the course of investigating it, we have discovered that, while still relatively small, the number of folks who do not answer the demographic questions when they register to vote is increasing. As we discuss below, this presents some problems that many of us must grapple with when doing similar analyses in the future.

How We Got Here.

Prior to 1993's National Voter Registration Act (NRVA), gender, race, and other demographic questions were required when people registered to vote. After the NVRA, however, many of these questions went from required to optional. On the current version of North Carolina's voter registration form, this section looks like this:

Due to the COVID-19 pandemic, North Carolina has implemented an online form through the state's Division of Motor Vehicles (DMV) that does not ask about race, ethnicity, or gender at all, although it is possible that the DMV adds these demographic questions from their own database.

How Much of a Problem Is this, Really?

As the figure below suggests, these three critical demographic questions are more likely to be missing from younger registrants. In fact, the two youngest generations--those currently under the age of 40--are particularly likely to not report their racial, ethnic, or even gender classifications. 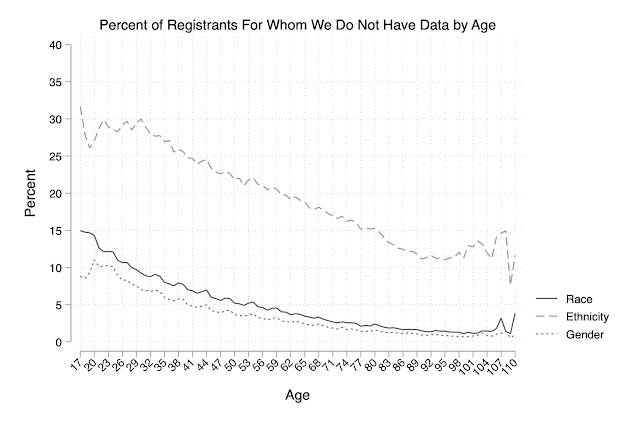 For example, in combining both race and ethnic categories to create a racial-ethnic classification, 57 percent of those who did not report a race and ethnicity category were either members of the Millennial (39 percent) and Generation Z (18 percent) generations. 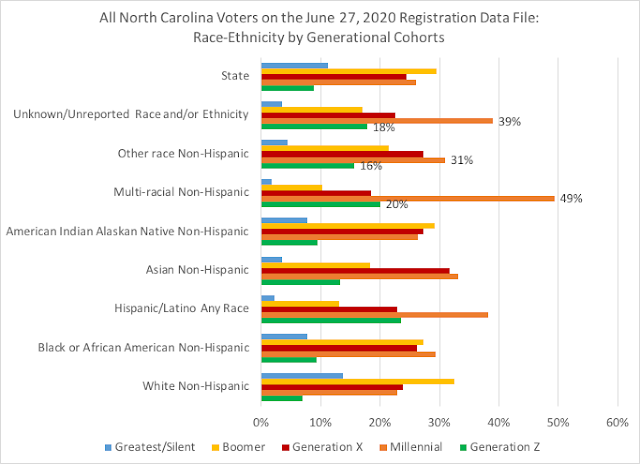 In taking the June 27 data file and looking at the years when voters registered, we see this growth of the "no-labels" happening since Millennials and Generation Z North Carolinians began to register. 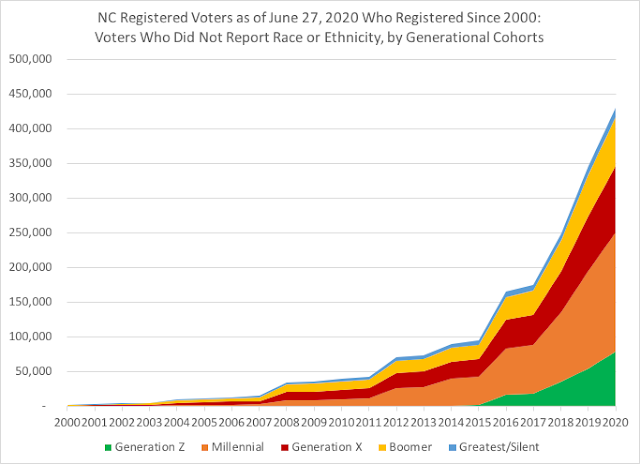 The percentages of non-reporting race/ethnicity show the remarkable climb of younger voters opting out of giving their racial or ethnic classifications. 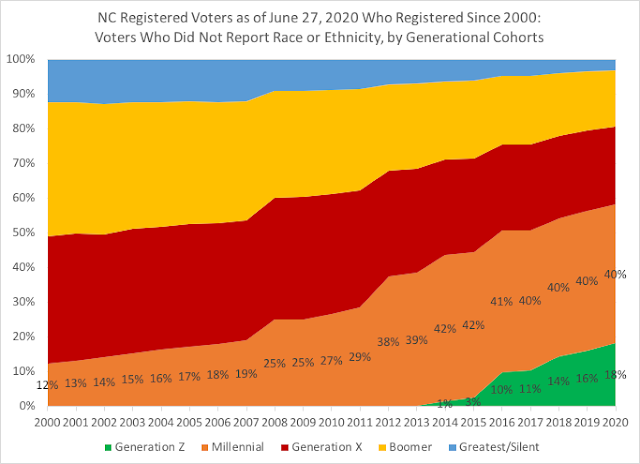 From research about younger Americans (Millennials, currently ages 24-39, and Generation Z, who are 23 or younger), we know that these generational cohorts are among the most diversified in the nation’s history. Among Millennials, diversification is a hallmark of this generation: the Brookings Institute found that "Millennials are distinct from earlier young adult generations in one important demographic respect: their racial and ethnic diversity. Overall, millennials are 55.8 percent white and nearly 30 percent 'new minorities'— Hispanic, Asian, and those identifying as two or more races" (emphasis added).

Political scientists also note the significant racial and ethnic diversification of the Millennial Generation and its impact on the nation's politics: for example, Drs. Stella Rouse and Ashley Ross in their research finds that 'identity politics' is rapidly changing, thanks to Millennial's approach to race and ethnicity, primarily by expanding beyond simple categories of race and ethnicity.

We are likely seeing this 'label avoidance' play out in North Carolina's voter registration, and if the past few years worth of data shows us anything, it will likely continue to play out in the future. For example, among Generation Z, the use of non-binary gender categories is the highest among the generations: according to another Pew Research Center analysis, 35 percent of the youngest generation say they know someone who prefers to go by gender-neutral pronouns, compared to 25 percent of Millennials, 16 percent of Generation X, and 12 percent of Boomers.

This approach to 'opting out' of conventional categories will likely grow in the coming years, and those who study these dynamics may have to reconsider the conceptualization of race and ethnicity.

So What Does This Mean?

Thus far, the missing data for race, ethnicity, and gender do not represent a very large proportion of the electorate, but folks who work with these data—or with results generated from these data well be well—advised to pay attention to these growing trends. And, as time goes on and as the people who are registering now make up a larger proportion of the electorate, our evidence regarding gender, ethnicity, and race may be less and less reliable. In the same way that smart news consumers have begun to expect discussions of the margin of error when evaluating polls, the same news consumers should expect discussions of who is missing from analysis conducted through the voter file.

In the end, we will continue to work with the voter registration and voter history files in the future—after all, they still provide the best view we have of the North Carolina electorate. We will just be placing increasing emphasis on the footnote of missing data—and we encourage others who traffic in these datasets to do the same.

Dr. Michael Bitzer holds the Leonard Chair of Political Science at Catawba College, where he is a professor of politics and history; he tweets at @bowtiepolitics.
By OldNorthStatePolitics.com - July 06, 2020