It's time for another early voting update in NC. But this time we've got some in person results, too. And, in a fortuitous turn of events, today happens to be Vote Early Day. See below for the weekly update.

Caution: Read the Instructions Before Using

Before getting to the meat of the analysis, let's talk a little bit about how not to use these data.

When I post these data on Twitter, I warn people that these data are not useful to forecast winners and losers. Over the years, I have tried to reinforce this a number of ways. Sometimes I remind people that  these data represent a small proportion of the overall electorate. Other times I discuss the partisan patterns in who chooses various methods of voting. When I'm feeling creative, I tell people that if your goal is to predict the future, they're better off practicing an off-the-wall divination technique, like conchomancy than relying on early voting data.

Writing for the Washington Post, David Byler used language that conveys the same idea, but more formally and more forcefully. He explains, "Election forecasts grounded in the early vote are plagued by problems: They have a poor track record, they lend themselves to conflicting interpretations, and the pandemic’s aftereffects muddy the data."

Enough said. They're not good for forecasting. But that doesn't mean they're good for nothing.

Early voting data may be about as useful as a bike helmet made of jello in forecasting elections, but they can tell us a lot about how North Carolinians vote. They tell us how the pandemic has changed how we cast our votes. They can tell us whether voting patterns are similar to previous years, or whether this election will be more unpredictable. They can also help reinforce trust in elections by showing just how transparent the voting process is in our state. I would argue those are all goals worth pursuing, even if these data can't help us forecast an outcome that we'll know for certain in less than two weeks.

So, if you were expecting the keys to unlocking the future, feel free to close this screen down. If you're still in, however, let's get to it.

It's a lot of people But how does it compare to previous years?

Turns out the answer is that it depends on how you count. Let's start with mail voting; that's the easy one.

As you can see from the figure below, mail voting is up compared to 2018. Through October 27, 2022, Around 80,000 people have cast a vote by mail in North Carolina and have had that vote accepted and reported to the NC State Board of Elections. That's over 2 times the number accepted the same number of days before the election in 2018. 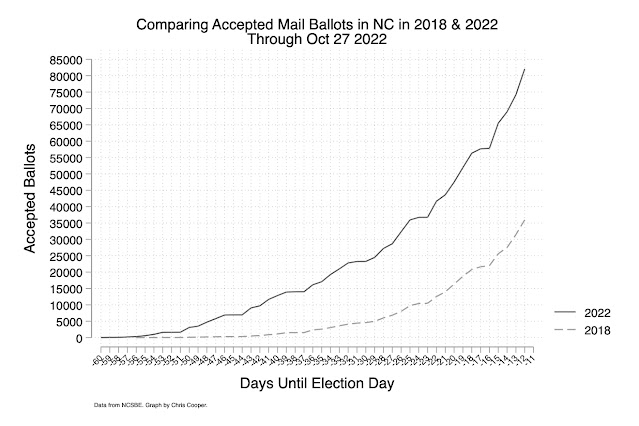 While the mail data presentation is straightforward, it's a little trickier to compare 2018 in person early (one-stop) votes to 2022 one-stop votes because there was one more day of early voting in 2018 than in 2022. Comparing 2018 to 2022 isn't apples to oranges, but it is Granny Smith to Golden Delicious.

Here's one stab at it. This one just tracks the same point in time. Using this metric, one stop voting is down slightly from the same day in 2018. 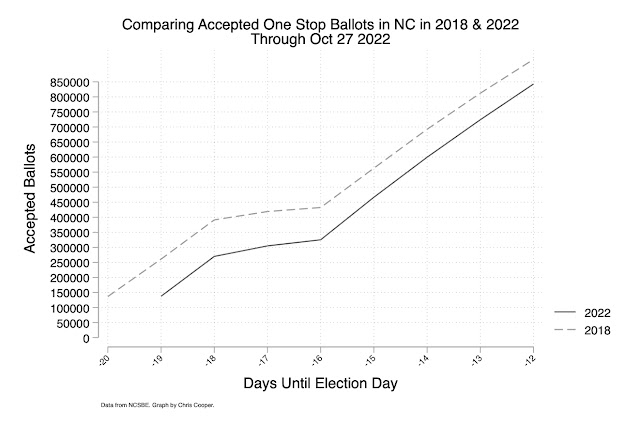 What does that mean? The song remains (mostly) the same.

The one exception to that rule is age where the 2022 early and absentee voters thus far are considerably older than they were in 2018.

If nothing else, this graph should reinforce why these data are not useful for prediction. The most competitive districts in the state (NC-13 and NC-1) fall below turnout in districts that most consider to be less competitive (NC-4, NC-7, and NC-11). 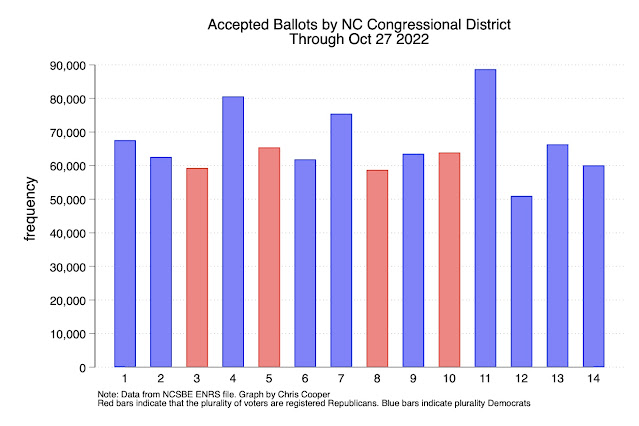 During the one-stop voting period, North Carolina voters can register to vote and cast a vote in the same day. It's important to note that changing voter registration to a different county "counts" in these same day registration totals.

I'm updating these data for NC most days on Twitter as are Michael Bitzer, Andy Jackson, and Gerry Cohen, among others. Our Palmetto State friend Jordan Ragusa is doing similar updates for South Carolina, and Michael McDonald at the University of Florida updates totals for multiple states throughout the election season.

And, if you simply want an extended cut like this one for North Carolina, Michael Bitzer will be back in this space next week.