Some Thoughts about the 2022 Election in North Carolina

What follows is a series of somewhat disjointed thoughts about the 2022 election in North Carolina. Some of these are points that I think have not gotten enough attention. Some are my take on stories you've read before. Sometimes I just repeat things others have said that I thought were particularly smart (with citation; i'm not a monster). All of what follows is meant for people who sometimes think about things other than politics. If the politicos find something interesting here, all the better. But that's not the point.

There's no narrative thread, no organizing theme and no central takeaway to what follows. There's no forecast and no "keys to the election" that await you. Heck, there's not even a conclusion. I hope what follows helps put a few things in context, but I make no grand promises. So, with the worst pitch ever (a career in sales was never in my future), here we go:

The bottom line is that for Democrats in 2022, the realistic goal is to limit loses and avoid a shellacking or a thumping, not to realize gains.

About Those Unaffiliated Voters

After the Dobbs decision, many states experienced a rise in the share of female registered voters. Not North Carolina. Likewise, some states have seen an increase in female early voting turnout. Not North Carolina. We might still see a Dobbs effect on election day, but if it's there, it's not apparent in voter registration patterns or early voting trends.
Races to Watch
Nationally, I can't add much to what the Cook Political Report with Amy Walter and Sabato's Crystal Ball have to offer, so I'll just link to them and move on.
In terms of federal offices in North Carolina: I'm, of course, watching the NC Senate race. The polling and the national mood suggest that Republican Ted Budd is the favorite, but we'll see how it plays out. In the House of Representatives, I'll be watching NC-13 (the most competitive district in the state, on paper), and NC-1 (leans Democrat, but could be interesting) closely. I'll pay attention to NC-11 because I'll always pay attention to NC-11.
The key to watching the General Assembly races isn't to watch who gets the majority (Republicans are all but assured a majority in both chambers), but rather whether the Republicans get the supermajority; the number of seats that allows the Republicans to override Governor Cooper's veto without a single Democratic vote. That critical line in the sand is 30 seats in the NC Senate and 72 in the House. Here's a good Twitter thread from Dawn Vaughn about what a supermajority means in practice.
So, which races to watch? There are lots of different ways to answer this question, but a good place to start is with the list. by Brian Lewis and Skye David of New Frame Government Affairs. They list:
Senate: NC 3, 17, 7, 18, 19
House: NC 63, 5, 25, 24, 48, 9, 35, 43
If you want to dig deeper, I recommend checking out the Civitas Partisan Index (CPI) at the John Locke Foundation. They don't consider candidate quality, just past voting behavior, but their estimates are reliable. If even that's not enough detail, you can download past voting behavior by district from my web site (4th bullet down) and come up with your own list. Don't worry too much about which metric you choose-they all give you about the same answer.
And, of course, if you're not paying attention to the NC State Supreme Court elections, then you're not paying attention. Democrats currently hold a one-seat majority. If the Republicans win either of the two seats (one open, one with an incumbent running), then they will take over the majority. Good background on the race & on the larger issues at stake can be found in this Jeffrey Billman piece for the Assembly.
There are so many local elections to watch, but here's a (far from exhaustive) short list:
Sheriff: There are over 40 competitive Sheriff races across the state. Some I'm watching include Alamance, Columbus, Forsyth, Jackson, Pasquotank, and Wake.
County Commission: According to data from the NC Association of County Commissioners, Republicans currently hold the majority in 61 of North Carolina's 100 county commissions; 2 have no majority and the remainder have Democratic majorities. For one to watch, I'll take a convenient example and point out my home county of Jackson where the Democrats currently hold a 4-1 margin, but three Democratic seats are up for re-election.
What to Expect on Election Night
Rather than reinvent the wheel, I'll just link to three pieces I like about how the counting process works, and what we might expect (and what we should not expect) on election night:
Prefer video? Check this out from Laura Leslie
Audio? Here's a conversation between Rusty Jacobs and me
Print? This one from Will Doran even includes a line or two that made me chuckle
Recount
Recounts are touched on in the explainers above, but they're important enough that I'm throwing them in a separate bullet. Here are the rules. Here are the rules in words that normal people can understand
Gender Diversity in the NC General Assembly
The vast majority of attention on election night will be focused on political parties (Rs and Ds, with a. G, L or U thrown in from time to time). But there are lots of ways in which the 2022 election could produce a different body of elected officials. One example is gender.
According to data from Rutgers University's Center for American Women and Politics, females make up 16 of the 50 North Carolina Senate seats and 27 of the 120 NC House seats. What might we expect after election night? If women win only the seats they are guaranteed to win, then we could have as few as 5 women in the NC Senate and 16 women in the NC House.
If female candidates win every election possible, we would end up with 52 women in the NC House and 24 women in the Seat. Let's pause on that for a second--if women win every race in which they're running, we would still have a General Assembly that is composed of a majority of men.
If every race falls follows the Trump vote in 2020 (a slightly flawed, but not unreasonable assumption) then we would expect to see 19 women elected to the NC Senate and 26 women elected to the House--a increase of 3 in the Senate and a decrease of 1 in the House.
The bottom line is that we shouldn't expect a radical change in the number of women in our General Assembly. For more context on why this matters, see this report from our friends at Meredith College.
Turnout
Here's the turnout in NC midterms from 1974-2018. We certainly won't see turnout as high as 1990 (when Helms v. Gantt topped the ticket), but if early and mail voting is any indication, we'll see turnout that exceeds 2018 (ballots received before election day is running ~13% higher than 2018). I expect that will give us turnout somewhere in the high 50s. 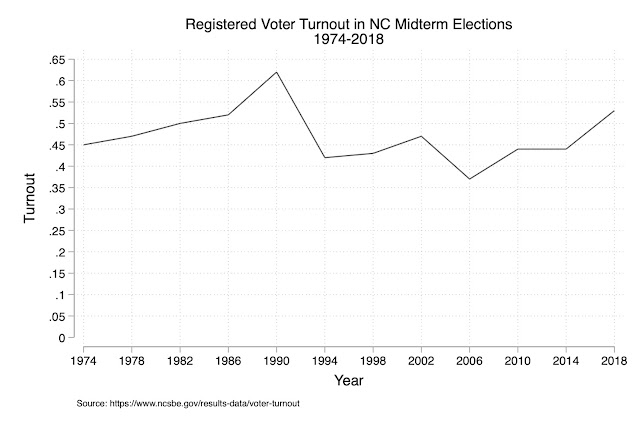 Come on Chris, Just Give me Some Links!
If I could have just two things to consult on election night, I'd have:
1.  This sheet from Bolts Magazine (lists elections across the country in a format you can print and write on.
2. This link to election results from the NC State Board of Elections. Just select today's date and practice hitting refresh. That's what I'll be doing.
----
Chris Cooper is the Madison Distinguished Professor of Political Science and Public Affairs at Western Carolina University. He tweets at @chriscooperwcu
By Chris Cooper - November 08, 2022