About Last Night: A Quick Look Back at the NC-11 Republican 2nd Primary

Let me get the confession out of the way at the beginning: I didn’t see it coming either. I assumed the race would be close. I thought Cawthorn might pull it out, but I never imagined that he would garner almost twice as many votes as Bennett. Nor did I predict that he would win Haywood County—Bennett’s home county and her geographic base. In the end, Cawthorn won every county except Rutherford—a county that sits only partly in the 11th Congressional District. In the words of Barack Obama, it was a “shellacking;” George W. Bush might have called it a “thumping.”

I’ll also admit that the types of deep data-dives that fit with the mission of this blog may seem more interesting when races are close—after all, there’s not much need to pour over the box score from the fifth inning when one team ends the game with twice as many runs as the other. Nonetheless, it is a long season, so it’s important to step back and see what the data tell us about what happened last night, and what this might tell us about the state of politics in North Carolina moving forward.

The best mark on the wall we had about turnout in a 2nd primary comes from 2012 when Mark Meadows faced Vance Patterson in a runoff primary in the very same district. In that race, 94,461 people cast votes in the first primary and 22,991 voted in the second primary (24.33% of the first primary). In the first primary in 2020, 90,4696 votes were accepted; if turnout was similar to 2012, that means that we would expect ~22,075 votes in the second primary. The reality far exceeded that mark on the wall--46,250 turned out in the 2020 second primary, just shy of 51% of the turnout in the first Republican primary, and about 24,000 votes greater than the estimate from 2012 would predict.

Turnout (as a percentage of 1st primary turnout) was highest in Cawthorn’s home county of Henderson, but exceeded the 24.33% mark on the wall in every county in the district. This suggests that Cawthorn’s victory cannot simply be attributed to low turnout in a low-salience election. This turnout, combined with his margin of victory reinforces the conclusion that there was considerable momentum behind Cawthorn’s candidacy. 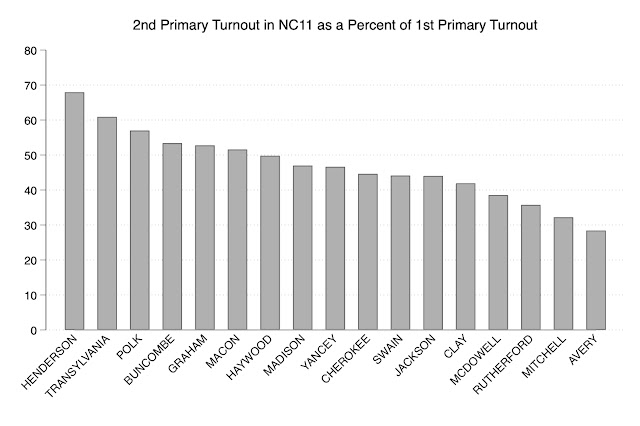 Taken as a whole, the county-level results presented below reinforce the primary storyline from last night—Madison Cawthorn beat Lynda Bennett in every county except Rutherford—and beat her handily in most of those counties. What is more surprising, however, is that Cawthorn won just three counties in the first primary (Buncombe, Henderson, and Polk), yet his largest margin in the second primary was not in any of those three counties, but rather was in Graham County (which was won by Jim Davis in the first primary). It appears that Cawthorn’s key to victory was driven not just by turnout in his geographic base. 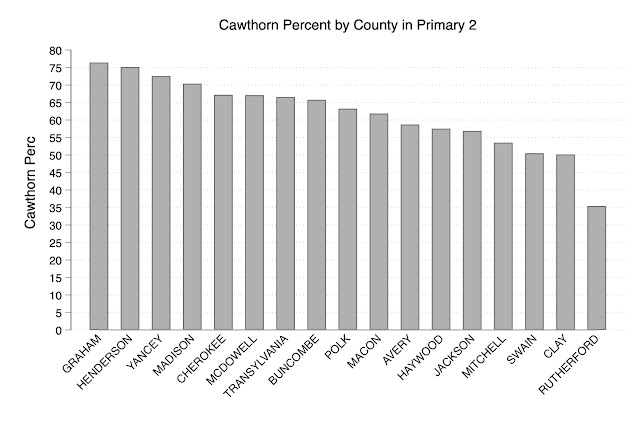 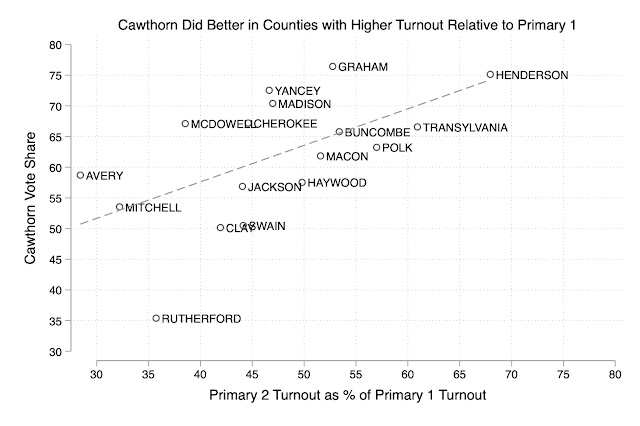 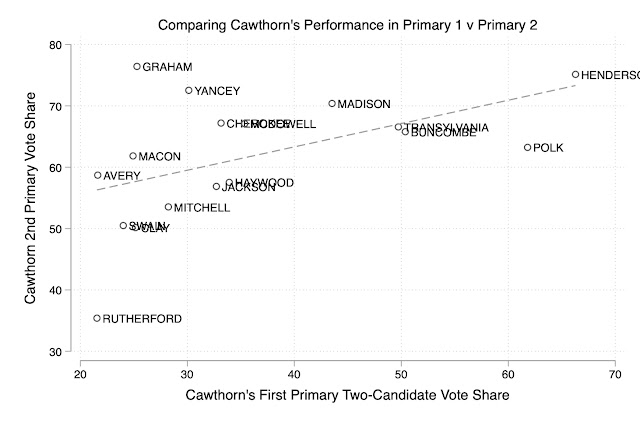 There was a good bit of speculation on mail-in voting prior to the election. I touched on some of that in my previous posts about the early and absentee vote (including the characteristics of the early voters), but now we have much more information about the entirety of the vote in the second primary.

In the first primary, ~1.2 percent off all votes cast were cast by mail. In the second primary, just shy of three times that proportion (~3.2%) were mail votes. Although Cawthorn garnered the most votes, regardless of the type of ballot cast, his percent of the vote was smaller in mail-in voting (58%) than in absentee one-stop (67%) or election day votes (65%).

The proportion of mail-in ballots in the 2nd primary was a far-cry from some estimates, but still represents a significant increase over the first primary. It’s also possible that given the partisan nature of the national conversation about mail-in voting that Democrats may be more likely to avail themselves of the vote-by-mail option in November’s General Election than Republicans were in this second primary.

It is no secret that the 11th is friendly to the Republican Party. Despite recent redistricting that brought the bright blue dot of Asheville back in the district, ~57% of the 11th congressional district voted for Trump in the last election. All else being equal, therefore, we would expect the Republican to win in the General Election. And while that fact remains and this district “leans” Republican by any metric, the General Election result is far from preordained. The Democrat, Moe Davis, is a quality candidate who has been running for the General Election while Cawthorn was spending his time and resources running in a second primary. Davis is also the type of candidate who has the potential to spur turnout in population centers like Asheville. As Madison Cawthorn just demonstrated, sometimes candidate characteristics and the specifics of the race can make the difference and swing an election in an unexpected candidate.

All of these data are all tentative and nothing is final until the canvas is complete on July 6. There are also some patterns and questions that we simply can’t answer with the data that are available the morning after a race.  Finally, I’ll add that there are many, many important contours to this race that I didn’t touch on here—Cawthorn’s policy positions, his background, the specifics of his strategy, what this suggests about the power of local politics parties even in a nationalized environment—the list goes on.

Chris Cooper is Madison Distinguished Professor of Political Science and Public Affairs at Western Carolina University. He tweets at @chriscooperwcu and can be reached by email at ccooper@email.wcu.edu