Assessing The Early Vote in the NC-11 2nd Primary


Early voting has concluded for the 2nd primary in North Carolina’s 11th Congressional District. Although mail-in ballots will continue to be counted and accepted through election day, this seems like a good time to stop and take stock of the “early” vote in the 11th (defined for this piece as all votes accepted through the last day of in-person early voting). In addition to additional mail-in votes, there will almost certainly be some slight adjustment to the overall numbers in the coming days.

Other than a brief reminder of the candidates (Madison Cawthorn and Lynda Bennett) and their home counties (Henderson and Haywood, respectively), I’ll leave a detailed description of the players and the circumstances out of this one. If you want to catch-up, I’ve included some more description in my first post for Old North State (along with links to coverage from local and national journalists). I also wrote an entry for the London School of Economics American Politics blog that summarizes many of the players and events and an article in yesterday's Asheville Citizen Times that describes why this election is so important. Since those pieces posted, Chris Cioffi had a helpful article in Roll Call and Kyle Perrotti of the Waynesville Mountaineer and Gary Robertson of the AP posted good preview articles.

On to what we know thus far: 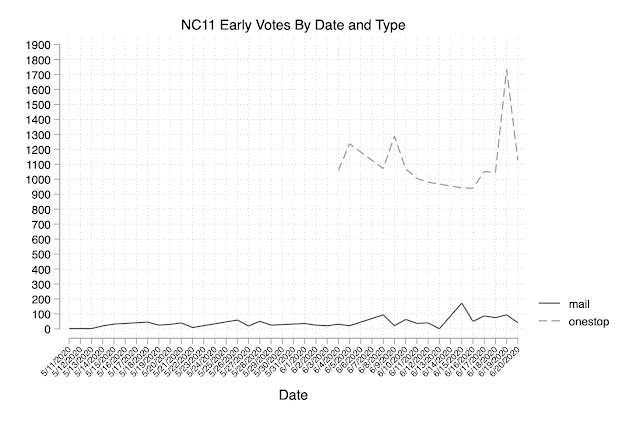 How Does This Compare to the First Primary?

In the first Republican primary, 35,428 in person, early votes and 1,100 mail-in votes were accepted, meaning that the in person-early vote in the 2nd primary was ~41% of the in person early vote in the 1st primary. We expect much lower turnout in a 2nd primary than in a first primary; if these patterns hold through election day, this will represent higher turnout than many observers (including me) predicted.

Who Turned Out to Vote Early?

Another way to understand who voted early in the second primary is to determine what percentage of the 2nd primary early electorate voted in the first primary. Here, it appears that 91% of the 2nd early primary voters were repeat customers—folks who voted in the first and second primary. Repeat customers were significantly older, less likely to be female, less likely to vote by mail and more likely to be Republicans than their counterparts who voted in the 2nd, but not the first primary (I’ll call those “Newbies”). Perhaps most importantly, Newbies were more than twice as likely to use vote-by-mail than repeat customers. The increase in vote-by-mail, therefore does not simply represent people shifting how they vote, but rather a method that is bringing in a small, but potentially important number of new voters.

Where was Turnout Highest?

We don’t know how individual voters voted, so the best sense we have of who’s turning out their voters is to attempt to read the tea leaves of geography. This is a bit fraught, as we can’t infer individual votes from county-level voter history. Nonetheless, the geography of turnout gives us the best possible sense of who’s turning out their potential voters. 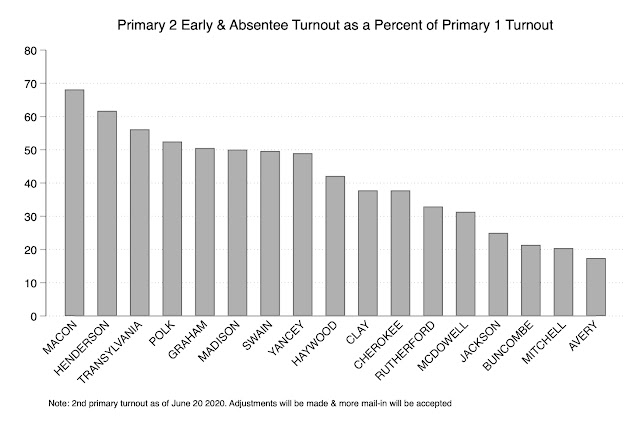 While the above graph interesting and potentially important, it ignores the size of the potential electorate. For example, while the increase in Polk is indeed important, it ignores the size of the Polk electorate, which is small, compared to other counties in the region. The next graph provides a different window into the geography of turnout by including information for both the percent of the early electorate that hails from each county, as well as the percent of the potential electorate (Republican voters + Unaffiliated voters who voted in the Republican first Primary or did not vote in the first Primary) from each county. 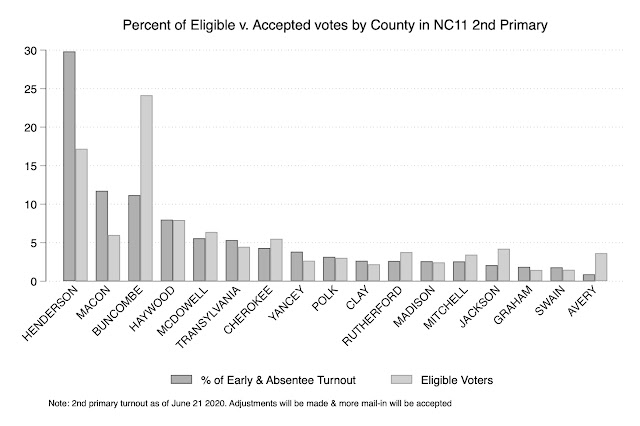 While the data are sliced differently in this graph, the message is similar: Henderson and Macon counties are overperforming by virtually any metric. Buncombe, a county which Cawthorn barely won, however, is underperforming, relative to potential turnout.

Now for the boring, but important caveats: everything that is described above above is only early and absentee balloting through June 21, 2020. More mail-in votes will come in and even the in-person early voting will likely have small adjustments. In addition, and most importantly, we don’t know what will happen on election day. We can make some estimates based on previous elections, but given the state of the race and the state of the world, predicting turnout on election day is anybody's guess. Finally, although we can make some educated guesses about what this all means (and I will below), we have no idea how any individual voted and we could very well be surprised when the votes are counted.

With the caveats out there, here are some early thoughts about what this all might mean:

1)    The increase in mail-in balloting is real: While it won’t approach the numbers that some had suggested, mail-in voting is indeed up in this second runoff. Election officials need to plan for increased mail-in moving forward, and political observers (myself included) need to be prepared for election nights that might begin to resemble election fortnights as ballots continue to come in.
2)    This race is likely to be close: there’s good news in these data for both candidates: clearly the robust turnout in Henderson County is a good sign for Madison Cawthorn. With that said, increased turnout in Henderson County won’t be enough to win this election. In fact, if we simulate the election results with current county-level turnout patterns and assume that all votes that went to anyone other than Bennett or Cawthorn in the first primary are split evenly between the two, Bennett would still win handily.  Clearly that assumption is unrealistic, but it reveals the fact that in order for Cawthorn to pull of an upset victory, he needs to increase turnout in his geographic base and persuade voters who previously supported other candidates to vote for him. Lower than expected turnout in Buncombe County is also likely good news for Bennett.
3)    Macon County may be the key: Macon County turnout is higher than anticipated, but I’m not sure who this benefits. On the one hand, Bennett performed much better than Cawthorn in Macon in the first primary, therefore this could be good for Bennett. On the other hand, Jim Davis, not Lynda Bennett won Macon County in the first primary. Whether Davis’ voters end up going for Bennett or Cawthorn may very well decide this election.

Election Day is Tuesday, June 23. I’ll post a final update on this primary as soon as I can get the data together after election day. That update will also include some comparisons to the last time we had a second primary in the 11th—a primary that was won by a political newcomer named Mark Meadows.


----
Chris Cooper is Madison Distinguished Professor of Political Science and Public Affairs at Western Carolina University. He tweets @chriscooperwcu and can be contacted by email at ccooper@email.wcu.edu.