It Ain’t Over Till It’s Over: Taking the Temperature of the 11th Congressional District Runoff


Just when you thought it was safe to turn your attention to the General Election, it turns out there are still two North Carolina primaries left to decide. The first, in Columbus County remains undecided because some voters received the wrong ballot on election day. As a result, The State Board of Elections called for a new Republican primary to take place on June 23 for the Columbus County District 2 Commission race.

The second undecided primary occurred for more traditional reasons: a runoff. Like much of the South, North Carolina election law requires that candidates receive a threshold percentage of the vote to move forward. If the winner of a primary does not meet this threshold (30 percent in North Carolina), the second-place candidate can request a second primary. And, this is exactly what happened in North Carolina’s 11th congressional district where Lynda Bennett earned the most votes in the Republican primary, but was more than seven percentage points shy of the 30 percent threshold. 24-year old Madison Cawthorn eeked out second place and filed for a second primary. Election Day for this primary will occur June 23, although mail-in and one-stop early voting is already under way.

The circumstances that led to this primary, and the specifics of the candidates in the race are fascinating, but have been covered extensively by local and national reporters. In this spirit of this blog, I’m going to limit myself here to what the early returns can tell us about the candidates and whether early voting tea leaves can uncover anything about understanding elections in a time of Coronavirus. And, although the Columbus County race is fascinating, what follows only reflects returns from the 11th Congressional District.

Who Is Turning Out?


While the circumstances are not identical, the 2012 Republican second primary in the 11th congressional district provides a helpful mark-on-the-wall for what kind of turnout we might expect in this runoff election. In the 2012 election, Mark Meadows was forced into a Republican runoff in the 11th against second place finisher Vance Patterson. ~94,000 people voted in the first Republican primary v. ~23,000 voters who voted in the second primary. Fast forward to 2020 where ~91,000 people voted in the first primary—if similar numbers hold, we would expect to see ~22,000 people eventually turnout in the 2nd primary election.

Thus far, we are on pace to surpass the 2012 mark on the wall. With another week of early voting and election day itself still to go, 8,456 votes have been accepted. As the table below shows, these voters resemble the demographic profile of the voters in the first primary on almost every metric, although there is a small, but significant age difference across the two primaries.

By matching voter records across the two primaries, we can also see that only about 7 percent of second primary voters sat out in the first primary. These “new voters” are significantly younger (average age of 61 v. 66 years old), more likely to be unaffiliated (32% v. 25%) and more likely to choose the vote-by-mail option than the repeat voters.

Where Are They Turning Out?

Of course, not everyone is eligible to vote in the 2nd primary. Eligible voters are limited to (1) Registered Republicans, (2) Registered Unaffiliated Voters who did not vote in the first primary and, (3) Registered Unaffiliated Voters who chose the Republican ballot in the first primary. That means that simply examining the voter registration data is not a particularly helpful way to understand potential turnout. After sussing out the actual potential voters in the NC11 primary, a much clearer picture emerges about where the voters are. And, as the figure below suggests, the potential voters (the blue bars below) are clustered in Buncombe, Henderson, and Haywood Counties. 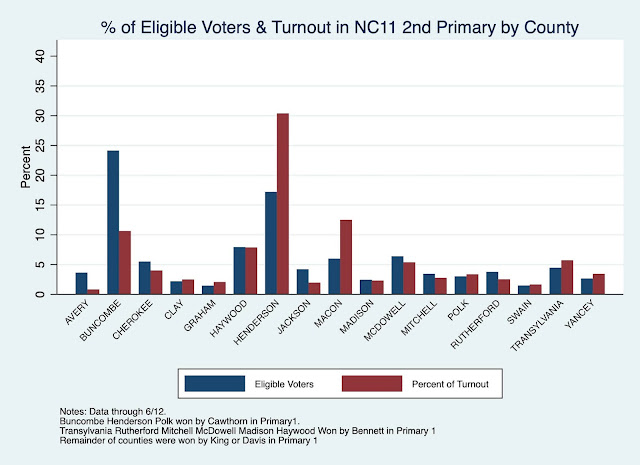 Examining the red bars shows us voter turnout by county thus far. And here, it’s clear that Henderson (Cawthorn’s home county) is overperforming relative to the number of eligible voters in the county, as is Macon (a county won by Jim Davis in the 1st primary, but where Cawthorn finished third). Turnout in Haywood (Bennett’s home county) is steady, whereas Buncombe, a Cawthorn stronghold in the 1st primary, is underperforming relative to the number of eligible voters. Clearly there’s something for each candidate to love and loathe in this quick review of geographic voting patterns, but, unless vote choice is radically different than the first primary, it appears that neither candidate is likely to cruise to an easy victory.

What About Mail-in Votes?

Mail-in voting has, of course, been the subject of considerable debate during Covid-19. Some voting rights advocates have suggested that vote-by-mail may be as high as 40% in the General Election, while others have argued that there won’t be much of an increase, if any. At least in this 2nd primary, the truth lies in the middle.

Thus far, about 9% of all votes accepted in the NC11 second Republican primary have been mail-in (the remainder are in-person early voting). While this may not sound like a lot, this represents more than 3 times the rate of mail-in voting during the first primary.

Thanks to Michael for loaning me the keys to the blog for a bit. For any data and NC Politics geeks (and, I’m guessing that describes anyone who’s read this far), I’ll do one more NC11 early voting update at the end of this week, and a brief election wrap-up the day after the second primary concludes. I also plan to add some more thoughts on various aspects of NC politics as we approach election day.

----
Chris Cooper is Madison Distinguished Professor of Political Science and Public Affairs at Western Carolina University. He tweets @chriscooperwcu and can be contacted by email at ccooper@email.wcu.edu.
By Chris Cooper - June 15, 2020