With another day of mail-in ballot data in from the NC State Board of Elections, a bit more of a trend line can be presented of the 12,541 requested mail ballots so far for this year's election. First, the comparison between 2014's and 2018's requests for mail ballots, by the days prior to Election Day: 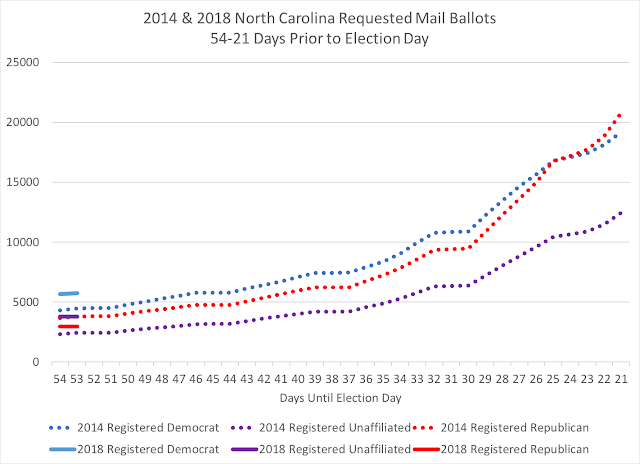 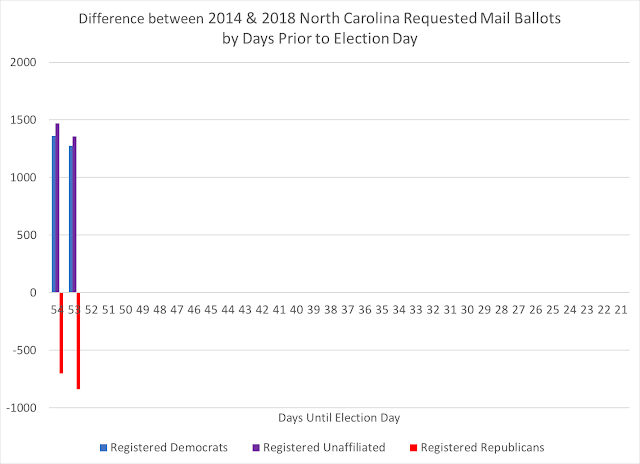 The racial composition so far shows white voters ahead of their percentage (69) of overall registered voters, with black/African-American voters below their voter registration percentage (22). 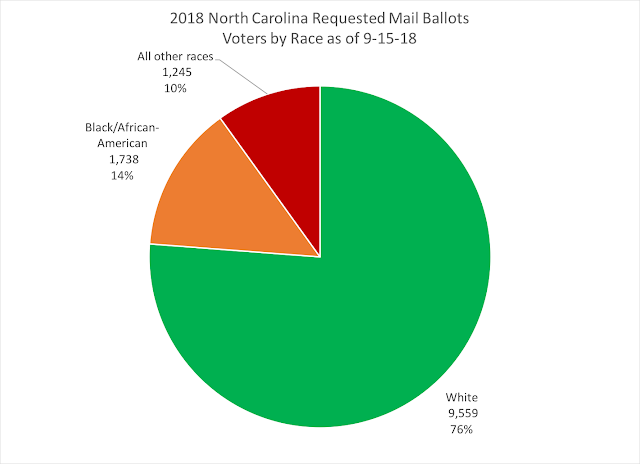 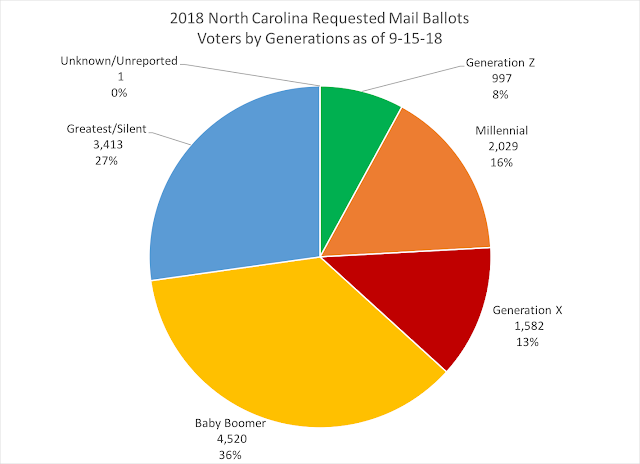 Update: I decided to look at the requested mail ballots by party registrations within each generational cohort: 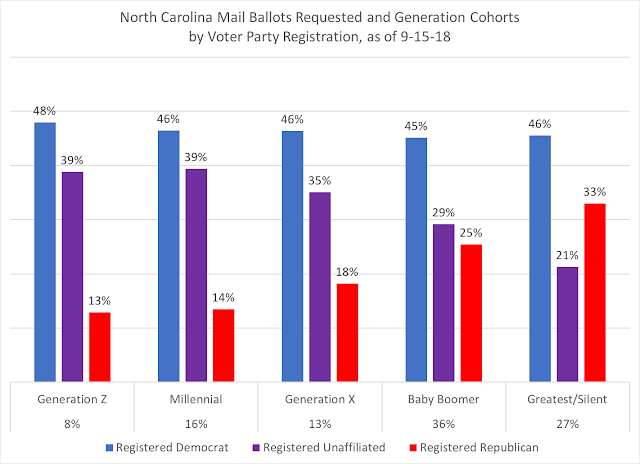 Only 21 mail ballots have been returned and accepted, considerably down from the same days prior to the Election in 2014 for the three major party registrations (Democratic, Republican, and unaffiliated): 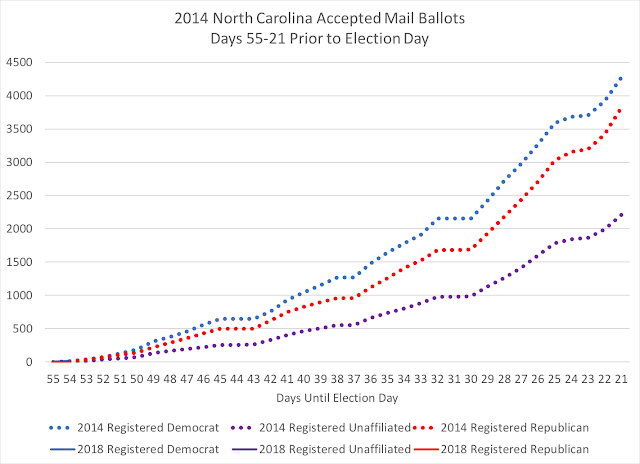 And the differences in returned and accepted ballots by day to 2014: 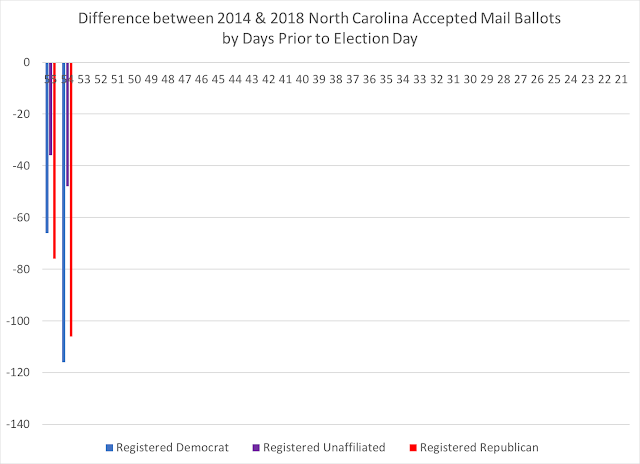 Granted, the numbers of accepted ballots will likely be delayed due to Hurricane Florence, but the requested numbers seem to show a distinctive up-tick from four years ago. Another aspect of these voters who have requested mail ballots so far is, did they vote in 2014's mid-term election, and if so, what was their vote method (absentee by mail, absentee in person, on Election Day, and so forth)?

The data from these 12,000+ mail ballot requesting voters and their 2014 vote methods are: 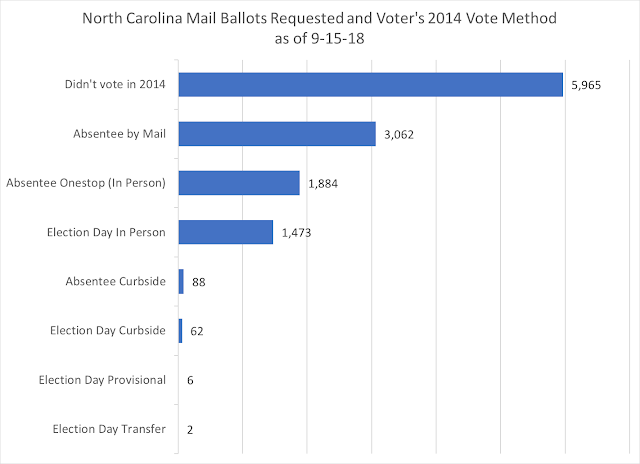 The party registration of these voters, and if and how they voted in 2014, are: 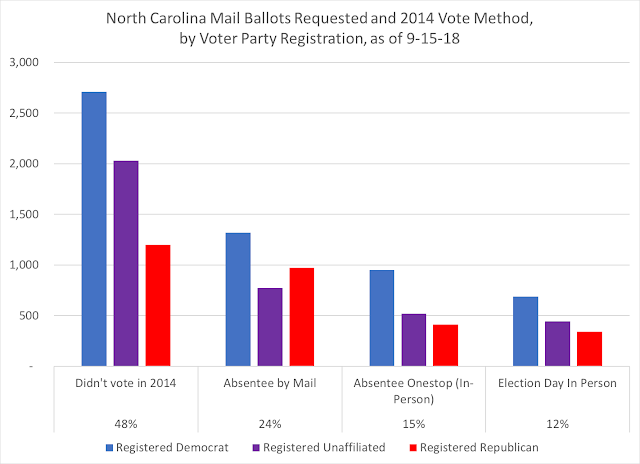 Of those who voted by mail in 2014 and have requested mail ballots this year:


Of those who voted absentee onestop (in person early) in 2014 and have requested mail ballots this year:


And those who voted on Election Day in 2014 and have requested mail ballots this year:

I'll likely update these statistics on Wednesday and Saturday of next week, especially with the amount of issues the hurricane is causing in the state. Hope everyone is safe out there.
By OldNorthStatePolitics.com - September 15, 2018