As North Carolina surveys the damage and continues to dry out from the aftermath of Hurricane Florence, voters are requesting and casting ballots already for the November 6 general election in the Old North State. Here's a review of where the numbers stand regarding absentee by mail ballots, especially by requested, sent, and accepted ballots.

As of September 19th, the number of requested ballots has hit 15,704, with the following party registration breakdown: 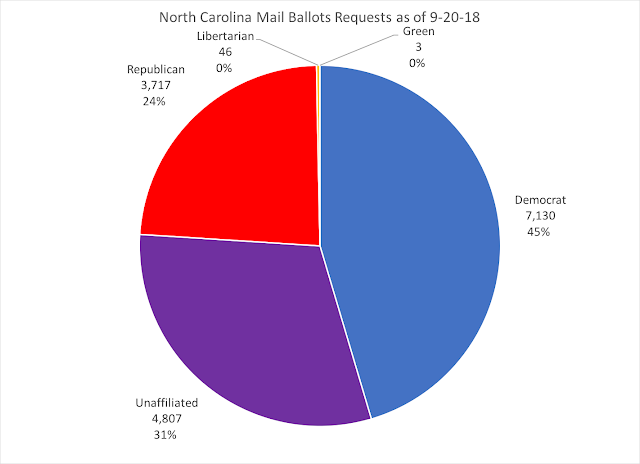 Normally, in this method of voting, registered Republicans tend to dominate mail-in ballots, but even in the early trends, they are third with barely a quarter of the requested ballots so far.


In looking at the 15,000 requested mail ballots by generational cohorts: 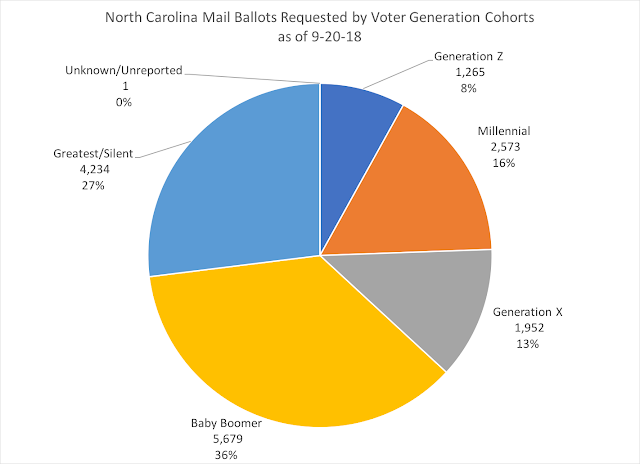 Typically, older voters make up the plurality of mail-in absentee ballots in North Carolina, and this holds true so far, with voters over the age of 54 at nearly two-thirds of the requested ballots.

A breakdown of these generational cohorts by party registration: 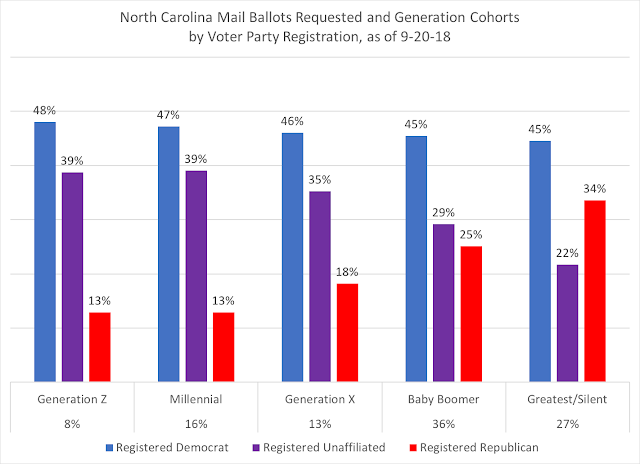 With the devastating effects of Hurricane Florence on a substantial amount of the state, ballots sent out have lagged behind the requested numbers, with a little over 11,000 mailed out by various county boards of elections: 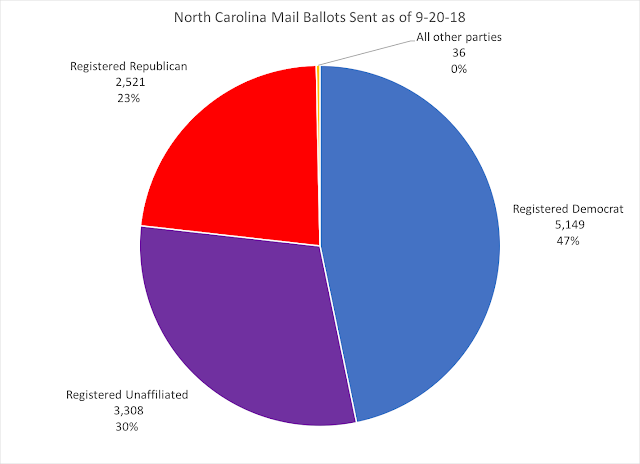 Finally, those ballots that have been returned and accepted as votes are only 180: 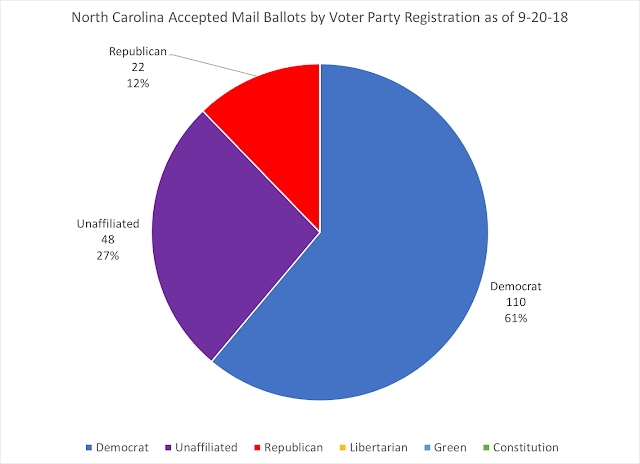 With the focus on congressional elections this year in the Old North State, districts 4 (a safe Democratic seat) and 9 (a competitive seat held by Republicans) continue to have the most requested ballots within the thirteen districts: 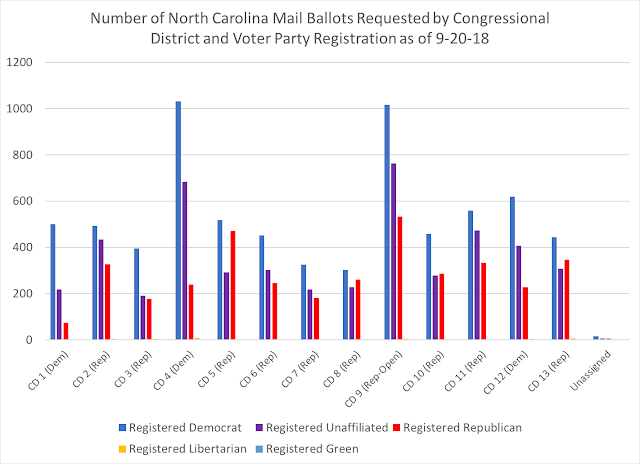 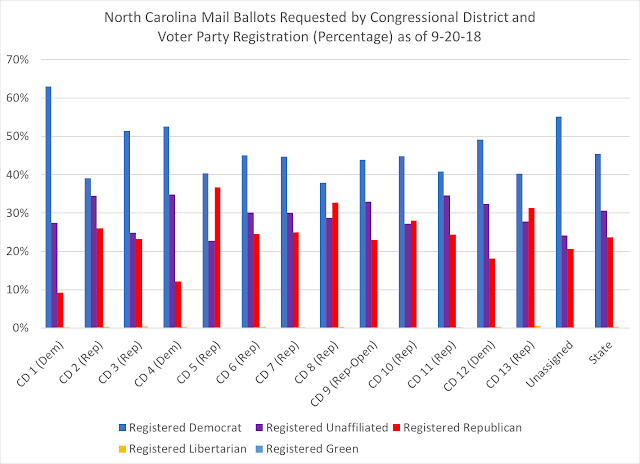 Comparing this year's numbers (same day) to the last mid-term election (in 2014, which had a highly competitive U.S. Senate race), the early numbers are quite impressive for registered Democrats and unaffiliated voters requesting ballots: 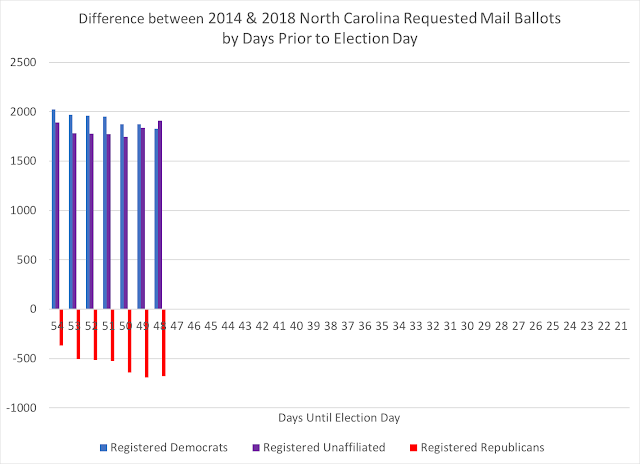 In looking at the accepted ballots, there is a considerable lag, however, in the comparison to 2014's same day totals for all three of the major party registration groups (Democratic, Republican, and unaffiliated): 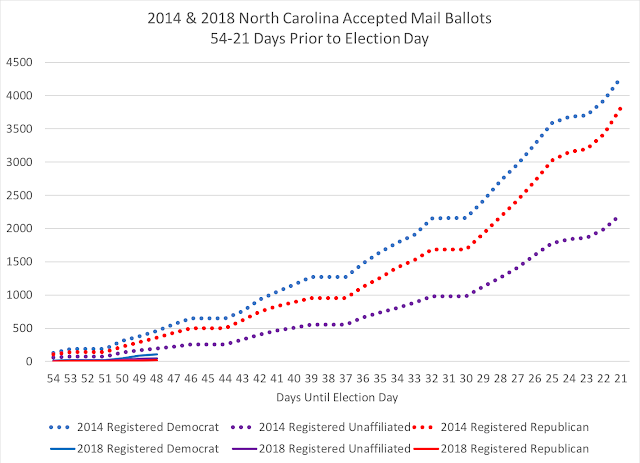 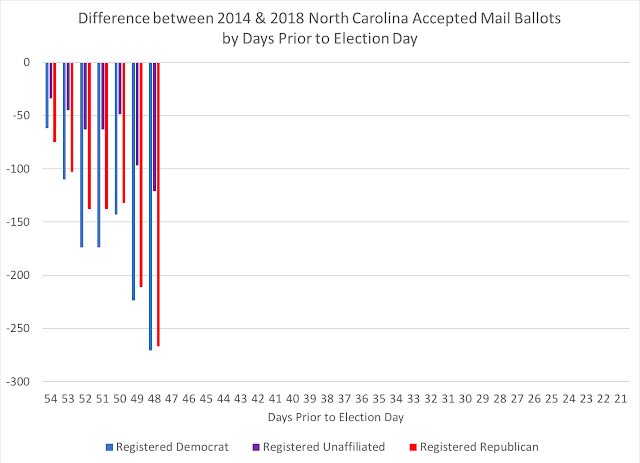 Finally, I matched the current group of voters requesting mail ballots this year with data from the 2014 election, particularly with an interest in whether the current voters cast a ballot in 2014 or not, and if they did vote, what voting method did they use: 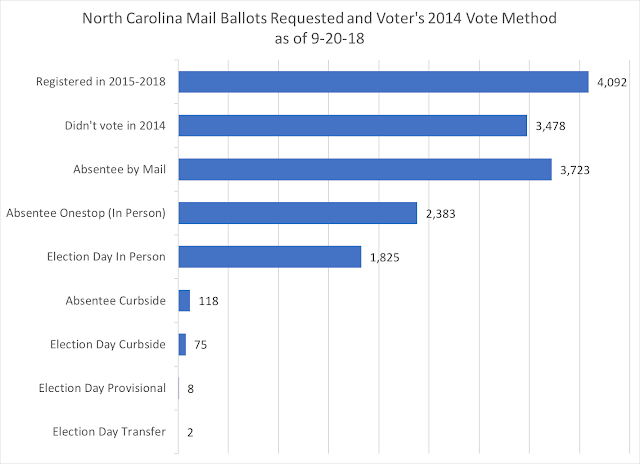 And then broke the top five numbers down by party registration: 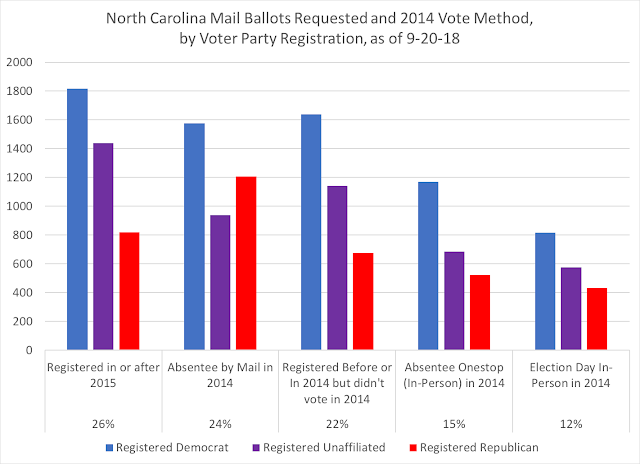 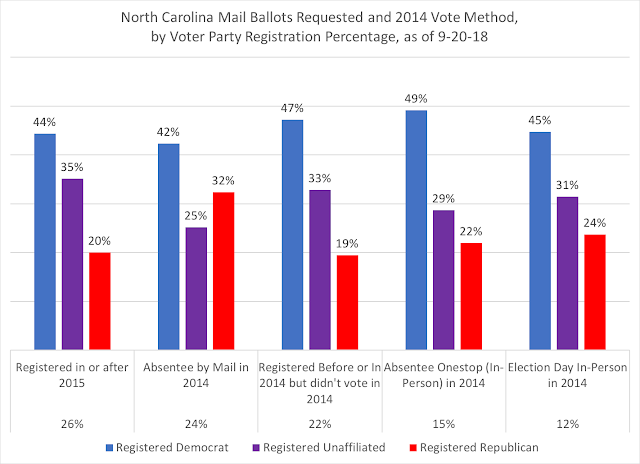 With over two in ten voters not voting in 2014 but having requested a mail ballot this year, it will be interesting to watch this dynamic over time, especially when in-person early voting begins in October.

I'll be posting more graphs on my twitter handle (@OldNorthStPol or @BowTiePolitics) and will likely to a weekly update on Saturdays of mail ballots, with a daily update once in-person absentee voting begins.