A Deeper Look into NC's 9th Democratic Primary: Was There Reverse Drop-Off in Some Counties?

Today's post-primary blog piece raised some interesting questions, especially regarding the differences between the highly-competitive and charged Republican primary between Robert Pittenger and Mark Harris and what turned out to be a lop-sided Democratic primary between Dan McCready and Christian Cano in the Old North State's 9th Congressional District.

Below is the map of the 9th and the counties in it: 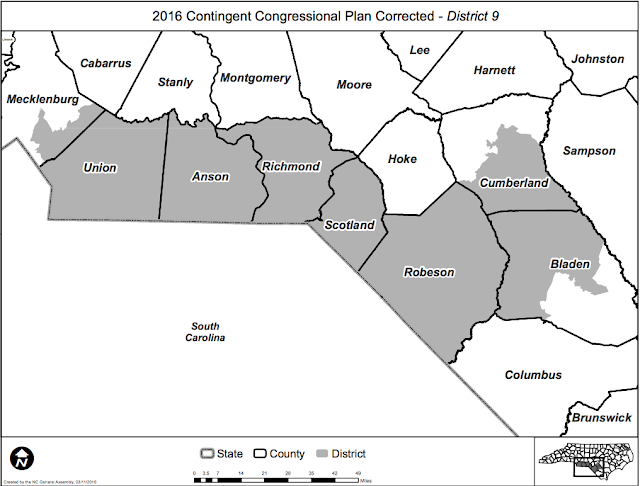 Five counties--Union, Anson, Richmond, Scotland, and Robeson--are completely within the district. In trying to look into the question of why did Democrats have more votes cast than Republicans in the 9th, it may be helpful to look at what was going on within these counties to see what might be driving the numbers.

First, voter turnout varied widely by the counties within the district, especially when compared to the state-wide voter turnout of 14.27%:


Of the counties with turnout rates above the state turnout rate (Robeson, Bladen, Scotland, Richmond, and Anson), three counties are wholly contained in the 9th and had Democratic sheriff primaries: Anson, Robeson, and Scotland (for non-southerners, sheriffs can be a highly sought-after and historically powerful local official in the South). Another county, Bladen County, had a Democratic sheriff primary race, but that county is split between the 7th and 9th districts, while Mecklenburg County is divided between two congressional districts (the 9th and 12th) and had a Democratic sheriff's race. Union County did not have a Democratic contest for sheriff.

Within the three counties that had the highest voter turnout in the 9th, could one see a difference or similarity between the Democratic congressional race and sheriff's races? Here are the comparison (unofficial) vote totals for the Democratic primaries for Congress and sheriff in Anson, Robeson, and Scotland counties:

When a contest with a higher number of votes is compared to another contest with a lower total number of votes on the same ballot, there is said to be "drop off" or "roll off" from one contest to the other, typically moving from top to bottom of the ballot. The most common example of drop off is when the U.S. presidential race is at the "top" of the ballot and garners the most total votes cast, while the subsequent 'down-ballot' races tend to see fewer votes cast due to voter drop-off/roll-off, often attributed to lack of voter interest or knowledge. And even though the congressional primaries were at the "top" of this primary ballot, with the sheriffs' races down the ballot, it appears that in some counties on the Democratic side, the reverse happened: the sheriff's race attracted the most attention, with the congressional election getting second ballot billing by the voters.

In comparison, one of the other 9th district counties that had a Democratic sheriff's primary contest--Mecklenburg--saw an almost equal sum total in the precincts that had both the sheriff's race (10,769 votes) and the 9th district race (10,788 votes) (a note: in Mecklenburg, the 2nd precinct is split between the 9th and 12th districts, so I excluded both the congressional vote and sheriff vote from this comparison of the vote totals).

In thinking about the Democratic contests in the 9th Congressional District, one could consider that the competitiveness of, and voters' interests in, several sheriff's races may have provided a boast in numbers to the McCready-Cano contest. Of the 45,660 votes cast in the district for the two congressional Democrats, 48.8 percent, or 22,317 votes, came out of Anson, Robeson, and Scotland counties combined. The sheriff's races in these rural counties may have driven the votes to congressional race, and thus a perception of enthusiasm and energy, in the Democratic primary for the district as a whole.
By OldNorthStatePolitics.com - May 09, 2018