Having taught two courses this semester, one on State and Local Politics and the other on Presidential Politics, I came to the end of the semester with some thoughts that may intersect between the two topics: one about presidential "cycles," another about the demographic changes going on in our nation and in the Old North State, and the political polarization that we continue to experience. Based on a recent guest lecture to a civic group in Charlotte that brought these thoughts together, I thought I would share these ideas.


In my remarks, I first gave a sense of what we may be seeing in terms of a "presidential cycle" that could impact our political environment in the not-too-distant future. This cycle may be influenced by my second point, the tectonic shift caused by generational cohorts with very different views. Finally, I ended the talk with a sense of how, even with the possible end of a presidential cycle due to the on-going generational shift, the idea of polarization will like stay with us for some time.


FDR can be considered as someone who sought to reinvent the relationship between government and its citizens in dealing with the Great Depression, and heralded a new governing coalition under the broad parameters of the new Democratic Party. This reconstruction of a new presidential cycle ultimately leads to the creation of a new political dynamic and era in American politics.

Following the reconstruction of the political environment is a president who brings about the politics of "articulation":


In the New Deal presidential cycle, LBJ is identified as the "articulation" president, who faced not just the apex of the New Deal majorities, but also began the descent from Democratic dominance in electoral politics of the nation, due to the divisions within the Democratic Party between liberals and conservative Southerners, who were realigning into the Republican Party.

Each cycle will usually see presidents from the opposition elected, what Skowronek labels as "preemptive" presidents:


Both Eisenhower & Nixon are seen as preemptive presidents during the New Deal presidential cycle. What's interesting is that Nixon's presidency (mired in controversy, certainly) appears to herald the next cycle and the coalition that a reconstructive president will be put together: starting with fiscal conservatives, Nixon brings in the national security conservatives brought into the Republican Party by Goldwater in 1964 and southern Conservatives lead by the Southern Strategy and Strom Thurmond's party switch.

Finally, the presidential cycle ends with the politics of "disjunction," based on a president who:

Jimmy Carter's presidency is seen as the end point of the New Deal presidential cycle, with the following president heralding in a reconstructive presidency and a new cycle: Ronald Reagan.

With his call of "government is not the solution to our problems, government is the problem," Reagan brought about a new governing coalition and philosophy that repudiates the New Deal and brings about the above reconstructive principles into American politics and government. In addition, Reagan built on Nixon's electoral foundations with the completion (by at least 1984 and Reagan's re-election bid) of the South and social conservatives, especially white evangelical Christians.

This coalition becomes the dominant governing coalition and could be considered at its apex with the articulation presidency of George W. Bush, especially due to the role of social conservatives and white evangelical Christians.

The presidencies of Clinton and Obama seem to demonstrate the qualities of pre-emptive politics, especially with Clinton's triangulation of centrist politics and policies while acknowledging the "era of big government is over." For Obama, like with Nixon, the beginnings of a new reconstructive phase seems to be developing with a critical electoral component that I'll cover shortly.

The final presidency of a cycle is based on a president who believes "he, and he alone, can fix the issues" confronting the nation. President Trump has indicated that he can only fix the situation confronting the nation. The other aspects of a disjunctive presidency, especially the tenuous relationship with his own party's establishment, seem very prevalent for what has been experienced in the first year of the Trump presidency.

So, if one was to draw the New Deal and Reagan presidential cycles out, it might look something like this:

If the Reagan cycle is coming to an end, it could be due to the other major stream in our politics and my second key point: the tectonic shift within our electorate and society based on generations.

The Pew Research Center has amassed a significant amount of research on generations, and here are some examples of what we are seeing with the Millennial generation--first, the generational impact on the workforce: 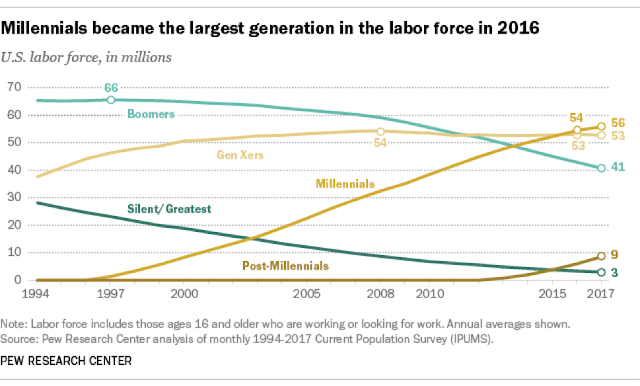 In addition, the Manpower Group estimates that by 2020—that’s only 2 years from now—Millennials will make up 35% of the global workforce.

It’s not just in the workforce, but in the U.S. electorate that Millennials are going to have an impact. 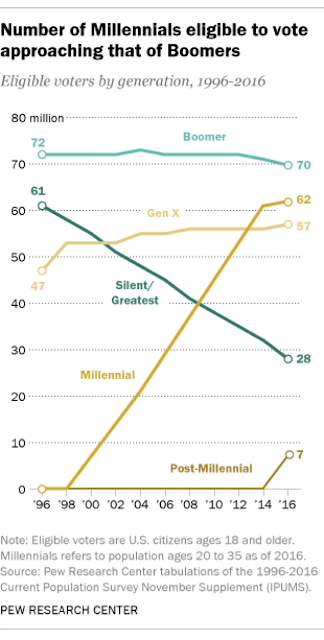 In fact, if you combine Millennials with Generation X, the 2016 electorate has already seen the shift away from Baby Boomer dominance. The missing factor is turnout with the Millennial generation. 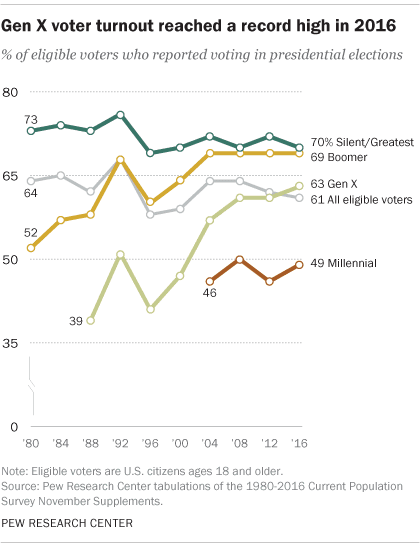 In North Carolina, one can see this trend mirrored in generational turnout by registered voter cohorts, based on research I have conducted of the past few electorates: 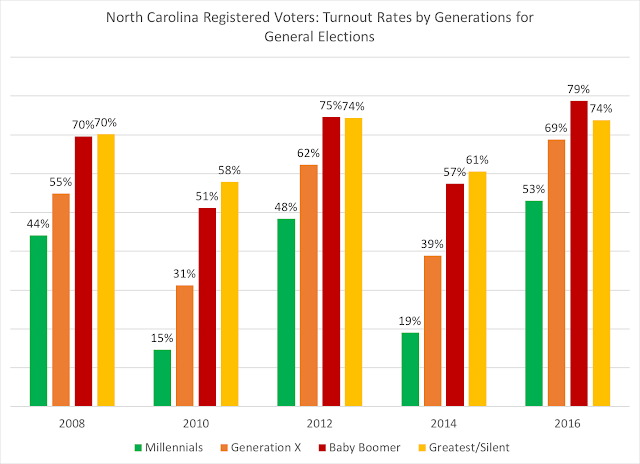 With the 2020 election just around the corner, it is likely that Baby Boomers will have share the same percentage of the eligible electorate as Millennials.  But Millennials have taken a significantly different approach to partisan self-identification: 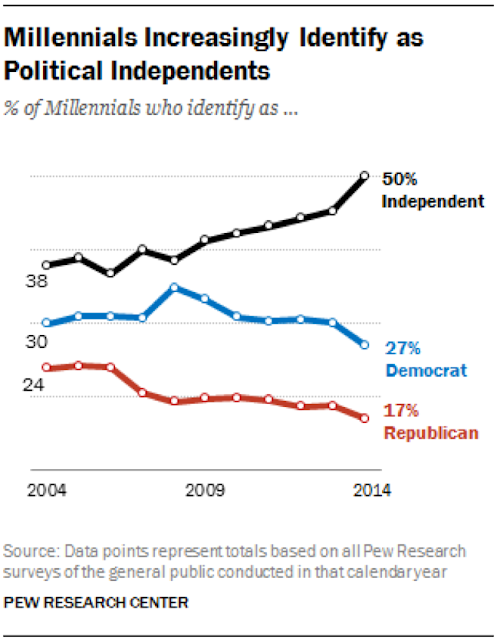 For comparison to the other generations: 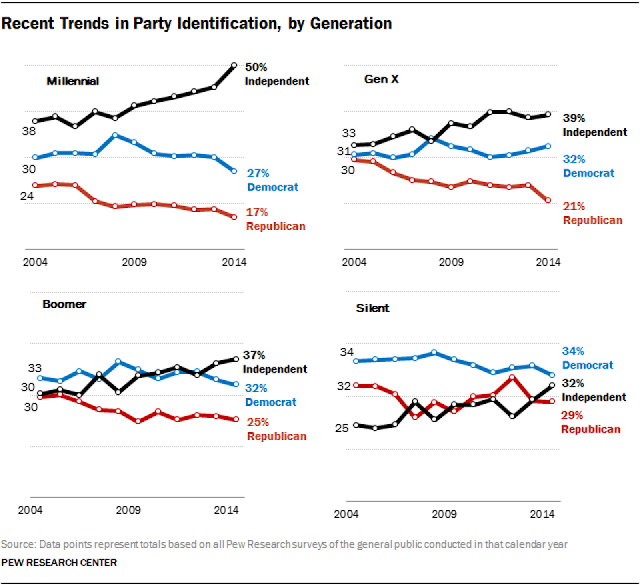 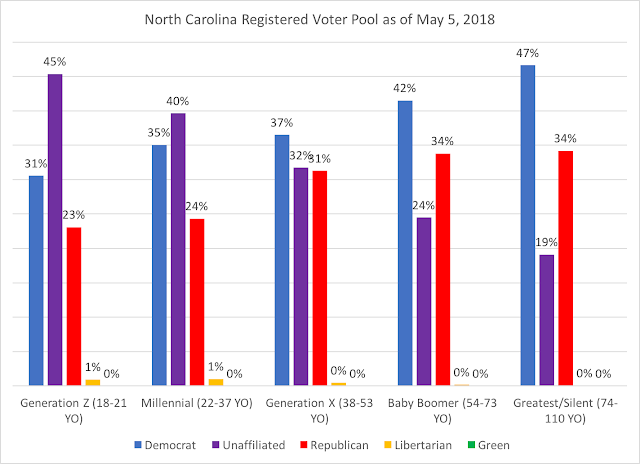 But does this self-identification as "independent" and "unaffiliated" registration really mean that these voters are truly "independent"? Pew provides insight into this aspect of whether these independents "lean" to one party over the other: 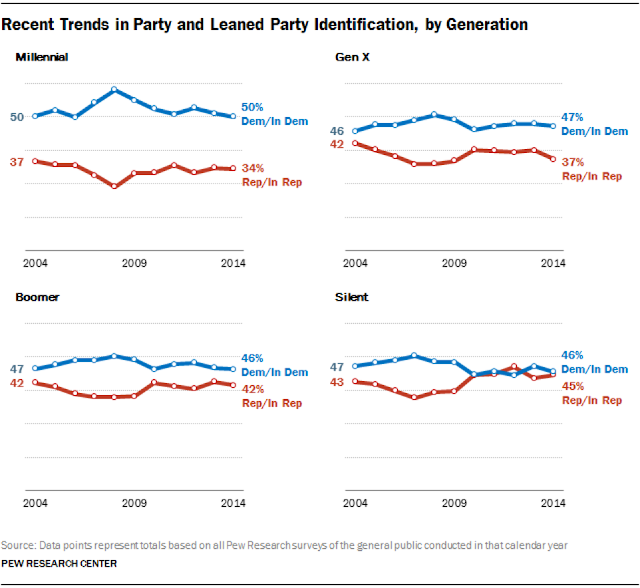 So, if Millennials are substantially more Democratic in partisan self-identification, how might their voting behavior reflect this? Pew's research on the "young/old" voting gap between 1972 and 2012 gives some insight: 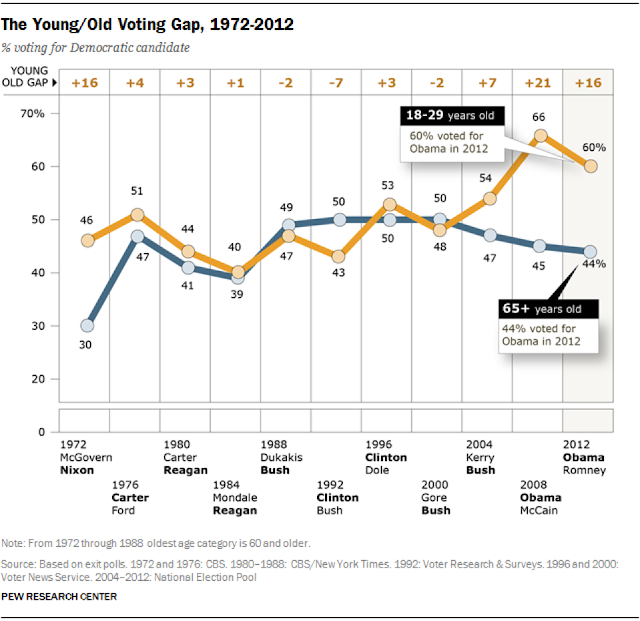 Since 2000 nearly equal match between voters 18-29 and over 65 years old, the gap has been widening, with Millennials coming of voting age eligibility in 1998 and continuing to increase their presence in the electorate.

Another facet that gives some credence to Millennials being more Democratic are their views of both parties: 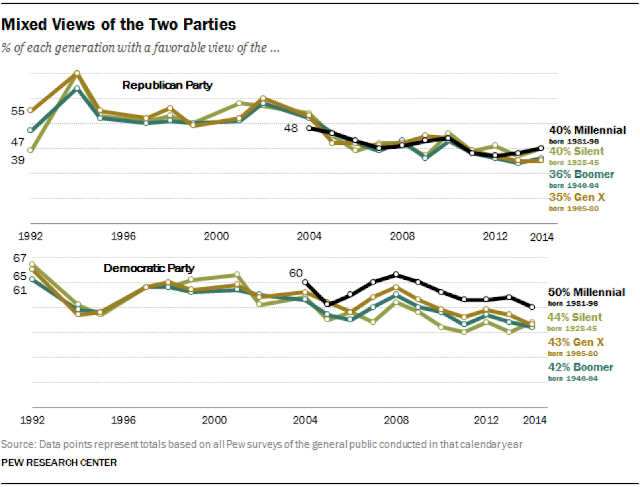 Another aspect of the difference among Millennials is their ideological perspective, in comparison to other generations: 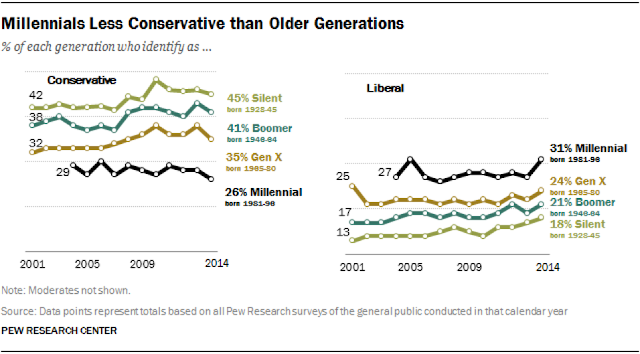 From the 2016's American National Election Study, the ideological composition of the electorate (those respondents who indicated an ideological perspective of liberal, moderate/middle-of-the-road, or conservative) shows differences among generations as well: 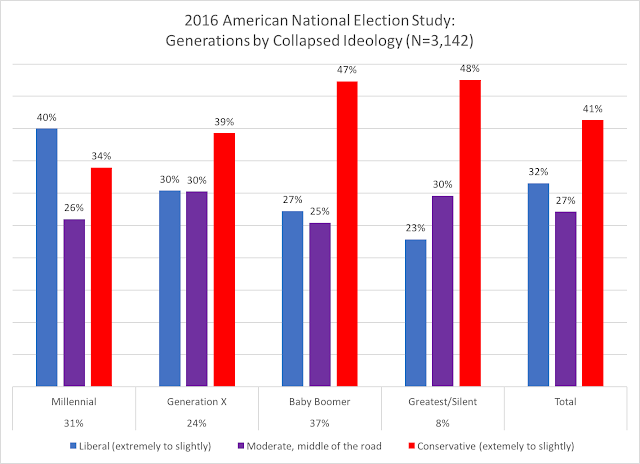 In looking at various social issues between the generations, it is obvious that there is a demarcation line between a more liberal-oriented Millennial generation and other cohorts: 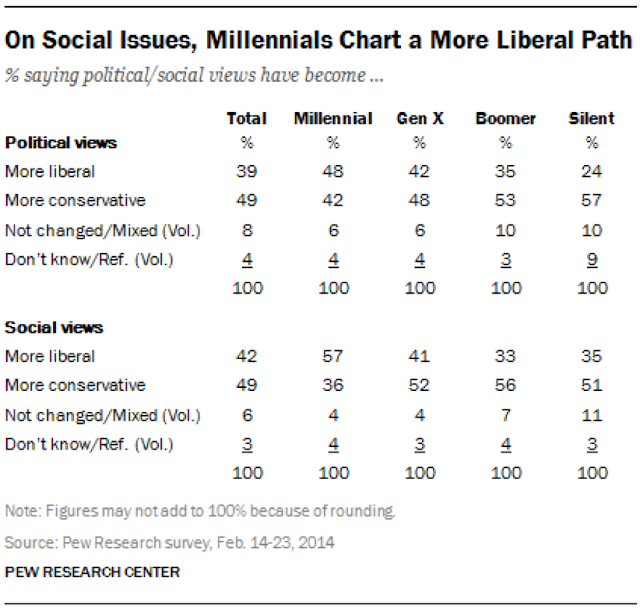 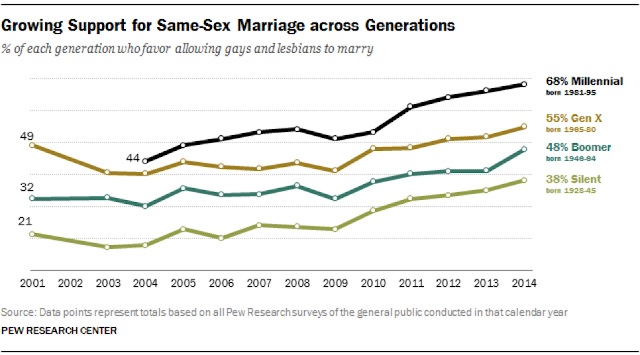 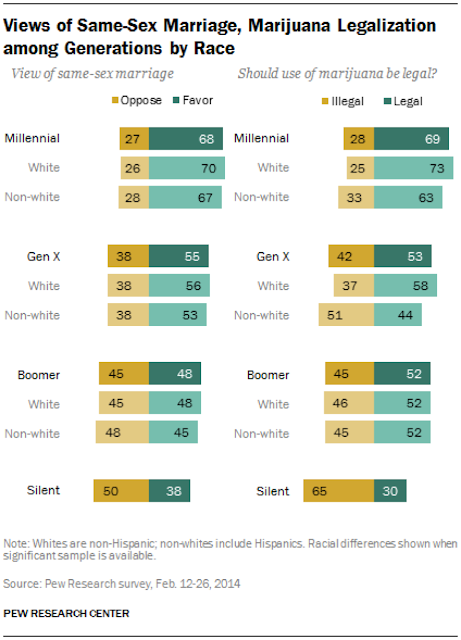 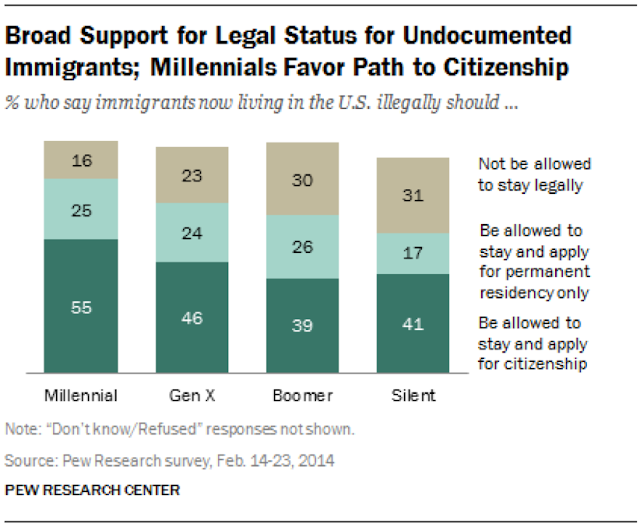 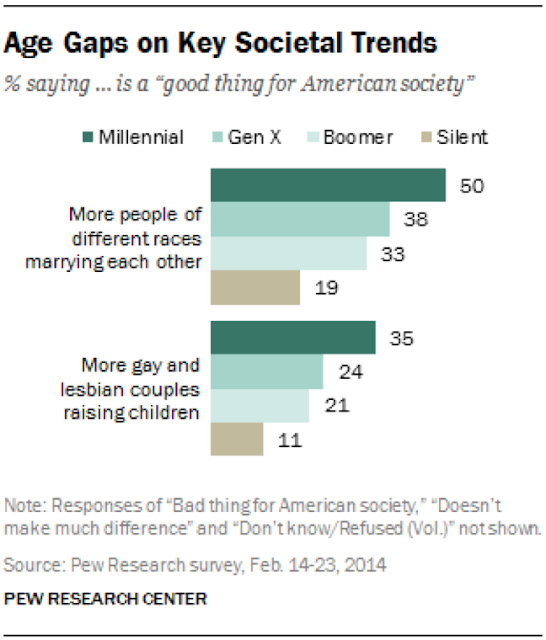 Finally, when comparing generations, a noticeable shift occurs with Millennials that may offer the rebuke of Reagan's "government is the problem" belief: 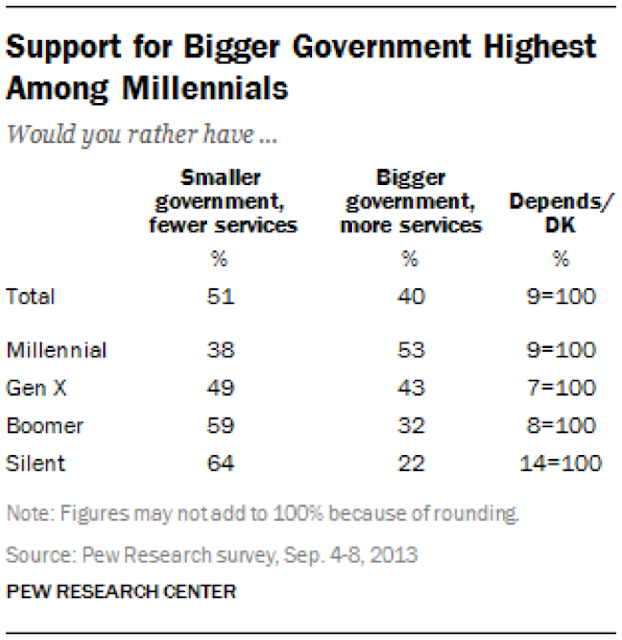 While 59 percent of Boomers believe in Reagan's philosophy of smaller government, a majority of Millennials--53 percent--believe in the idea of bigger government that provides more services.

Taking the above perspectives on Millennials, I believe that it would be easy to see the combination of Millennials coming into their own political right, married with the dynamics of a possible disjunctive presidency, to bring about a new presidential cycle and a reconstructive presidency in the very near future.

However, this doesn't mean that partisan loyalty, or what we might describe as part of the political “polarization,” doesn’t go away with the change in generations or a potential change in the presidential cycle. 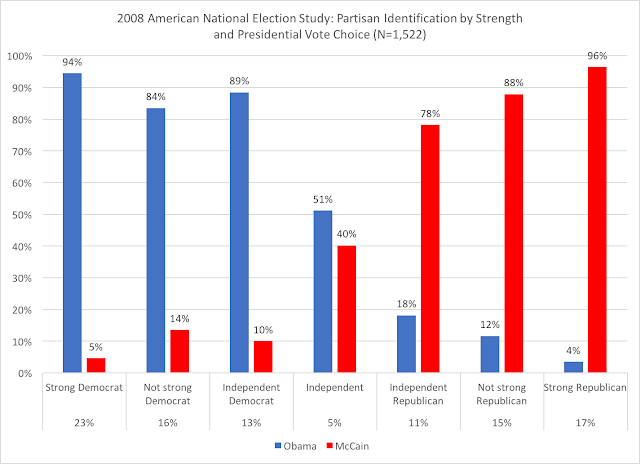 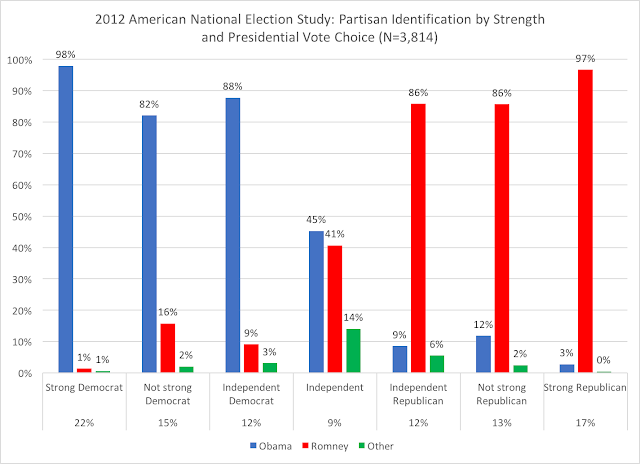 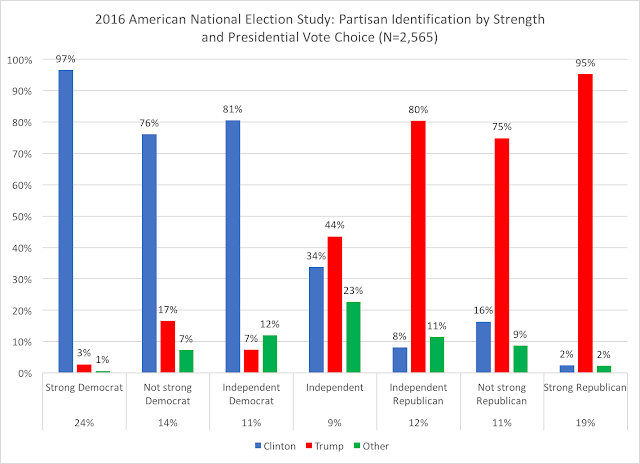 As shown in the above three charts, party loyalty is a pronounced factor in presidential vote choice, with pure independents splitting their vote, but typically being 10 percent or less of the electorate. To summarize the 2016 election:

In looking by generations, one can see the distinctiveness of partisan loyalty as well, based again on American National Election Studies data from 2016 and taking the self-identification partisanship and grouping the strong partisans, not-very-strong, and leaners together:

Baby Boomers, who went 49% Trump to 46% Clinton and were 46% self-identified Democrats, 46% Republican, and 8% pure independent: 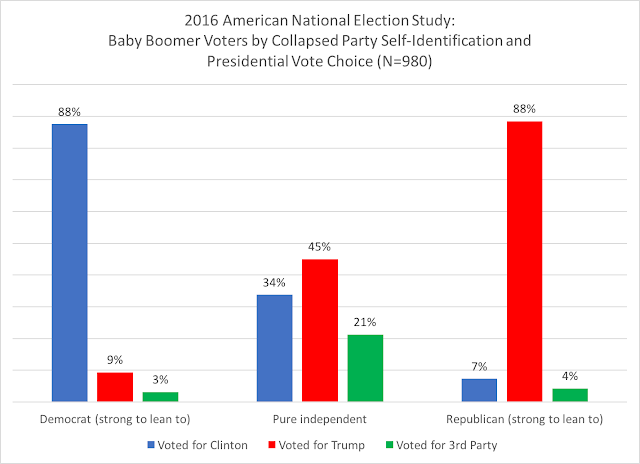 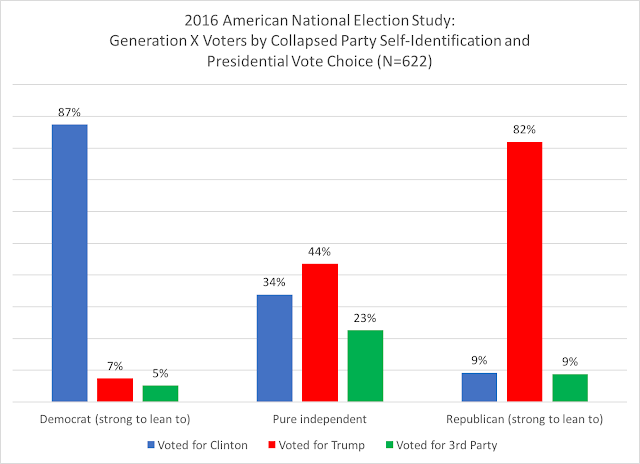 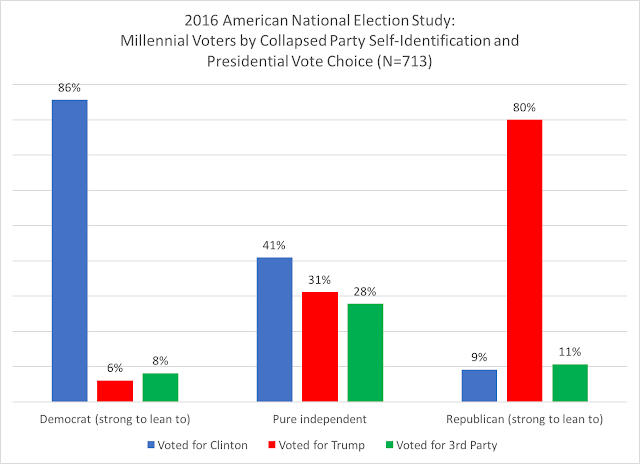 So what is my thinking at the end of this semester and blog post? Well, if the Reagan presidential cycle is indeed coming to an end, a new reconstructive presidency may be on the cusp of coming into being if Millennials begin their transformation of the electorate, and the political pendulum swings to the political left. But what appears more evident is the fact that polarizing partisanship will not change anytime soon.

This summer I'm doing a lot of reading on polarization in the United States, with the intent of teaching a special topics course called "Polarization in American Politics" next academic year. Another post will focus on some of the readings that I'm doing, but one that I am particularly struck by so far is James E. Campbell's Polarized: Making Sense of a Divided America. I would highly recommend it, for both the expert and the lay reader.
By OldNorthStatePolitics.com - May 19, 2018