With two full weeks now completed in North Carolina's absentee by mail voting, over 64,500 voters have requested ballots to cast in this year's general election, with 10 percent of ballots (6,534) being returned and accepted for counting come November 8.

Here are the latest figures from Saturday's report (9-24-16) of mail-in absentee ballots requested and returned by party registration, with the various review of them (the most important line is the "ACCEPTED" line) at this point. 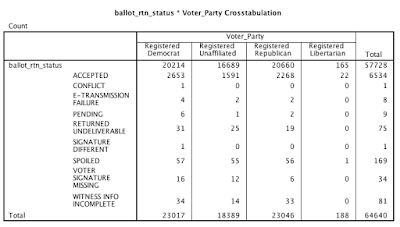 In looking at the trend lines by party registration of accepted mail-in ballots so far: 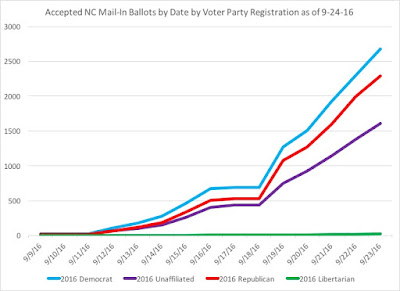 As of 9-24-16, registered Democrats are 41 percent of the returned accepted mail-in ballots, registered Republicans are 35 percent, and registered unaffiliated are 24 percent.

In comparing the same day in 2012 to 2016, the continuation of returned and accepted mail-in ballots from registered Democrats are still bucking the trend from four years ago: 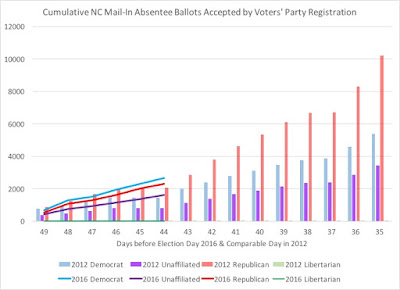 In comparison to the same day four years ago*, the total number of returned accepted ballots is at 153 percent, with registered Democrats at 184 percent, registered unaffiliated at 202 percent, and registered Republicans at 111 percent of where they were the same day in 2012.

Of the outstanding ballots, the party registration is: 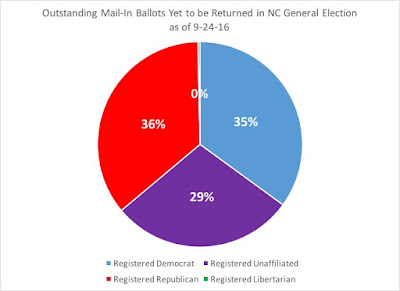 I decided to run analysis on three other areas of interest of mine: by generations, by region (meaning, urban vs. suburban vs. rural counties), and native North Carolinians versus those voters born out of state.

In terms of generational cohorts, we would expect older voters (those who are Baby Boomers (born between 1945-64) and those of the Silent & Greatest generations (those born before 1945)) to be the largest users of mail-in absentee balloting, as opposed to Generation Xers (those born between 1965-1980) and Millennials (those born after 1981). And indeed, we see this expectation play out in NC's mail-in absentee ballots, with two-thirds from voters who are either Baby Boomer or those of the Silent/Greatest generations. 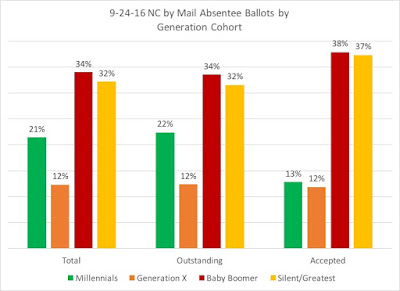 To put this into some context, Silent/Greatest generation voters are 12 percent of the overall registration pool, Baby Boomers are 32 percent, Gen Xers are 27 percent, and Millennials are 29 percent (as of 9-24-16). 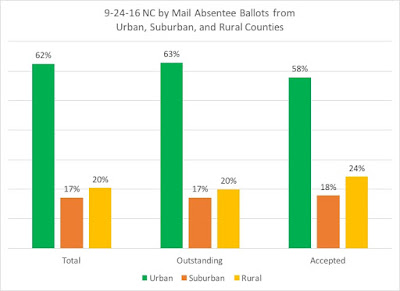 Finally, the differences between native NC's and those born outside of NC is pretty striking: 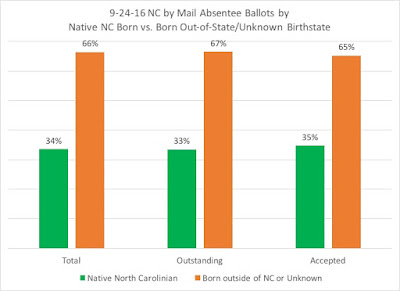 Among all registered voters, native North Carolinians make up 43 percent of the voter pool, but among all requested mail-in ballots so far, non-native voters are two-thirds of the ballots.

*due to 2012's general election being two days ahead of where 2016's general election falls, I made a slight recalculation to account for this discrepancy in this comparison from previous analysis.
By OldNorthStatePolitics.com - September 25, 2016