With Stein Officially In for NC Governor, Can He Replicate Cooper's Success?

With the official announcement by North Carolina's Democratic Attorney General Josh Stein of seeking the state's chief executive office, comparisons are being made to the current incumbent's performance and how Stein can replicate those two successful runs for governor.

In 2016 and 2020, Democrat Roy Cooper was able to unseat an incumbent governor (49 percent against Republican Pat McCrory's 48 percent) and successful defend (with some breathing room at 51.5 percent) his re-election against Republican Lt. Governor Dan Forest. In those same elections, Stein was able to secure the AG's office, but in 2020, he did so with the barest of margins of victory of any Council of State executive officer winning (50.13 percent). In 2016, Stein won his first bid with 50.3 percent of the vote.

As Miles Coleman has noted, North Carolina's gubernatorial election will be one of the few in the nation in the presidential election, and will be the "marquee" contest. Sabato's Crystal Ball has already classified the contest as a 'toss-up.'

Much has been made about whether Stein can, and strategically will follow Cooper's approach to vote collecting in the November 2024 general election. In looking at both candidate's performances in 2020's election, we can get a sense of where things could be crucial in Stein's potential replication of Cooper's win, or perhaps take a slightly different strategic approach.

As a highly competitive state, North Carolina state-wide elections tend to fall in the range of winners getting 50 to 53 percent: the most popular state-wide executive candidate in 2020 was Republican Steve Troxler, who got just under 54 percent in his re-election as Commissioner of Agriculture. But the competitive and divisive nature of state-wide politics is masked by the regional alignments for both parties, as evident in the following chart comparing Cooper to Stein.

In dividing the state into four distinct regions--the central cities, the urban suburbs, the surrounding suburban counties, and the rural counties--the partisan differences in three out of the four regions is clearly evident.

The central cities--Charlotte, Raleigh, Asheville, Winston-Salem, Greensboro, Durham, and the like--are Democratic dominant in our current environment. A typical 70-30 split between Democrats and Republican is the norm, with Stein meeting that norm and Cooper exceeding by three percentage points.

Conversely, Republicans rule in the surrounding suburban counties to those urban counties: normally, those counties go anywhere from 63 to 65 percent Republican, though in 2020 Forest barely got over 60 percent of their vote. The other major GOP region are rural counties, though the Republican influence is muted by several majority-minority counties in the eastern part of the state that help keep Democrats typically at 40 percent out of that region.

As I've previously noted in other posts, North Carolina's most competitive region are the urban suburbs: those areas outside of the central city limits, but inside the urban county. In 2016's presidential election, Hillary Clinton tied Donald Trump at 50-50, while four years later, Trump expanded the GOP hold in that area to 53 percent. But Cooper managed to keep the Democratic losses at only 2 points, while Stein saw a typical loss in that area of 53-47 to Republican Jim O'Neill.

As is want to say, past performance isn't necessarily indicative of future possibilities, but in North Carolina's now rigid and calcified voting patterns, it's a good bet of how things will play out. The combined Republican vote percentages of 2020's US president, US Senate, and NC governor's election results in the 100 counties explained 98 percent of Republican Ted Budd's US Senate win two years later in 2022: 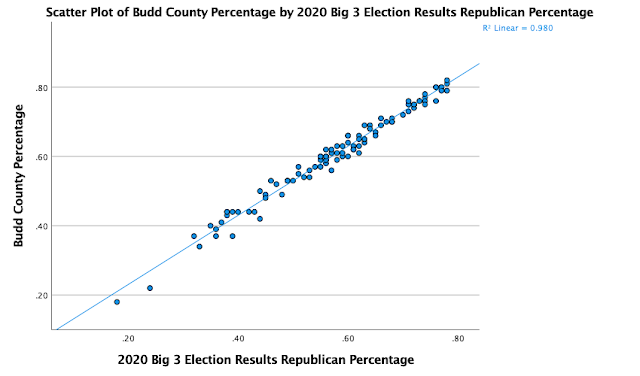 Of course, the thing that may be different in 2024 that we can't predict now (sorry) is 'who shows up' in November. And that is something certainly both parties can, and should, be focused on now to lay the groundwork for the battle royale that will be the gubernatorial showdown.

We may have seen the early indication of Stein's strategy in his announcement video: he clearly wants to define what he perceives to be his likely general campaign opponent, Lt. Governor Mark Robinson, as extreme and outside the policy mainstream middle of the state's politics.

And by highlighting Robinson's rhetoric, the likely target audience are those in the competitive urban suburbs. Keeping that region competitive, maybe peeling off some surrounding suburban county votes, and boasting Democratic voters in the central cities, could be seen as the potential pathway to another 'skin of your teeth' victory. But the warning signs are also very evident, as demonstrated by key turnout misses in the Democrat's 2022 US Senate campaign.

We're now all awaiting the second shoe to drop in this gubernatorial slug-fest: Robinson's anticipated response and announcement of his candidacy, along with any other potential candidate to throw their hats into the ring.