Who Showed Up in May's Primary Election?

With the data finalized from the 100 counties and available via the NC State Board of Elections, we can now parse through who showed up to vote based on a number of factors. As reported in the Raleigh News and Observer recently, May's primary electorate had only two out of ten NC registered voters participate. But with the counties reporting their voter history data to the NC State Board of Elections and using the May 21 voter registration data file, we can see who showed up for May's primary. This blog post will look a variety of factors, specifically highlighting more detailed information based voter party registration, generational dynamics, and the location and type of precincts voters casting May primary ballots came from. 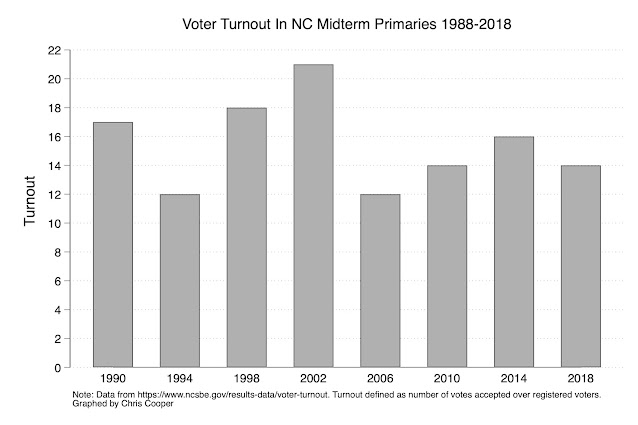 Partisan Representation in the Primaries

Between the two major parties, Republicans saw over 780,000 ballots cast (55 percent of the total ballots cast) compared to Democrats with over 640,000 ballots (45 percent). This shouldn't be a surprise, given the top-of-the-ballot on the GOP side featured what many thought was a competitive U.S. Senate nomination battle (which turned out it wasn't). 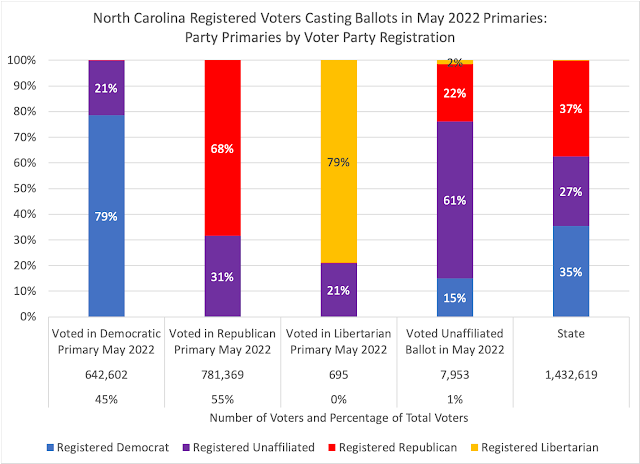 Between the two party primaries, Unaffiliated voters gravitated to the competitive party and cast more ballots in the GOP primary, going 63 percent Republican to 35 percent Democratic. Among registered partisan voters, the number of Republicans (537,083) slightly edged out Democrats (506,426).

What about these Unaffiliated party primary voters?

One area of interest regarding Unaffiliated voters are those who show up to vote in party primaries and their voting "habit," or behavior, when it comes to pulling a party ballot. With voter history data from the 2018 and 2020 primary elections, we can see the universe of those Unaffiliated voters who voted in all three primary elections and their habits when it comes to voting in the primaries.

First, I constructed a series of classifications for the Unaffiliateds who voted in all three of the past primaries, based their voting habits:

If an Unaffiliated voted in all three Democratic or Republican primaries, then they would appear to be a consistent Democratic or Republican primary voter. A variety of explanations could be explain this behavior, such as whether they are just a "masked partisan" by choosing the Unaffiliated registration but are partisan voters, or whether they live in a solidly partisan area, thus the only real choice is voting in one party's primary over the other.

A third type of Unaffiliated primary voter could be the party convert, or party switcher: going from one party in 2018 to the other party in 2020 and 2022 might indicate that the voter simply aligned with the new party more so than they did in 2018.

Finally, we have 'floaters,' or perhaps 'party wanderers': a combination of the three party primaries (coding #3 and #7) that really makes no rhyme or reason (especially coding #3), unless there are local conditions or issues at play for that voter.

The key test would be the numbers of Unaffiliated voters falling into each category. In looking at the May 21, 2022 voter registration file, slightly over 120,000 registered Unaffiliateds cast ballots in all three primary elections, and the division broke down into a very distinct portrait of these Unaffiliateds. 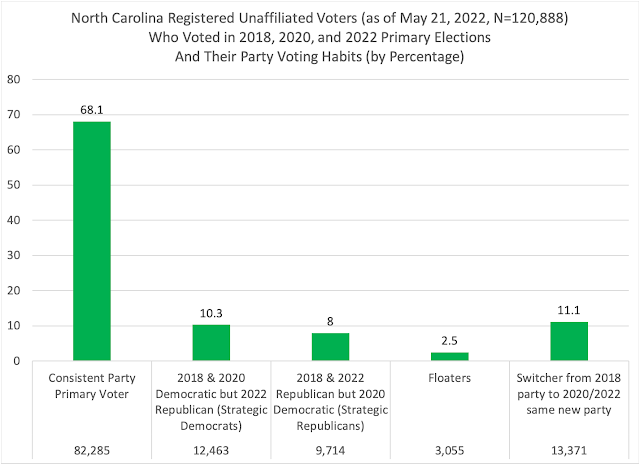 Over two-thirds (68 percent) of the 2018 to 2022 Unaffiliated primary voters voted consistently in one party primary over the other (this combines both Democratic and Republican primaries). The remaining Unaffiliated voters were either strategic party voters (a combined 18 percent voted in two of the same party primaries but went to the other party one year for a competitive contest) or were simply party switchers (11 percent who voted in one party in 2018 but then voted twice in the other party in 2020 and 2022). The 'floaters' or party wanderers were less than 3 percent.

More study is needed on North Carolina's Unaffiliated voter pool and their voting habits, but this early analysis could give us a better sense of what kind of voters Unaffiliateds are: if they are showing up consistently for primary elections, then these voters would be seen as some kind of engaged partisans. And if they are consistently voting in the same party, then are they really 'unaffiliated' from partisanship?

Not surprisingly, May 2022's primary demographics showed real divides within race/ethnicity, gender, generations, and voter locations of those who cast ballots. 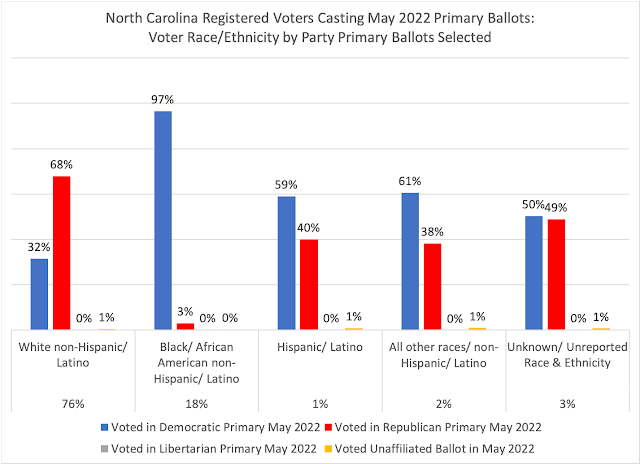 Women were evenly divided between the two primaries, while men went overwhelmingly for the Republican primary ballot (61 percent). However, more women showed up in total (55 percent) to men (45 percent).

In looking at each generation cohort and which party they voted in, there's again a distinct young versus older divide. Voters over 42 went overwhelmingly Republican (Gen X, Boomer, and Silent), while Millennials bucked the trend and went more Democratic in their primary ballots and the youngest generation (Gen Z) evenly split between the two parties. 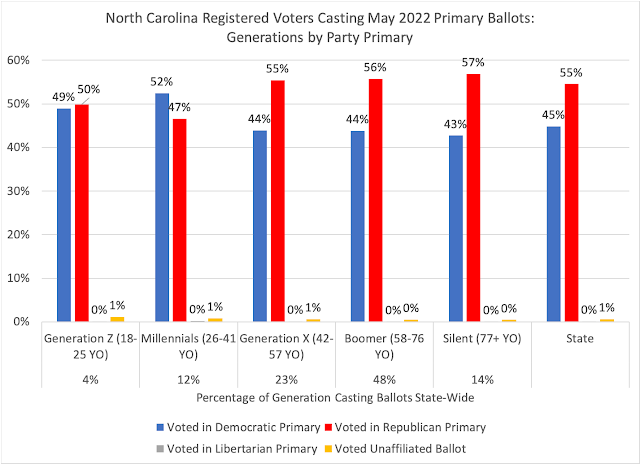 Finally, where the parties pulled their primary electorates from demonstrates some interesting patterns. First, in looking at North Carolina's 'regionalism' (urban central cities, urban suburbs, surrounding suburban counties, and rural counties), the composition of both party's primary electorates and where each region went for both parties shows distinct divisions. 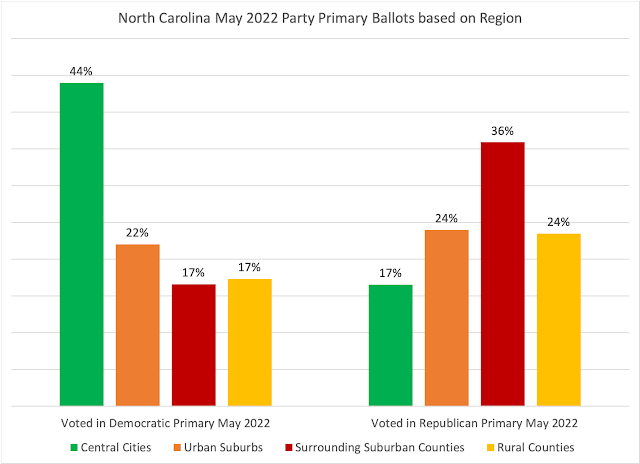 When looking at each region, again you see the distinctiveness of which party dominated in those four areas. 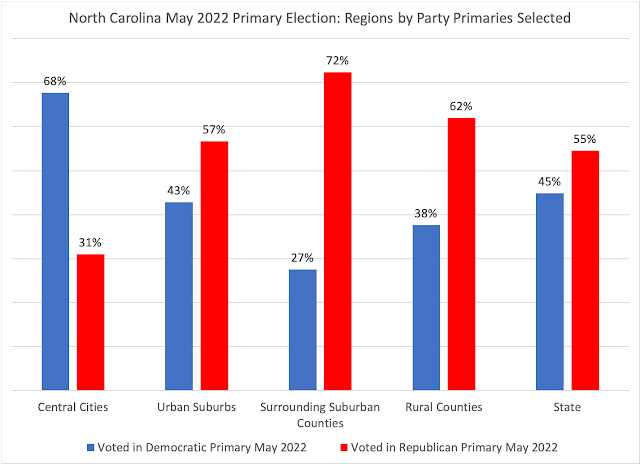 Not surprisingly, the most Republican regions were the surrounding suburban counties and rural counties, with the central cities being overwhelmingly Democratic. The most competitive region of the state--the urban suburbs--was slightly more Republican that the state as a whole.

One final 'location' analysis that has become of interest to me is the type of precinct that both parties pulled from for their primary electorates: namely, how polarized or competitive are the precincts where voters reside, and where did both parties garner their votes from among these competitive to polarized precincts.

In determining whether a precinct is 'competitive' or 'polarized,' I categorized each precinct as to the percentage for either Biden or Trump in three categories: 50-54 percent (competitive but lean to one party), 55-59 percent 'likely' for one party, or 60 percent and greater, a polarized precinct for one party. 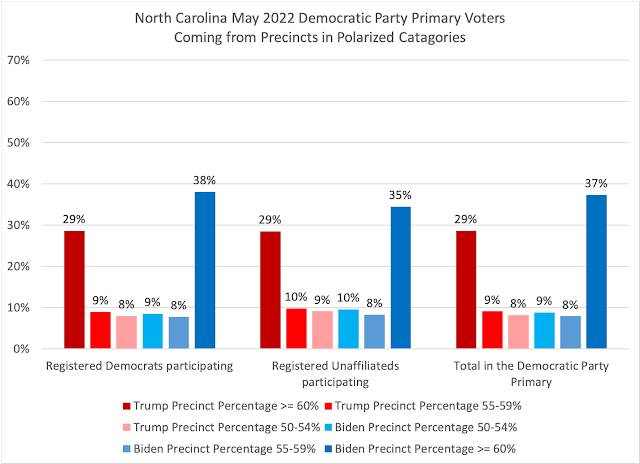 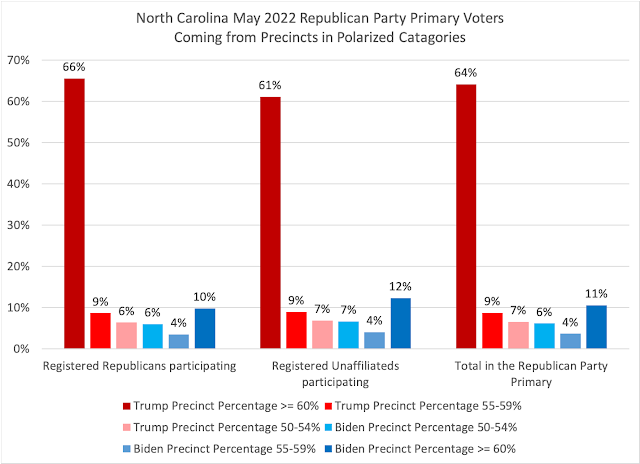 Two-thirds of registered Republicans, and over 60 percent of registered Unaffiliateds voting in the GOP primary, were in precincts that went overwhelmingly for Trump in 2020's presidential election, perhaps signaling that the Trump dominance of the GOP is very evident in the party's base of voters.

Primary elections tell us something about the voters and the state of our political parties respectively: when we talk about the 'party bases,' those who take the time to show up to vote in a primary election are likely the most committed to those parties or most energized in being a voter. Primary elections also can tell us demographically what the party's 'base' of voters says about that party. Both North Carolina parties continue to show distinctiveness in their party bases, and this sorting of different bases will likely continue for some time to come.

Dr. Michael Bitzer holds the Leonard Chair of Political Science and is a professor of politics and history at Catawba College. He recently authored the book Redistricting and Gerrymandering in North Carolina: Battle Lines in the Tar Heel State, and tweets at @BowTiePolitics.