How Far Can the Kudzu of Trumpism Cover North Carolina?

By Michael Bitzer
For those not from the South, kudzu is a vine that spreads itself far and wide, seemingly minute-by-minute, thanks to the region's heat and humidity. And yet it contains 'mythical' dynamics of a plant destined to eat the entire region.
Most of the 'lore' of the noxious vine is just that--a myth--even though most Southerners and those visiting the region have seen the telephone poles, barns, and trees consumed by the invasive green monster.
Yet beyond the actual plant, kudzu can take on metaphorical dimensions, within the right conditions, for an invasive and aggressive being that can devour whatever is in its path at lightening speed. It's not just the plant that one can see overtaking farmland, but what I'm seeing is a political version that has strong roots in the Old North State and is advancing quickly.
And like the plant, Trumpism's spread will likely not be contained until it covers all aspects of the Republican Party.
In news that has startled North Carolina politics, current U.S. Representative Madison Cawthorn announced that he was moving from his current home of the 11th (soon to become the 14th) congressional district to what will now be the new 13th congressional district.
Now, a slight digression: if you're confused over the congressional districts' numbering and territory, trust me: you are not alone. Having to learn not just the new turf that each district occupies, but the new numbering for each district...well, let's say, it's like Food Lion decided to move all the products on every aisle after five or ten years of leaving things where we know they are located.
The result: confused shoppers wandering around like a bunch of lost souls, exclaiming "where's the bread!" and "All I need is coffee--it was on Aisle 5, where is it now??" is probably what most North Carolinians, and especially voters, are feeling right now when it comes to which congressional and state legislative districts they reside in (or thought they did).
OK, maybe that was too much of a digression, but you get my point. So here's the "old aisle" and the "new aisle" congressional district maps, just to orient yourself (I still get lost trying to find things months after a grocery store moves things around--here endeth the digression).
The Current North Carolina Congressional Map ("the old aisles") 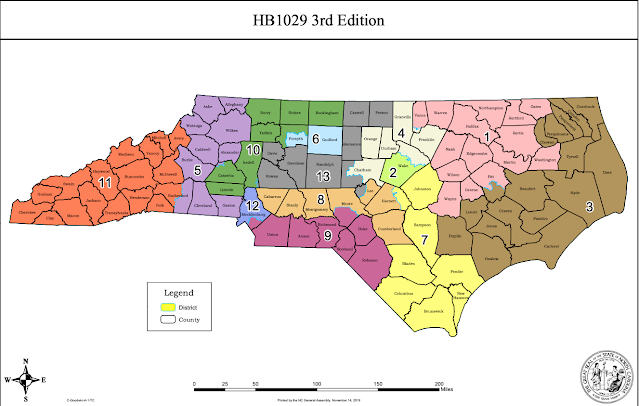 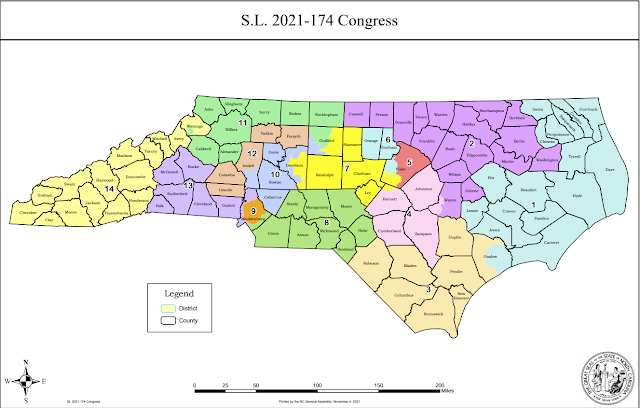 Back to the Cawthorn dynamic and his jump from the old 11th to the new 13th.
As a first-term representative, Cawthorn has been focused on making a real name for himself. After being shunned for the elusive Trump endorsement in 2020's first Republican primary contest, he beat the Trump-endorsee in a run-off second primary. Since winning the 2020 general election, Cawthorn has made sure his messaging is one that will be perfectly, if not conceivably more, Trumpian than the former president himself.
Just review his Twitter account and you will find his panache for stirring controversy and laying claim to populist outbursts. As my colleague Chris Cooper astutely wrote about after Cawthorn's jaunt to Johnston County:

Cawthorn’s social media branding also reinforces the notion that a trip to Johnston County, while not helpful to his NC-11 constituents, may play into larger, statewide political aspirations. His Twitter handle is “CawthornforNC,” not “CawthornforNC11” or “CawthornforWNC.” While this might be dismissed as a coincidence or a small detail that should be ignored, Cawthorn’s behavior and decision-making suggests that one thing he is unusually attuned to is branding. After all, he built his team around “comms, not legislation.”

But now it's not just about messaging; it's about solidifying and expanding Trumpism's hold on elected officials of the party. The original introduction of the noxious plant was "the healing touch of the miracle vine!", but now, Trumpism's vines are set on new territory, new turf primed for coverage.
As Cawthorn made clear in his announcement, "It is a move to take more ground for constitutional conservatism" and that "I’m afraid that another establishment, go-along-to-get-along Republican would prevail there. I will not let that happen."
And the simple fact is that the ground is fertile: two-thirds of Republicans believe that the 2020 election was stolen from the former president, and that means that adherents to Trumpism's kudzu need to ensure the 'plant' continues to march along, consuming territory and turf at a mile a minute.
One prime piece of territory is the 'new 13th', a congressional district that stretches from the GOP-friendly suburban precincts of Mecklenburg County, through the rich GOP lands of Gaston, Cleveland, and the mountain-bastions of Burke, McDowell, Polk, and Rutherford, where Cawthorn is likely to land.
Along with Cawthorn, two counties, McDowell and Polk, along with half of Rutherford County, will also make the change from the current 11th District to the new 13th.
And yet, almost dead-center in that rich till of Republicanism is Cleveland County and the current state house district of Speaker of the North Carolina State House, Tim Moore.
It shouldn't be any surprise that state legislators involved in drawing election districts are prone to "pick their own" district, or perhaps eyeing a favorable next-level up in public office (see then Democratic state legislator Brad Miller and the original 13th Congressional District back in 2001).
And even though Speaker Moore didn't chair or sit on the redistricting committee, enabling a Speaker, which is the most powerful member of the state house, to go from the state house to the U.S. House isn't much of a stretch of political imagination.
But that clear runway from Raleigh to Washington got covered by the Trump kudzu. And some would ask, how can a first-term member of the U.S. House scare off a long-time state representative and Speaker of the N.C. House?
Simple: Trumpism's kudzu. The vine of loyalty to the former president is deeply rooted in the base of the Republican Party--that is, the voters--with the tentacles extending into the party-as-an-organization and the last bastion of hold-outs, the party-in-government (candidates included).
Cawthorn's approach to governance--really more about the publicity and public attacks than legislating--has established himself as a core to the vine, and his reach into the new 13th is to solidify Trumpism's hold on those who would be Republican nominees.
The astonishment of the GOP 'establishment' could be best summarized in a tweet exchange between a long-time Republican--now registered unaffiliated--NC Supreme Court justice, who noted the potential of Cawthorn flipping district to challenge the NC Speaker, and the response by a leading Republican strategist: "What universe does this make sense in."
The universe is today's Republican Party, and the Trump kudzu has marched on to cover more and more of the party. And as noted about the plant version,

And because it looked as if it covered everything in sight, few people realized that the vine often fizzled out just behind that roadside screen of green. And that, perhaps, is the real danger of kudzu. Our obsession with the vine ... veils more serious threats to the countryside, ... or more destructive invasive plants ....

The political vine is growing. Its runners are ready to expand their reach. Maybe it should be asked, what's hiding behind the vine, lest the kudzu engulfs everything in its path.

Dr. Michael Bitzer holds the Leonard Chair of Political Science at Catawba College, where he is a professor of politics and history and author of the Redistricting and Gerrymandering in North Carolina: Battlelines in the Tar Heel State. He tweets at @BowTiePolitics.