Thursday, January 7 at 12:52 PM: I had written this blog post yesterday morning, on January 6, thinking that I would get it done before the joint Congressional session for the Electoral Count began, watch the proceedings unfold, and return to this piece this morning for one last glance and editing. Here's what I had as an original opening:

It's been an interesting start to the new year, or what some might describe (with everything going on) as '2020 version 2.1.'

Little did I realize what would transpire during the Electoral Count would fundamentally shake me to my core--as both a political scientist and historian and as an American citizen. But 24 hours later, with the physical illness feeling gone and in its place, a smoldering sense of professional and personal rage, I returned back to this blog piece to see if I had the stomach to hit "Publish" in the midst of everything else going on.

And I paused. Staring at the blinking cursor.

But then I realized: after everything that transpired, Congress went on its business last night. They reconvened after the insurrection had been removed from the Capitol, even amidst the destruction, disheveled desks and lecterns, and likely lingering tear gas. They proceeded to do their job, their constitutional duty and the responsibility they hold as elected officials under their oath of office.

And so should I, although nowhere near the importance that they had.

So, I posit the above as it may be a bit 'jarring' to the reader to then dive into my analysis of voter turnout rates and electoral composition. But as such, even with the continued constitutional crisis playing out as I type this sentence (and I realize that some may feel I am a bit hyperbolic in my word choices--trust me when I say, I am not), we must proceed on.

Therefore, taking the above original opening with a grain of salt following the past 24 hours, here's the analysis.

But for those of us who are data geeks, the end of 2020 finally brought some welcomed news. North Carolina's voter history data file is now updated with 5.5 million records from the 2020 general election, giving us the definitive insight into who showed up last November in the record breaking election.

For this post, I'll be looking at the turnout rates for various groups, based on the December 5, 2020 voter registration data file (allowing some counties to finalize voter registrations, but isolating those few voters who registered after early voting was completed). Out of the 7.4 million registered voters, 5.5 million cast a ballot, making North Carolina history with a 75 percent turnout rate in a presidential year in the past fifty years. 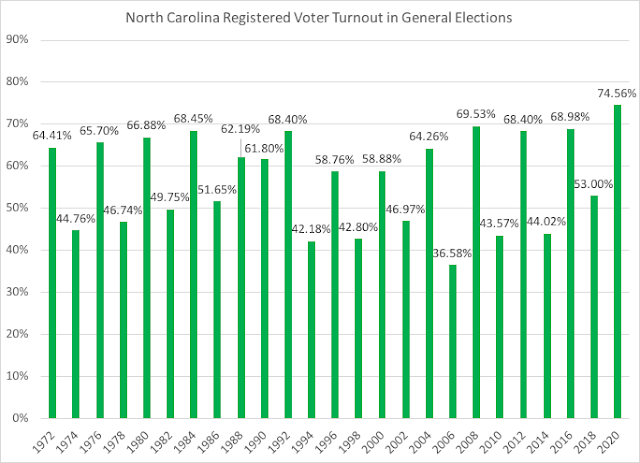 What most folks first look at is the turnout rates for the various party registrations: Democratic, Republican, Unaffiliated, and all other parties (Libertarian, Constitution, and Green). As has been the case (and for another blog post), registered Republicans had the highest turnout rate in the November 2020 general election. 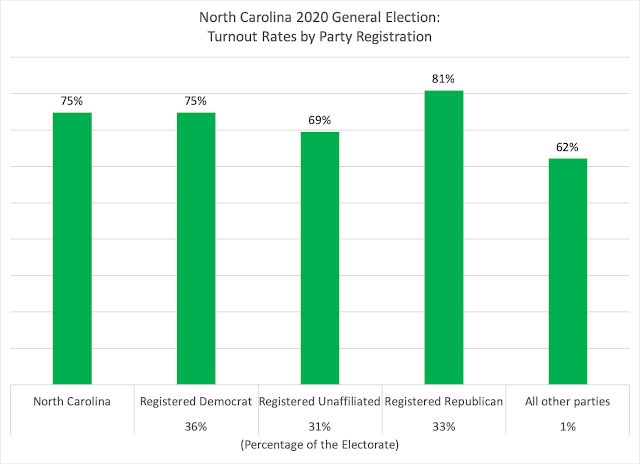 Yes, North Carolina has a history of voters who registered Democratic (because that's what daddy and granddaddy and great-granddaddy did) but in the privacy of the voting booth, vote Republican. But that bloc of registered Democratic voters is likely a generational phenomenon, along with being a native to the state and White (something that needs further study in this state). For voters who have recently registered, if they pick a party, they are likely identifying as a partisan voter.

As well documented here, the future great unknown are 'unknown' party affiliation, under the Unaffiliated status. The fact that not quite 70 percent of registered voters cast a ballot shouldn't necessarily surprise folks, because while they may be partisan in voting patterns, they are likely a less-engaged voter, as compared to today's registered partisans.

When looking at voter race/ethnicity, there are some stark turnout differences among the groups. 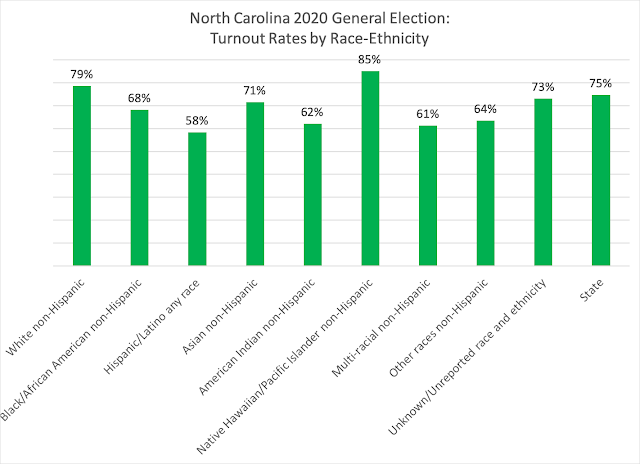 Among the other racial-ethnic groups, the 85 percent turnout among one group will certainly surprise folks. But the NC State Board of Elections just began listing Native Hawaiian/Pacific Islander as an option in the racial category, and the numbers are small: 317 out of 372 of these voters cast a ballot in November.

The other major cautionary tale to consider is the drop among Black/African American voters. Especially among younger voters, and particularly with voters who registered online starting this year, racial choices were either not selected or (on the online form) were not offered for the voter to select. So, among the "Unknown/Unreported" category, there may be some voters who are racially identifiable but chose not to report or didn't have that opportunity.

Within the data, one can isolate the various racial-ethnic groups by their voter registration status, amongst other factors. I collapsed several categories to create four main groups: White non-Hispanic, Black/African American non-Hispanic, Hispanic/Latino, and all other races/ethnicities/non-reporting. 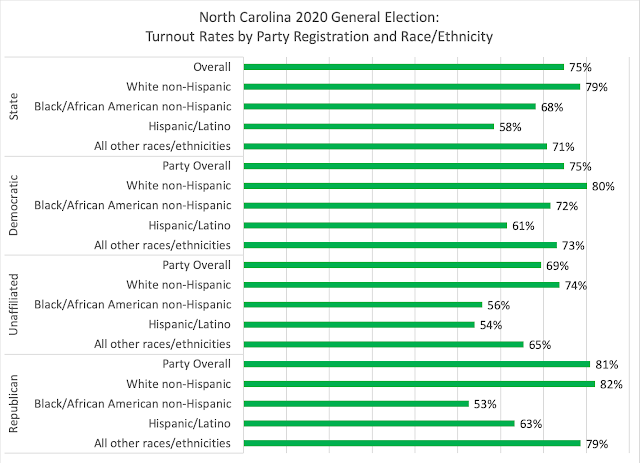 Two other analyses conducted for this post focused on generational cohorts and regions within the state. Using the Pew Research Center's generational definitions, the top component of this bar chart shows the state's turnout rates by the various generations, going from oldest (Greatest/Silent) to youngest (Generation Z). 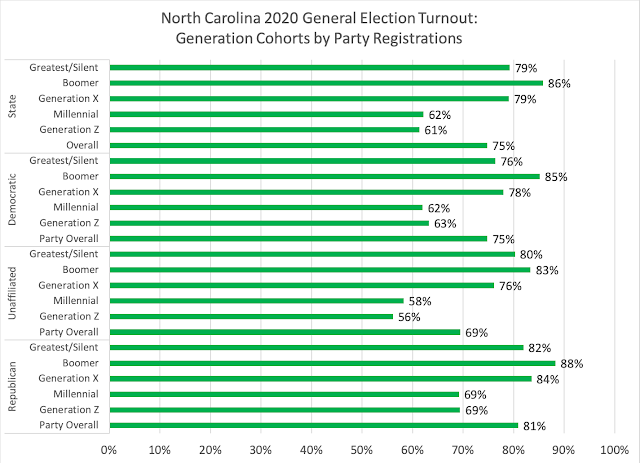 In a future blog post, a comparative analysis of past presidential general elections will show the increases in generation turnout rates, but not surprising this year, Millennials and Generation Z voters did not meet the state average for turnout: only 62 and 61 percent (respectively) compared to the 75 percent. The greatest turnout rate was to Boomers, at a whooping 86 percent.

The bar chat then breaks down each party registration by generational cohorts as well. Registered Republican Boomers had an 88 percent turnout rate, compared to only 56 percent of registered unaffiliated Generation Z voters.

The final analysis was done by regions within the state: central city voters (those within Charlotte, Raleigh, Asheville, etc.); urban suburb voters (those within urban counties but outside the central city limits); surrounding suburban county voters; and rural county voters. Again, the state's overall turnout rates within each are presented at the top, followed by the party registration breakdowns. 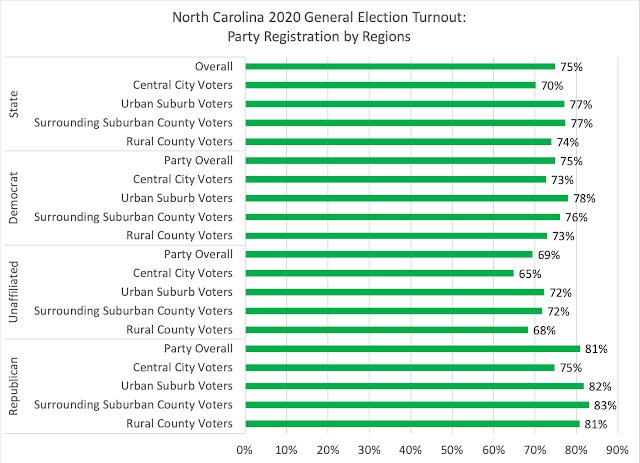 Central city voters had the lowest turnout rate, at 70 percent, while suburban voters--both inside the urban counties and surrounding counties--had the highest, at 77 percent. Within the party registrations, surrounding suburban county Republican voters had the highest, at 83 percent, while only 65 percent of registered unaffiliated central city voters cast ballots.

For a final comparison, I looked at North Carolina's 2020 November electorate compared to the same dynamics within the registered voter pool.

North Carolina's electorate was different from the registered voter pool by party registration: while registered Democrats were equal in their electorate to the pool, Republicans were three points ahead of their pool percentage, while unaffiliateds were down two. 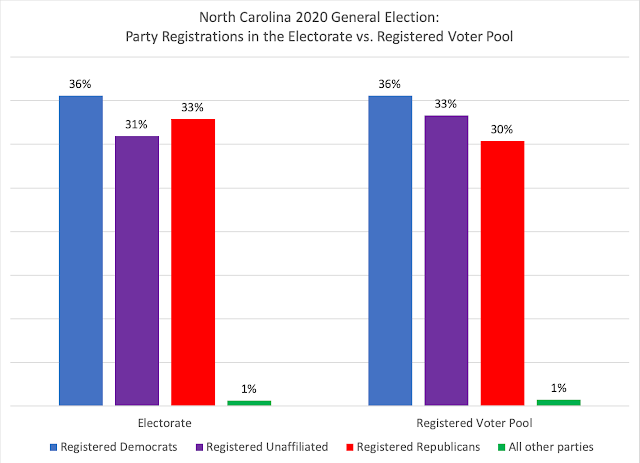 The electorate appeared to be slightly more White than in the voter pool, but the nearly ten percent "unknown" race and ethnicity is something that will continue to pose a real challenge in understanding future electorates and voters. 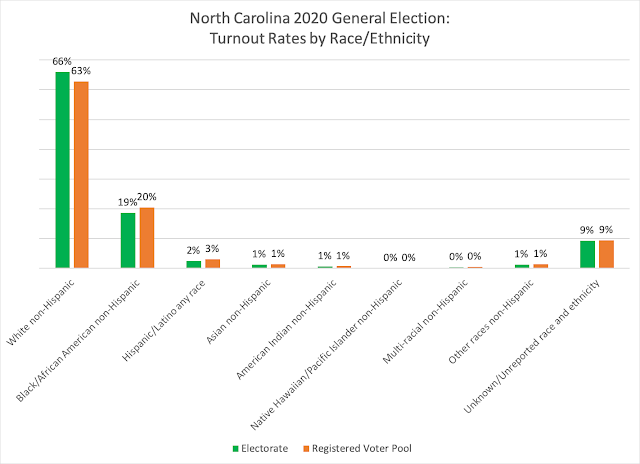 Among the regions, again suburban voters overperformed their presence in the voter pool, while urban and rural voters were slightly behind their voter pool percentages. 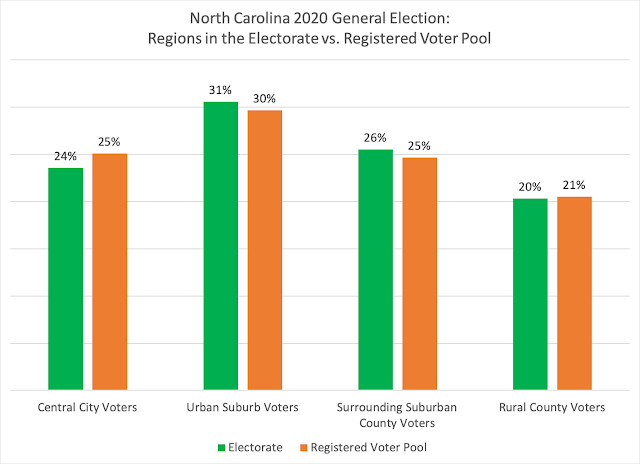 As noted in the turnout rates, younger voters (those under the age of 40) were significantly behind their potential representation in the electorate, based on the voter pool. Boomers were four points ahead of their percentage in the pool, while Generation X were two points ahead and the Greatest/Silent generation slightly ahead. 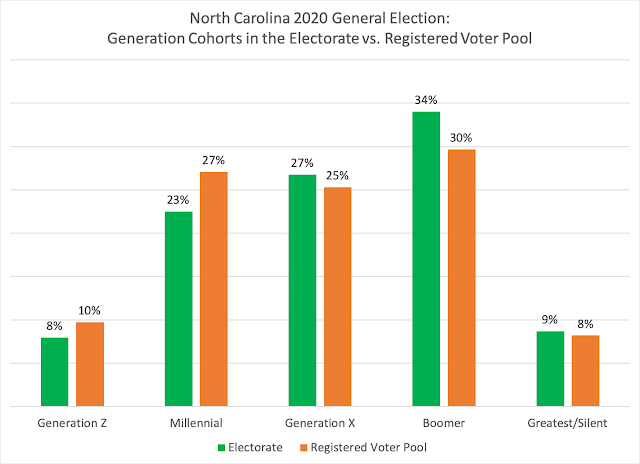 Much will be discussed about why North Carolina didn't "flip" like Georgia did, but as my colleague and fellow contributor Dr. Susan Roberts of Davidson College noted, North Carolina is a "battle ground state. But we aren't much of a swing state. We haven't swung," like Virginia and what appears to be Georgia, based on the presidential and U.S. Senate runoff elections.
Fellow colleague and contributor Dr. Whitney Ross Manzo of Meredith College offered some further important analysis on the state in the same 538 article:

Along with my fellow contributors, we likely have more analysis on the turnout dynamics and 2020 electorate in future blog posts; one that I'm particularly interested in are the 'new' voters in 2020. But I think we can continue to repeat Dr. Robert's key observation: North Carolina's political future does indicate an intense battleground status, but unless and until Democrats realize that the lessons to be learned from Georgia involves getting their voters to the polls, the Old North State will stay stuck as a lean-Republican state, due to GOP turnout rates. Even with an environment like 2020, the math isn't hard.
Beyond motivation, getting voters out will always be the equation to North Carolina's political calculus.
--------------------
Dr. Michael Bitzer is the Leonard Chair of Political Science and professor of politics and history at Catawba College. He tweets at @BowTiePolitics.
By OldNorthStatePolitics.com - January 07, 2021