A month ago, on July 13, I wrote a piece that North Carolina had nearly 70,000 requests for absentee by mail (ABM) ballots. Two weeks ago, I wrote an update that North Carolina's requests for ABM ballots would hit 100,000 sometime that week. Little did I realize that within two days of posting that, the requests did pass 100K. And as of today (Monday, August 10), we are working our way towards 200,000 requests (again, I'll say for fun) likely within the next week.

As I do on the Twitter account for the blog in greater detail, I'll give the general trends, followed by a breakdown of an important voter characteristic, and then provide what could be a model for looking ahead to an important date of Friday, September 4, when the first batch of absentee by mail ballots are scheduled to be mailed to voters.

The Numbers So Far

With the NC State Board of Election report giving the number of requests by week, the following two graphs show since the beginning of 2020 the weekly totals and the cumulative weekly totals for the requests, with a comparison of what happened in 2016 during this same time period. As a note: we currently have 96 counties reporting, with Duplin, Hertford, Perquimans, and Tyrrell counties having not reported any requests for absentee by mail ballots. These four counties are rural, and are fairly small in their voter registration numbers and previous absentee by mail ballot submissions. So, these numbers may actually be low estimates of what is currently out there in voter requests.

First, the weekly totals since January 1: 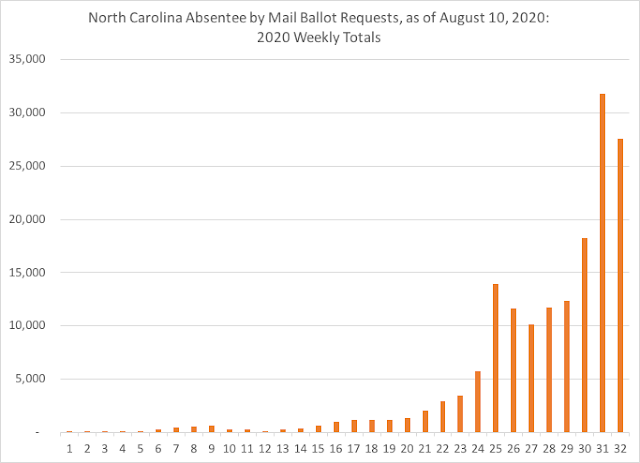 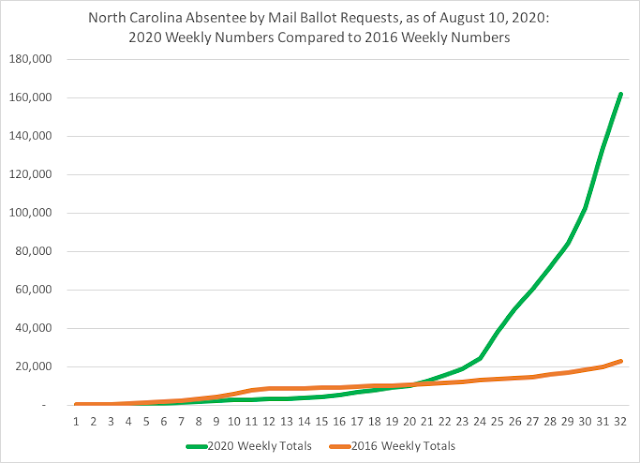 As we are about to finish week 32, we will likely see some additional numbers come in for this week and we'll start week 33. So far, week 31, which was the last week of July, had the greatest number of requests processed, at 32,000. Several counties are working through a backlog of processing; this past weekend, Wake County's Board of Elections set up a socially-distant operation to process their requests.

The Surge is Partisan...And Unaffiliated

Over the past several weeks, a general pattern has emerged of the voters requesting absentee by mail ballots: more white than the electorate, older, and but more urban/suburban. But there's one characteristic that has been a definite departure from the past trends of voters casting ballots by mail: party registration.
Back in 2016 at this same point, the two major partisan registered voters were tied in their requests: registered Democrats were at 37 percent, while registered Republicans were at 36 percent. The unaffiliated registered voter stood at a little over a quarter of the requests.
In 2020, however, there has been a surge among both registered Democrats and unaffiliated voters. 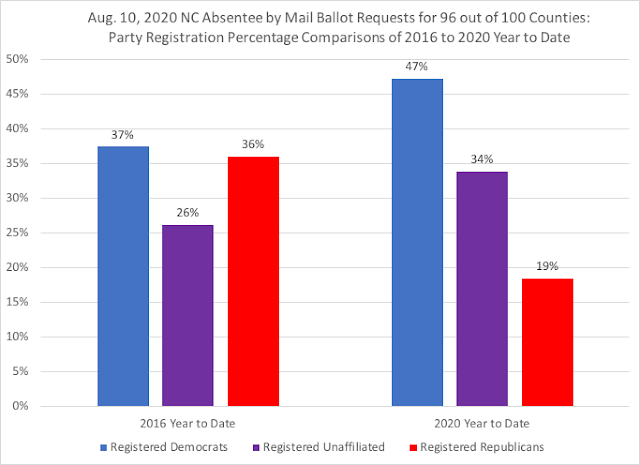 Registered Republicans are under 20 percent of the requests so far, while registered Democrats and unaffiliated voters are over 80 percent of the requests. The GOP percentage did increase over the past week (week 31), likely due to a mailer by the NC Republican Party, which helped put registered Republicans in the lead for that week. But as of this past week (week 32), their numbers have slipped behind registered Democrats and unaffiliated voters, as has been the general case over the summer weeks. 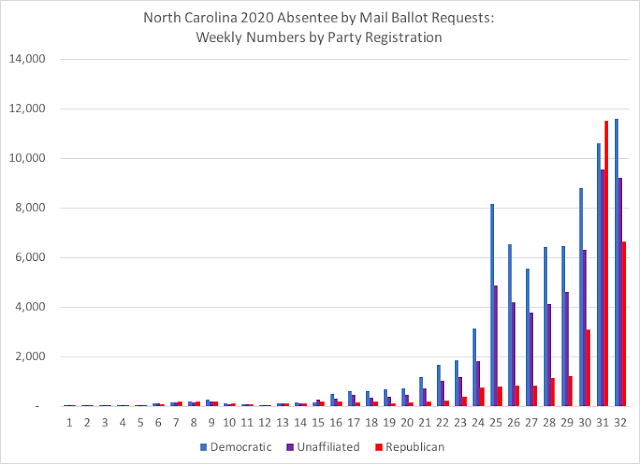 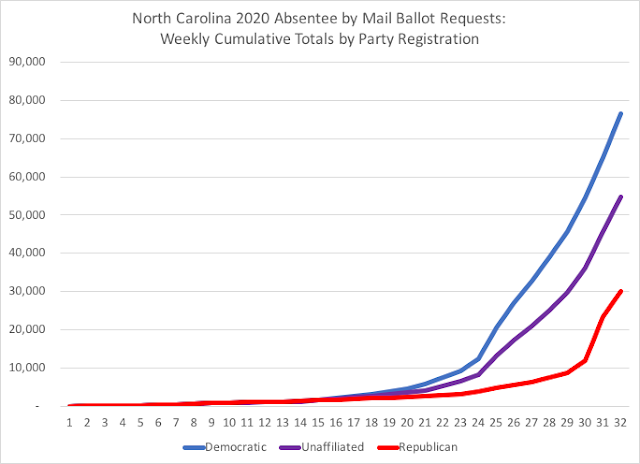 The following chart is akin to the political 'claw,' showing that at the beginning of April, requests from Democratic registered voters increased significantly, to the detriment of the Republican percentage. Only recently has the GOP percentage begun to swing back up, but this past week has seen both partisan curves flatten a bit. 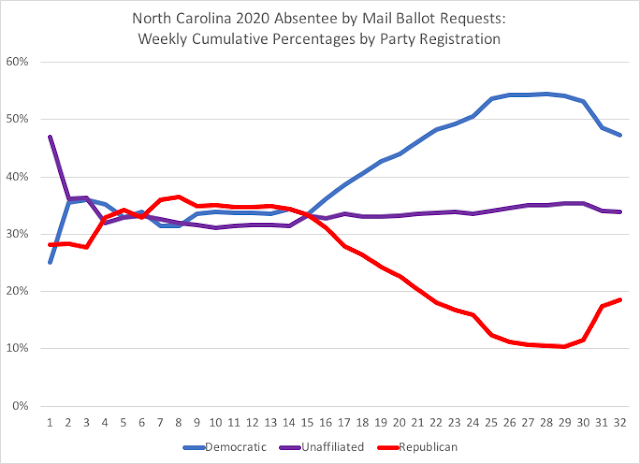 In the end, it's important to note that all party registrations are well ahead of where they were four years ago. But while registered Republicans are nearly four times ahead of their respective numbers from 2016 at this same time, registered Democrats and unaffiliated voters are nine times ahead.

In several interviews with the press about this impressive development, I've been asked the same question: "so what does all this mean?"
Again, it's important to point out that we don't have all 100 counties reporting, and that several that have reported show very few requests. This indicates that the overall numbers may still be 'low' in terms of actual requests out there.
Another factor is that while the overall number of requests is significantly ahead of the same time in 2016, only about 2 percent of the state's 7 million registered voters have requested ABMs. Conversely, six counties--Chatham, Orange, New Hanover, Brunswick, Durham, and Transylvania--have already exceed their 2016 total requests and returned/accepted ballots numbers at this point.
Beyond the data trends, I'd be hesitant to speculate on anything firm in analysis, but I think a couple of things stand out: first, the fact that registered Democrats and unaffiliated voters are at such level may demonstrate a couple of motivating factors.
One could be COVID-19 concerns that come this fall: voters may want to have the assurance of having a ballot 'in-hand' which they can either mail back or drop off at their county board of elections' main office or at any county early voting site. Second, voter intensity could be driving these record numbers among all three major party registrations; of course, this sign of intensity and enthusiasm must still compete with a potential pandemic environment come November. Couple that intensity and enthusiasm, minus the coronavirus concerns, with a third factor--organized campaign strategies to aid voters in getting an absentee by mail ballot--and it should be no wonder that the numbers have gone through the roof for NC mail-in ballots at this point.
The other facet to this "so what" question: what might we see come November in terms of voters using absentee by mail voting?
In a recent CBS News/YouGov poll of North Carolina registered voters (Question 47 in the cross-tabs), 28 percent indicated they would vote by mail, with the following partisan breakdowns by vote methods:
In 2016, registered Republicans were a plurality (40 percent) of NC's absentee by mail ballots, which made up four percent of the total ballots cast. If the above poll's findings reflect what could happen come November, we could see a significant shift overall to the ABM vote method, and a very different partisan composition to it.
Anyone can hazard a guess--and that's all it is right now, a guess--but the following chart gives a sense of the requests so far against the same numbers for the 2016 general election. The dotted lines lead up to September 4, when the first ballots will be mailed out, and are 'models' of what we might see if North Carolinians keep at certain 'pace' when compared to 2016's same day numbers. This pace is measured in "times" against 2016's same day numbers; for example, on August 10, the state was running seven and a half times ahead of where it was four years ago. The dotted lines represent the potential low-end model of 5 times the 2016 same day totals, all the way up to a high of 7 times. 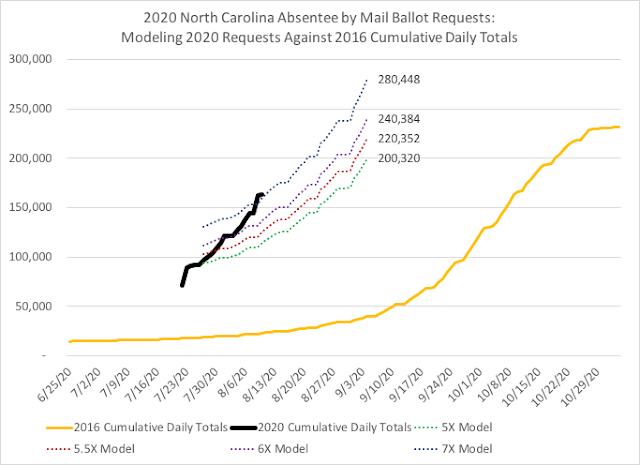 The lower end model of 5 times the 2016 numbers would put the total requests at slightly over 200,000 on September 4, 2020, which would be a greater number than what was returned and accepted in 2016 as ABM ballots. The 5.5X and 6X models would end up around the total ABMs requested in 2016 (around 231,000 requests were made four years ago), while the 7X model would see the requests over 280,000.
As of August 10, as indicated by the thick black line, 2020's requests have just started tracking the 7X model; this doesn't mean that the numbers will hold at that level over the next few weeks, but we'll just have to watch and see what happens.
What can be assured, I think, even three months out from November 3rd's general election, is that the days of "absentee by mail ballots equaling four to five percent of all the ballots cast" in the Old North State won't apply to 2020's election, as if anything in the past truly applies to this year. Again, dependent on the final numbers of all ballots cast (ABMs, absentee one-stop/in-person early votes, and Election Day), we could potentially see anywhere from a quarter to thirty percent, or perhaps even more, of North Carolina's votes cast through absentee by mail ballots.
--------------------
Dr. Michael Bitzer holds the Leonard Chair of Political Science and is a professor of politics and history at Catawba College; he tweets at @BowTiePolitics.
By OldNorthStatePolitics.com - August 10, 2020