The issue of voting by mail continues to cause controversy in the news, especially by unsubstantiated allegations that voting by mail allows for rampant fraud. Recent tweets by the president alleging "mail in ballot fraud found in many elections," while providing no specific cases or facts, continues to keep an important method of casting ballots in the spotlight.

We know that other states are utilizing voting by mail for the general election, but North Carolina has had mail-in voting as its original form of absentee voting. And typically, NC vote by mail ballots are a relatively small percentage of overall ballots cast in an election--but 2020 may herald a new day in NC voting, if early numbers are any indication of voters requesting mail-in ballots. And, as I’ll explain below, we have a general sense of what those early numbers are like, as of mid-July.


First off, what is voting by mail and its current controversy?

In research that I have done on the different methods that North Carolina voters utilize, voting by mail is typically four to five percent of the state's total ballots cast in a presidential year: 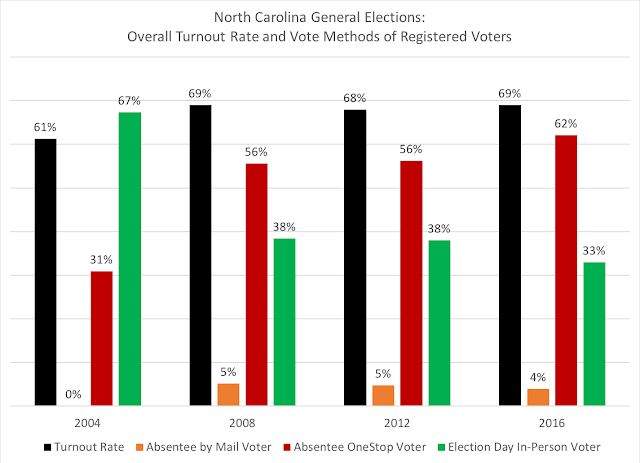 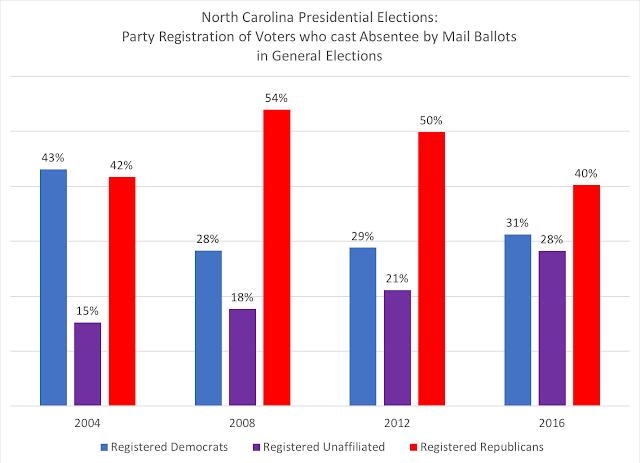 And as far as 'fraud' conducted by vote by mail, it bears repeating that the overwhelming evidence is that fraud is extremely rare when it comes to vote methods. Now, those of us in North Carolina have first-hand knowledge of a situation where vote by mail was used in election fraud--the North Carolina Ninth Congressional District's 2018 election. The NC Ninth was such a rare example that it did generate the kind of national headlines and scrutiny we would expect for an intentional electoral deception, though the deception was not by the voters but instead by a campaign surrogate.

Expectations Are For a Surge In Mail-In Ballots For November:


Vote by mail, whether it is labeled absentee by mail or whether a state may decide to conduct its entire election by mail (which five do on a regular basis), is very likely to see a significant increase in usage this year, despite the unsubstantiated protestations against it.

This increase could be due to the COVID-19 pandemic, which appears to be continuing apace, at least here in North Carolina, while surging in other states. If voters are concerned about the coronavirus and standing in line to vote, vote by mail may provide the opportunity to address public health concerns while still exercising the fundamental civic duty of voting.

Typically in North Carolina, information about those requesting absentee by mail ballots and then returning them is public, which scholars and campaigns could use for tracking who is casting ballots (but not how they are voting--that information is only released after the polls close on Election Day). However, the NC 9th Congressional District episode led to changes that closed off the information about which voters were requesting absentee by mail ballots, to prevent the same kind of fraud that was uncovered in the Ninth. A recent revision to state law also loosened the requirements for voting by mail, due to the pandemic.

Where Do The 2020 Estimates Come From?


Even though we are still several months away from the November general election, North Carolina voters are requesting absentee by mail ballots now, as is typical in an election year. So, until the absentee by mail ballots are sent out in early September to those who have requested the ballots and return them, we don't know exact numbers or dynamics of who are requesting mail-in ballots.

On Friday, July 10, I asked about whether the number of requests could be released, and secured a July 7 report generated by the North Carolina State Board of Elections. That report gave the preliminary numbers of absentee by mail ballot requests submitted to the various counties. In a follow up to all 100 county board of elections on Friday, 57 counties indicated increased numbers since the report was generated.

With this report and the additional information from some counties, I have estimated data from 91 out of the 100 counties and a sense of where things stand in terms of the number of requests coming in for absentee by mail ballots across North Carolina, especially compared to 2016. As a note: the 91 counties represent 99 percent of the reported 2016 requests that I'll be using as a comparison.


First, what did we see in 2016, both at the same time prior to the election (that would have been July 12, 2016) and for the total number of requests generated for the 2016 election (again, partisan data was available at that time):


For 2020, we don't have the party registration data of voters requesting a mail-in ballot, but the general numbers show a striking surge to both this point four years ago and where we may be heading to November in comparison to 2016's totals.

Another word on this data: for counties who followed up with their numbers, some provided an estimate, so the following numbers should not be viewed as concrete.

Based on these figures, the 2020 estimated requests for absentee by mail ballots are:


To summarize a comparative sense of the numbers from both years (again, lacking data on party registration for these year's requests):


One dynamic that can be further analyzed is the breakdown by urban, suburban, and rural counties, based on a methodology that I have frequently used.

Among the state's 54 rural counties, the absentee by mail ballot requests are double what was seen this same time in 2016 (currently a little over 4,800 compared to 2,385 four years ago this same time).

So what do these numbers seem to indicate?


Nobody knows what the environment will be like come November, either in terms of the politics or the public health. But it would appear that a substantial number of North Carolina's voters are starting to prepare for using a vote method that would keep them from having to stand in line and potentially confront COVID-19.

We will have to await the return of mail ballots to begin to get a sense of various demographic factors behind who is utilizing this vote method, and that data will start to be reported in early September once the ballots have been mailed out and comes back to each county board of elections. In addition, using data from 2016 and how each voter cast their ballot then, we will also be able to track if there is a significant shift of formerly in-person voters going to voting by mail for this November.

Lastly, folks will want to know which political party will benefit from this dynamic, and I will respond with the same words I started two paragraphs above: nobody knows. However, what we possibly know is that North Carolinians are interested in mail-in voting, and it could reshape what we know about vote methods in the Old North State for 2020's general election.

Dr. Michael Bitzer holds the Leonard Chair of Political Science at Catawba College, where he is a professor of politics and history; he tweets at @bowtiepolitics.
By OldNorthStatePolitics.com - July 13, 2020