Two Weeks Out from NC Mailing Out Ballots, And The Requests Are Nearly 400K

On September 4, 2020, North Carolina's 100 counties will send out the first batch of absentee by mail ballots to those voters who have requested them. And at the current trajectory, the Old North State could see a record-breaking number of ballots mailed.

For the past month, I've been keeping an almost daily track (taking off some Saturdays, due to no numbers being reported) of the requests from the counties that are compiled in a state board of elections report. And pretty much every morning, I'm astounded at the level of requests that continue to flood in.

Now, two weeks after that last analysis, North Carolina stands at 379,204 requests for absentee by mail ballots. The exponential growth over the past few weeks is most remarkable in these two graphs, the first being the weekly numbers of requests, the second being the cumulative requests compared to 2016's same week numbers. 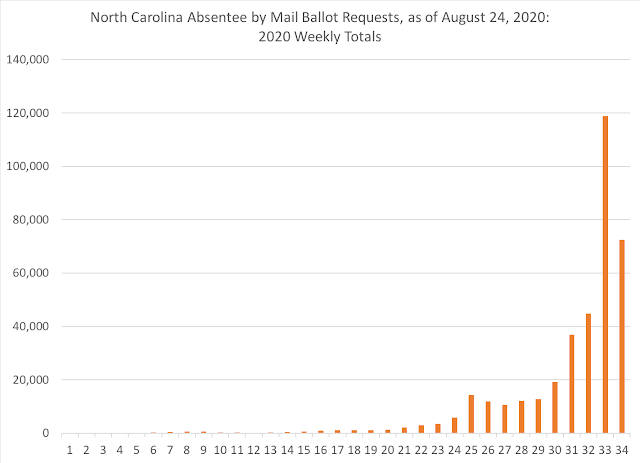 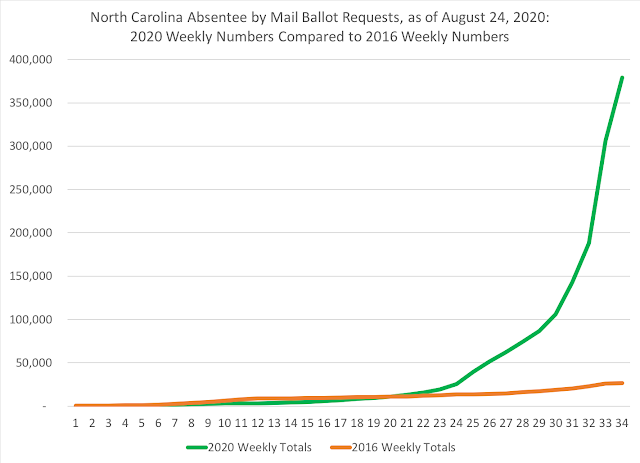 In comparison to where the state stood on this same day in 2016, North Carolina is currently 12 times ahead of that same day in requests for absentee by mail ballots.

To put this into a potential scale of what we could see come September 4 when the initial batch of ballots are mailed out, the next chart plots out different 'models' of times factors for comparing where the state stands versus the 2016 actual numbers, and then plots the current 2020 requests against those model trendlines (the dashed lines). 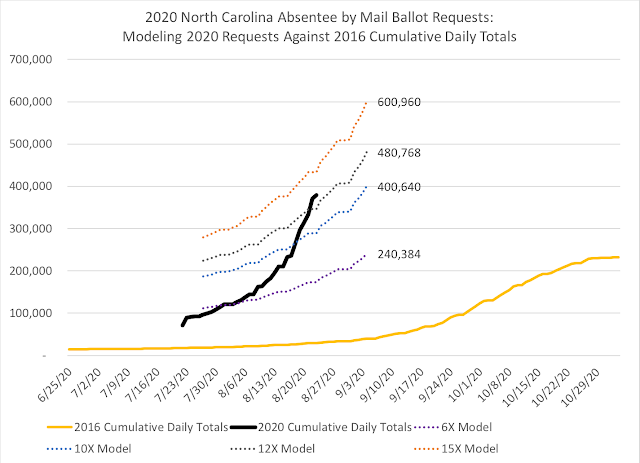 If the requests continue at or above the current 12X trendline, North Carolina could see a potential 500,000--that's half a million--requests mailed out on September 4. To put that number into perspective, the total ballots requests in 2016 was a little over 231,000, with a little under 200,000 ultimately returned and accepted as ballots by mail in the general election.

If the state hits the half-a-million request mark at the initial distribution, North Carolina would be two-and-a-half times the total absentee by mail ballots submitted and accepted from just four years ago.

This tsunami wave of requests is not coming from the traditional absentee by mail voters, at least in terms of party registration. In previous research on NC's vote methods, registered Republicans tend to be the plurality or majority of voters who use absentee by mail ballots: in 2016, 40 percent of the ABM ballots were from registered Republicans, while in 2012, their share stood at 50 percent.

At this point in 2016's requests, registered Republicans and Democrats were about even in the distribution, 35 percent to 37 percent respectively, with unaffiliated registered voters at 27 percent. This year, however, has seen an entirely new dynamic, as demonstrated in the following two charts: 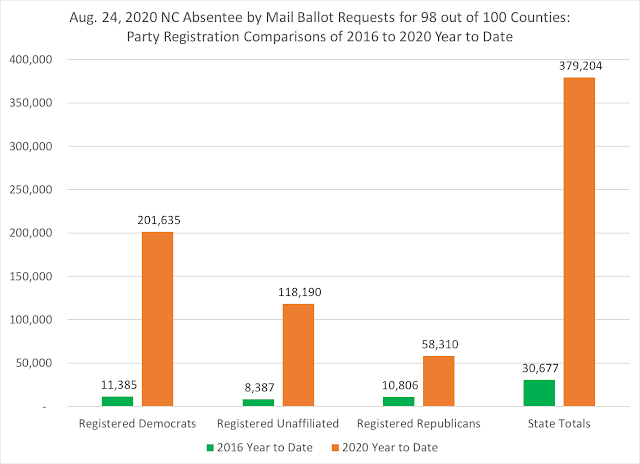 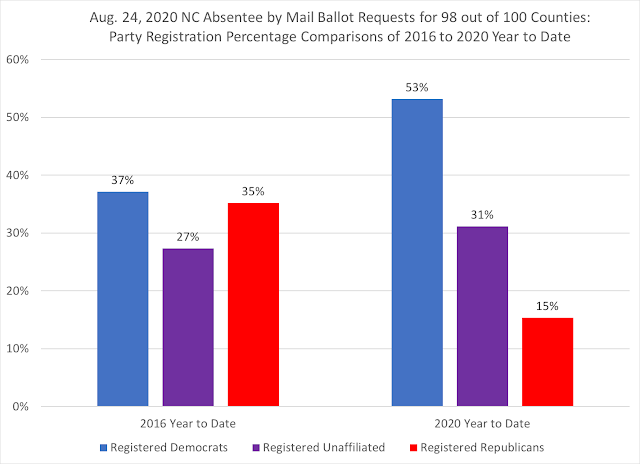 Again, week 33 (August 10) saw the dramatic spike, obviously fueled by Democrats and unaffiliated registered voters. Week 31's rise of registered Republicans was likely due to a mailer sent out to voters by the North Carolina Republican Party, with a second mailer recently sent out and producing comparable numbers, but nothing approaching what Democrats and unaffiliated voters are doing. It's also likely that the mixed messages sent by the President regarding absentee by mail voting and mail-in voting has cause some confusion to the base, and we'll have to wait and see if the traditional Republican mail-in voter goes in-person this year. 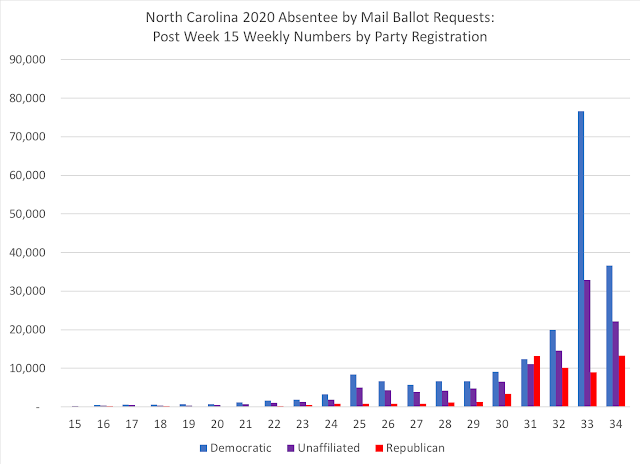 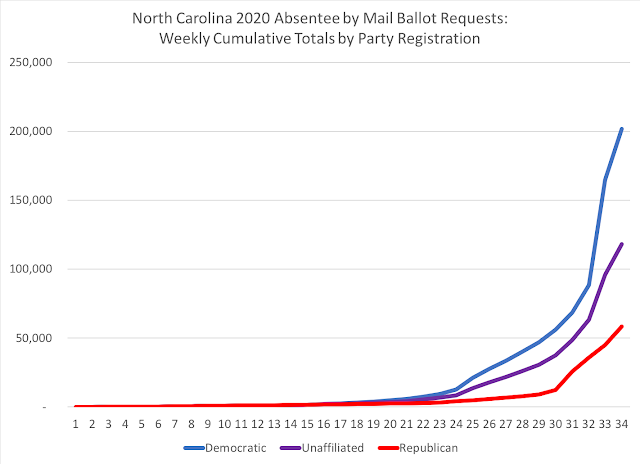 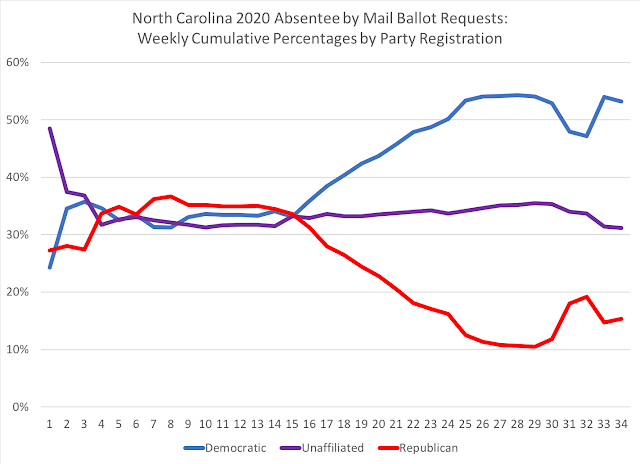 What's also interesting is that in 2016, the absentee by mail electorate was 85 percent white; so far, the requests coming in are 71 percent white, with 17 percent black/African American. 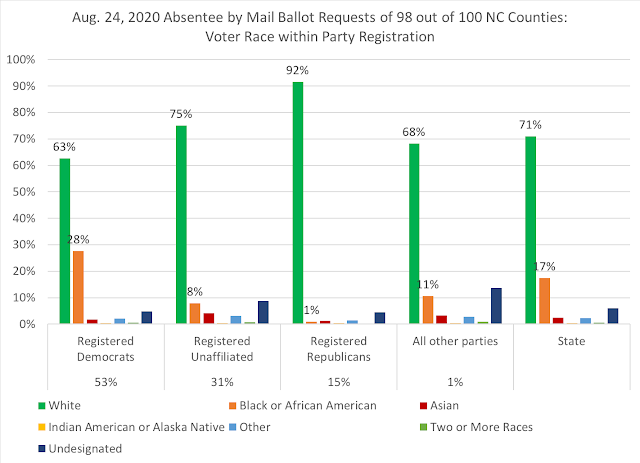 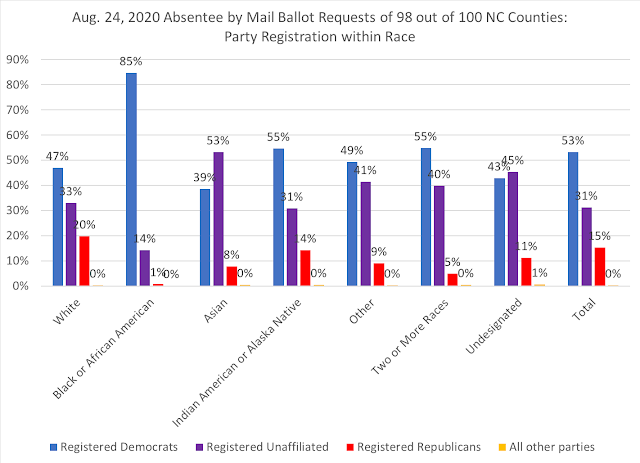 Traditionally, black/African American voters in North Carolina have used in-person voting, and primarily early voting, to cast their ballots. But these numbers indicate a higher percentage so far having requested their ballots by the mail, and it will be key to watch the return and acceptance rates after September 4.

Finally, the age distribution of the NC ABM requests so far shows an older electorate asking for ballots, which is not surprising for this vote method. 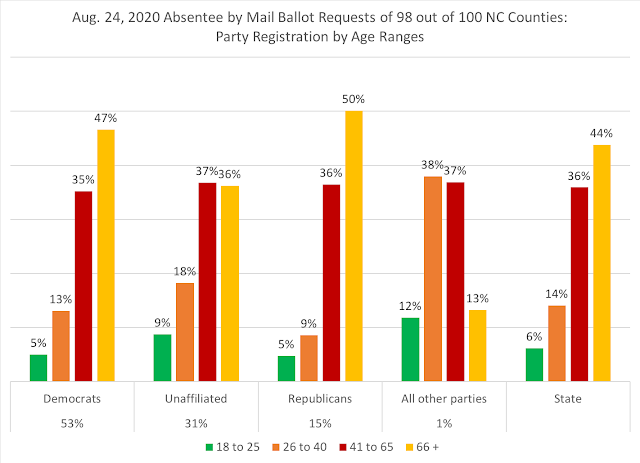 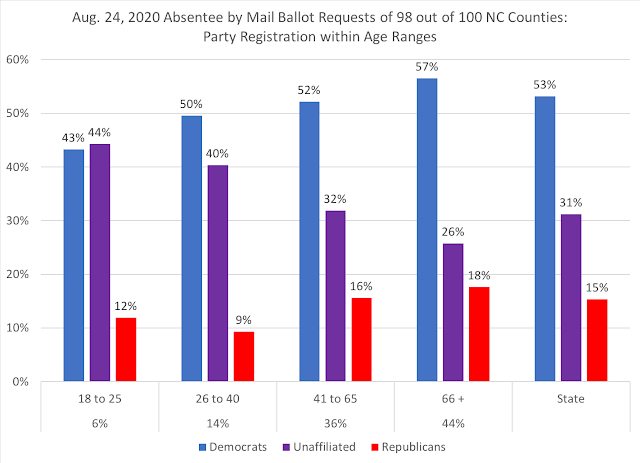 Twenty percent of the requests have come from voters under the age of 40. Traditionally, there is a 'spike' at the bottom end of the ages, representing college students who ask for an absentee by mail ballot to cast. With the moves to online at a number of colleges and universities in the state already, this might be an important dynamic to watch.

With voter interest/enthusiasm, concerns about COVID-19 and coronavirus, and the uncertainty that COVID could cause for when early voting starts on October 15, these numbers should not be surprising to anyone. But they are to me, each day that the numbers dramatically increase.

Following the initial distribution of ballots mailed out and the process of returning and confirming/accepting these ballots, we will have another data set to use and can track how current ABM voters in the past cast their ballots (if they did, or if they are new voters), along with more specific demographic dynamics that the 'bulk report' numbers don't allow at this point.

That report will likely begin the week of September 7, following Labor Day and the beginning of ABMs returned.

What we will also have to watch is the rate of the times factor trendlines to see how September and October continue to pace the requests as we move towards Election Day on November 3. At this point, it's anybody's guess (and that's all it is--a guess) as to the ultimate impact of absentee by mail ballots on North Carolina's general election.

But suffice it to say, there will be a significant impact the likes of which the Old North State has never seen before when it comes to North Carolinians casting their ballots.