With recent news stories surrounding public Confederate statutes across the South, North Carolina has been home to several controversial decisions, and removals, of these memorials. All around the country these statues have come under fire as part of the Black Lives Matter movement, with many being toppled by protestors. While more Americans favor letting Confederate statues stand than removing them, it is not a majority, and the percentage of supporters has decreased quite a bit in the last few years- a fairly quick shift in public opinion. Still, many North Carolinians oppose the removal of Confederate statues, which has led to a few tense standoffs between Black Lives Matter protestors and counter-protestors.

For example, there has been a storm of controversy around the outside of the Alamance County courthouse, where a Confederate monument depicts a generic Confederate soldier on top of a column. The base of the statue is adorned with carved Confederate flags, and lists of Confederate soldiers from the county and other Confederate relics are stored inside the monument. A group of community leaders, including educators, business people, and politicians, have called for the monument to be removed from its pedestal and placed in a museum, but Alamance County Commissioners claim they don't have the power to do so under North Carolina law.

After some protests about the statue, fear of a violent confrontation led the City of Graham, NC (the county seat of Alamance County) to issue a State of Emergency and curfew on June 20. Then, on June 26, the Alamance County sheriff issued a notice that they would deny all applications for permits for demonstrations (this has since been temporarily blocked by a federal judge): 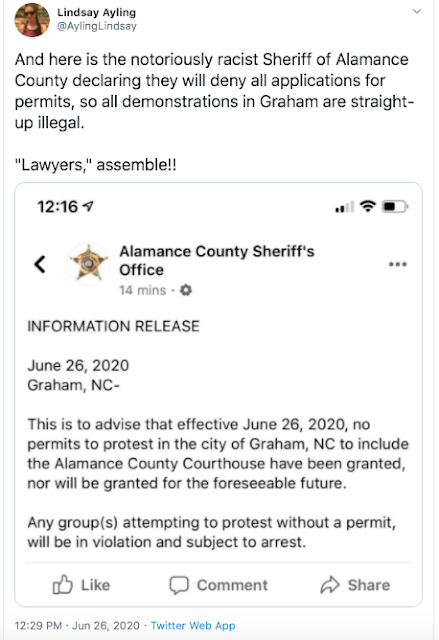 Later that same day, the Graham Chief of Police posted an anti-Black Lives Matter post on the department's Facebook page. He has since apologized, but residents of Graham are upset at what they call “inappropriate” actions. And these reactions are far from singular; across the United States more and more Americans are calling to “defund the police” and many police officers have reported feeling as though they are under attack from the very communities they serve. In addition, the president has weighed in on the issue in a tweet.

However, things get more interesting when these results are broken down. For example, while a majority of each political party says that they respect law enforcement a great deal, Republicans are much more uniform in this. Only 11% of Republicans give a different answer, while a full third of Democrats and the unaffiliated did. 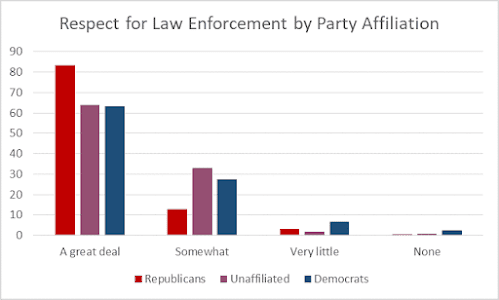 There are also clear differences by age of respondent. Younger voters (a mix of Gen Z and Millennials) are half as likely to say they respect law enforcement as older voters, and their age group is the only group in which respect for law enforcement does not hold an outright majority. 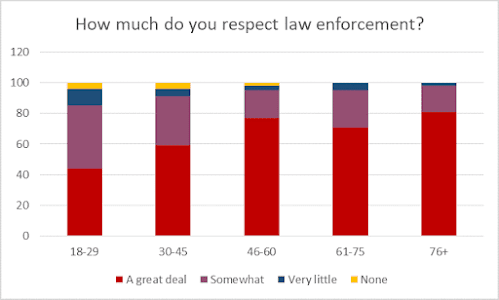 In the same survey, we asked respondents how safe they felt in this country. As you might have guessed, those who respected law enforcement most were also more likely to report that they feel safe (66.5%) versus those who didn’t express full respect for law enforcement (53.5%). Because Republicans tend to express more full-throated support for law enforcement, you might then estimate that they feel safer, but interestingly this was not the case in 2016. Republicans were much more likely to report feeling “Somewhat Unsafe” than Democrats or Republicans (all groups reported similarly low levels of feeling “Very Unsafe”). 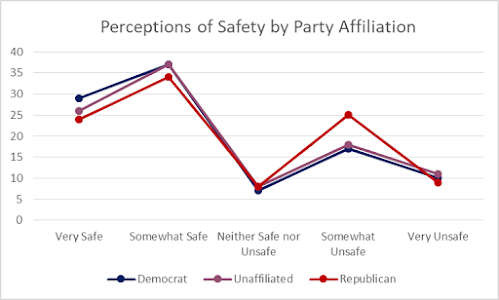 The spark that lit the fire of recent protests against police was the now infamous video of the murder of George Floyd by four Minneapolis police officers. There are countless other Black Americans who have died at the hands of law enforcement, and North Carolina experienced its own protests after the fatal shooting of Keith Lamont Scott by Charlotte police in September 2016.

The Meredith Poll at that time was conducted Sunday night through Thursday night. Scott’s shooting took place on the Tuesday night of our calling, which means that we have data asking North Carolina residents about law enforcement right before Scott was killed and right after. While perhaps only Charlotte residents were aware of what had happened on Tuesday, September 20, the rest of the state certainly knew by Wednesday, September 21, after news of both the shooting and the protests swept the state. This means that we have at least two nights in which our questions were being asked in a totally different atmosphere, which is what we political scientists call a natural experiment. 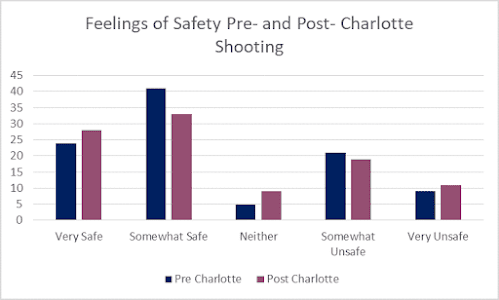 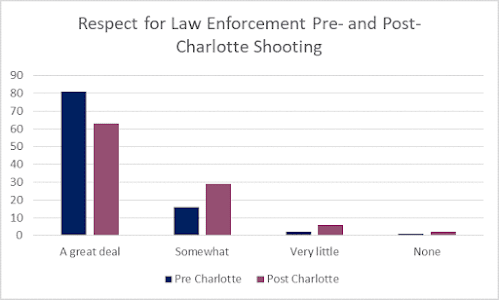 We at the Meredith Poll plan to ask these questions again this fall, to see if and how answers have changed over time. Because of the increased, much more intense attention paid to police brutality in recent months compared to 2016, I would venture to guess that we will see lower overall levels of support for law enforcement, especially among members of minority groups.