In a recent McClatchy article on the challengers to U.S. Representative Alma Adams (D), who represents the 12th Congressional District based solely in Mecklenburg County, the issue of who represents a "generational change" agent has become a target to the congresswoman.

In the article, the reporter uses NC State Board of Elections and Ethics Enforcement age ranges to describe the voters in the 2017 general election for the City of Charlotte:

"(V)oters between 18 and 25 made up just 2.5 percent of those who took part in Charlotte’s general election last November, according to Mecklenburg County Board of Elections data.

Voters between 26 and 40 accounted for 18.38 percent of ballots cast in Charlotte while people between 41 and 65 made up 52.41 percent of the vote. Those over 65 constituted 26.64 percent of the Charlotte votes cast, according to Mecklenburg County figures."
While these age ranges give a portrait of the electorate, another approach that I advocated to the reporter was to take a generational (as of 2017) view of the voters and their turnout, namely:

Using this cohort classification, the registered voter pool for Charlotte upon the 2017 general election was: 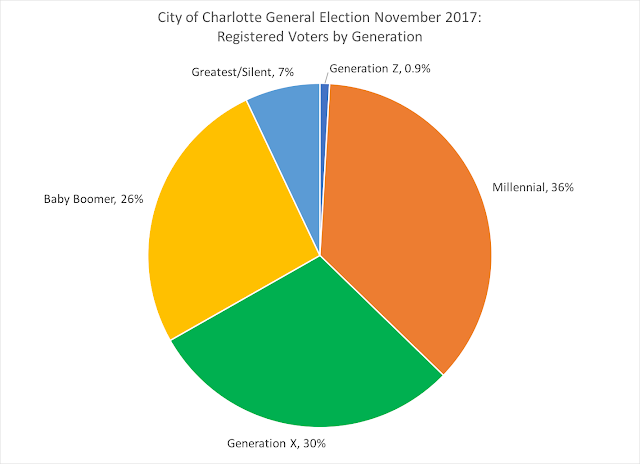 And the actual electorate (voters casting ballots) of Charlotte's 2017 general election was: 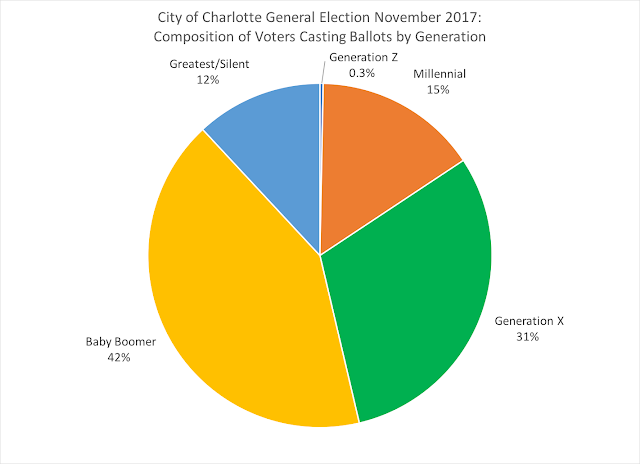 And the turnout among the generations, and their party registrations, for the City of Charlotte's general election in 2017 was: 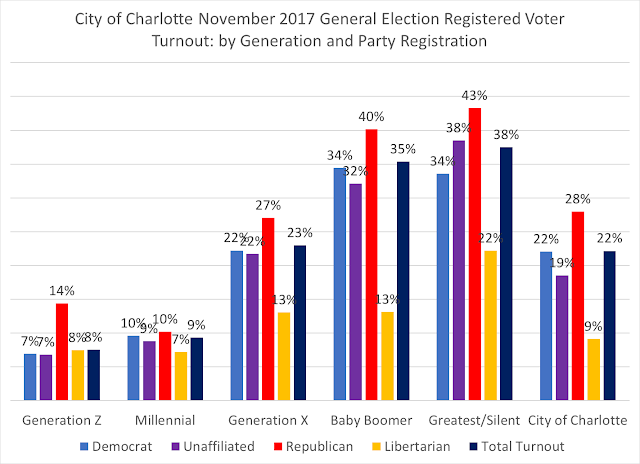 While NCSBE's voter age range makes a point about turnout and electorate composition, the data mixes generations within the NCSBE ranges: Generation Z with Millennials, Millennials with Gen Xers, Gen Xers with Baby Boomers, and Boomers with the Greatest/Silent generation. Having a clearer classification scheme, and using actual voter data to classify, presents a more coherent picture of the impact of different types of voters.

And, one can also make the argument that the new Millennial-dominated city council for the Queen City was voted into office, effectively, by Baby Boomer and Greatest/Silent generation voters.
By OldNorthStatePolitics.com - April 06, 2018