Some Exploration of the True Wildcard in NC's Early Voting: Registered Unaffiliated Voters

With the near-final numbers posted in terms of North Carolina's absentee voting before Tuesday's election, the true wildcard seems to be the huge spike in registered unaffiliated voters who have cast a quarter of all the absentee ballots.

Their numbers are up over 40 percent from where they were in 2012 at the end of the early voting period, so I decided to look more closely at these voters who could potentially hold the balance for which party wins in North Carolina.

We see this influence of younger voters in breaking down each party registration category. Voters under the age of 51 are a majority (55 percent) of the registered unaffiliated voters who have cast accepted absentee ballots so far in this year's election in North Carolina. 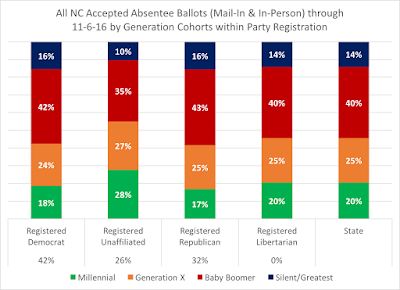 One of the key dynamics going on in North Carolina's voter pool is the fact that most Millennial voters (who are the second largest generation cohort in the state's voter pool) live in urban counties; these urban areas also dominate the state's politics and voter pool as well. 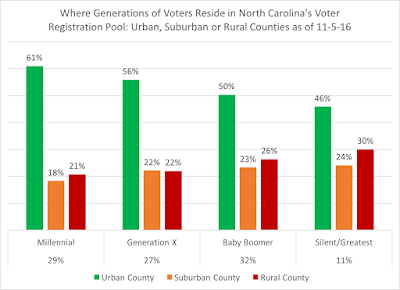 I next isolated all of the state's registered Millennial voters and looked at their location and party registration. 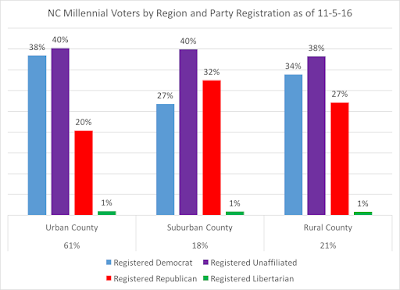 So, this gives us a sense of Millennials and their influence in North Carolina politics.

Now, we turn back to the unaffiliated absentee voters who may be the key to this year's election in North Carolina.

For unaffiliated voters, they have to pick a party to cast a ballot in for the primary election, and we can match their March 2016 voting records of which ballot they requested with their current status. Granted, this 'proxy' may not necessarily capture all aspects of the dynamics of a voter, simply due to the partisan nature of many North Carolina counties. To have any influence in a county's politics, especially if you are in the minority party, you may have to be a registered unaffiliated voter and cast your primary vote in the party opposite your true partisanship, and then return home in the general election. Or perhaps a registered unaffiliated voted in a party's primary to vote against a particular candidate; again, this proxy may not be the best one out there, other than asking "for whom did you cast your general election ballot for?"

With those caveats said, among the 807,000 unaffiliated voters who have cast accepted absentee ballots so far, the overall composition of this group by generation and region point to a distinct slant: 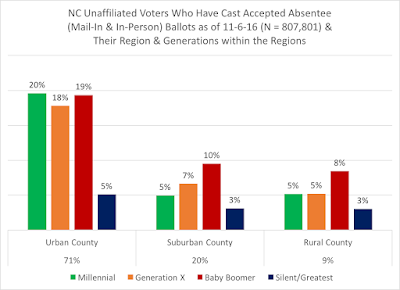 Among the early unaffiliated voters, 38 percent are urban Millennials and Generation Xers (under the age of 51), with another 19 percent being urban Baby Boomers. North Carolina's urban areas have been trending more and more Democratic in nature, as evidence by Obama receiving 56 percent of the urban county presidential vote in 2012. 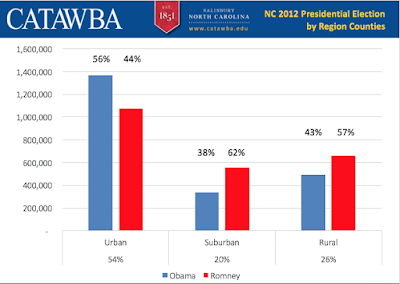 We also know that Millennials tend to be more Democratic-leaning in their partisan affiliation. 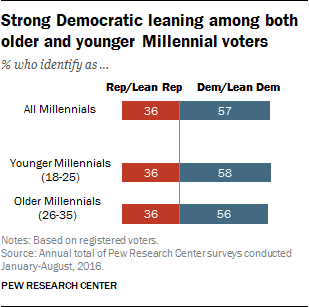 In using the 'proxy' of voting in North Carolina's March primary, the thinking is that we could see a sense of where unaffiliated voters may 'see' themselves as partisans.

Of the 807,000 unaffiliated voters who have cast accepted absentee ballots so far for the November election, 44 percent (348,000) cast ballots in one of the two major parties' primaries in March of 2016. 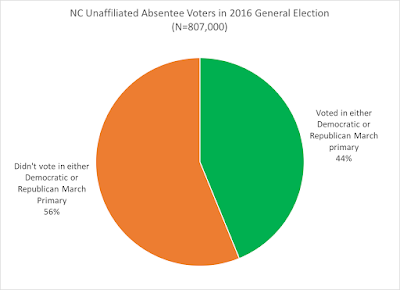 Of that 348,000 primary voters, 56 percent cast ballots in the Republican primary, while 44 percent cast them in the Democratic primary. 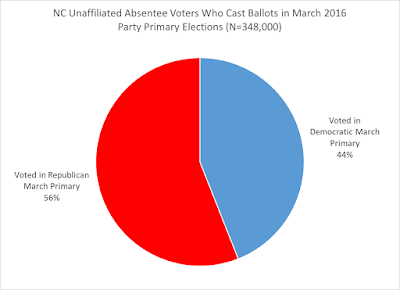 So, one would think that NC's unaffiliated voters are perhaps more leaners to the Republican Party than the Democratic Party. 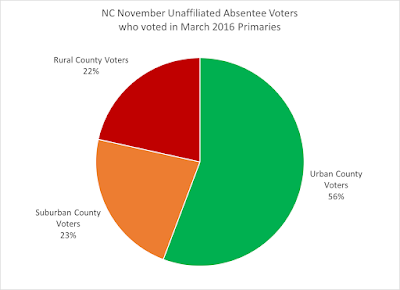 Among those urban county unaffiliated voters, Millennials and Generation Xers made up 50 percent of the ballots being cast in the two parties. And of those two generations, which party did they cast their ballots in the primary? 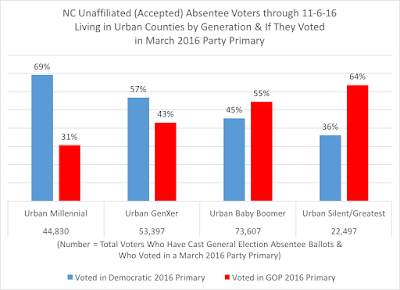 So in urban counties, which have dominate the November accepted absentee vote totals so far with 55 percent of the accepted ballots cast, urban unaffiliated voters who are under the age of 51 and who cast ballots in the March primary election did so towards the Democratic primary (63 percent) over the Republican primary (37 percent).

Granted, half of the urban county unaffiliated voters who voted in March split between those over and under the age of 51, but making a claim that a majority of unaffiliated voters are more Republican-leaning than Democratic may be masked by the voter's location and a more detailed analysis of which party they participated in for the March primary.

Ultimately, this may be an exercise in probability, simply because of the 807,000 unaffiliated voters who have cast accepted absentee ballots for Tuesday, the majority--57 percent--of them didn't participate in the March primary and we have no idea of how they may lean in their partisan affiliation. And of these non-March primary voters, over one-third of them (36%) are Millennial voters. 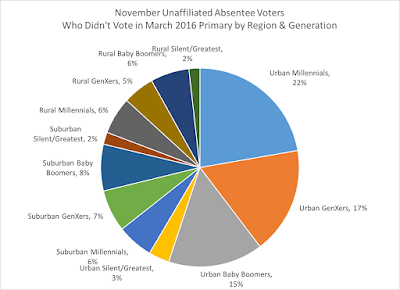 Based on the possible different interpretations of the above data, we should probably continue with the belief that this pool of 800,000 unaffiliated voters, along with another chunk of unaffiliated voters on Tuesday, will tip the balance of partisan power one way or the other in North Carolina. There's just too much uncertainty about this influential and unknown group of voters to make a call one way or the other, but different ways of looking at them can produce potential benefits or disadvantages to one party or the other.
By OldNorthStatePolitics.com - November 06, 2016