While election day isn't until a week from today, it's been more than 40 days since the first ballot was accepted in North Carolina and over a week since the first person walked into an early voting site and cast an in-person ballot. So, it seems like a good time to take an early, preliminary, provisional, tentative assessment of what we can glean from the data thus far. So, with all of the caveats we can muster, here are some observations that we think we know about the 2022 electorate thus far.*

1. Thus far, Turnout Is Higher Than Many (Including Us) Anticipated

The graph below shows accepted ballots through May 9 2022 (solid line), as compared to the accepted ballots on the same day in the 2020 and 2018 elections. Neither is a perfect comparison; 2020 was a Presidential election year and 2018 was the last midterm, but was a "blue moon" election with no major statewide offices on the ballot, beyond a state supreme court seat contest in November.

We would expect 2022 primary turnout to trail 2020 turnout (Presidential years are always higher than non-presidential years) and to rest above 2018 turnout when no other major statewide offices were on the ballot. While that's what we have seen, 2022 is closer to 2020 than many people (including both of us) expected. Of course, we'll have to wait and see whether the trend continues on election day. 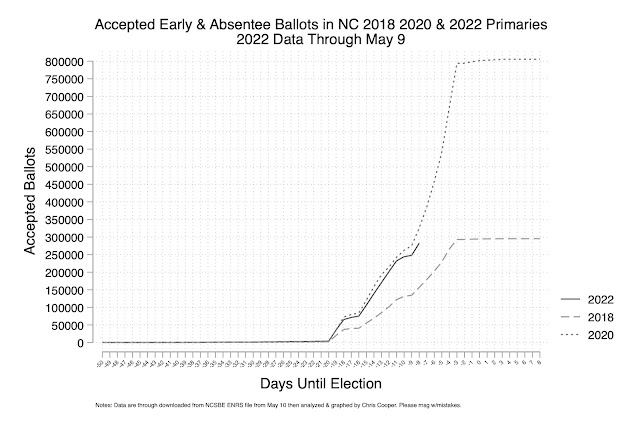 One other interesting aspect: expectations was that the Republican ballot, with a contested U.S. Senate nomination battle, would draw the most attention of the party primaries, but up until this date, both major parties have been fairly evenly split in the share of ballots pulled. Whether that holds through the final days of early voting and on Election Day remains to be seen, but it does seem to indicate an interest on both sides of the aisle.

2. However, Same Day Registration Is Lower Than Expected 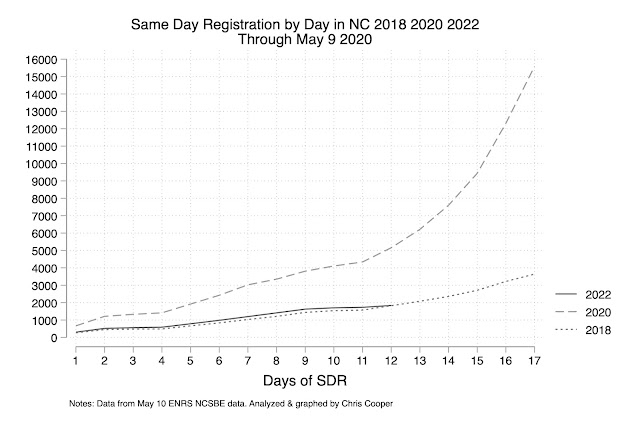 As Michael Bitzer wrote about, mail balloting has typically been a relatively small proportion of overall votes in North Carolina's elections. Then came the General Election of 2020 when mail voting suddenly comprised almost one in every five ballots cast, thanks to COVID and a relaxation of witness requirements. Thus far in 2022, about 4% of the total early ballots cast have been by mail. That number will likely go down even more when election day votes are counted. We'd expect it will be higher than the relatively minuscule totals of previous elections, but far from the high mark of 2020.

4. Unaffiliated voters appear to be responding to their primary environments.

Thus far in 2022, 63% of Unaffiliated voters are choosing the Republican primary. This movement from election to election reinforces the idea that some of these Unaffiliated voters "float" from primary to primary, depending on the electoral environment, and which party has the most competitive elections. 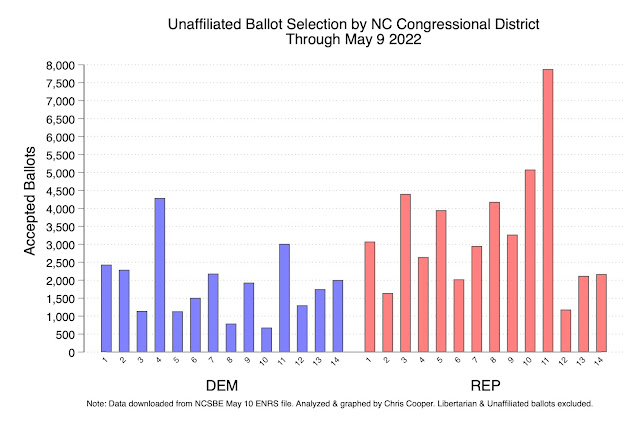 As any visitor to this blog likely knows, the NC11 Republican primary featuring incumbent Madison Cawthorn is a fascinating and somewhat unpredictable contest due to Madison Cawthorn's fundraising prowess and name recognition combined with his....let's just call them political liabilities. That race has become even more unpredictable because of the massive number of Unaffiliated voters who are voting in the Republican primary.

As of May 10, more than 4 in every 10 Republican ballots in NC-11 has come from someone who is not a registered Republican. A few hundred of those recently left the Democratic Party and switched to the Unaffiliated. The result of all of this is that estimates about past voting behavior may not do much good in predicting the outcome of this election.

Within the overall early voting electorate so far (as of May 9), a couple of demographic dynamics are worth noting.

First, the average age of an early primary voter is 64 years old, for both the Democratic and Republican primaries. Considering that the average age of the registered voter pool is 49 years old, older voters have an outsized influence so far in determining the party candidates for November's general election (and maybe picking the final winner in unchallenged November contests).

Within the generational cohorts (as defined by Pew Research Center), only nine percent of the early primary voters are under the age of 42, meaning Millennials and Generation Z voters make up one out of ten early primary voters. For both younger cohorts, especially Millennials, their party preferences tend to lean to the Democratic primary so far, as evident in this chart. 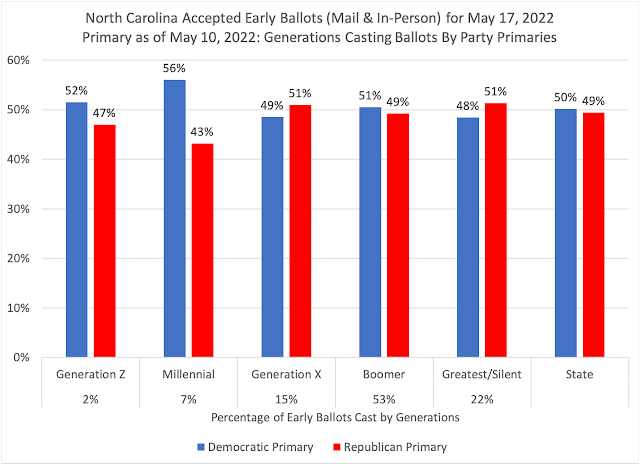 Among Generation X and older, the party primary divide is about even. 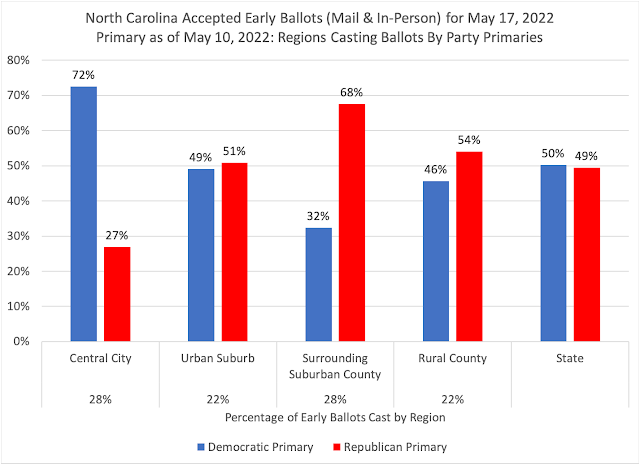 In general elections, Democrats dominate central cities, while Republicans dominate in the surrounding suburban counties. This is playing itself out in the selection of primary ballots as well.

In Sum: There's a Lot We Don't Know

The early vote is interesting and important. It gives us some sense of how voters are acting in the unique political environment of 2022. But it raises as many questions as it answers. For example, we know that turnout is up right now, but that could be because voters are activated and turnout will remain high, or it could be because voters are more likely to cast an early vote this time (as opposed to an in-person vote).

As a result, if you're looking to read tea leaves to find out who's going to win, you'd best look elsewhere.

PS: if you want to keep up with the daily trends on early voting between now and the primary's election day, make sure to check out our Twitter feeds: @chriscooperwcu and @BowTiePolitics.

*All of the analysis reported is from NCSBEs ENRS data and includes only accepted ballots.