With the dawn of a new year, the race to the November general election is (with a primary blip) well underway. And as North Carolina prepares for yet another competitive mid-term election environment, a review of where the state's voter pool stands, and the changes last year brought about, is in order. This post takes a look at where North Carolina's voter pool stands at the beginning of mid-term election year and who registered and switched parties in 2021.

Using the NC State Board of Elections data set for the December 25, 2021 (a data set wasn't available on Saturday, Jan. 1), the 7.2 million registered voters continue some key trends that have been developing over time, and one important trend will likely come to fruition in the early part of the new year.

For comparison, I used the January 9, 2021 voter registration data, which saw registered Democrats at 35.5 percent of the total pool, with registered unaffiliated voters at 33.2 percent and registered Republicans at 30.6 percent.

As of December 25, registered Democrats slipped to 34.7 percent, unaffiliateds rose to 34.3 percent, and Republicans were marginally down to 30.3 percent.

When breaking down the overall end-of-year voter pool by generation cohorts, Boomers made up a plurality at 29 percent. But taking voters under the age of 40 (Millennials and Generation Z), those combined generations are 38 percent of the entire pool. This generational replacement has been, and continues to be, well underway at least in terms of registrations. It's another thing, however, with actual voters who cast ballots (see this analysis of NC's 2020 electorate and the different turnout rates by generations).

The party breakdowns by generation cohorts show the continued push of Millennial and Generation Z voters opting for unaffiliated status. 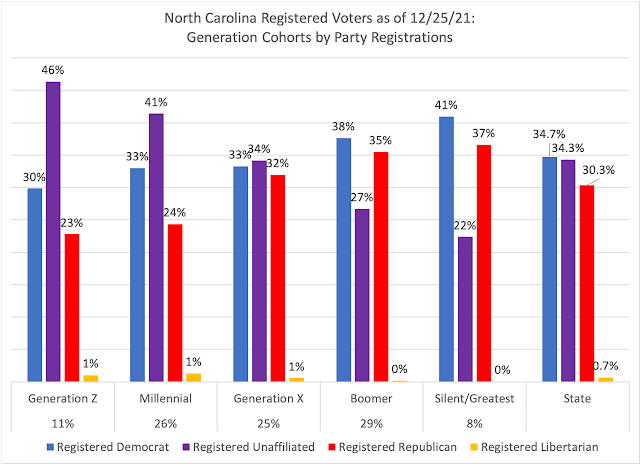 With over 40 percent of Millennials and Gen Zers going unaffiliated, the flight from the formal party membership continues. Generation X continues as a 'bridge' generation, with each major party registration at a third of that cohort, while older voters (Boomers and Silent/Greatest) remaining partisan adherents. 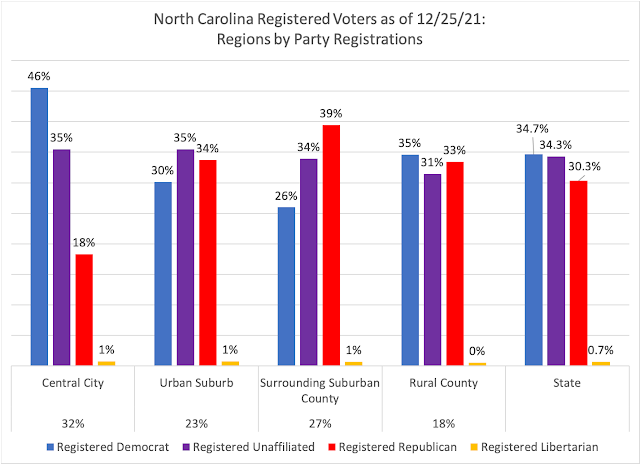 Less than 20 percent of central-city voters are registered Republicans, while in the urban suburbs, unaffiliated voters have taken the lead in those areas. The most Republican areas continue to be the surrounding suburban counties, with rural counties almost evenly divided.

At the end of 2021, almost 300,000 North Carolinians became registered voters since January 9 (those who were not on the voter rolls as of January 9, but in the data as of December 25 are counted). The following table breaks down the monthly numbers, by party registration. 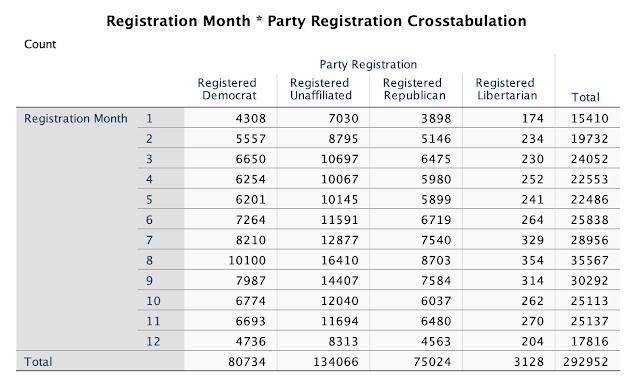 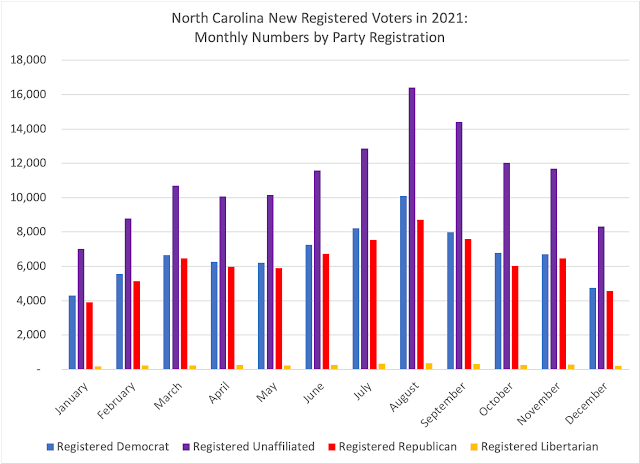 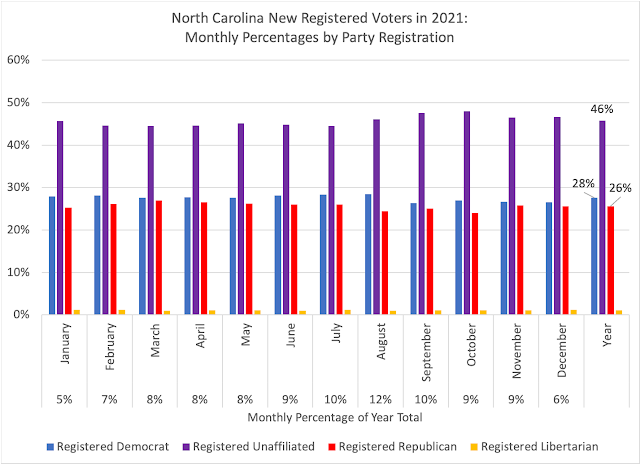 Among 2021's new registrants in the state, 61 percent were White non-Hispanic, 17 percent Black/African American non-Hispanic, and 7 percent Hispanic/Latino, with 9 percent with unknown race/ethnicity.

Among the generations registering this past year, Generation Z was a significant plurality, with over 40 percent of new voters; when combined with Millennials, voters who were 40 years-old and younger made up two-thirds of North Carolina's 2021 registered voters. 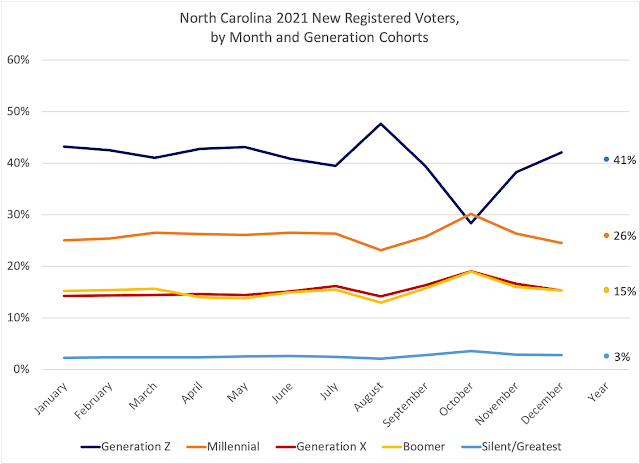 The 'dip' in Gen Z and corresponding uptick of the other cohorts could have been due to the off-year general elections (those that were held) and overall up-tick among older voters.

One other aspect of 2021's NC new voters: of those new voters who indicated their birth state (251,000), only a third--34 percent--of the new voters were born in the state. These native North Carolinians went 45 percent unaffiliated, and 27 percent each for registering Democratic or Republican.

Among the 'non-native' new voters in 2021 (using the U.S. Census regions classification), the South saw the largest number of new voters registering, followed by the Northeast, Midwest, the West, and other (born overseas or in Puerto Rico, US Virgin Islands, or Guam). The party registrations varied among these regions, but the trend towards unaffiliated status remains consistent. 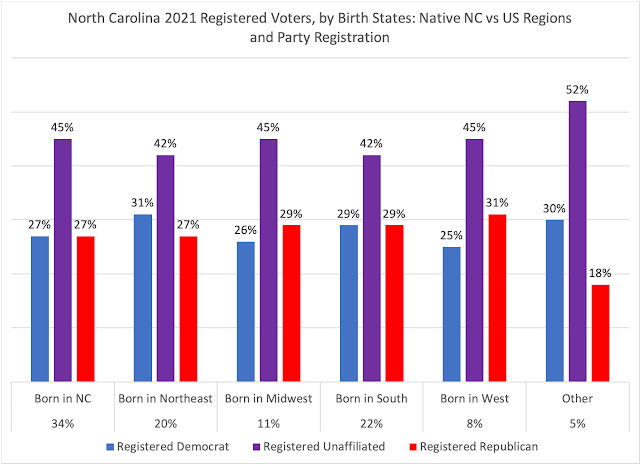 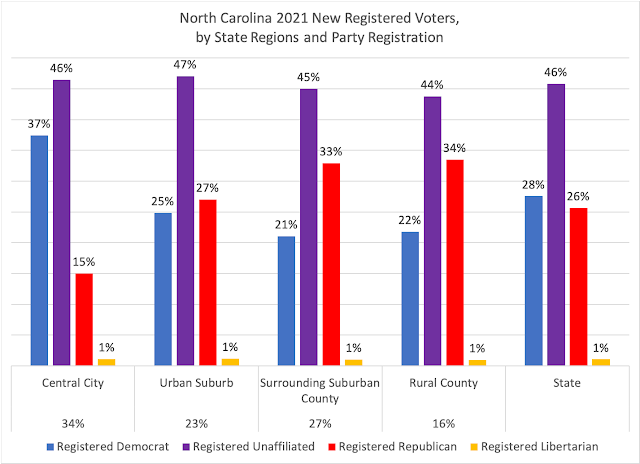 Finally, in this 'year-in-review' analysis, I looked at those voters who were registered on January 9 and had a different party registration on December 25.

The state board provides a spreadsheet of "party switching" voters throughout the year, but in looking deeper into the data, I found that there are some 'intriguing' voters who switch their party registration, then sometime later (perhaps only days, maybe months), switch back to what they were originally registered. And sometimes the voter switched party registrations multiple times.

For example, one voter switched from Democratic to Unaffiliated, then three days later, went back to Democratic; then, a little more than a month later, switched to Libertarian.

With this analysis, I only looked at what each voter started as in party registration status at the beginning of 2021, and what they ended with, and if they stayed the same party or not. In total, about 115,000 North Carolinians had a different party registration status among the big three (Democratic, unaffiliated, and Republican) at the end of 2021 than they did at the beginning. In addition, some Libertarians switched their party registrations, along with the fact that those registered with the Constitution and Green parties were changed to unaffiliated status.

Among the 115,000 North Carolinians who changed their party registration from the year's start to the end, the largest share were from registered Republicans. 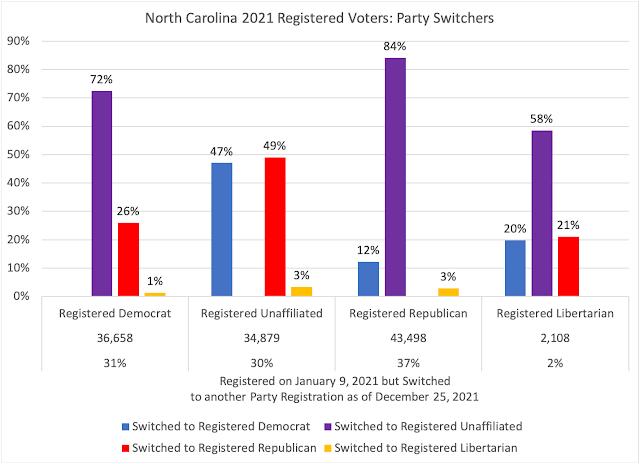 Monthly, the data clearly shows the aftermath of the January 6 failed self-coup and the flight from Republican Party registration in January and February. 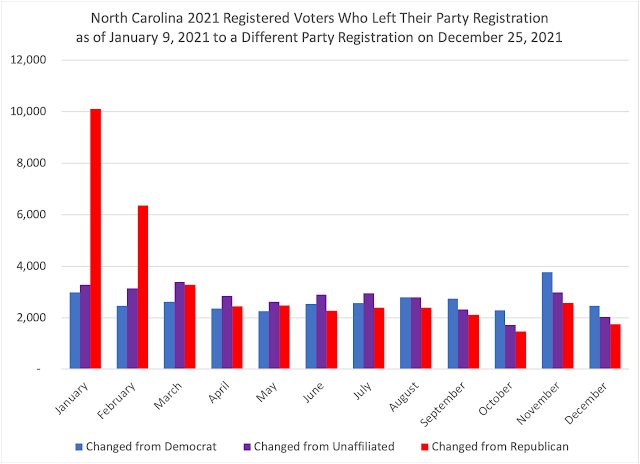 Among Republican switchers, the trends within each generation mirrored, for the most part, the overall trend: 80 percent plus in each cohort went unaffiliated, with ten to sixteen percent switching to Democratic registration. 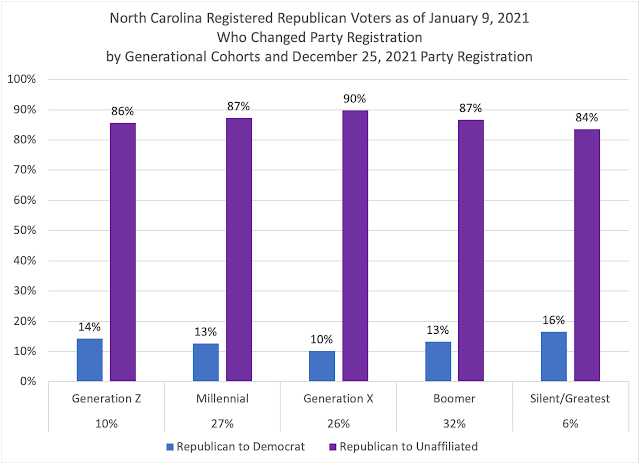 Among former registered Democrats, it was among older voters--Boomers and Silent/Greatest generations--who were more likely to switch to Republican party registration than unaffiliated. 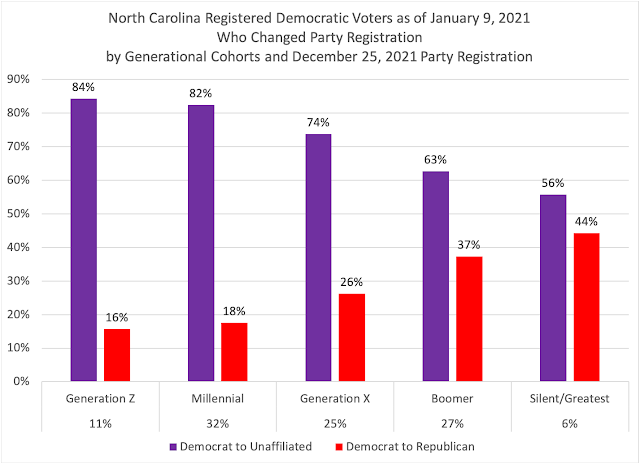 Conversely, younger voters who switched from Democratic registration were overwhelmingly likely to go unaffiliated, with less than 20 percent of them going to GOP registration.

It is among former unaffiliated voters--who almost evenly split between going to partisan registration--that a clear generation divide is evident. 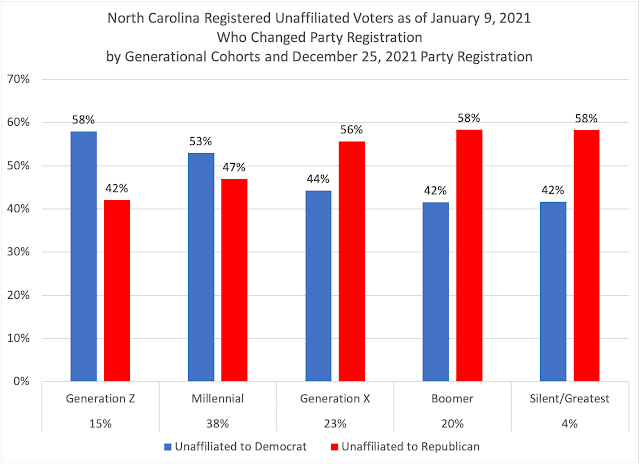 With what should be a competitive electoral year, most eyes are on the state's voter registration numbers come October and the subsequent mobilization efforts (which should be on-going for both parties) before the November general election.

But I'm more interested in the period April to before the (potential) May primary, and the big question that I'm asking: when do registered unaffiliated voters surpass Democratic registration to become the plurality block within the state's voter pool?

Taking as a conservative estimate the 2021 average monthly percentage gains for the big three registration statuses, and then projecting as the monthly changes in 2022, it would appear that the cross-over point for unaffiliated voters taking the lead should be in April. 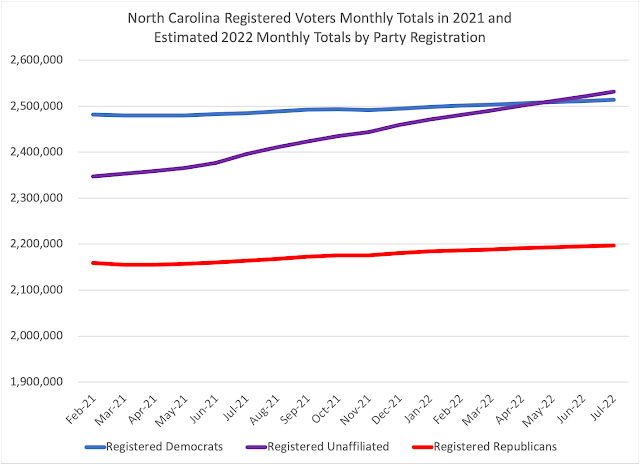 As I note above, this is a 'conservative' estimate, because we may see increased numbers in the run-up to May's (tentative) primary election. But it would appear that in the middle of spring, unaffiliateds should claim the mantel of largest group of NC's voters.

Time, and the state's new voters, will tell us when the transition will occur, and how the dynamics of the Old North State's politics will play out will also be determined in time. But as we prep for this year's primary and general campaigns, it's helpful to have a grounding on how the electorate--the most important part of the election cycle--develops towards November.

Dr. Michael Bitzer holds the Leonard Chair of Political Science and is a professor of politics and history at Catawba College. He is the author of Redistricting and Gerrymandering in North Carolina: Battlelines in the Tar Heel State, and tweets at @BowTiePolitics.