By Susan Roberts and Michael Bitzer

Recent attention to former President Donald Trump’s endorsement of Representative Ted Budd (R-NC 13) for the Republican nomination to North Carolina's U.S. Senate seat is instructive for several reasons. Beyond sending a cue to Republican primary voters of who the former president supports, perhaps most important aspect is the significance of NC as a battleground state and the fact that the seat could be one that determines control of the Senate itself.

But for both the Republican and Democratic primaries, important dynamics also weigh in on who will claim each party's nomination for what many consider a national race centered once again in the Old North State. We take a look at the general dynamics of mid-term elections, with an introductory focus on the primary battles shaping up in both parties for the 2022 contest.

Political scientists agree that in midterm elections, the sitting president's party generally suffers in both the House and the Senate. Two key explanations for this phenomenon usually drive mid-term election dynamics. One explanation points to midterms as a referendum on the president, as well as an evaluation of the state of the economy. Among other factors (such as the number of retirements and the political and economic dynamics next summer), presidential approval plays an important role. For presidents going into midterm elections, the higher their approval, the less likely they will get "a thumpin" as George W. Bush noted after his 2006 midterm, as demonstrated by these graphs showing presidential approval and the loss/gain of U.S. House and Senate seats. 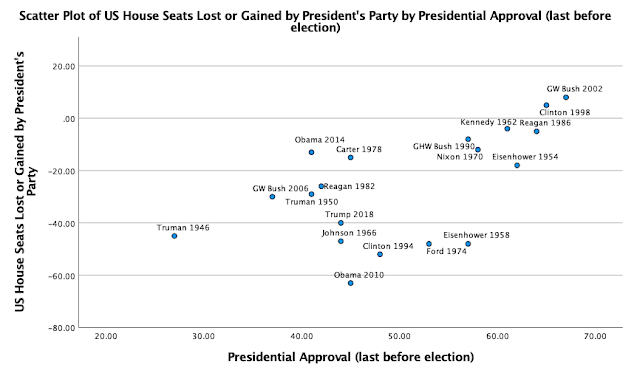 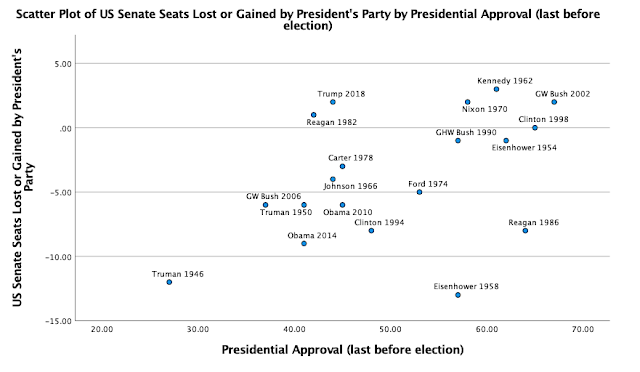 Another explanation includes the trend called “surge and decline,” based on the lower turnout in midterms as opposed to general elections. According to Emory University political scientist Alan Abramowitz, during the period between 1946 to 2018, Senate losses for the president’s party have ranged from losses of thirteen to gains of three seats. Abramowitz acknowledges the margin of error in his Senate model is sufficiently large enough in trying to predict election outcomes as to which party would control the evenly-divided chamber.

The politics of primaries

In general, primary elections create more problems for political parties and more opportunities for candidates. Dynamics of primaries, such as divisiveness in party factions, monies spent, lack of a party cues, and sometimes introduction of character/experience issues – which in turn may give opponent fodder for general election--create unique political environments that candidates have to wade through in order to secure the nomination.

Just as important as the dynamics of primary elections are the demographics of the primary voter. Voters in primaries are distinct in several significant ways. These voters tend to be better educated, wealthier, older, and better informed that voters in regular elections. Candidates need to take into account all of these considerations in elections that are guaranteed to generate lower turnout.

On July 20, 2016, Burr was in the final months of a campaign against Deborah Ross when he announced he would not seek reelection in 2022. Such a move was highly unorthodox, especially considering his rationale. Burr put it bluntly, saying “It’s real simple: I’m beginning to get old.”

With Deborah Ross portraying Burr as a Washington insider and herself as the “change” candidate, the aging argument against Burr might have worked, but in the end the race wasn’t as close as expected with Burr beating Ross by roughly six percent, a landslide considering the competitive nature of North Carolina's recent elections.

Typically, races with an incumbent seeking re-election give the party their best chance of retaining the seat, due to the inherent advantages that incumbents possess. Unless they face a major scandal or significant intra-party division (which NC provides an interesting recent example that we'll cover in a moment), incumbents have the name recognition, ability to fundraise, and demonstrate their ability to help their state or electoral district out with policy initiatives and sometimes pork-barrel politics.

However, with those advantages come potential challenges for incumbents, most notably thanks to the continued sorting of American political parties into homogenous coalitions: conservativism now reigns supreme in the GOP, while progressives and more left-oriented factions battle with moderate factions within the Democratic Party.

In 2019, it appeared that incumbent Thom Tillis was going to face an intra-party battle for his renomination. Much of the criticism within his own party stemmed from an op-ed Tillis wrote in February 2019 in which Tillis voiced his support for Trump’s border wall but disagreed with Trump’s use of the emergency declaration to do so. While Tillis backtracked on his argument and ultimately voted to uphold the president's declaration, he garnered a challenge to his renomination that was short-lived.

But when an incumbent decides to retire, or worse yet, loses their renomination, the seat swings to an open-seat contest, and the incumbency advantages are moot. Yet just because a U.S. Senate seat, or really any contest, is open doesn't necessarily mean that the seat will be competitive.

Other factors surrounding an open seat election need to be taken into account, and most notably nowadays, the political context of the state or electoral district the contest is being held in. Using Gallup's "State of the States," the political divide when it comes to partisanship can influence when open seat, state-wide elections are considered competitive.

Since 2008, North Carolina has been a consistently competitive state, with Republicans Donald Trump (by 1.3 points) and Thom Tillis (by 1.75 points) and Democratic incumbent governor Roy Cooper (by 4.5 points) winning in 2020's contests.

Both parties will be going into the 2022 general campaign looking for any advantages they can achieve for November's contest. But both parties have to survive competitive contests for the nominations in the primaries, and we give some introductory thoughts as to how both party contests are shaping up with almost a year out from the primary elections.

Potential Dynamics of the 2022 Democratic primary

As it stands now, the quest for the Democratic nomination includes three viable candidates: former Supreme Court Chief Justice Cheri Beasley, state senator Jeff Jackson, and former state senator Erica Smith. All three enjoy name recognition, but for different potential reasons. In a race that was only decided by 401 votes last year, Cheri Beasley lost her bid for election as the chief justice of the state's supreme court in 2020 to Republican justice Paul Newby. Having won a previous associate justice seat on the state's highest court, Beasley benefits from state-wide experience and name recognition, albeit for the branch of state government that fewer voters traditionally know about.

Erica Smith lost the Democratic nomination in 2020 to Cal Cunningham, where she garnered a little over a third of the primary vote. Jeff Jackson has been a social media-savvy legislator, thanks to his presence on Twitter and taking in a considerable amount of money in his early fundraising.

Beasley has the potential of a windfall of monies from Emily’s List, a group financing selected Democratic women candidates who are pro-choice and viable candidates. The group issued a press release proclaiming that Beasley “has blazed trails and shattered glass ceilings throughout her career” and has had “a track record of winning statewide.” Prominent in their endorsement is the fact that North Carolina has never elected a Black U.S Senator.

Potential Dynamics of the 2022 Republican primary

As noted earlier, Ted Budd secured the coveted endorsement by the former president in his bid for the GOP nomination. Trump has been keenly interested in several Republican nomination contests across the nation, and wants to utilize his following and support to garner candidates loyal to him.

There hasn't been much polling in either primary contest so far, so a poll conducted by the Budd campaign showed a potential Trump effect on the GOP race. When likely Republican primary voters were asked their opinion of the former president, 87 percent viewed Trump favorably, but only twenty percent had heard of Trump's endorsement at the recent state convention.

When those voters were first asked to rank their candidates, former governor Pat McCrory garnered 45 percent, compared to Budd at 19 and Mark Walker at 12 percent, with almost a quarter undecided. McCrory's tenure as governor and several state-wide campaigns likely helped in terms of the name recognition that often benefits front-runners.

But when told of Trump's endorsement of Budd and then asked again who they would support, Budd climbed to McCrory's level (46 percent), with McCrory dropping to 27 and Walker at 8 percent.

Dependent on how Budd uses this endorsement (through campaign ads or events featuring the former president) and how future polls capture Trump's influence on the primary campaign, the race to garner at least thirty percent of the primary vote to avoid a second/run-off primary could be attainable.

Hold On To Your Open Seats: It's Gonna Be A Bumpy Primary

Both races could show the internal dynamics of state party politics on full display, especially in candidates' messaging and framing of issues and policies. On the Republican side, does Trump wield his influence and continued favorability amongst the true GOP faithful (and likely primary voters) to play 'king-maker'? Or is the party looking for other viable candidates beyond Trump, but still supportive of Trumpism?

On the Democratic side: does North Carolina's primary battle become one of the classic moderate/centrist versus the progressive side of the party, and which candidate will represent either side? Or do the front-runners demonstrate a combination of both wings? And will state Democratic primary voters decide to make history by nominating a Black female as their U.S. Senate candidate?

The next year should give observers some real insights into the continued fluid dynamics and state of North Carolina's political parties.