The Slow Erosion of Swing Counties in North Carolina

Anyone with even a passing familiarity of American politics is well-aware of the "swing state" concept--the idea that most states are increasingly locked into one party or the other, whereas a small number of swing states can "swing" from one party to the other.
In the past few elections, there has been increasing attention on swing counties--counties (often situated in battleground states), that could swing from one party to the other, from one election to the next. As this brief post will demonstrate, North Carolina counties are increasingly red or blue and the number of "swing counties" is at an all-time low. This trend has important implications for polarization and for the future of North Carolina and American politics.
One way to examine swing counties in the aggregate is to look at the average shift in two-party vote share from from one election to another. The figure shows just that--each bar represents the average percent of the two-party vote share that swung from one election to the next. Starting from the bar on the left, we can see that the average county in North Carolina swung just shy of 12 percentage points from 1980 to 1984. Between 1984 and 1988, the average county swung just shy of 4 percentage points, and so on.
The take away is clear: county-level vote patterns shift less than they used to. From 2016 to 2020, the average county shifted less than 2 percentage points--the smallest shift since at least 1984. What this means in practice is that each county is increasingly locked into their vote choice. At the county-level, elections in North Carolina are increasingly stable from one election cycle to another. 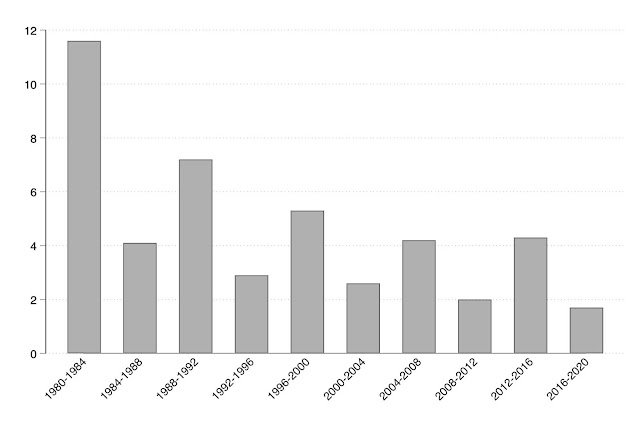 Another way to understand the stability of county-level voting patterns is to look at the number of counties that shifted partisan allegiances for President from one election to the next. As the figure below suggests, county swinging used to be as reliable as a Phil Ford jump shot (if you're a State fan, feel free to insert Chris Corchiani for Phil Ford; if you're a Duke fan...well...I can't help you there). From 1972 to 1976, 83 of North Carolina's 100 counties shifted their partisan choice for President. That number has been declining ever since. Between 2016 and 2020, only three counties "swung" in terms of the majority of their partisan allegiances--the smallest number of swing counties during this entire time period. 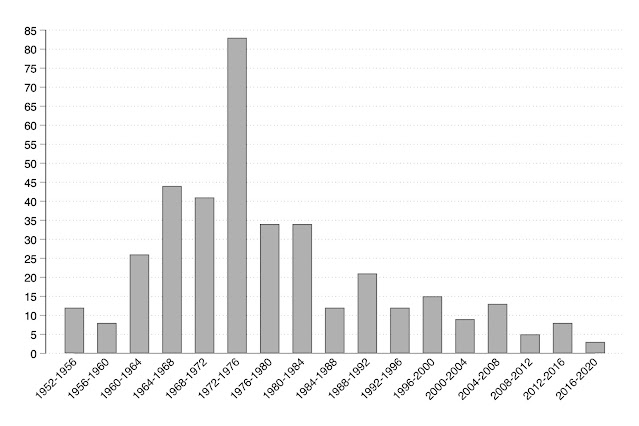 For those curious about the specifics of the last few election cycles, the table below lists the swing counties for each election cycle since 2000. As you can see, Nash has been the swingiest county in North Carolina over the past few cycles--flipping from Republican 2008 to Democrat in 2012, back to Republican in 2016 and back to Democrat again in 2020. It may also surprise some folks that urban counties that are currently considered bright blue such as Buncombe, Guilford, and Mecklenburg swung in the early 2000s (a curiosity that I will return to in a future blog post).

All together, this brief investigation of county swings suggests that swing counties are declining in number in North Carolina, and the partisan shift from one election to the next is the lowest it has been in many years. North Carolina is a state that is defined by geographic polarization and increasingly reliable voting patterns, which combine to create a state that is both divided and competitive.

Chris Cooper is the Madison Distinguished Professor of Political Science and Public Affairs at Western Carolina University. He tweets at @chriscooperwcu.