It surprisingly difficult to keep track of all of the elections in North Carolina. Sure, most interested citizens know that Roy Cooper and Thom Tillis were re-elected. Many are probably aware that the Republicans maintained majorities in the General Assembly and some (the type of folks who read this blog) may even be aware of the results of the Council of State and the statewide judicial races. Unless you’re buried deep in the weeds, however, you’re unlikely to know much about what happened in the County Commission races outside of perhaps your home county.

One reason for this gap in knowledge is that it’s hard to keep track of all of them—there are 100 county commissions and more than 500 county commissioners, and they have different term lengths, structures, and constituencies. Fortunately, the North Carolina Association of County Commissioners tracks and organizes all of this, and even places it online where it can be easily downloaded and analyzed by Political Scientists who are avoiding the pile of grading that sits before them (not that I know anyone who fits that description).

Why Should You Care?

County Commissioners make some of the most important decisions facing North Carolinians. Issues related to zoning and planning, soil and water conservation, public health, and a host of other policies are decided at the county level. While every North Carolinian does not have a city councilor (because some people do not live in municipalities), everyone in the state is represented by county commissioners. In addition to the importance of their policies, county commissions can provide the farm system for state and national politics--giving us a sense of what the next generation of elected officials in North Carolina might look like.

While understanding the patterns in these data is important, that does not mean that they should be taken as a sign of what North Carolinians think in the aggregate. Counties do not have equal population--far from it. Jones County's ~9,400 citizens have 7 county commissioners as do Wake County's ~1.1 million citizens. In the data that follow, all 14 of these commissioners are treated equally, when clearly that's not the case.

It's also important to remember that, as opposed to the General Assembly, or the US Congress, County Commissions do not act as "one body," but rather as 100 separate and autonomous commissions. The analysis that follows is thus important for understanding local government in the Tar Heel State, but please do keep in mind these critical limitations that are "baked in" due to the way population is distributed across the state, and the relative autonomy of each county. It's also worth noting that four commissions will have vacancies due to death (in one case) and sitting commissioners winning election to higher office (in three cases).

Taken as a whole, partisanship in County Commissions continued to slide away from Democratic dominance that defined local politics in North Carolina during the 20th Century. Today, Democrats hold 39% of the 587 County Commission seats in North Carolina, and enjoy majority control in 37 of North Carolina's 100 counties (a net decline of 2% and 4 counties, respectively, from 2018). Republicans gained the majority in 5 counties (Caswell, Franklin, Lee, Montgomery, and Robeson), while Democrats gained the majority of the county commission seats in Guilford for the first time since 2010. These patterns are represented in the graph below.

The graph also shows the number of counties where Democrats control all of the seats, yet another trend where the days of Democratic dominance over county commissioners is less and less apparent. Republicans, in contrast, currently have unanimous control of 40 of the state's 100 county commissioners. 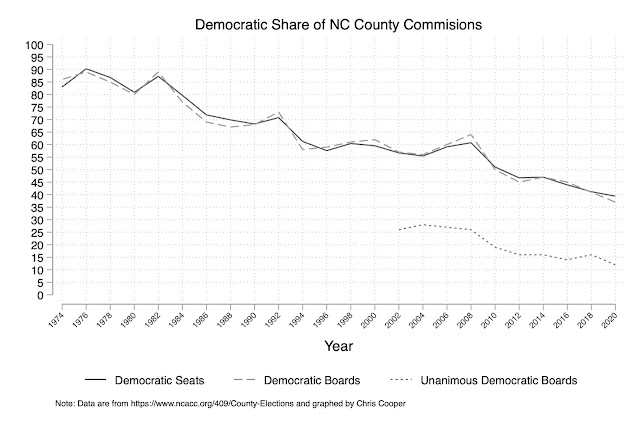 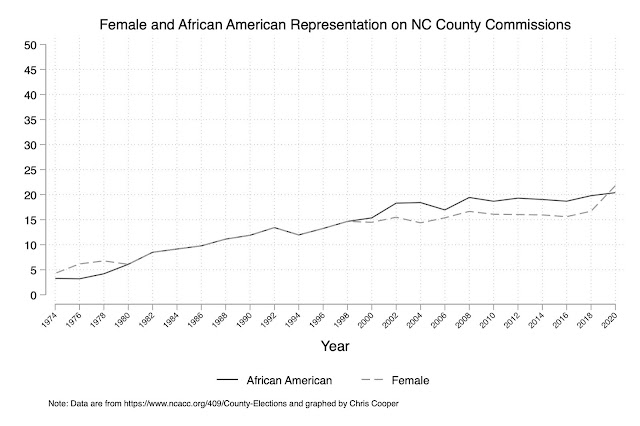 While county commissions do not provide an indication of the will of the people writ large, examining the patterns in office holding at the county level do give us a better sense of how North Carolinians are represented at this critical level of government.