The Fate of Appointed Senators

The runoffs for Georgia’s two Senate seats are attracting national and even international attention since, for the first time in history, the outcome of a delayed selection process will determine which party controls that chamber.  Georgians are selecting two senators because of a partial term that must be filled.

This is not the first time that the Peach State has chosen a senator to complete a term.  Since the 17th Amendment shifted senator selection from the state legislature to a vote by the public, five previous midterm vacancies have occurred beginning with Senator Augustus Bacon’s death in 1914.

How a Senate vacancy gets filled varies among states.  In Georgia, the governor appoints a fill-in who serves until the next regularly scheduled election.

Three gubernatorial appointees opted not to compete in the election held to choose a permanent replacement.  One of these, Rebecca Felton, holds the distinction of being the first woman to serve in the Senate.  She also holds the record for the shortest tenure.  Felton succeeded Tom Watson and was named to the Senate on October 3, 1922.  However, the Senate was not in session and did not reconvene until November 21.  By that time, Walter George had been elected to the remaining years of Watson’s term.  George delayed his swearing in for a day to allow Felton to become a member of the Senate and during her brief tenure, she gave a speech.  Felton was 87 when sworn in and became the oldest person to serve in the Senate up to that time.

Another appointee who passed on the election to choose a replacement, John Cohen, was a place holder for Governor Richard Russell who appointed him.  Russell, perhaps aware that governors who tap themselves for Senate vacancies are usually rejected by the public, finished his term as governor before launching a 38-year career in the Senate.

A death cleared the way for Russell to get to the Senate where he served as the leader of the bloc of Southern Democrats.  Russell’s own death in 1971 led to the appointment of David Gambrell by Governor Jimmy Carter.  Gambrell had served on Carter’s legal team in 1962 when a county boss had tried to steal the state Senate election that launched the future president’s career.  When Gambrell sought to win a term, 14 challengers came forward including a civil rights leader and a neo-Nazi segregationist.  Gambrell led the Democratic primary with 31% of the vote but lost to Sam Nunn in the runoff.

Of Georgia’s appointed senators, only Zell Miller, who succeeded Paul Coverdell in 2000, won an election to extend his tenure.  Miller got 58% of the vote, easily defeating former senator Mack Mattingly.

While individuals sent to the Senate by their governors have not fared well, none of the previous appointees who sought to prolong their Senate service did so with the attention and campaign spending lavished on the seat that Kelly Loeffler is defending.  Another difference is that none of the appointed senators had the personal resources available to Loeffler, widely believed to be the wealthiest member of Congress. 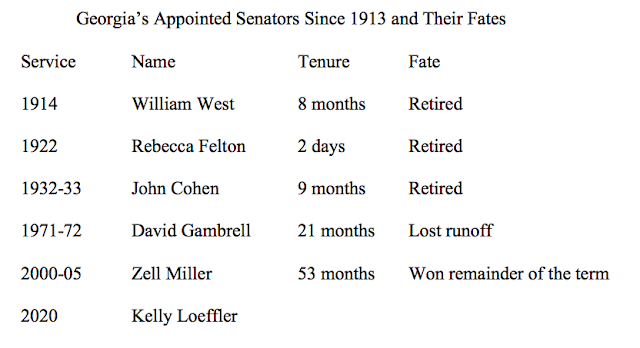 Charles S. Bullock, III, is the Distinguished University Professor of Public and International Affairs at the University of Georgia.  He is co-author of The Three Governors Controversy, a history of Georgia’s contested 1946 gubernatorial contest, an election like Georgia’s current Senate seats that was not resolved until months after the initial vote. This article was reprinted with permission; all rights reserved.