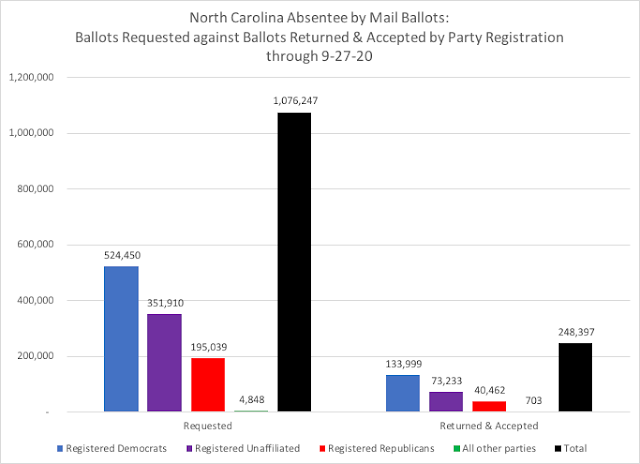 Meaning, nearly five times the number of NC voters have asked for a vote-by-mail ballot compared to the total ballots four years ago. 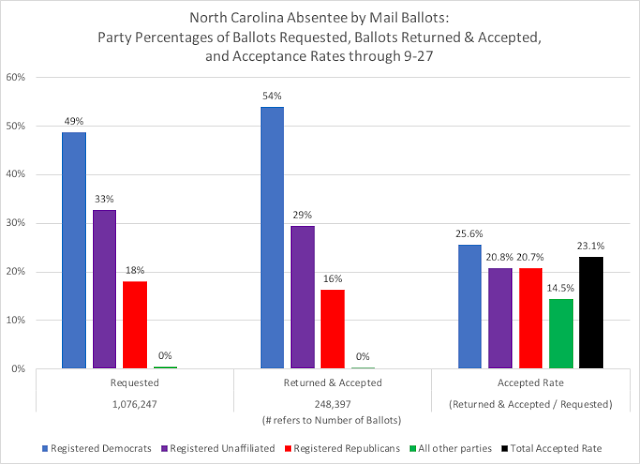 One aspect that I looked into was the percentage of NC's registered voters who have asked for, and those who have returned and had accepted, an absentee by mail ballot.

As of September 26, NC's number of registered voters stood at 7,138,817 (active, inactive, and temporary registration status). Of that 7.1 million, the one million requested ballots represents 15 percent of the state's total voters. 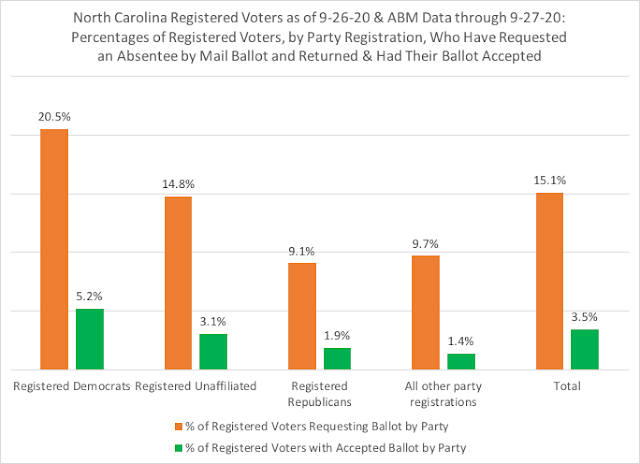 However, within party registrations, 20 percent--or one in five--of all registered Democrats have requested an absentee ballot, compared to under 10 percent of registered Republicans, with registered Unaffiliated voters exactly between the two, at almost 15 percent of their total registered voters.

Of the ballots returned and accepted, 3.5 percent of NC's registered voters have made up their minds and cast their vote choices. In other words, the election is over for these voters, even before the first presidential debate has been held.

For these voters with returned and accepted ballots, they are electorally 'done' and are merely spectators as to what unfolds in the home stretch to November 3.

In looking at the dynamics of these accepted ballots, a stark comparison emerges between what we saw on this date in 2016 versus what we see today.

The total, on the 38th day out from Election Day, shows the 2020 accepted ABM ballots are 17 times ahead of where things stood this same day in 2016. 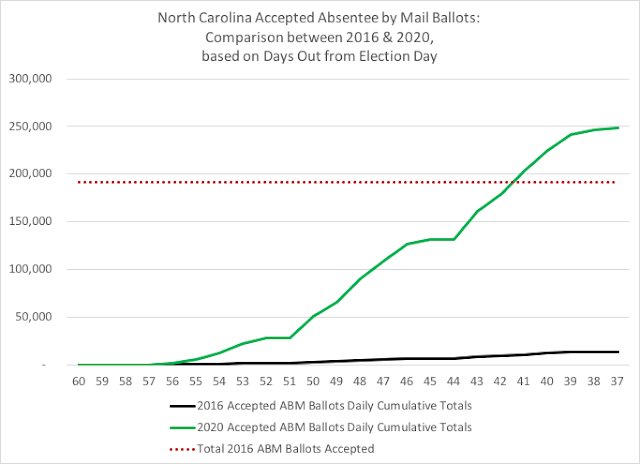 And not surprising, the registered Democratic advantage this year is striking compared to the almost even split between partisan registered voters four years ago. 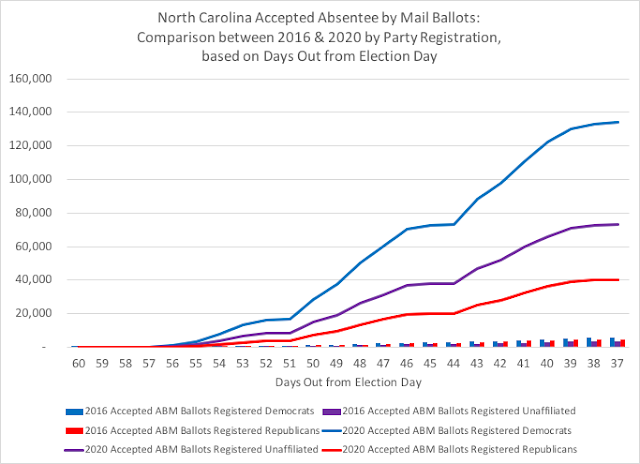 Yes, registered Democrats are significantly ahead in utilizing this vote method, but a significant number of these ballots are coming from voters who participated in 2016's election by voting in-person, either early (called absentee onestop in North Carolina) or on Election Day. 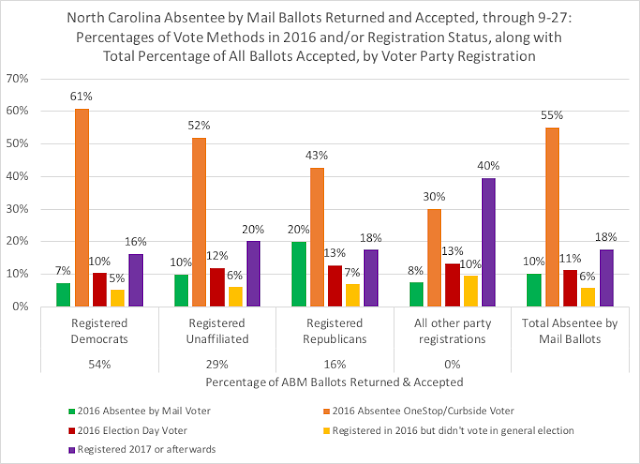 Overall, two-thirds of the current returned and accepted NC absentee by mail ballots have come from voters who cast in-person votes (either early or on Election Day) in 2016.
But among registered Democrats, that percentage is 71 percent, with 7 percent having voted by mail as they did four years ago. Of the remaining 2020 mail-in voters, five percent of registered Democrats were eligible, but didn't vote, in 2016, while 16 percent registered after the 2016 election.
In comparison, twenty percent of registered Republicans have used the same vote method that they did back in 2016, while 56 percent are 2016 in-person voters. Among registered Unaffiliated, 10 percent voted by mail in 2016, with 64 percent of them having voted in-person. Six percent didn't vote in 2016's election but were eligible to do so, while twenty percent registered after that election.

So are registered Democrats and unaffiliated voters "cannibalizing" their voters who are likely to cast ballots? That's one way to look at it; another way is that these are likely very partisan (even among the unaffiliated) voters who want their votes banked and don't care about what happens during the rest of this election; as I noted earlier, they are "done" with this election.

As we get into the heat of the electoral battle this month, and with presidential debates and a contested Supreme Court nomination fight to highlight an already bitterly divided electorate, these numbers may provide a sense of where things are heading.

But to gauge anything more until the voters have completely spoken on Election Day, and the results are fully compiled and certified, is a fool's errand this year. But again, as I noted earlier: it is 2020, after all.