What might presidential coattails, or voter loyalty, mean in 2020 in North Carolina?

In a recent Politico article on "Swing-state Republicans warn Trump's reelection is on shaky ground," former NC Governor Pat McCrory observed "the concern is: Will he have coattails for the other offices, from Senate to governor and other important races?" Geoffrey Skelley at FiveThirtyEight.com also looked at the effect of presidential coattails on a variety of down-ballot contests through various studies by political scientists. He comes to the conclusion that while presidential coattails can certainly help down-ballot party candidates, the inverse may be true as well: the president could bring down those lower-ballot candidates as well.

For most political scientists and historians of American politics, the concept of presidential coattails is that the 'top of the ticket/ballot,' that is the president, would bring in lower-level candidates (U.S. Senate and House candidates, for example) who might not have been able to win on their own accord. In other words, presidents could potentially drag their party's candidates across the finish line to victories in the general election.

With the increase in partisan loyalty of American voters, one of the key questions asked about voter behavior is whether the top of the ticket is bringing in the votes for lower level office candidates of the same party, or could the top of the ticket represents voters who vote 'straight party' down the ballot?


From the 1980s to the early 2000s, North Carolina did experience the "split ticket voting" phenomenon, most notably in the 2004 election, where Republican George W. Bush won the state by 13 percentage points, and Democrat Mike Easley won the gubernatorial contest by that same margin. By this example, Bush's coattails didn't drag the Republican gubernatorial candidate across the finish line.

However, in our post-2008 political environment, there is a more polarized and 'nationalized' electorate, with party loyalty becoming a greater predictor of voting behavior. For example, in 2016's election in North Carolina, an extremely strong relationship existed between the vote for president (Trump) and the vote for a (Republican) congressional candidate. 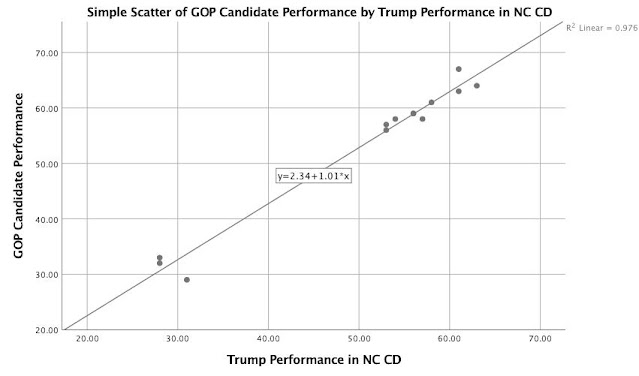 Of course, there's only 13 congressional districts in the state, so that may give us limited understanding; what about for the state senate (50 districts, or dots) or the state house (120 districts/dots)?

For the relationship between Trump's performance in a state senate district and Republican candidates for state senate in 2016's general election, the r-squared value came in at 0.953. 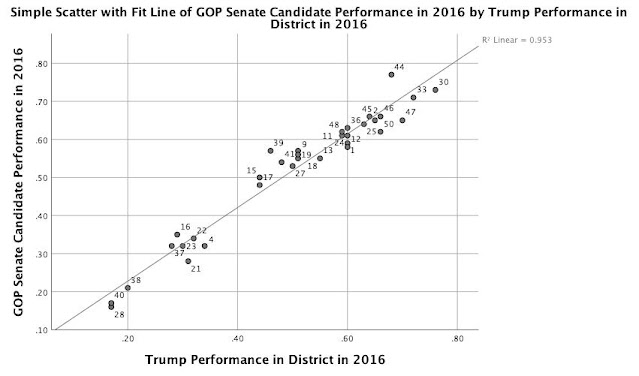 However, in the state house, the 2016 relationship was slightly less between Trump's performance in a state house district and the Republican candidate, only at 0.82. 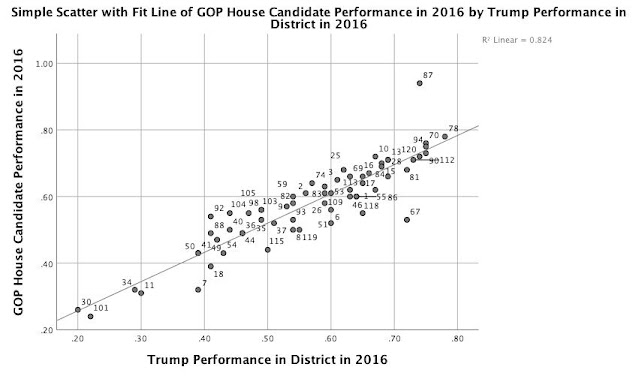 In 2018's election, however, the state house and senate districts were redrawn due to the partisan gerrymandering case. Could the 2016 vote patterns show a relationship in 2018's election?

In taking the 2018 new districts and reallocating the votes for Trump in 2016 to the new precincts, a new set of scatterplots were run to see if the relationships between Trump's 2016 vote in the new districts came close to aligning with the 2018 Republican candidate votes for the state house and senate.

In the revised state senate districts, the relationship (as measured by the r-squared value) was 0.972, almost a perfect explanation between the Trump 2016 vote in the new senate district and the vote percentage that the Republican state senate candidate received: 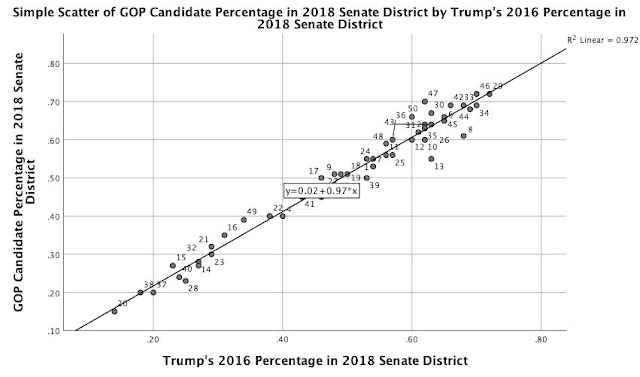 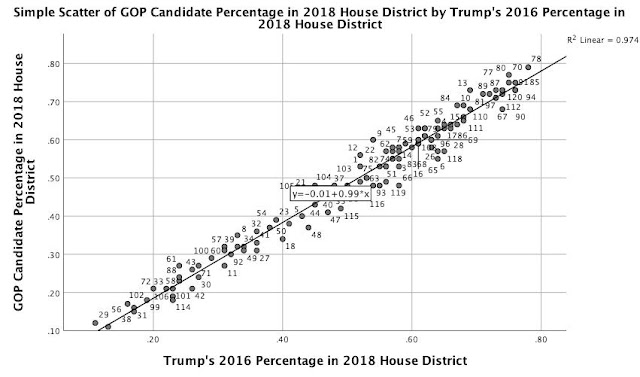 In taking the 2700 precincts in the state and looking at the relationship between the presidential and U.S.  Senate and gubernatorial contests, the dots and lines tell a pretty striking story of voter behavior:

First, for the 2016 Trump-Burr relationship within North Carolina's precincts: 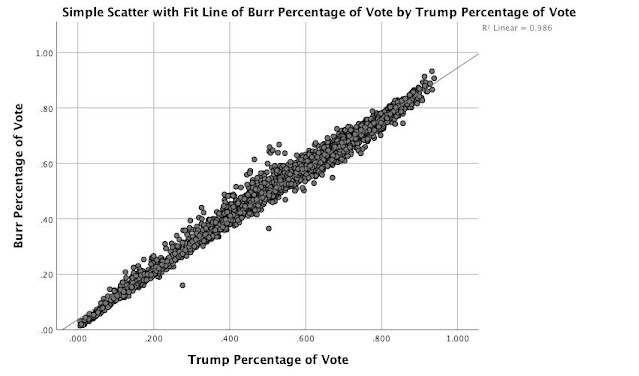 The r-squared value is 0.986, meaning the relationship is almost a perfect match between Trump's vote in a precinct and Burr's vote.

For the 2016 Trump-McCrory relationship within precincts: 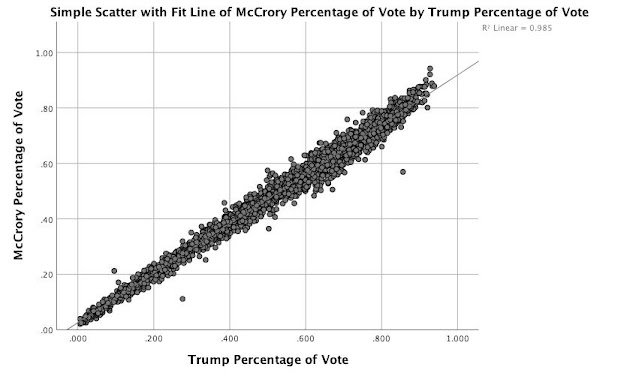 So what does this say about North Carolina voter behavior? At least in 2016, party loyalty appears to dictate a great deal of voting from the top down the ballot, and that potentially, the vote for the president can serve as a proxy for how other party candidates perform as well.

For 2020, there is the expectation that this party loyalty, and partisan divide, has done nothing except strengthen among certain groups. The key may be what, if any, defections occur among some key voting blocs, one of them being based on the regions of the state.

In a recent presentation to the Levine Museum of the New South on the history of Republican Party in North Carolina, I ended with a series of charts about where the strength of the NC GOP is located, by modern 'regions' of the state (namely, central city precincts; suburban precincts within urban counties; surrounding suburban counties; and rural counties).

I took each of the following candidates and contests--Tillis in 2014's US Senate, Trump in 2016's presidential, Burr in 2016's US Senate, and McCrory in 2016's gubernatorial--and looked at their overall performances in these four regions compared to their state performances (which was 48.8 to 51.1 percent). 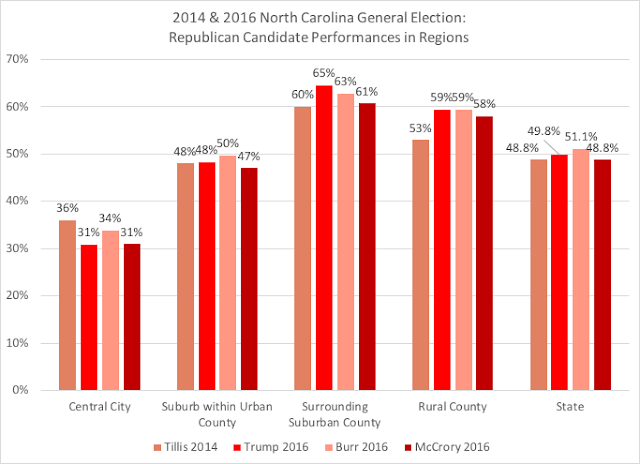 In the most urban areas of the state--the central city precincts--Tillis in 2014 received the highest percentage of Republican support, at 36 percent. In 2016's election, Trump and McCrory received the lowest, at 31 percent, while Burr received 34 percent.

In the suburbs within urban counties, the alignment between the four candidates is remarkable similar, with only Burr hitting 50 percent, while the other three Republicans are at 47-48 percent.

It is in North Carolina's surrounding suburban counties where Republicans see their greatest performance, and where Trump actually exceeded the other Republican candidates: 65 percent to either 60 percent for Tillis, 61 percent for McCrory, and 63 percent for Burr.

In what many observers believe is the most Republican part of the state, rural counties, Republicans do well, but not as well as in the surrounding suburban counties. Tills in 2014 received only 53 percent of rural county votes, while Trump, Burr, and McCrory in 2016 received 58 to 59 percent.

While voter loyalty may be very present again in 2020, one of the key questions in my mind is "what about both voter loyalty and voter intensity?" especially towards the president and the effect on down-ballot contests.

The best way to answer that question will be on November 3, 2020, but a potential hint of what we might see could come from the 2019 special election for the North Carolina Ninth Congressional District.

In 2018, Republican Dan Bishop ran for re-election in his state senate district 39, and was the only Republican re-elected to his General Assembly seat from Mecklenburg County. In 2019, he was the Republican congressional candidate for the vacant Ninth District, and won by two points in what had been considered a fairly safe Republican district.

In the NC Ninth, Bishop's former state senate district 39 is within the congressional lines, making a comparison between Bishop's performance in 2018 and 2019 possible for the precincts within both legislative districts. Also, these precincts (in the light blue of the below map, showing State Senate District 39) could be classified as either urban (south Charlotte) and suburban within an urban county precincts: 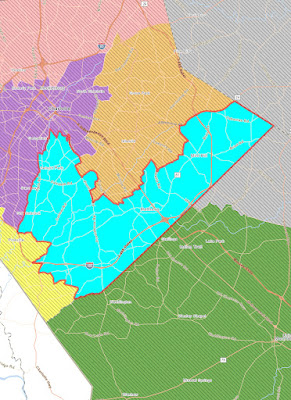 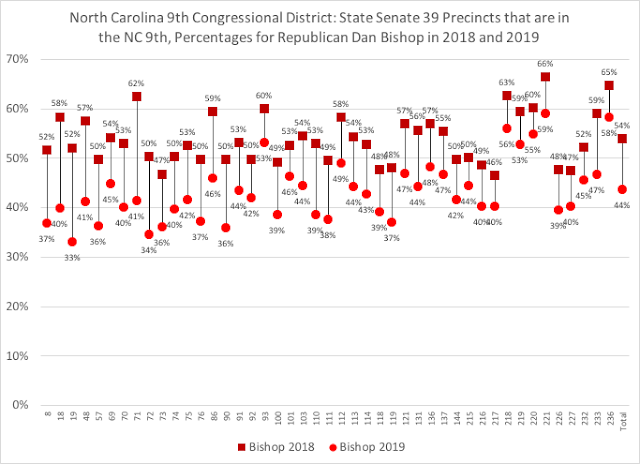 Moving beyond the urban dynamics, in neighboring Union County (a surrounding suburban county, to the east of Mecklenburg County), Donald Trump received 63 percent of the 2016 presidential vote, while Mark Harris (the Republican 2018 congressional candidate for the NC Ninth) received 59 percent and Dan Bishop received 60 percent of the 2019 vote in the county.

This, to me, poses some key questions for this November: if Union County is an indicator of strong GOP surrounding suburban counties, and in the two elections since 2016, Republican candidates saw a drop of between 3 and 4 points in comparison to Trump's 2016's performance in that strong GOP surrounding suburban county, can the president make up that drop and still be competitive in the state this fall, which he won by only 3.6 percent four years ago?

And can that competitive 3.6 percent state-wide margin of victory withstand urban suburbs defecting from the GOP to the tune of potentially ten points?

In other words, are presidential coattails not just an asset to 'drag' the party's lower-ballot candidates across the finish line, but can they be a negative 'drag' and weigh down their party's candidates as well?

Only on November 3 will we be able to answer those questions.
By OldNorthStatePolitics.com - May 27, 2020