Some thoughts on Super Tuesday

So, it's finally here: Super Tuesday, the March 3 primary elections in North Carolina and thirteen other states, especially California and Texas (with bigger Democratic delegations than North Carolina).

As I await the polls closing at 7:30 PM and then see the returns come in, some questions and thoughts about Super Tuesday that I'll be looking for tonight and tomorrow:

Question 1: what is North Carolina's split between early and Election Day results?


With a 29 percent increase in Democratic primary ballots coming in (over half-a-million) this year over 2016's Democratic primary contest between Clinton and Sanders, a critical aspect that I'll be looking at is (of course) turnout today.

Will we see a similar turnout rate among registered voters of 35 percent as we saw in 2016, or could it be higher?

If the pattern of 2016 repeats in terms of early votes versus Election Day votes (1/3 to 2/3), could we see more than a million votes come in today on the Democratic primary side? That million, plus the half-million cast early, would put 2020 above the 1.1 million ballots cast in the 2016 Democratic primary.

And as a reminder, here's how the vote methods resulted in for the candidates in 2016: 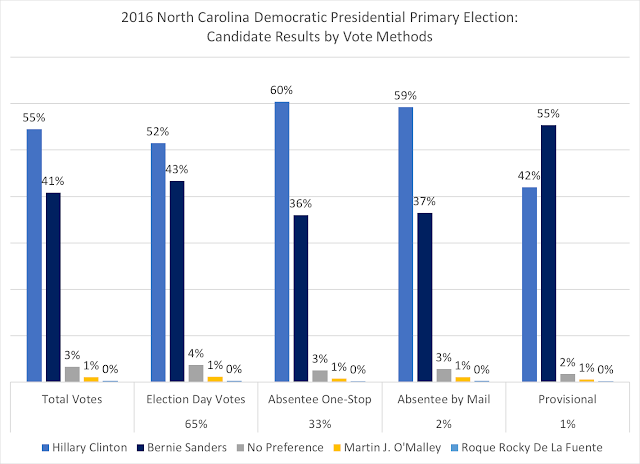 Question 2: the obvious--who shows up?


Of course, a lot of questions will be asked about who showed up in the Democratic primary, and we won't know exact percentages or numbers until the state board of elections releases the voter history data file for this primary election. But in comparison to 2016's primary, among early votes, white voters were up, black/African American voters were down, and voters of all other races were up. So the overall mix of early ballots coming in was a slightly whiter electorate than in 2020: 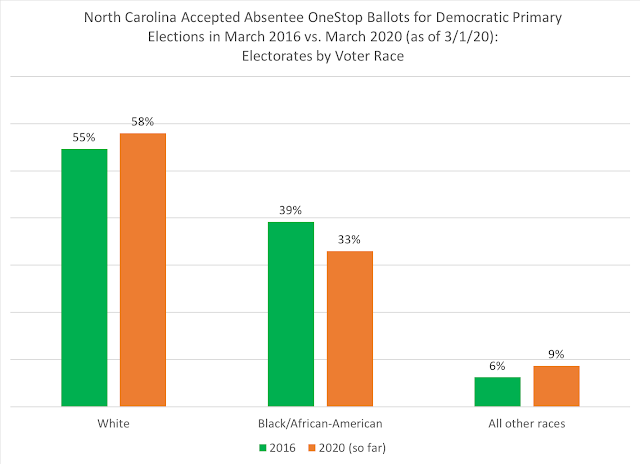 Of course, what may be key to today's racial dynamics is the fact that South Carolina's primary results were known after early voting in North Carolina concluded. That one effect, along with what appears to be a significant momentum push to Biden, will be important to watch for in tonight's results.

What will be critical to watch today specifically is the racial breakdown of voters, most likely gauged through what appears to be an exit poll from Fox News.

In 2016's Democratic primary, what we saw was an overall electorate that was 36 percent black/African American, 57 percent white, and 7 percent all other races. But in looking at the vote methods used by different races, there were some key differences. 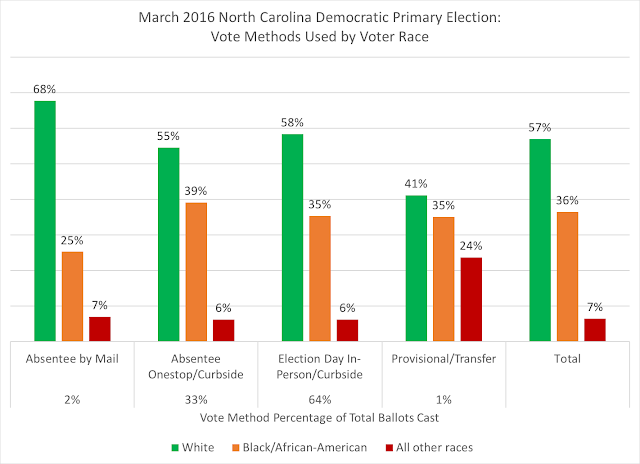 Absentee onestop/curbside (i.e., early voting in person) was 45 percent voters of color, compared to this year's 42 percent. One hypothesis/guess as to why the lower rate this year was that the key Democratic voting group of black voters were waiting to see how Biden would perform in South Carolina. It may be important to see if today's voting exceeds the 35 percent black voting as it was in 2016, and that could be a strong signal of Biden having a good evening.


Question 3: where is Bernie Sanders' support this time around?

In 2016, Hillary Clinton won North Carolina with 54 percent of the vote, compared to Bernie Sanders with barely 41 percent. But what was interesting was where Sanders performed well in the state: it was notably in the mountains of the western part of the state.

With the exception of Buncombe County, home to the liberal city of Asheville, and Watauga County, home to Appalachian State University, the mountain counties of the west delivered very small numbers of votes, delivering anywhere from about 1,500 to 10,000 total votes per county. Sanders also barely won Orange County (the beige county in the middle of the state) and Dare County (on the coast).
As the results come in tonight, I'll be watching some key counties: Wake (with Raleigh), Mecklenburg (with Charlotte), Guilford and Forsyth (Greensboro and Winston-Salem), Orange (with Chapel Hill and parts of Durham), next door Durham County, and Buncombe County (with Asheville). And do those counties exceed the number of votes from 2016? Here are the top ten counties from 2016's Democratic primary in terms of total votes, each county's total votes cast, and the results between Clinton and Sanders:


I'll be watching Sander's percentages in these counties today to see if he can meet, exceed, or drop below these percentages from four years ago.

The other key aspect to watch with these counties: the last column shows what has been cast in early votes in each of these counties, compared to the county's 2016 total ballots cast. New Hanover and Buncombe are well over half of the ballots cast in 2016's Democratic primary just based on 2020 early ballots. Again, it could be that these early voters were going to cast ballots no matter what, and decided to do so early, and there could be a smaller portion of ballots coming in those counties from today's voting. But something to watch.

Question 4: when will we know who really won North Carolina, in terms of Democratic delegates?


While everyone will be fixated on the popular vote totals for tonight's results, it's important to remember that the real number is 110 on the Democratic side: 110 pledged delegates to the nominating convention, with another 12 delegates who are 'superdelegates.'

The 110 delegates will be awarded proportionately, if a candidate gets 15 percent of the vote, both state-wide and within the thirteen congressional districts, with 24 awarded across the state, District 4 getting 9 delegates, and Districts 2 and 12 getting 8 delegates each, with the remaining districts getting lower numbers of delegates.

It may be a few days, with counting absentee ballots and processing, to learn the true winner of tonight's North Carolina Democratic primary, but we should have a good sense of who will get the majority of the 110 delegates, with the remaining districts getting fewer delegates. A great explanation and resource for all the states is the Green Papers website.

Question 5: what will happen in some key down-ballot races on both the Democratic and Republican side of the primary election?


It's not just the Democratic presidential nomination contest that will be determined with today's results, but also a Democratic nomination battle for the U.S. Senate, the Republican nomination for governor, open-seat nominations for the US House (Districts 2, 6, and 11), and lower-level races that may see a second primary/runoff election to determine the nominee.

Questions 6 & beyond: is Biden's South Carolina surge real, especially in California and Texas? And what else might happen today?


Beyond North Carolina, some key states are having their contests, and some questions I'll be watching for answers tonight are:

Enjoy the evening, and then get some rests: while they may not be 'super', we will have some exciting Tuesday elections coming up in the not-too-distant future.
By OldNorthStatePolitics.com - March 03, 2020