Democrat McCready took a R+8 (designated by Charlie Cook's Partisan Voting Index) and a Trump +12 (he carried the district 54-42 over Clinton in 2016) and made it a close contest. But the political environment showed that even within some highly unusual conditions (the 2018 election called into question due to ballot fraud and a September general election coinciding with Charlotte City Council primary elections in an odd year) that voter partisan loyalty managed to keep the district Republican.

In Union County, the strong Republican surrounding suburban county to Charlotte, both Mark Harris, the 2018 Republican, and Bishop secured 60 percent of the vote. And within Union’s precincts, Harris’ vote percentage and Bishop’s were closely aligned, as evidence by this scatterplot: 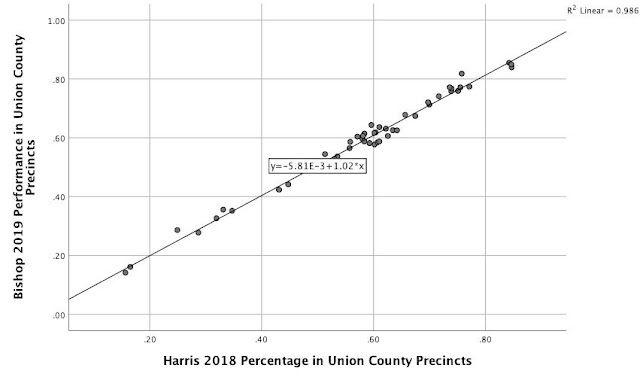 Bishop’s precinct vote relationship to Harris’ precinct percentages is remarkably strong; the adjusted r-squared value is 0.986, with a 1.0 being a perfect relationship between the two.

And it wasn’t just in a strong Republican county that saw voter loyalty. In the growing Democratic county of Mecklenburg, its southern Charlotte portions and suburban areas in the Ninth, Harris’ precinct vote percentage and Bishop’s is remarkable again: 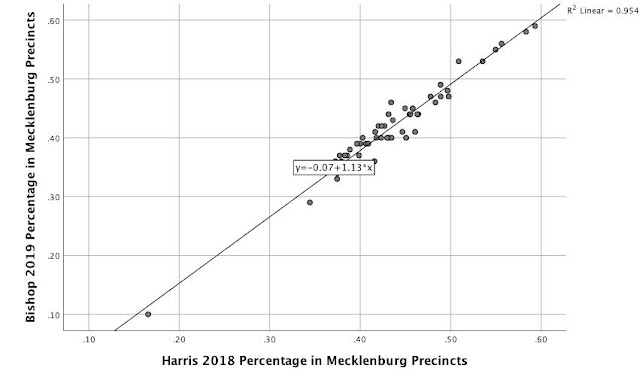 Political scientists have remarked about the partisan loyalty of American voters. While 2018’s Ninth election saw a registered voter turnout of 53 percent compared to 2019’s registered voter turnout of 37 percent, the close relationship between one Republican candidate’s performance in a precinct to another Republican candidate’s performance just ten months later demonstrates that loyalty.

As the nation heads into another competitive campaign, voter behavior will likely demonstrate that partisan loyalty amongst the ‘troops’ is a key facet of the 2020 election.

The nation’s divide between urban and rural counties is evident in North Carolina, and this week’s Ninth congressional district election showed that Mecklenburg County’s once urban/suburban Republican strongholds are moving more in line with other national urban counties in Democratic dominance.

South Charlotte and several suburban towns in Mecklenburg anchor the Ninth’s western portion. Referred to as the CharlotteGOP “wedge,” this area was a Republican stronghold, but has transitioned into competitive, and sometimes leaning Democratic, precincts.

To test this idea, this chart traces Mecklenburg’s precincts in the Ninth and their Democratic percentages in the 2014 U.S. Senate election, the 2016 presidential election, and the 2019 congressional election. 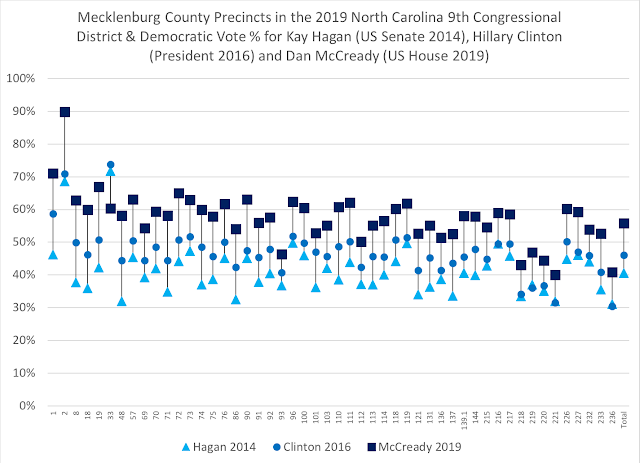 All but one of the 50 Mecklenburg precincts in the Ninth increased their Democratic vote share between each of the three elections, with Democrat Kay Hagan getting an average of 41 percent of the 2014 U.S. Senate vote, Hillary Clinton securing 46 percent of the 2016 presidential vote, and Dan McCready getting first 54, and then 56 percent of the vote in the 2018 (not shown above) and 2019 elections.

The NC Ninth may give some clues about 2020, but there were unique dynamics in 2019.

While rural areas are described as GOP country, and the 2019 Ninth district election has its fair share of rural counties outside of urban/suburban Mecklenburg and suburban Union County, one North Carolina exception to the national trend of rural politics is the strong presence of voters of color, including the Ninth.

Traveling east out of Mecklenburg and Union counties, one finds very rural counties of Anson, Richmond, Scotland, Robeson, and Bladen, before ending up in the more urban/suburban Cumberland, home to Fayetteville. 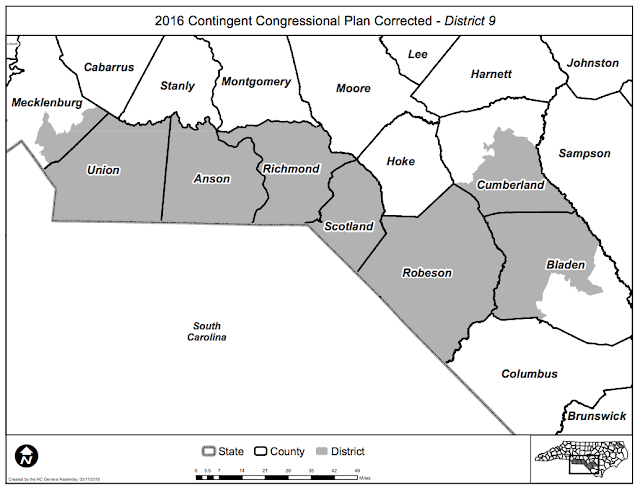 Robeson County presents a unique voter population: 29 percent of that county’s registered voters identify as white, 28 percent as black/African-American, and 35 percent as American Indian, the Lumbee Tribe, a NC-recognized tribe.

In Robeson's precincts with at least half of its registered voters identifying as American Indian, a noticeable electoral shift occurred between 2018 and 2019. The following chart gives McCready’s 2018 (dark blue) and 2019 (light blue) precinct performances in these majority-American Indian precincts. 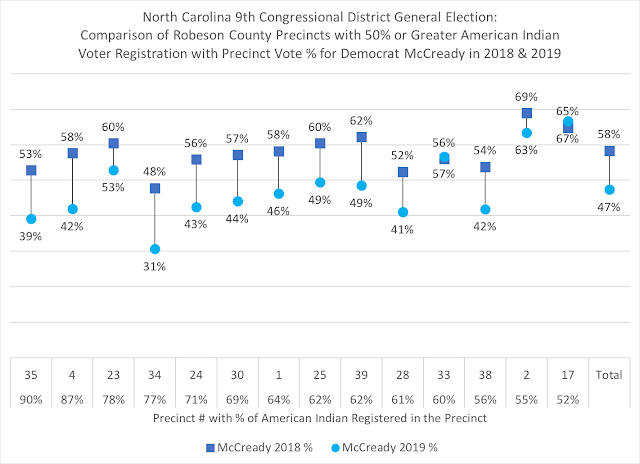 These precincts went from an average 58 percent for McCready 2018’s bid to 47 percent support in 2019, a drop of eleven percentage points. In those precincts with less than 50 percent American Indian registered voters, McCready dropped from 56 percent to 51 percent, only five percentage points, with many precincts returning the same percentage to the Democrat in both elections. 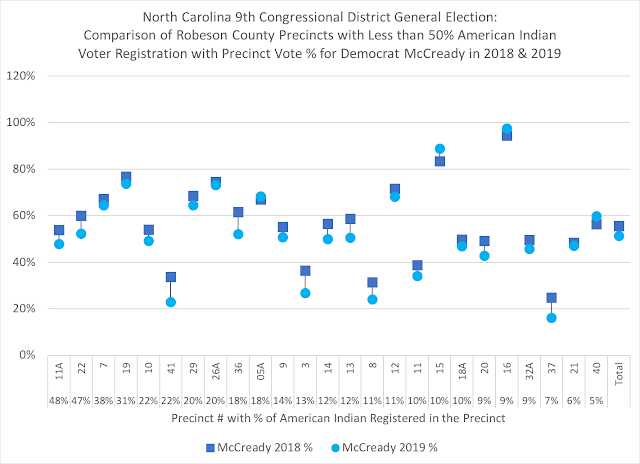 Republican Dan Bishop’s campaign made the Lumbees an obvious focus of their campaign strategy in this rural county, and that helped to squeeze out the tight margin of overall victory.


Bishop bear-hugged the President, But His Mecklenburg State Senate District Abandoned Him


While Bishop's campaign may have been making inroads into Robeson and other rural counties, his own state senate district voters abandoned their favorite son.

In comparing Bishop's state senate precinct returns in 2018 to what happened in those same precincts that are in the Ninth, Bishop's performance dropped considerably. In all of the Senate 39 precincts in the 9th, Bishop received an average of 54 percent of the vote, but in Tuesday's election, those same precincts only delivered 44 percent to the Republican, as demonstrated in this chart of the precincts and comparing the 2018 to 2019 Bishop vote. 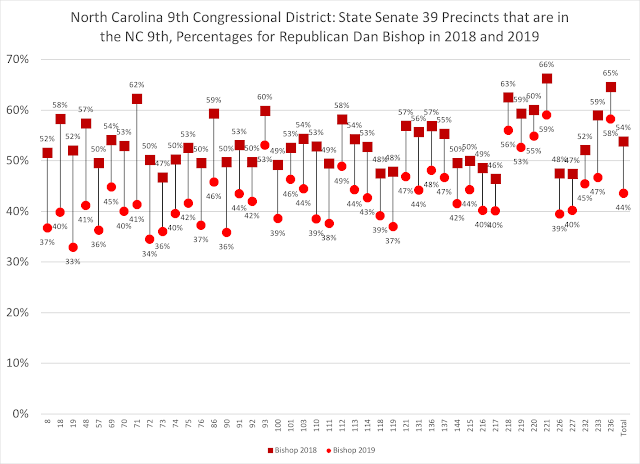 This simply reflects the continuing Democratic shift in south Mecklenburg, and should put the district up for grabs and a Democratic win in the next election to replace the now Congressman-elect.


Updates: What the Turnout and Electorate %s Tell Us As Well


With a little more time (and the media interviews starting to slow down), I had a chance to look at two more important data points: registered voter turnout and the county composition within the district's electorate.

First, registered voter turnout for the district was 37 percent, which I think was higher than anyone was expecting for a September odd-year election. But within the eight counties of the district, some notable differences in voter turnout is apparently: 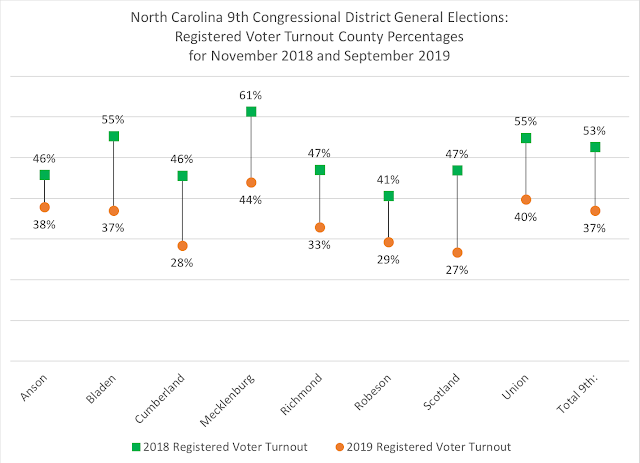 As a reminder, 2018's voter turnout rate was 53 percent, reflecting a huge increase in a North Carolina 'blue-moon' mid-term election. But in 2019, the two largest counties by voters, Mecklenburg and Union, had the highest turnout rates, at 44 and 40 percent respectively. Interestingly, where the president went for the Monday-evening rally, Fayetteville in Cumberland County, that county's turnout rate was the second-to-last, at 28 percent.

In looking at the composition of the district's 'electorate' (votes cast), again not a surprise that Mecklenburg and Union counties had the largest percentages of votes: 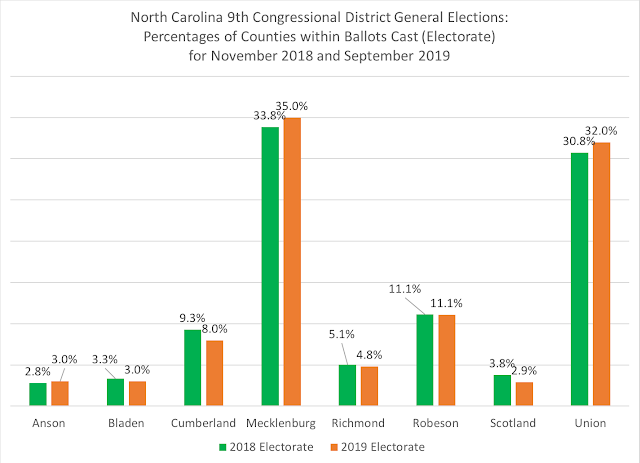 Over two-thirds, or 67 percent, of the votes in the 2019 election came from Mecklenburg and Union, slightly ahead of 2018's performance by the two counties of a combined 64 percent of the vote. Robeson County had the same share of votes in 2019 as it did in 2018, while Cumberland dropped a little over one percentage point. 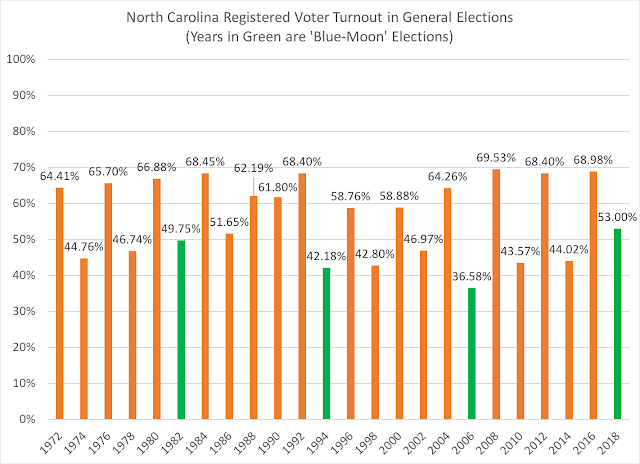 So what are the NC Ninth's key lessons?

What may have been key to Republican Dan Bishop’s is a multi-faceted campaign strategy: keep the suburban GOP stronghold of Union County (with 60 percent of the vote from a county that provided a third of the district’s vote), contain the growing defection in urban/suburban Mecklenburg County, where his state senate district was located, and focus on swinging the rural counties back from their Democratic performances just ten months ago.

Bishop achieved three critical campaign goals, but also saw a Democrat move a Trump 12-point margin district in 2016 to a two-point margin, just fifteen months out from the November 2020 election. With Donald Trump carrying the state in 2016 by less than 4 points, this should be a worrisome sign for national Republicans if a NC district moves that great against the president, and NC is needed in the electoral column for a White House re-election. In addition, his state senate district seems likely to be carried by a Democrat come the next election.

It's also important to note that next year's political climate will be very different from 2019, if for no other reason than North Carolina will likely see voter turnout in the high 60s rather than the 37 percent in the Ninth district this time around. Future analysis will focus on who showed up, once the voter history data file is updated in about a month.

But with this election, some canaries in the Ninth’s coal mine give a sense of continuity, and of the complexity, of this North Carolina district for 2020.
By OldNorthStatePolitics.com - September 12, 2019