Where Is The Uproar Over Charlotte's #RNC2020 Bid Coming From?

With the pending decision by the Charlotte City Council on whether to formalize the bid for hosting the Republican National Committee's 2020 Presidential Nominating Convention causing a great deal of controversy in the Queen City, it might be good to step back and see the transition that Charlotte has undergone, and continues to do so, in its political behavior and how its politics, especially at the presidential level, is playing out.

Thus, one can assign a "score" of plus whichever party in comparison to the party's national performance. For each presidential election since 2004, I have taken Mecklenburg County's precinct votes, compared them to each presidential performance, and then averaged the 2004-08, 2008-12, and 2012-16 results, with the following coding scheme:


So, taking the precinct results for the 2004 and 2008 presidential election and averaging them, one finds that Mecklenburg County, with the City of Charlotte's council districts in the yellow lines, to look like this: 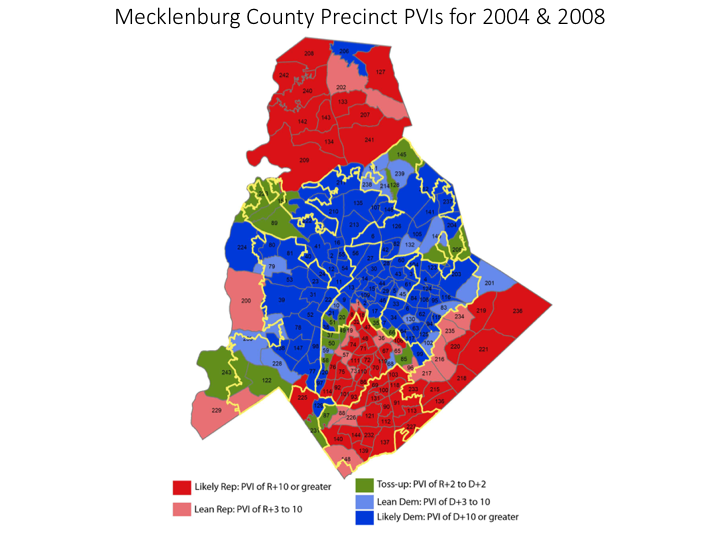 Now, notice a couple of key differences between this map and the one with the 2004-08 PVIs: 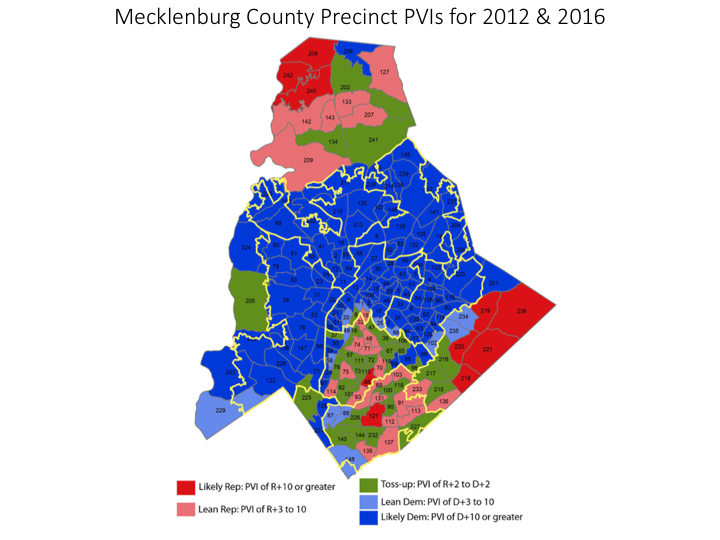 Note the following in this map:


To say that Charlotte has become a "Democratic" city is an understatement; just look at last year's mayoral contest to see it align more closely with its typically voting patterns in even-year elections. And with the Queen City becoming such a blue-dominated area, the reaction against having a candidate be renominated in a county that barely one-third of the voters cast their ballots for, is there any wonder why such an uproar is occurring?
By OldNorthStatePolitics.com - July 16, 2018