The Final NC Voting Data Has Been Released

Well, I know it's been a while since I've posted, but I needed some time away (and time to get caught up on my other jobs), but now that the North Carolina State Board of Elections has released some final data on voters, we can truly begin to dissect the 2016 electorate in the Old North State.

Much speculation was made leading up to the November 8 general election about what this year's NC electorate would look like, and with the dynamics of early voting presenting a whole new dynamic in the state, it was anyone's guess what the final picture would look like in the state.

I have another blog post awaiting posting at WFAE's The Party Line blog, but this will review some of the basic numbers and trends in the state's electorate within the past four presidential elections. 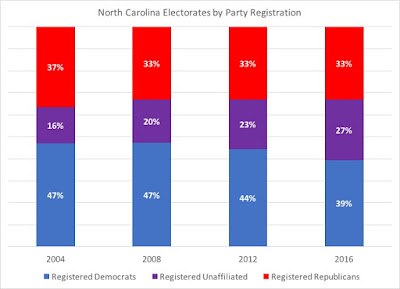 Both registered partisans have seen their percentages of the NC electorate drop since 2004, with Republicans holding at a third of the electorate, while Democrats have dropped below 40 percent this year, both due to the growth of unaffiliated voters, growing from 16 percent of the 2004 electorate to 27 percent of this year's electorate.

In looking at the NC electorates based on race, white voters have seen their percentages drop from 2004, with the question could Hillary Clinton's campaign be able to replicate the Obama coalition, especially the 2008 electorate that saw over one-quarter of voters as non-white and the 2012 electorate (that went for Romney) at 28 percent non-white. 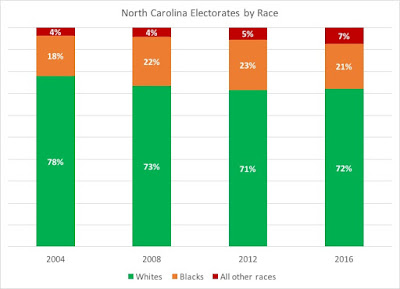 While 2016's electorate remained the same between white and non-white voters, the shift among non-white voters is interesting, with 'all other races' moving up to 7 percent while black voters dropped to 21 percent of the electorate.

Finally, in looking at the age categories within the NC electorate, the belief was that if younger voters would make up a similar amount as in 2008, Democrats would have an advantage in this year's election. 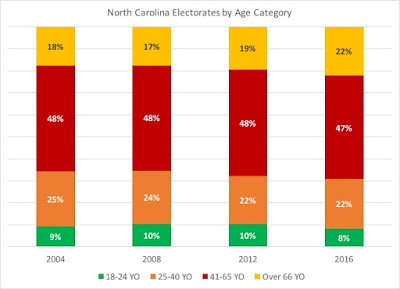 In 2016, 69 percent of the electorate was over the age of 41 years old, the largest of the past four electorates.

More analysis will be coming on various aspects of the North Carolina electorate in comparison to past presidential elections.
By OldNorthStatePolitics.com - December 29, 2016