What Influenced North Carolina's Vote on the Amendment?

In looking at the amendment vote across the state, we see some things that really shouldn’t surprise a lot of folks regarding the results, but then there are some aspects that, when you dig deeper in, are surprising.

First, we heard a lot about the controversy within the black community regarding the vote on the amendment defining marriage, in particular the split between social conservatism and civil rights.

In the counties with a black population of over 50 percent, support for the amendment was an average of 68%.  In these eight counties (Hertford, Edgecombe, Bertie, Northampton, Warren, Halifax, Vance, and Washington), voter turnout was at 36%, above the statewide average of 34%.

But what about the larger, urban areas, with pockets of minority voters in them? Did they vote like their rural counterparts?

Another difference between urban and rural black areas was voter turnout. Compared to the countywide turnout of 28% in Mecklenburg, majority-minority precincts had an average of 19% voter turnout.

More analysis will be needed, but the suspicion of a rural-urban divide seems to be more prevalent than the factor of race regarding the voting pattern on the constitutional amendment. I’ll be exploring more about that in later posts.

For now, what other factors may have influenced the vote for the constitutional amendment? With the aid of a statistical software program, I took the 100 county results for the amendment and ran several different factors that one would think would have some kind of effect on support for the amendment. 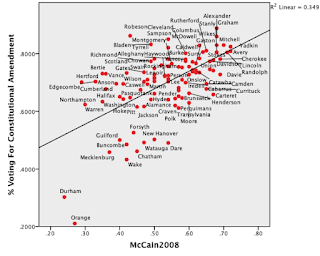 Figure 1: North Carolina County Vote for McCain in November 2008 and the County’s Vote for the Constitutional Amendment on Marriage in May 2008 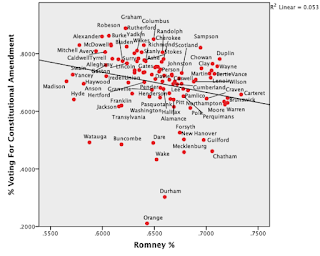 Well, there’s something: the more the county voted for Mitt Romney, the less likely it was to vote for the constitutional amendment.  Granted (for the stats geeks out there), the predictive power (aka, adjusted r2) is less than 5%, but this seems weird.

How about looking at the votes against Mitt? Would a county that cast more votes for the other Republican candidates (remember, Gingrich, Santorum, Paul, and “no preference” were still listed on the GOP primary ballot) show an increased amount of votes for the amendment? 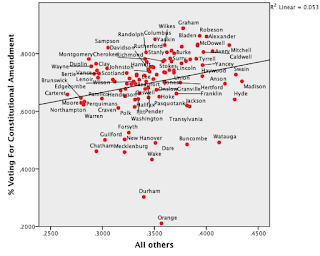 Figure 3: North Carolina County Support for “Anybody but Romney” in the May 2012 Republican Presidential Primary and the County’s Support for the May 2012 Constitutional Amendment on Marriage

It appears that perhaps Republican support for the party’s presumptive nominee hasn’t quite solidified around Romney, as indicated by the fact that, statewide, one-third of Republican primary voters voted for someone other than Romney.

In the 63 counties that cast more than 33% against Romney in the GOP presidential primary, the average level of support for the constitutional amendment was 72%, nearly 11 points higher than the statewide result of 61% support.  And these counties, on average, voted 55% for John McCain in 2008 and has (again on average) 33% registered Republican voters—a sign perhaps that, in some key counties, the base of the Republican Party hasn’t been sold on Romney’s candidacy quite yet.

So, would the percentage of registered Republicans in a county have any indication of the level of support for the constitutional amendment? 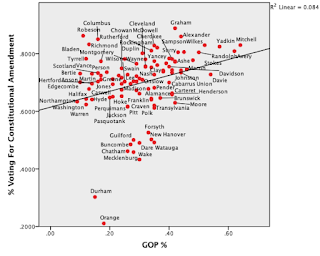 Figure 4: North Carolina County Percentage of GOP Registered Voters and the County’s Support for the May 2012 Constitutional Amendment on Marriage

It would appear that as a county’s percentage of registered GOP voters increased, so to did support for the constitutional amendment. No real surprise there. But what about a county’s Democratic and unaffiliated registered voters?

In counties where the percentage of registered Democrats increased, there seemed to be a slight decline in support for the amendment. 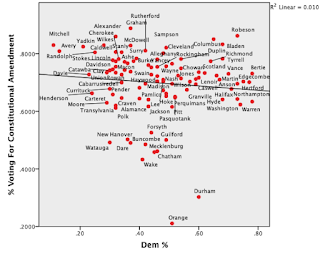 Figure 5: North Carolina County Percentage of Democratic Registered Voters and the County’s Support for the May 2012 Constitutional Amendment on Marriage

In areas that saw increased percentages of registered unaffiliated voters, the trend was also more pronounced in voting against the amendment. 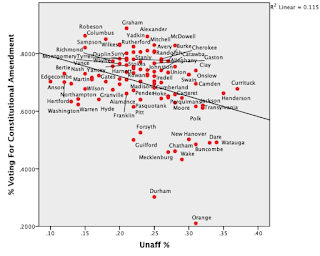 Figure 6: North Carolina County Percentage of Unaffiliated Registered Voters and the County’s Support for the May 2012 Constitutional Amendment on Marriage

One final analysis that I ran was the most surprising of them all. Since President Obama did win the Democratic presidential primary, he did pull only 79% of the support of Democrats and Democratic-unaffiliated voters in the state, with nearly 21% of the ballots cast expressing “no preference.” If one was to read that as a vote against Obama, what might have been the trend when voting for the constitutional amendment in comparison? 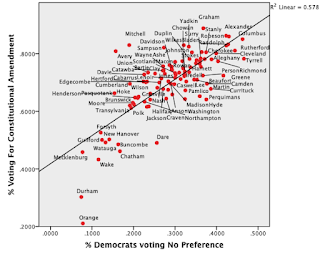 Figure 7: North Carolina County Percentage of Democrats Voting “No Preference” in the Presidential Primary and the County’s Support for the May 2012 Constitutional Amendment on Marriage

With a whooping r2 of 57% (meaning, that 57% of the vote for the constitutional amendment could be explained by the Democratic “no preference” vote), this is the most surprising of the county-level analysis that I’ve seen: as counties voted more “no preference” against their presidential nominee (the president), the support for the constitutional amendment rose.

I’ll be looking at more of the internal party races in the next few entries, but seeing how these results line up against the upcoming general election will be some more fascinating analysis to look at.
By OldNorthStatePolitics.com - May 17, 2012