Revisiting Whether It's Politics or Economics That Impacts a County's Vaccination Percentage?

Recently, the New York Times reported an analysis that showed that in counties that voted overwhelmingly for Trump (70 percent or greater) "the virus has killed about 47 out of every 100,000 people since the end of June," compared to 10 out of 100,000 in those counties that voted the reverse (less than 32 percent for Trump).

First, a scatterplot of the county full vaccination percentage against Trump's county vote: 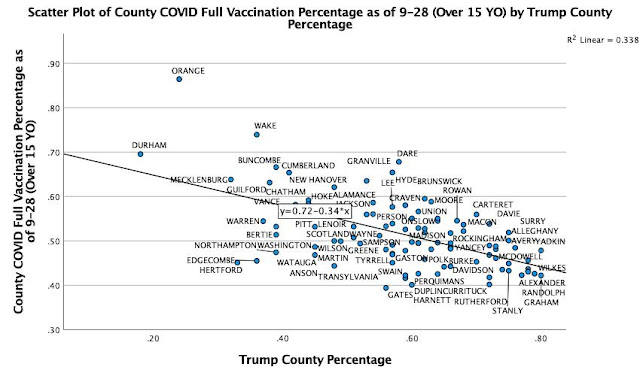 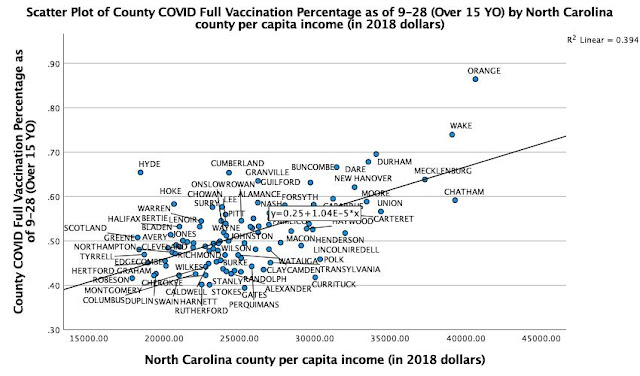 Again, running a linear regression with just the per capita income, the adjusted r-squared value came to 0.387, compared to July's 0.422.

However, when I dropped all of the variables except for the two main ones (Trump and per capita income), the adjusted r-squared was 0.595. Only a further slight drop in explanatory power, but with only two variables now, a remarkable difference.

To sum up what we are seeing in terms of explanatory power (the adjusted r-squared values) for the July and now the end of September analyses for all 100 NC counties and their vaccination percentages:

Using the analysis reported in the New York Times (those counties with over 70 percent Trump support and below 32 percent), I looked again at the scatterplots of those counties.

Now, a statistical word of caution: for this analysis, the number of N.C. counties goes from 100 down to 26, something that most statistical analysis would say "you really should be careful in assuming such a small 'n' (number of units of observation) with this analysis."

With that caveat, here's the scatterplot of per capita income against the 26 counties: 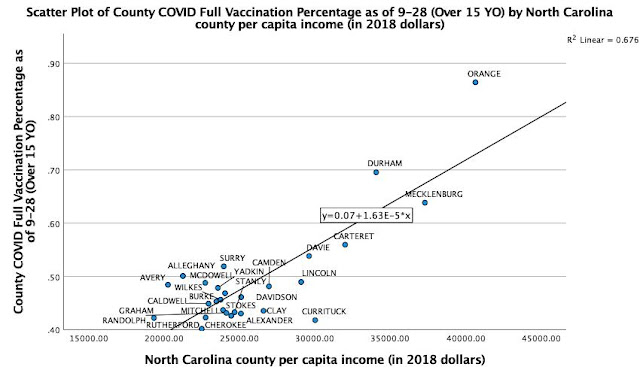 The r-squared value shot up to 0.676, meaning that potentially two-thirds of the full vaccination percentage in those 26 counties could be explained by the per capita income.
But when it came to the Trump county vote scatterplot for the 26 counties: 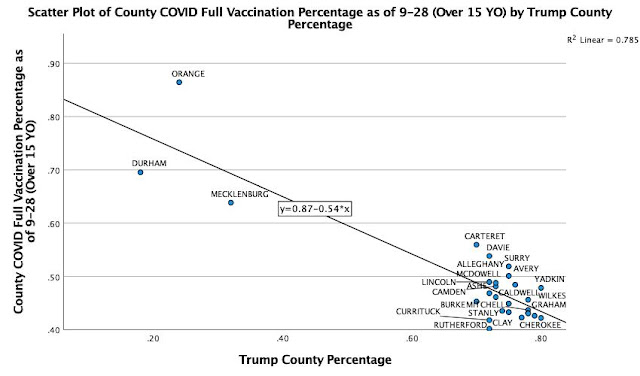 The r-squared value went up to 0.785, meaning that nearly 80 percent of the full vaccination rate in the 26 counties could be explained by the county's Trump percentage in 2020's election.

In fact, when running the linear regression with just the two variables, the per capita income rate drops out of statistical significance (at 0.089), while just using the Trump variable again had an adjusted r-squared rate of 0.776.

Thus, in those 26 counties, the single variable of Trump's 2020 vote percentage explains three-quarters of a county's full vaccination rate.

Of course, there are likely other explanations for the dynamics going on at this point in the pandemic. We'll need to continue to watch the dynamics of COVID vaccinations in the counties, but almost three months after the initial analysis, it appears that overall, North Carolina's county Trump vote percentage is becoming a better 'explainer' of a county's vaccination percentage.

--------------------
Dr. Michael Bitzer holds the Leonard Chair of Political Science and is a professor of politics and history at Catawba College. He is the author of the recently-published Redistricting and Gerrymandering in North Carolina: Battlelines in the Tar Heel State. He tweets @BowTiePolitics.
By OldNorthStatePolitics.com - September 29, 2021