As with many things nowadays, partisanship and polarization has infected many aspects of our society; not just our political lives, but things that 'normally' one might consider apolitical. With the intensity of what we see in our polarized environment, pretty much any issue, especially those seen as a public policy, becomes framed in partisan dimensions.

Recently, political scientist Seth Masket at the University of Denver noted that the relationship between how a state voted in the 2020 presidential election and its percentage of adults who have received at least one COVID vaccine is "remarkably strong," at a level of 0.85 correlation which is something social scientists "almost never see this high a correlation between variables." This relationship was also found by another political scientist, Tom Pepinsky, regarding county-level data.

In fact, Masket found that vaccination rates are a "better predictor" of state voting patterns than what we normally think of as predictive (read, in statistical language, independent) variables such as race, education, or other demographic factors.

Beyond just analyzing the fifty states, Masket analyzed Colorado's counties to evaluate the role of vaccination and voting patterns in 2020, and found another remarkable correlation/relationship between the two (at 0.835, where a 1.0 would mean the two variables are identical in their relationship and that one variable perfectly explains the other variable).

For those of us who study state politics and are interested in a particular state, this type of analysis is fairly simple: take the 2020 county-level election results (say, the 100 counties of North Carolina and their vote for Trump) and the vaccination rates by counties and see how the two numbers relate to each other.

One simple approach is conducting a scatter plot, where the chart's x horizontal axis is the county's vote percentage for Trump with the y vertical axis as the county's vaccination rate.

While a county's Trump vote percentage is pretty much set in election returns, the vaccination rate data can either come from the CDC (which Masket and Perpinsky utilized) or from a state's health department (the NC Department of Health and Human Services (NC DHHS)).

For the latest data, I used the NC DHHS data for June 29 to analyze against the Trump vote percentage for all 100 NC counties. To arrive at a county's full vaccination percentage, I used the CDC's Population Estimates for those 15 years or older in 2019 and divided the number of full vaccinations (that is, both shots that were delivered by North Carolina and the federal government) into the county's population.

So, taking the two sets of numbers, here is the scatter plot of each NC county with its Trump vote percentage against the full vaccination percentage. 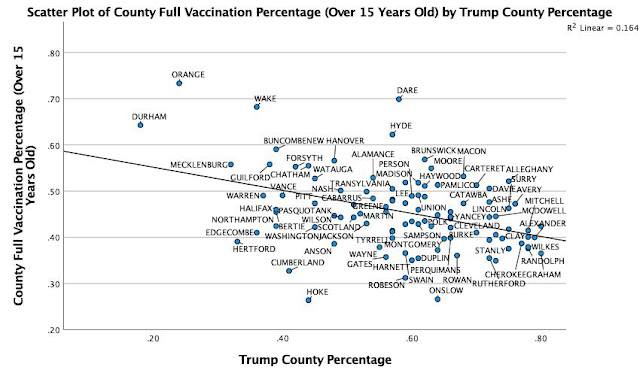 Notice that, in general, as "Trump County Percentage" increases along the x axis, the "County Full Vaccination Percentage" generally decreases along the y axis. For example, Vance County (on the left side of the line) gave Trump 40 percent of the vote and has a full vaccination rate of nearly 50 percent, while on the right end of the line, Alexander County gave 79 percent of its vote to Trump, but has a full vaccination rate of 40 percent.

Thus, a negative relationship between Trump's vote percentage and a county's full vaccination percentage, something the national and Colorado analyses demonstrated.

Yet there's one other notable aspect: notice how spread out the counties are in comparison to the line drawn in the scatter plot. And in the upper-right corner, the R squared linear value is only 0.16, which means that Trump's county percentage only explains 16 percent of NC's county's vaccination percentage.

Notice a few "outliers," or counties that are furthest from the line in the upper-part of the chart: Durham, Orange, and Wake counties have higher vaccination rates than their Trump county percentage would have estimated. But two other counties stand out: Dare and Hyde. More on that later.

Using this scatter plot analysis demonstrates what might be a linear regression between the two measurements. In running a regression analysis, we can see how much the Trump County Percentage (what is called an independent variable) explains the County Full Vaccination Percentage (the dependent variable). Here's that analysis ("model"); notice several colored boxes that highlight some important aspects. 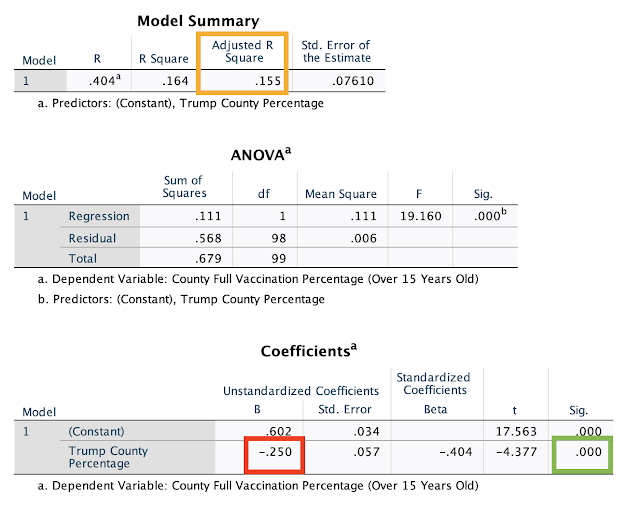 First, at the top, the orange box indicates an "Adjusted R Square" value of 0.155, which is a further refinement of the statistical relationship between the two measurements and indicates how much of the County Full Vaccination Percentage is explained by the Trump County Percentage. In this case, only 15.5 percent of a county's vaccination percentage is explained by Trump's county vote percentage.

That's considerably less than what others found. More on that in a moment.

The other two boxes at the bottom--the left-side red and the right-side green--show two other important statistical measurements. The -.250 in the red box indicates what the predictive value of Trump County Percentage is on the County Full Vaccination Percentage, which indicates a negative relationship (meaning, the higher the Trump vote in a county, the lower the vaccination percentage).
So, plugging in Vance County's 40 percent Trump vote into the equation "0.602 (Constant) + (-0.25 x 0.40)," we get a predicted vaccination rate of 50 percent for Vance, while Alexander's 79 percent for Trump (again, 0.602 + (-0.25 x 0.79)) gives a predicted vaccination percentage of 40 percent.
This negative relationship was shown in the other analysis as well, and the fact that the Trump County Percentage is statistically significant (as indicated in the green box at .000, with anything under 0.05 generally considered significant), says that Trump's influence is important to explaining a county's vaccination percentage.
So, we have good news and "not-so-good" news for trying to explain NC's vaccination percentages: yes, Trump's county vote does have an influence, but it may not be as explanatory for North Carolina's vaccination percentages as we might expect.

Could other factors (variables) be influencing the County Full Vaccination Percentage? Most likely, and here's where I started to consider other factors.

Here's the scatter plot using per capita income (in 2018 dollars) for each NC county to show what kind of relationship there is with the vaccination percentage. 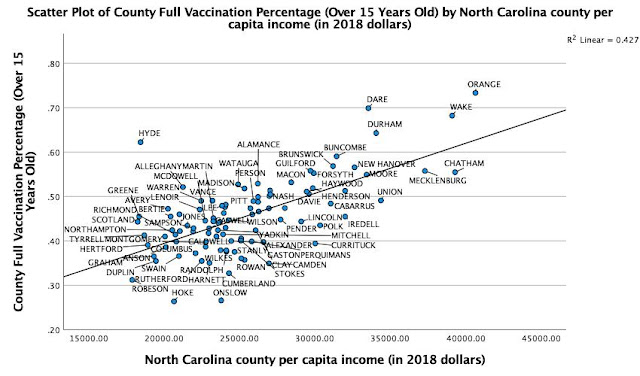 Not surprisingly, as a county's per capita income rises, so does the vaccination rate. And this time, the R squared value is at 0.42, much higher than the value with the Trump vote percentage.

Running the linear regression analysis for just per capita income, we find the adjusted R squared value (orange box) at 0.422 (meaning, per capita income explains 42 percent of the vaccination percentage in a county). 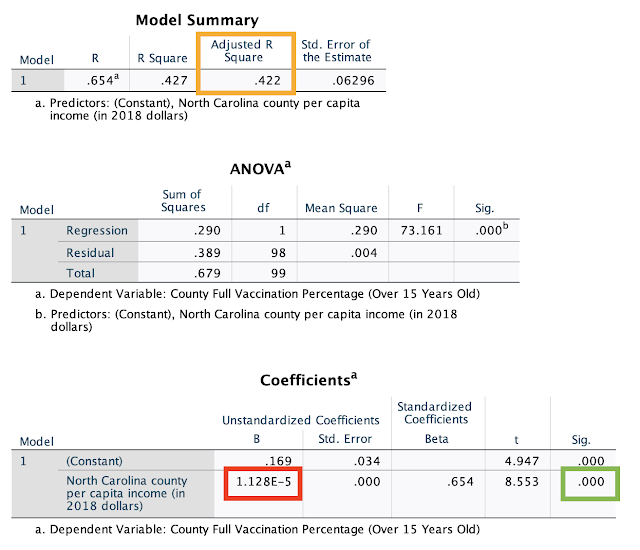 Next, I combined the two factors--each county's Trump vote percentage and per capita income--to see what might be explained. 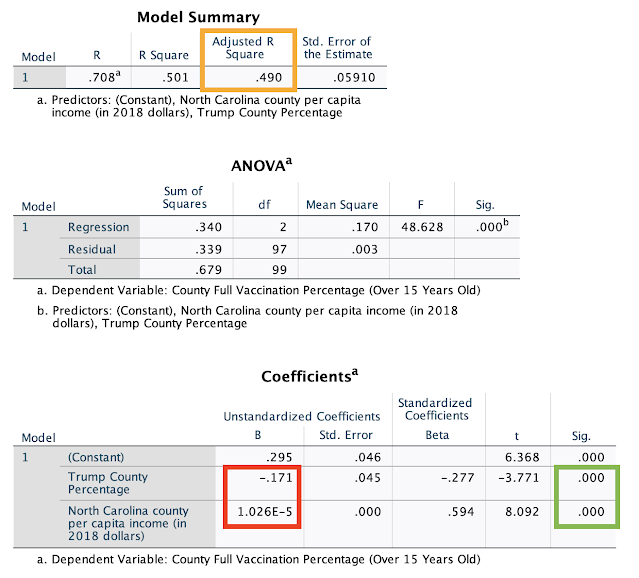 With both Trump percentage and per capita income, nearly half--49 percent--of a county's full vaccination percentage (adjusted R squared value) can be explained, and both are statistically significant and are in their respective "right directions" when it comes to their effect (Trump's county vote negative, while per capita income is positive).

Could there be other factors that influence a county's full vaccination percentage? Most likely, so I decided to plug in each county's data for the following:

In analyzing the impact of the six factors (independent variables) against the county's full vaccination percentage, we find the following key results: 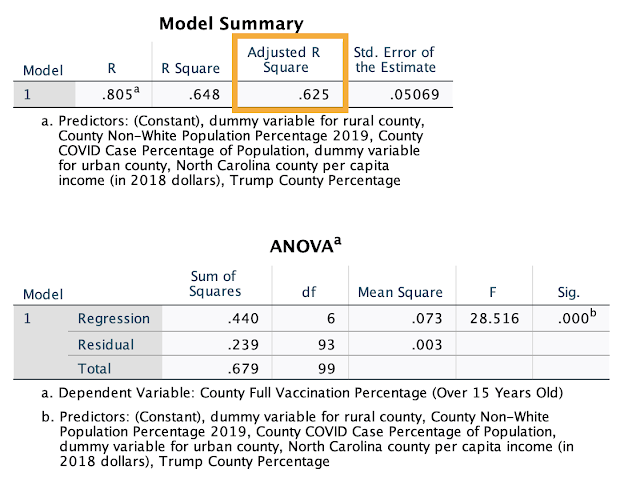 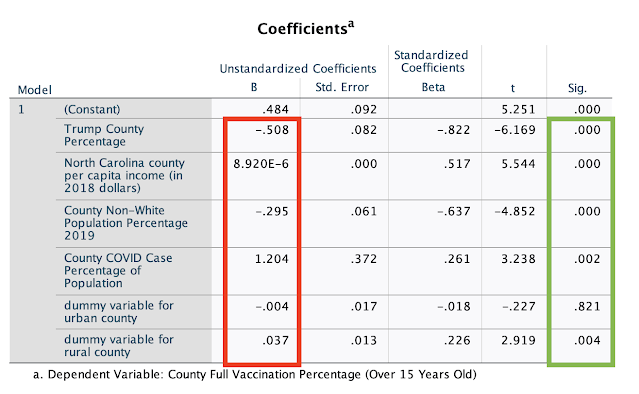 This last variable, the impact of rural counties, is intriguing and seems counter-intuitive, since the convention thinking is that rural counties have lower rates than other counties. But as Chris Cooper indicated to me, a county's prison population (and the vaccination drives for those) having some impact on a rural county's vaccination percentage, as this map from the NC Department of Public Safety shows a greater presence of prisons located in rural counties.

The non-White percentage may demonstrate a potential vaccine-hesitancy among minority groups, which may be a "wait and see" dynamic at play. Perhaps another few month's of data would show a potential decrease in that factor.

To go back to some outlier counties, an interesting case study would be rural Hyde County, which in both its Trump vote percentage and per capita income shows the county to be an outlier in terms of its vaccination percentage. Perhaps there may be some special dynamics at work in that county that perhaps other counties could learn from.

At least in North Carolina, Trump's county vote seems to have an impact on the county's full vaccination percentage, but it is one of several factors that contribute to a county's vaccinations so far.

Dr. Michael Bitzer holds the Leonard Chair of Political Science and is a professor of politics and history at Catawba College; he tweets at @BowTiePolitics.