Summer Ends, The General Campaign Begins, and a Look at NC's Voter Pool

With only 1,311 voters shy of 7 million, North Carolina begins the general campaign into the 2018 mid-term elections with a continued strong showing of younger voters and the rise of the unaffiliated registered voter.

As of September 1, 2018, the state's registered voter pool (active and inactive) breaks down as follows: 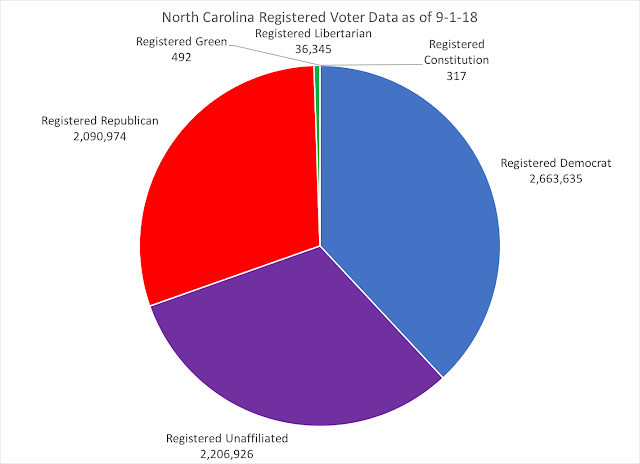 During 2018, the monthly totals of new registered voters show a decidedly "younger" tilt, with voters of the Millennial and Generation Z cohorts (those under the age of 37) dominating the monthly totals, and through August 31, constituting 58 percent of 2018's new voters. 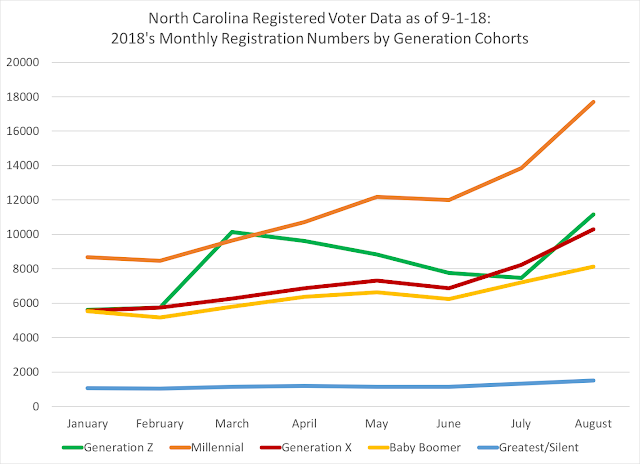 And by monthly percentages: 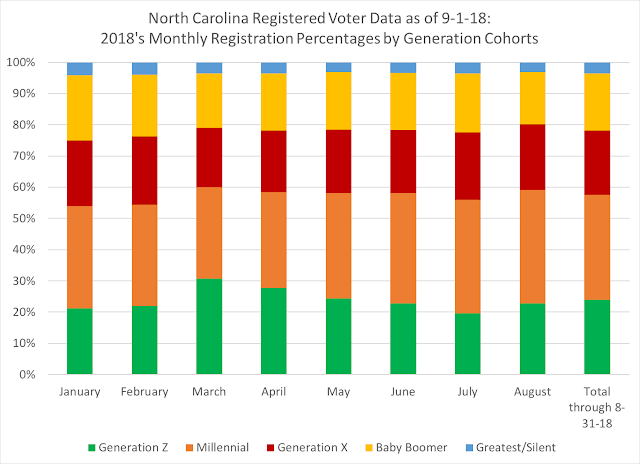 In March, Generation Z (those under the age of 21) topped their Millennial counterparts, but Millennial voters retook the plurality lead and continued their domination of the monthly totals for seven of the past eight months.

Of the total numbers of each generation by party registration, a distinctive pattern has continued in the state's voter registration figures: 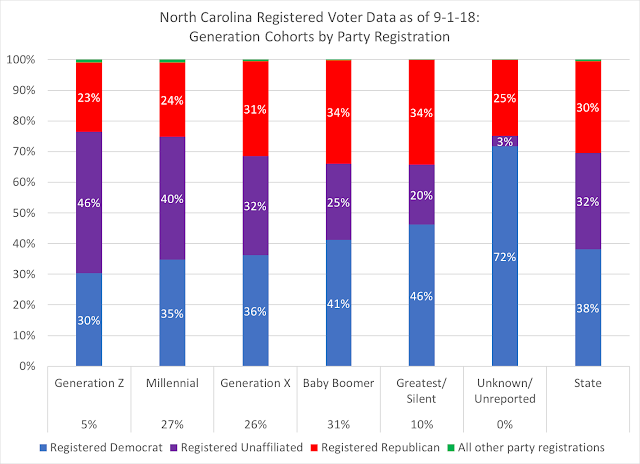 Nearly one-third of North Carolina's registered voters are under the age of 37, with significant pluralities of both Millennials and Generation Z members registering as unaffiliated.

As a result of these younger voters, the monthly percentages by party registration demonstrates the significant numbers of unaffiliated registrations in 2018 so far: 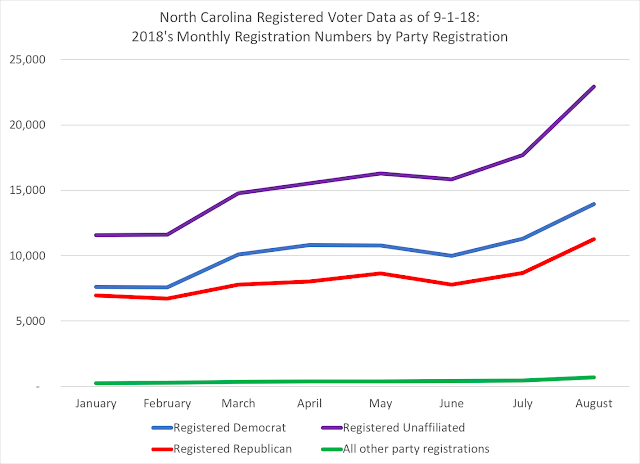 And by each month's percentages: 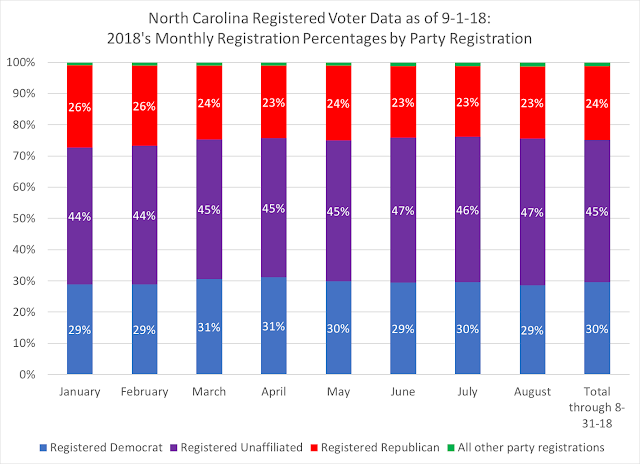 In looking at each major party registration by its generational cohorts, this dominance of younger voters in the unaffiliated camp is striking: 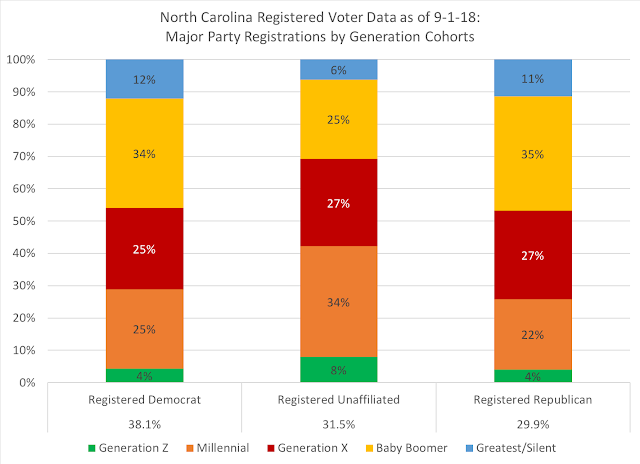 In looking at North Carolina's urban/suburban/rural counties, the party registration figures again show a distinct difference among these three regions: 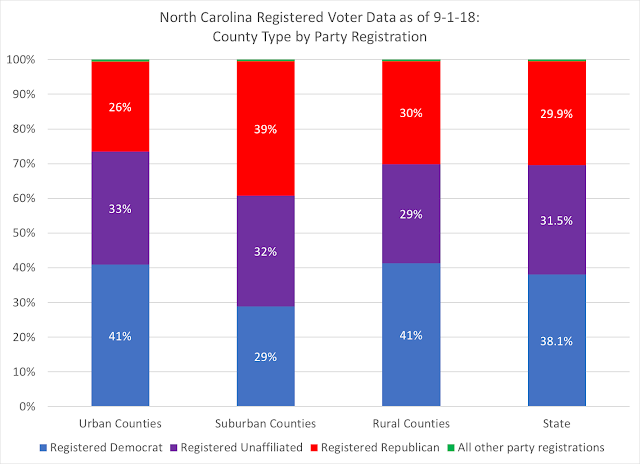 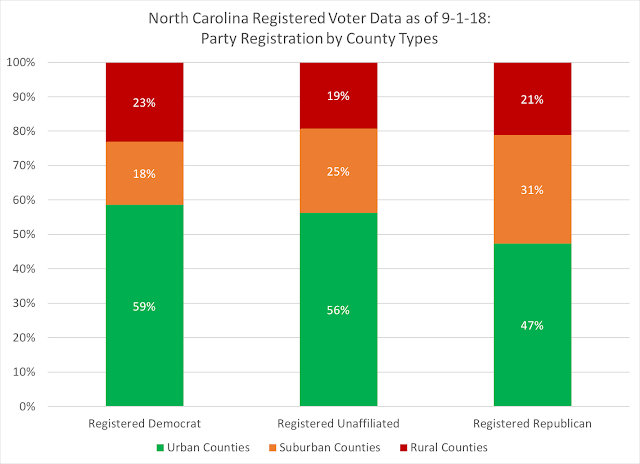 Nearly sixty percent of all North Carolina registered Democrats are in urban counties, while 52 percent of NC registered Republicans are in suburban and rural counties.

If one were to split urban counties in their "central city" area and the outlying "suburbs" within that urban county, thus creating 4 categories of regionalism in the state, then an interesting pattern appears in North Carolina's 'suburbs': 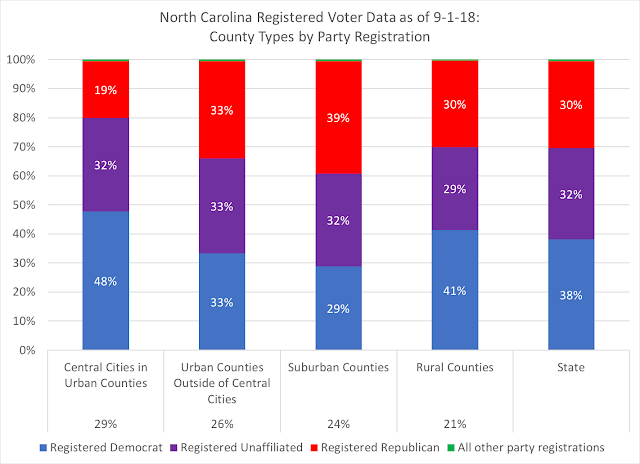 Finally, in looking at voters' race and their party registrations: 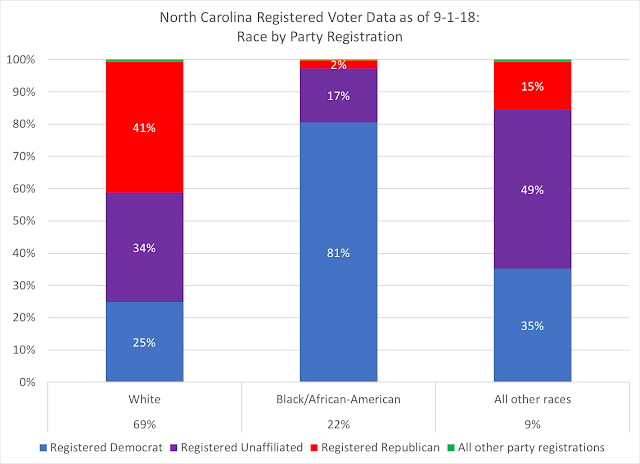 Non-white voters are closing in on being one-third of the state's voter pool: while black/African-American voters continue to be significantly Democratic in their registration, younger members of that racial category are leading the unaffiliated rise, just as all other races (Asian, Native Indian, other races, and multi-racial voters) are nearly 50 percent unaffiliated.

And by each of the three major party registrations and the racial composition of each: 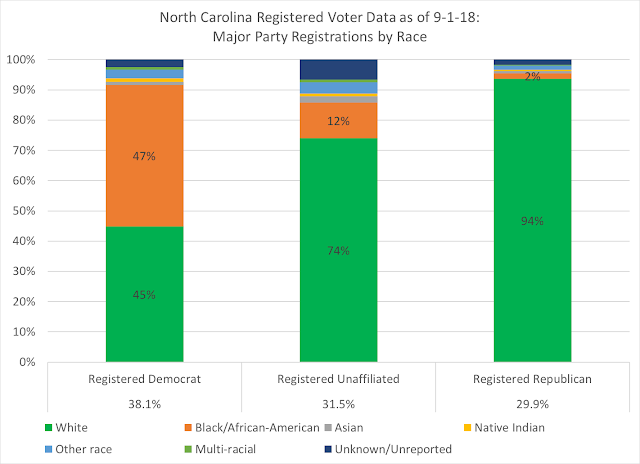 Registered Democrats are a majority-minority registered party in the state, while registered Republicans are 94 percent white; barely three-quarters of unaffiliated voters are white.

While we should expect the state's voter pool to top 7 million by the time November's election rolls around, much of the dynamics surrounding the voter pool and the characteristics of it are pretty much locked in for the mid-terms. The question becomes: which side will target and bring their registered voters out, once early voting (both mail-in and in-person) commences towards the November election day?
By OldNorthStatePolitics.com - September 06, 2018